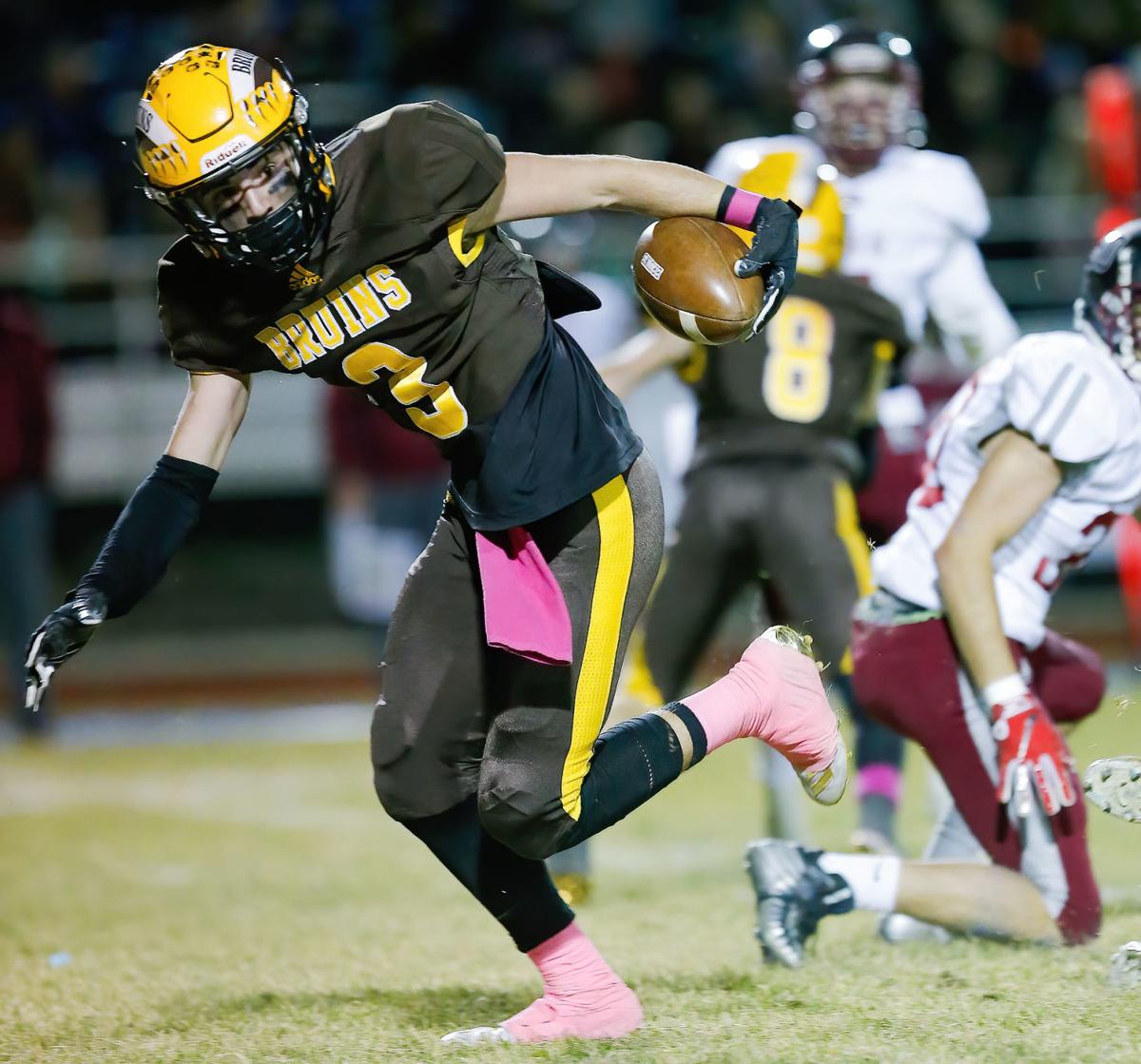 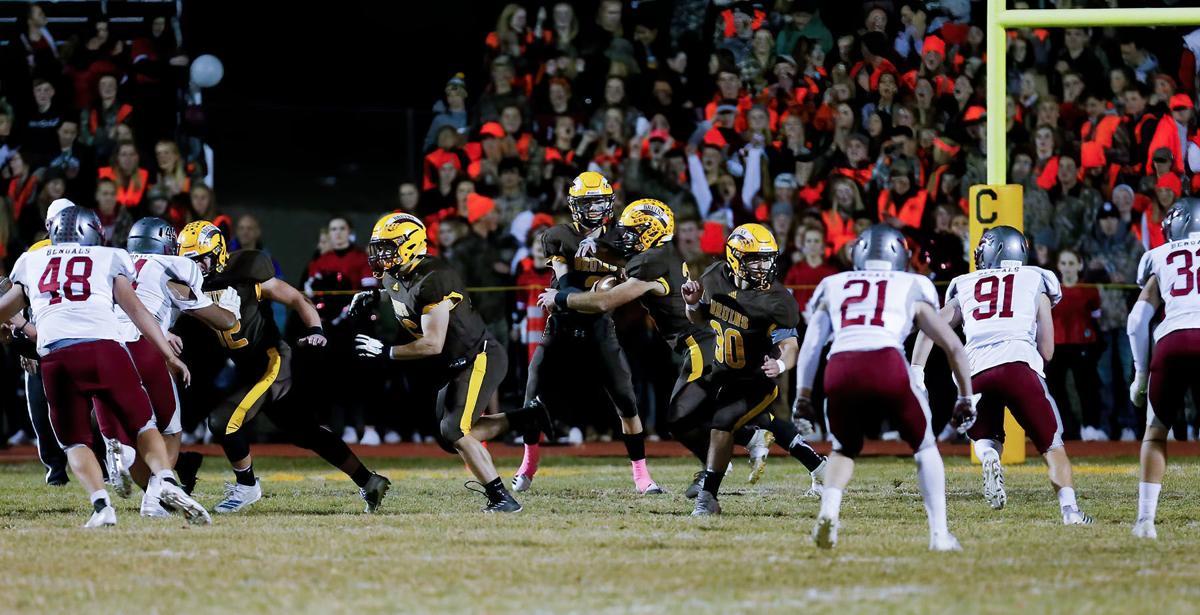 Helena Capital’s Bridger Grovom hands off to Parker Johnston during Friday nights crosstown game against Helena High. The Bruins held on to defeat the Bengals 7-6. 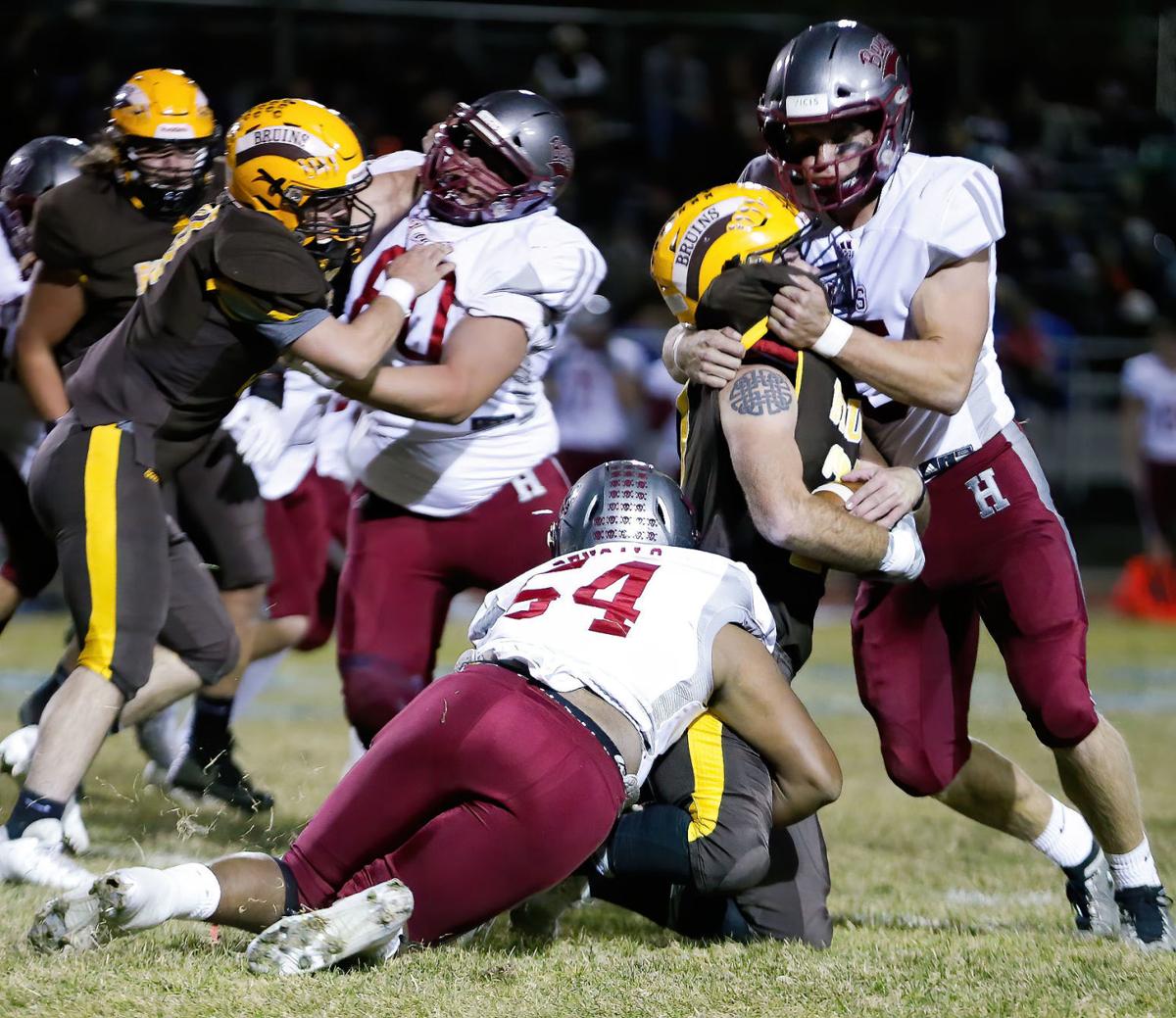 Helena Capital’s Bridger Grovom hands off to Parker Johnston during Friday nights crosstown game against Helena High. The Bruins held on to defeat the Bengals 7-6.

HELENA --- Defensive lineman aren't really known for making interceptions. But Friday night, Monte Pearson made one that he will never forget.

With his Helena Capital Bruins clinging to a 7-6 lead and crosstown rival Helena High driving for a go-ahead score, Pearson, a senior defensive end got his hand on a Hayden Ferguson pass, tipping it up into the air.

Then, the defensive end was able to come down with the interception that proved to be the clinching play in the Bruins 7-6 win during the crosstown game at Vigilante Stadium.

MONTE PEARSON!! INT. That may be the dagger! Bruins ball. #mtscores pic.twitter.com/VOzXoJkzdf

"I just got my hands up and I was lucky enough to see it," Pearson said. "It feels great right now. Everyone on the sideline lost it."

"He's a good player," Johnston said of Pearson. "Actually, he's a great player. They had a wide open guy up the chute, so luckily he got a hand on that ball because it might have been a touchdown."

Kyle Mihelish, head coach of Helena Capital, said his defense wasn't lined up right on the fateful play, but it didn't matter, thanks to Pearson's effort.

"We were aligned incorrectly," Mihelish said. "And then Monte does a great job. It's kind of funny when you work on things during the week. (Kaden) Huot does a great job of getting the ball out quick, so we worked on getting our hands up and that's just a great play by Monte."

Asked about the degree of difficulty on that play, Mihelish said, "I guess, piece of cake."

The Pearson interception was one of four turnovers forced in the game by Capital and the third of the second half. Three of the four turnovers Helena High committed came inside the Bruins 30, as they were driving to score.

"I thought our defense played well," Mihelish said. "It was a hard-fought game and it was two teams going at it. The kids responded and they played well."

The Bruins defense played well for the final 47:30 anyways.

That's because just a few plays into the game, Bengals running back Logan Brown broke out for a 64-yard touchdown run, giving Helena High a 6-0 lead. The PAT was blocked and that point would loom large later.

"It was very exciting," Brown said. "I was hoping that we would be able to pull it out, but we had too many costly mistakes. Otherwise, we could have come out on the other end."

Even in defeat, Brown, a senior, had a special night. In addition to his touchdown and 72 yards rushing, he also caught nine passes for 108 yards.

Yet, the biggest catch of the night came from Johnston.

After a Helena High fumble late in the first quarter, Capital got the ball in its own territory and quickly advanced it to the Bengals 48. That's when Johnston struck with one of the big plays he's so accustomed to making.

The wideout caught a slant pass, then broke out of two tackles and scampered 48 yards for a touchdown to tie the game as the first quarter ended. The extra point by Ryan Quinn proved to be the difference.

"That's definitely the coolest play I have ever had," Johnston said. "I kind of stepped on the kid's stomach and I felt bad, but luckily, I was able to break free."

"Parker is a consistent player," Mihelish said. "And you need your big-time players to come out and play big for you and he does that every week."

Johnston's touchdown came with 36 minutes left in the game, however, it ended up being the final score.

Helena High had a number of chances, but time and time again, the Bruins defense turned the Bengals offense away.

Another critical stop came midway through the third quarter, when Helena was again in red zone, only to see the drive come up empty after an interception by Alex Barker.

Barker with the INT! Bruins ball at own 34. pic.twitter.com/J71ieM1aUS

"It's just great to see all the kids respond to being in that situation," Mihelish said. "They found a way to get through it and get a win."

Of course, the outcome could have been very different if not for a heads up play by Quinn in the first quarter.

With the ball near his own goal-line, Quinn, the punter too, had the ball snapped over his head. Yet, just when it looked like he might get tackled for a safety, he avoided two tacklers and got a punt off, saving Capital at least two points, maybe more.

"He's an athletic kid," Mihelish said. "I thought he was probably going to step out for a safety. But he somehow flipped around and go it out to about the 50 yard-line. That was a big play."

While Helena Capital wound up with just 185 yards of total offense, it ended up being enough to win. Grovom was 8-of-17 for 95 yards, with one touchdown and one interception.

Johnston caught three passes for 64 yards and Kadyn Craigle had a good night on the ground, carrying it 19 times for 93 yards.

The win improved Capital's record to 7-2 and clinched the No. 3 seed for the Bruins. Helena High (5-4) will wind up fourth after Missoula Sentinel beat Glacier, meaning both teams will host a first-round playoff game.

"I am just really proud of these kids," Mihelish said. "We controlled our own destiny for the three seed, we set a goal and then we went out and did it. It gives us momentum but the tournament is the tournament, we have to be ready for everybody."

See what you may have missed from the final week of the regular season.