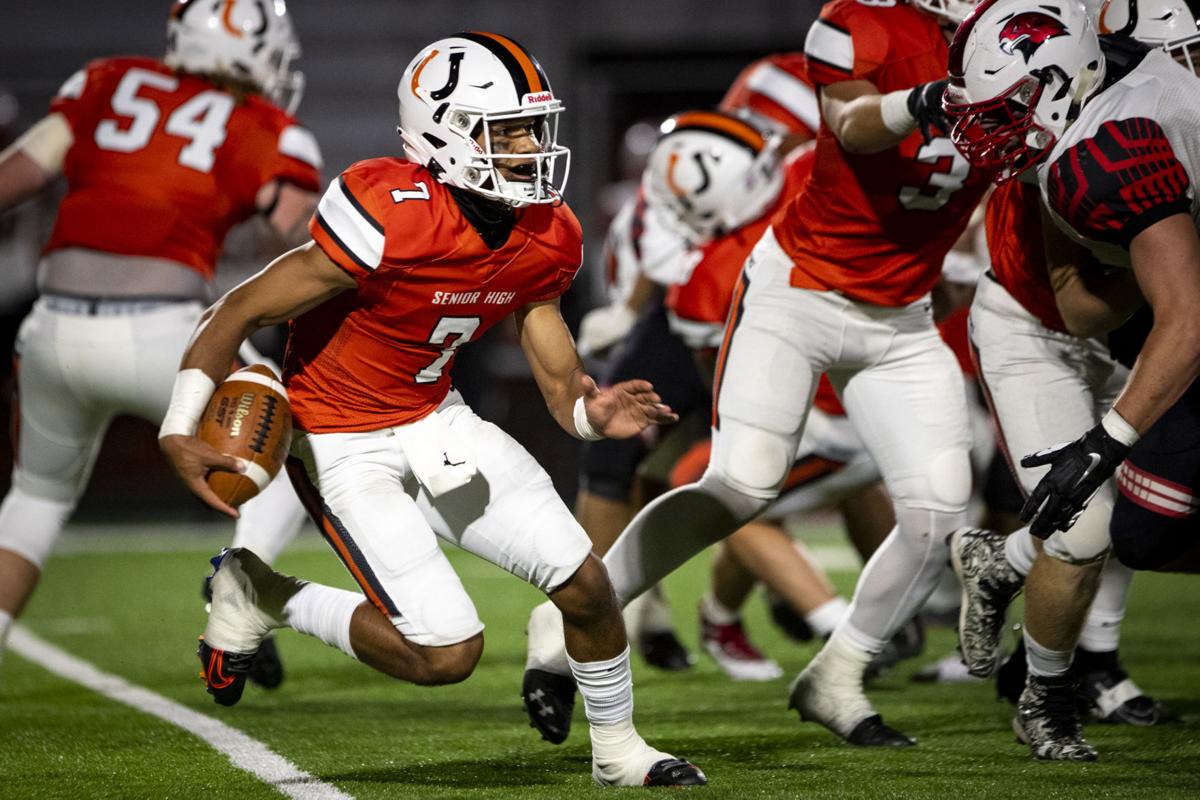 Billings Senior's Junior Bergen runs the ball against the Bozeman Hawks at Wendy's Field at Daylis Stadium on Thursday. 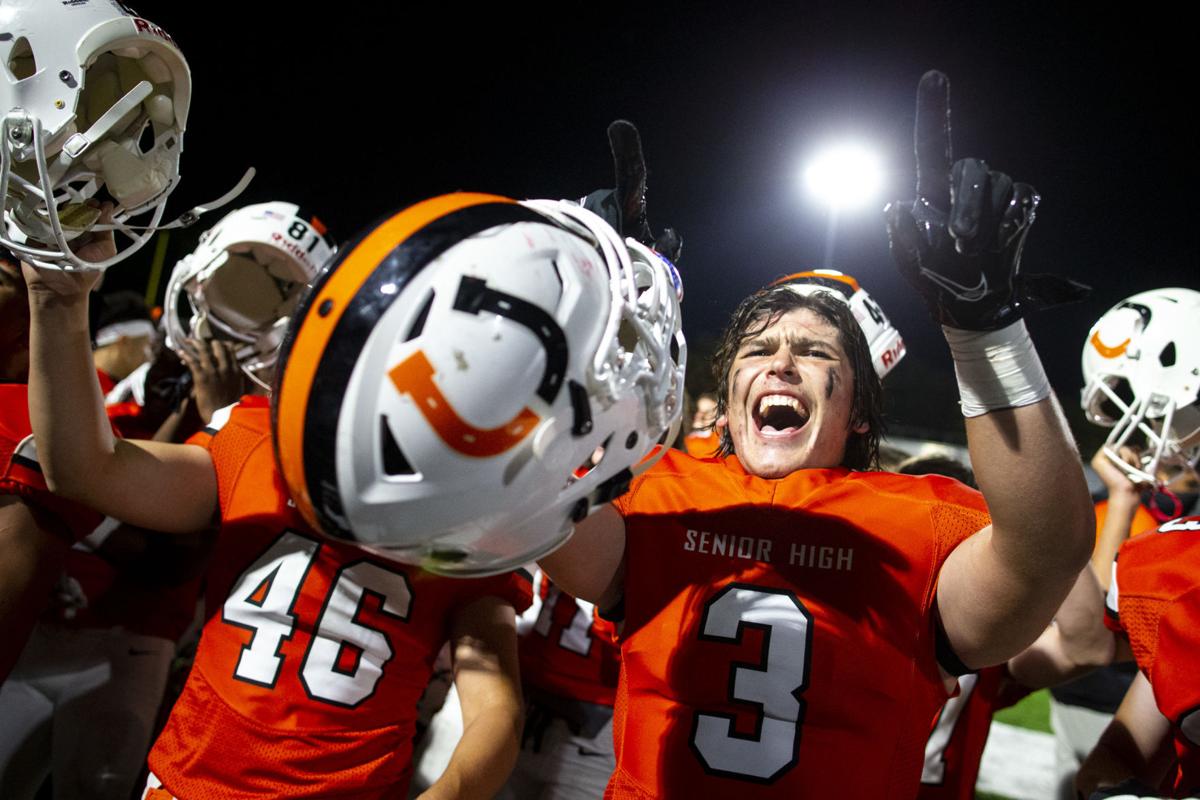 Billings Senior's Michael Ohlin (3) cheers with his teammates after the Broncs beat the Bozeman Hawks at Wendy's Field at Daylis Stadium on Thursday.

Billings Senior's Junior Bergen runs the ball against the Bozeman Hawks at Wendy's Field at Daylis Stadium on Thursday.

Billings Senior's Michael Ohlin (3) cheers with his teammates after the Broncs beat the Bozeman Hawks at Wendy's Field at Daylis Stadium on Thursday.

BILLINGS — Payton Morton wasn’t out there to provide a pick-me-up. The Billings Senior linebacker just wanted to make plays.

Intentional or not, Morton injected a sense of urgency into the Broncs with strip-sacks on his first two defensive possessions, setting up two Senior scores in a 34-13 Class AA football win over defending champion Bozeman Thursday night.

Receiver-turned-quarterback Junior Bergen had a hand in four touchdowns, and Jacob Miller rushed for 165 yards for the Broncs, who scored on their first two possessions and never looked back.

Morton forced a third-down fumble on Bozeman’s game-opening possession, which led to a punt, and he did the same the second time Bozeman had the ball. Senior’s Jaden Perkins plopped on the ball that time, and the Broncs quickly had a 13-point lead over the Hawks.

Sure, the adrenaline was pumping for both No. 4 Senior and No. 2 Bozeman as they opened the Class AA season, even if Thursday night’s crowd was smaller and less boisterous than usual.

Efforts to minimize the spread of the novel coronavirus meant limited spectators — and no student section other than those that gathered outside the north fence — at Wendy’s Field at Daylis Stadium. So if there wasn’t enough inspiration from the home fans from which to draw upon, Morton gave everyone in orange a little jolt with his early play.

“Payton always gets us fired up, whether it’s game day or practice,” Senior coach Chris Murdock said with a chuckle about his 5-10, 215-pound linebacker. “He definitely brings a lot of energy. Anytime he’s out there making plays it gets everybody pumped up for sure.”

The Broncs should be pumped up about Bergen’s play, as well. An all-state receiver previously, Bergen said he and Murdock had discussed the possibility of him playing quarterback when last season ended in a first-round playoff loss.

Bergen spent all summer working out as a receiver, but he won the position battle in preseason practice this season, Murdock said. Jacksen Burckley hauled in a 26-yard touchdown pass from Bergen on Senior’s first possession, and Bergen went on to add scoring runs of 15, 2 and 1 yard. Christian Emineth added another Senior score on a 1-yard plunge.

Bergen also had an 87-yard TD run called back because of a penalty. He rushed for 49 yards on nine carries and completed 6 of 11 passes for 48 yards.

“I think we have a really strong (offensive) line for Junior, Junior’s a really fast, really talented kid,” said Payton, who also plays on the offensive line. “He has passing strength and running strength, as he showed tonight. He’s an amazing athlete, honestly.”

Bozeman played the game without Kenneth Eiden IV, a Montana State recruit who had 36.5 sacks and scored 14 touchdowns last season. He suffered an ankle injury this summer while fishing.

Hawks coach Levi Wesche said he wasn’t sure if a healthy Eiden would have changed Friday’s outcome.

“If we turn the ball over like that, I don’t think it matters if we have Kenny or if we don’t have Kenny,” Wesche said, pointing to the two fumbles lost, one interception and three sacks allowed by his team. “Obviously, I think it’s a boost to our kids when you have your big stud, but we’re going to have to get used to not having him because we might not have him until October. We have to find ways to win games now so we can have a chance for the playoffs.”

Bozeman’s Jordan Jones threw touchdown passes to Brady Lang and Tucker MacBeth, the first pulling the Hawks within 13-7 and the second coming after the Broncs had scored 21 unanswered points.

The AA season was delayed for two weeks when athletic directors decided to cancel nonconference games to reduce travel and COVID-19 exposure. At first, no spectators were going to be allowed to games, but Yellowstone County health officials and schools ADs gradually released the restrictions. Bozeman fans found out Thursday morning that they would be able to attend in limited numbers, as well.

Fans, no fans, or limited fans, the players were simply content to be competing again.

“It was just good to get out here,” Bergen said. “You really don't know if you’ll get the chance to do this, and thankfully we were. We just tried to make the best of it and do what we could do.”