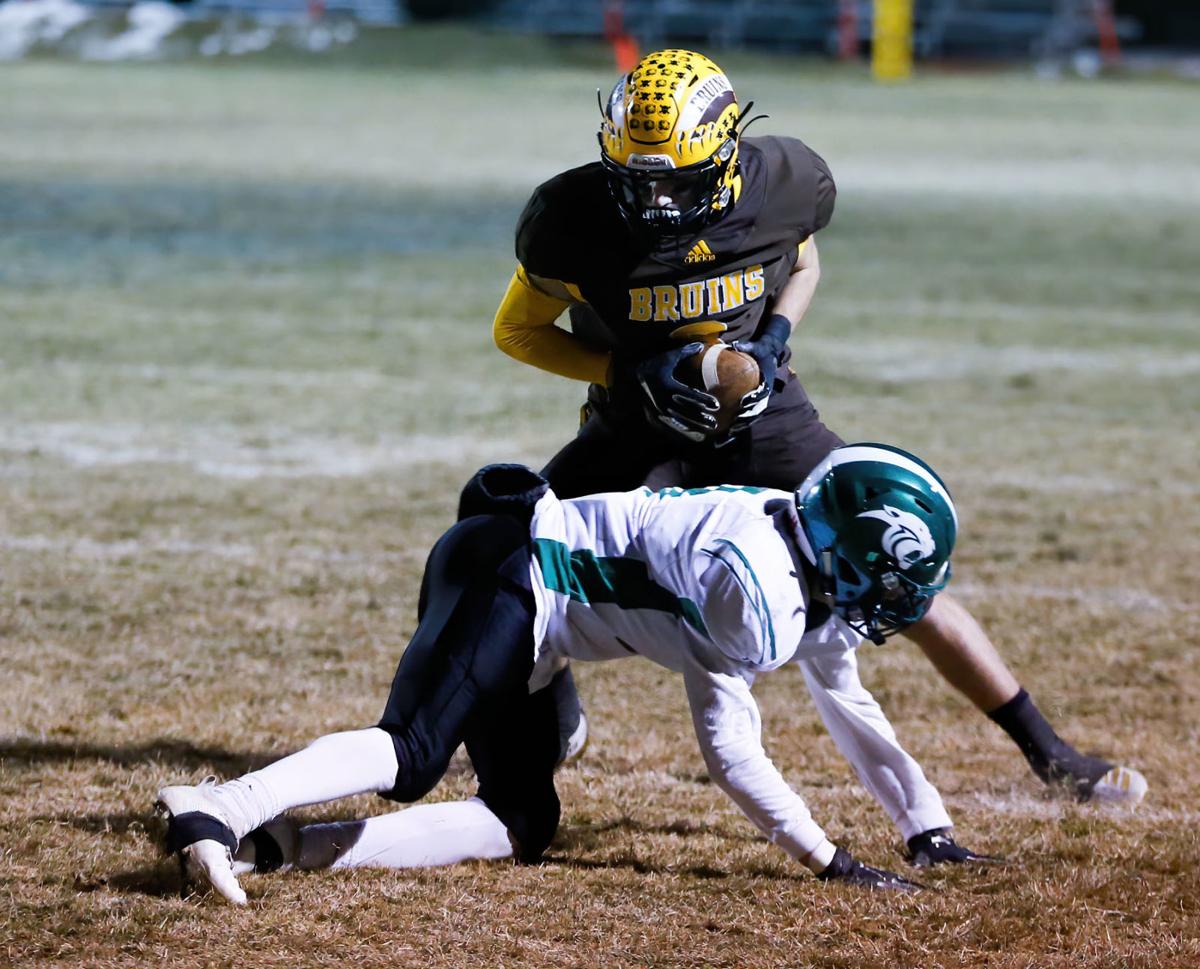 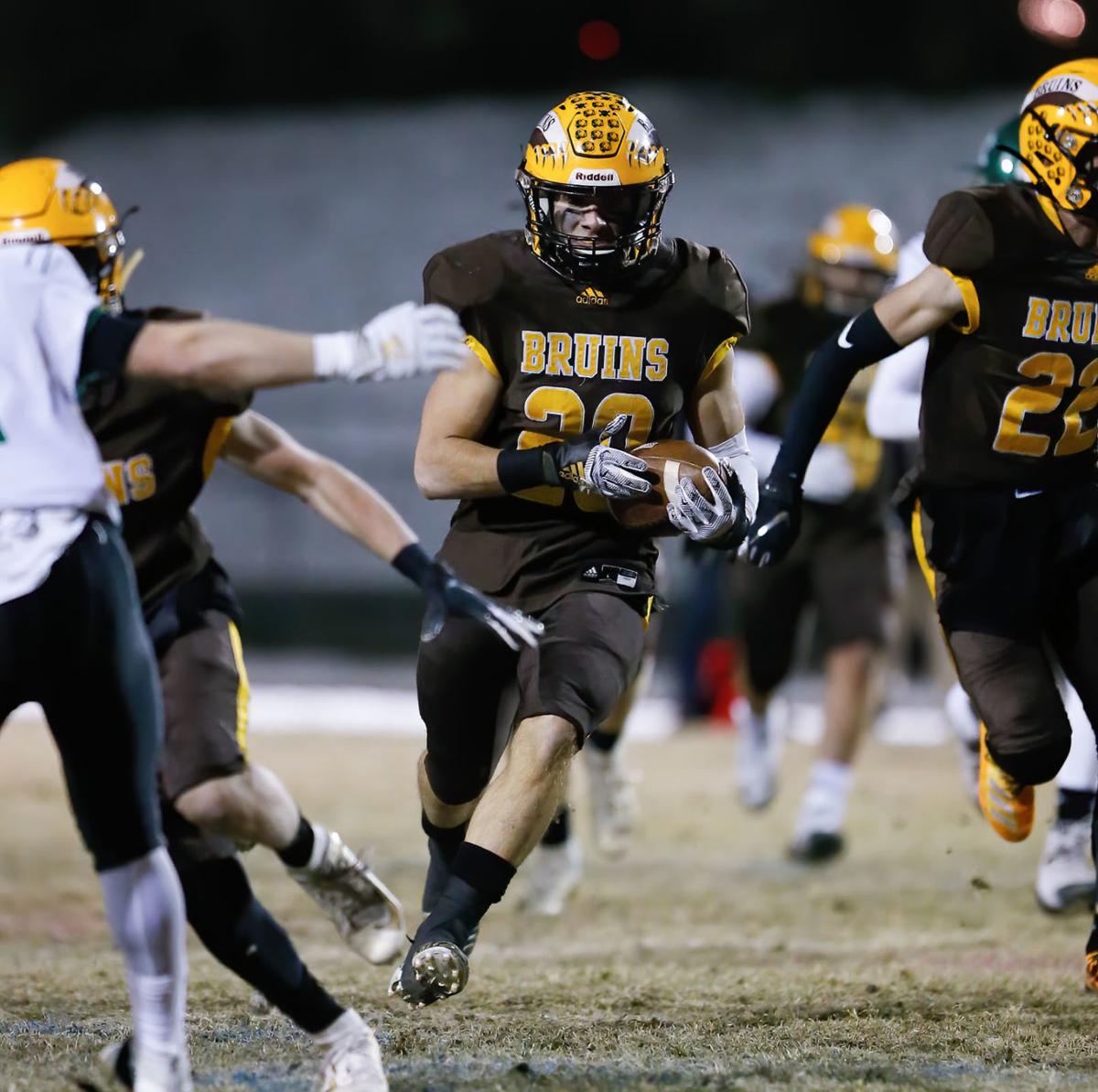 Helena Capital’s Kadyn Craigle rushes for a first down during Friday night's game at Vigilante Stadium in Helena.

Helena Capital’s Kadyn Craigle rushes for a first down during Friday night's game at Vigilante Stadium in Helena.

HELENA — Helena Capital came into Friday night's playoff game against one-win Belgrade as the heavy favorite and 30 seconds into the action, the Bruins showed why.

After taking the opening kickoff, Bridger Grovom completed a 40-yard pass to Parker Johnston and two plays later, Grovom connected with Quinn Belcher for a 27-yard touchdown and the Bruins were off and running.

The three-play, 80-yard touchdown drive was the first of four scoring drives in the first quarter as Capital steamrolled its way to a 49-10 victory.

"It was really fun," Johnston said. "We had a game plan to come out and throw the ball tonight and that's what we did. Everybody came out and played great."

After the quick strike on the first drive for Capital, a 58-yard pass from Grovom to Johnston set up the second score of the game, which came via running back Kadyn Craigle.

Less than two minutes later, after another stop by the Helena Capital defense, which held Belgrade to -20 yards in the first half, Grovom threw his second touchdown of the opening stanza, finding Kaelan Casey for a 27-yard strike.

"(Bridger) played great tonight," Johnston said. "When he gets in a comfort zone, there is no one that is stopping him."

On Capital's fourth possession, Craigle ripped off a 36-yard run and eventually found the end zone from seven yards out, making it 28-0 after one.

In the second quarter, Capital refused to let up and went ahead 35-0 when Noah Braden finished off an eight-play, 71-yard drive with a four-yard touchdown run.

Then, to cap what was a nearly flawless half of football, Grovom connected with Cy Miller on his third touchdown pass of the game, which sent the Bruins into intermission leading 42-0.

"49-10 is a good birthday present," Capital head coach Kyle Mihelish said as his team won by 39 on his birthday. "The kids played well. They really got after it. We scored in the first 30 seconds and kept the pedal down and that was the goal, to get right on the scoreboard."

"As a coach, you always wonder what you will see in a situation like this," He added. "And boy, the kids played hard. It was nice to see."

In fact, Capital played so well in the first half, it didn't even need to play many of its starters in the second.

Grovom didn't even take a snap in the second half and in just two quarters of action, the senior was 11-of-14 for 242 yards and three touchdowns. Johnston also added four receptions for 128 yards.

Craigle also had a stellar first half, carrying the ball eight times for 68 yards and scoring twice. Braden pitched in with four rushes for 53 yards and a score of his own as Helena Capital totaled 368 yards of offense, which was 388 yards more than its opponent during the first 24 minutes.

"I thought our defense played really well," Mihelish said. "It was a good performance for our guys and our special teams also put in a good performance. When you have those things going and your quarterback is playing well in the playoffs, that's huge."

Once the third quarter started, Helena Capital went to its second string, however that didn't stop the scoring.

Following a stop on the opening possession of the third, Helena Capital got a 58-yard run from Tiegan Cozzie. That put the ball at the two and Cozzie, a junior, finished off the drive, pushing the lead to 49-0.

Belgrade finally found the end zone later in the third stanza, as Riley Burman hit paydirt. The Panthers also put together a scoring drive in the fourth quarter and added a field goal to make the final margin 39 points.

From there, Capital salted away the win, thanks in part to the mercy rule, which made for a quick fourth quarter with running clock.

The win improved the Bruins to 8-2 overall on the season and advances them into the quarterfinals of the Class AA playoffs.

Capital will likely be on the road next week versus Billings West but the bracket will be re-seeded once all eight teams are decided.

The first-round of the playoffs got underway. See who advanced.