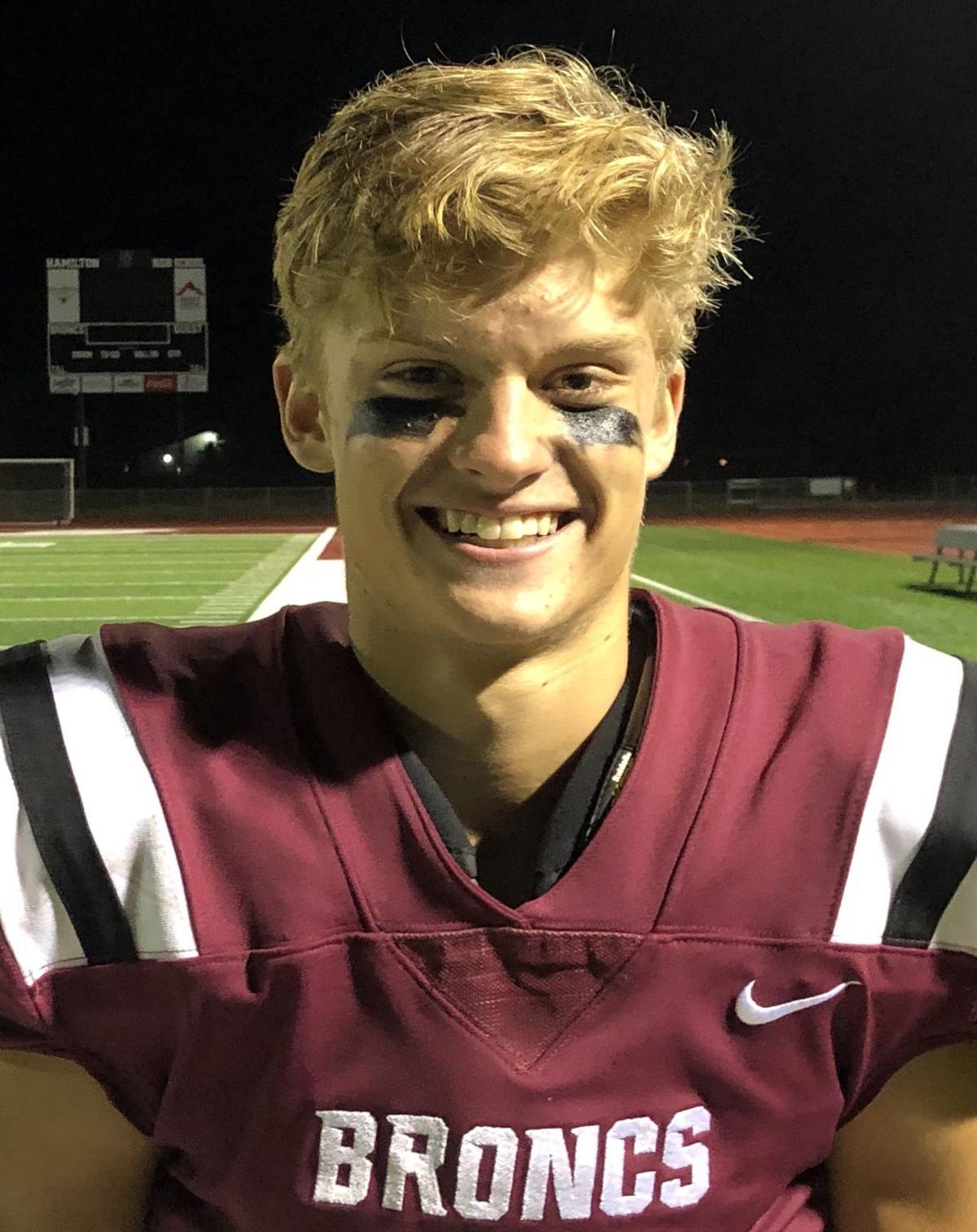 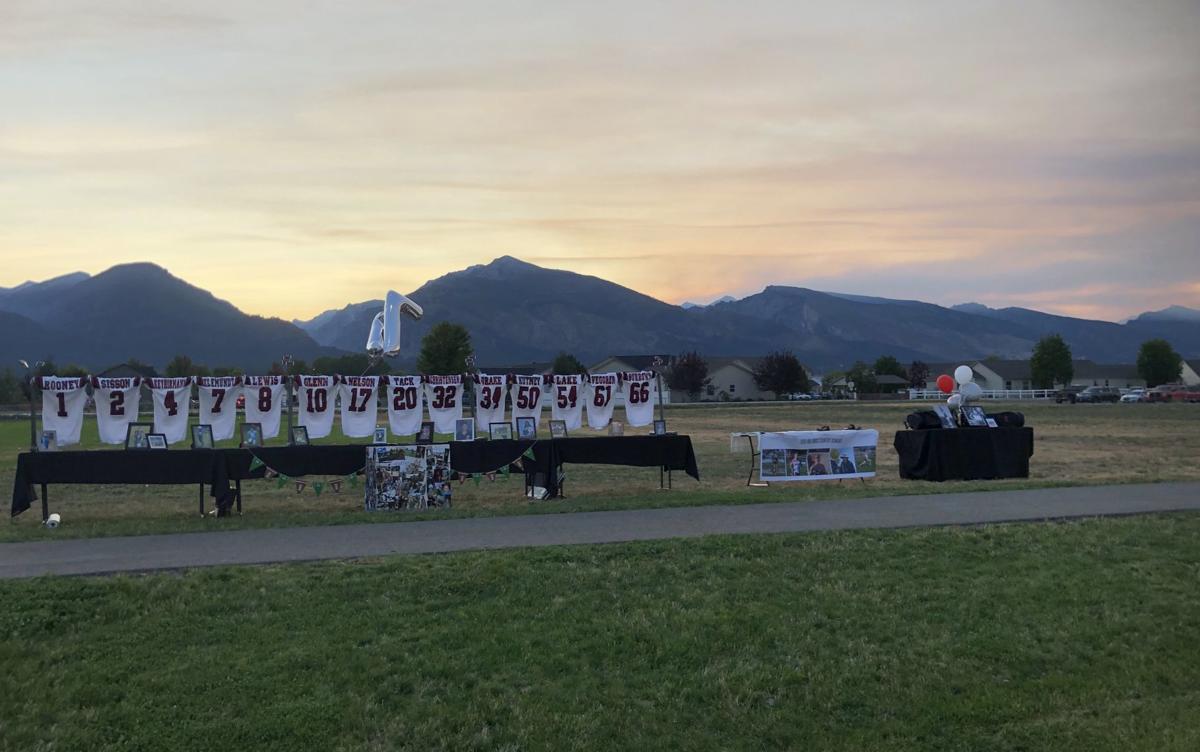 It was senior night for the Hamilton football, cross country and golf teams on Thursday night.

It was senior night for the Hamilton football, cross country and golf teams on Thursday night.

HAMILTON — Few teams have been able to contain the Hamilton football team’s offense the past four seasons.

The Broncs were stellar again Thursday night in a 63-0 win over Stevensville (0-3), piling up 42 points in the first 17 minutes. The steady success goes back to head coach Bryce Carver’s commitment to the spread offense when he moved up from the offensive coordinator position ahead of the 2017 season.

The Broncs already had semblances of it when Travis Blume headed the program prior to Carver, but over the past few years they have taken it to another level.

“You’re only as good as your kids,” Carver said. “We’ve got great kids and they’ve really bought in and really worked at this philosophy. It’s been good to us.”

Carver is being just a tad humble — he is an excellent offensive coach and has a good staff around him — and the numbers over the past three years are eye-popping.

Hamilton (3-0) has piled up 230.9 passing yards and 182.3 rushing yards per game during the 2017-19 seasons. This year’s stats were not immediately available, but the story has been much the same. The Broncs have been remarkably consistent and take care of the ball well.

Hamilton also scores in bunches and including the Broncs first two games this season, they’ve crossed the goal line 216 times on offense since the beginning of the 2017 season.

“Everybody, everybody struggles with their spread, they spread you out and they run the ball very well,” Stevensville coach Trae Williams said. “Their trap scheme is one of the best I've seen. They have athletes all over the field where they're always one of the most athletic teams in the state. And they just fly around. Bryce does a great job with them.”

The Broncs pulled out a little bit of everything on Thursday. There were bubble screens, short slants that found daylight across the middle, zone runs and designed quarterback keepers.

Hamilton takes its long shots, too — on a 2nd-and-1 early in the second quarter, quarterback Tyson Rostad uncorked a beauty of a 41-yard pass to senior Jaiden Klemundt — which adds yet another dimension to the offense.

Carver knows something about big plays. He’s a former Griz and learned much of the spread offense under Robin Pflugrad.

It’s an exciting offense and his team loves playing in it.

“It’s really fun knowing that you can double team any of us and we probably have another option somewhere else,” said Klemundt, who also had the game’s opening score 44 seconds into the game. “It’s super fun.”

Another aspect to this year for the Broncs is its running game as well. They have certainly had a strong rushing attack in the past, but with Ben Tack and Ben Rooney in the backfield, it helps open up even more down the field.

Tack and Rooney each had a pair of short touchdown runs along with a few other carries scattered throughout the game. It’s dynamic and with other weapons such as Eli Taylor, Carver has a lot to work with. Experience along the offensive line has helped as well.

“The two Ben’s are doing a great job, you know, they're both transfer kids and they came in and learned quickly and have done a good job,” Carver said. “Tyson (Rostad) is another guy that we can add in running the ball as a quarterback. And it all goes down to our guys up front, it’s good when you've got four guys that started last year.”

Defensively, the spread offense can sometimes make it hard for a defense to come right back in and make another stop. That has not been an issue Hamilton has had to deal with in its first two games where they have outscored Stevensville and Corvallis a combined 116-6. Hamilton is 3-0 because of a forfeit by Butte Central.

Next week against a tough, physical and athletic Dillon team that is 2-0 will be a massive test.

“That kind of the give and take of the offense. And, you know, if we stall on an offensive on a series, they know they got to go right back out there,” Carver said. “We just got that mindset that they're going to play off of each other. And you know, most of the kids play both ways anyways, so they got to be able to be in shape and do what we do or else we're not going to be successful throughout the year.”

NOTES: Stevensville was without several starters, including quarterback Sahkaia Wehr … The Yellowjackets had three fumbles, all of which became Hamilton scores … Hamilton freshman quarterback Tyson Bauder started the second half and scored a touchdown … It was Senior Night for football, cross country and golf.

MISSOULA — Class AA football is back in Missoula.