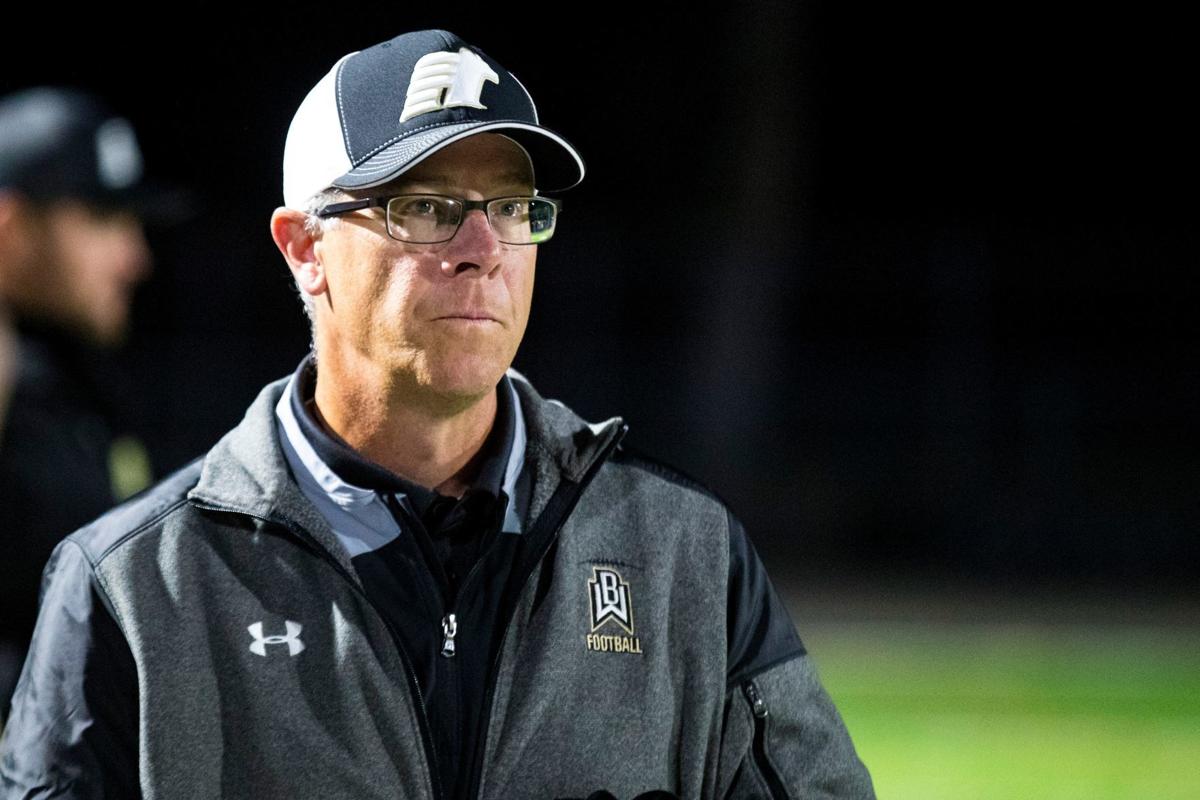 Billings West football coach Rob Stanton is one of nine honorees to be inducted later this summer into the Montana Coaches Association Hall of Fame. His late brother, Dan (below), is also to be inducted. 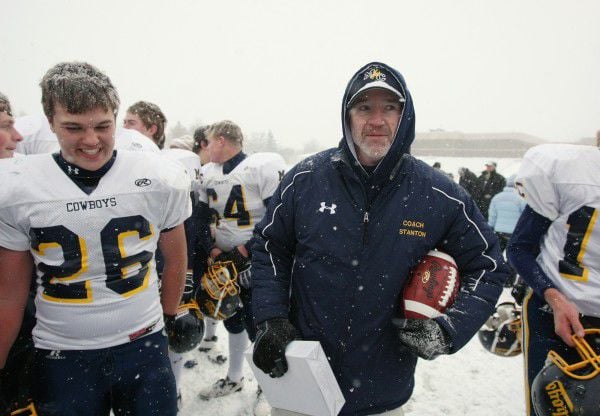 Miles City head coach Dan Stanton and the Miles City football team walk off Wendy's Field at Daylis Stadium in November of 2010 after winning their second Class A state championship in three years.

Billings West football coach Rob Stanton is one of nine honorees to be inducted later this summer into the Montana Coaches Association Hall of Fame. His late brother, Dan (below), is also to be inducted.

Miles City head coach Dan Stanton and the Miles City football team walk off Wendy's Field at Daylis Stadium in November of 2010 after winning their second Class A state championship in three years.

BILLINGS — With already three Stanton siblings following in their father’s footsteps, Rob, the youngest, figured there didn’t need to be a fourth.

Maybe he wasn’t trying to be the black sheep of the family, per se, but there was a tinge of wanting to do his own thing.

Thus, when it came time to enroll in classes in the fall of 1988 at North Dakota’s Dickinson State University, where he’d go on to set career rushing records for the Blue Hawks, Rob tried another path.

All it took was one accounting class to realize his mistake.

“I was going to maybe pursue business. I don’t know if I could even spell business,” Rob jokes now.

Fight as he might — and, maybe he didn’t fight it hard enough — Rob eventually ended up on the same coaching path as father Jim, brother Jim, brother Pete and brother Dan. It’s a path that led the younger Jim to the Montana Coaches Association Hall of Fame (Class of 2013), where he’ll soon be joined by Dan, who passed away more than four years ago, and Rob.

The MCA announced its nine new honorees last week, and the induction ceremony is scheduled for July 30 in Great Falls. The fact that he gets to go into the hall with his late brother is pretty special to Rob.

Dan was a linebacker at DSU when Rob got there. He died of brain cancer on Sept. 13, 2015, already in possession of two Class A state football titles, and five days later Rob, a longtime successful track and field coach at Billings West, picked up his first career win as the Golden Bears’ head football coach.

Dan and Rob spent nine years together as assistant track and football coaches at Miles City before Rob moved on to Billings. So their careers have always had a special relationship beyond being brothers.

“It’s pretty cool that we’re able to go in together,” Rob said. “Even though he’s not here, I’m sure he’ll be there.”

Dan spent 25 seasons at Miles City, where he eventually became head coach for basketball (three years), track and field (two years) and football (12 years). It was in football where Dan made his mark, compiling an 84-30 record and winning state championships in 2008 and 2010 by beating, of all people, brother Jim at Billings Central for both titles.

After his nine years at Miles City, Rob has spent the past 18 at West. He completed his fifth year as head football coach with a 41-16 career record, winning a Class AA state title in 2018. But it’s in coaching track where Rob has made his bones: in his 18 seasons, his teams have won 23 state trophies, including two girls state championships and seven boys state titles.

Jim, the father, started what has become the family business, coaching in Richey and Circle. He eventually became an administrator, and when the family wound up in Baker, the Stanton kids were not only influenced by their father and mother, Pat, but by the myriad successful coaches in Spartans land.

As the first Stanton sibling to get into Montana’s coaching hall, Jim claims to have not lorded that fact over his brothers. Much, anyway. But Jim, like Rob, is especially happy to see Dan getting his due.

Jim, who has been at Billings Central since 2002 after stops in Baker, Forsyth and Huntley Project, said those championship losses to Dan take on more meaning as the years go by.

“As you start to move on the back end of doing this, those things really stand out,” he said. “Just puts it into perspective that it’s really a pretty simple game, but to have the opportunity to play in those types of games is definitely a memory you’ll take forever.”

Rob mentioned, and Jim reiterated, all the help that gets a coach to the hall of fame point. The family members who support them, the assistant coaches through the years, the athletes who train and work so hard.

No one, Rob said, makes it alone.

“Not even close to it,” he said. “When you’re around good people who are also dedicated to the kids, special things can happen.”

So, with three Stantons in the hall of fame, that leaves Pete. He had a successful Montana coaching career, but he’s built his own legacy at Dickinson State. He’s just the third Blue Hawks football coach to reach the 50-win mark (he’s 50-18) since 1925, and before taking the head football job, he guided the DSU men’s outdoor track team to NAIA national championships in 2004, 2005 and 2006, with runner-up finishes five other times.

It's no wonder Jim called Pete the best coach in the family.

Jim thinks Pete’s stint at Terry, where he guided the Terriers to a 70-20 record and nine playoff appearances, including three title-game shots, and a two-year run at Belgrade, are worthy of hall consideration.

But if that doesn’t happen, three out of four ain’t bad. And who knows what sort of coaching tree these four will spur.

“Me, personally, growing up in Baker, you had a lot of coaches you looked up to that I can still say are pretty dang good friends of mine from so many years ago,” Rob said. “Those were all role models that we had, and maybe we didn’t necessarily want to follow them, but they showed us what a good life could be like, and coaching was a part of it.”

The nine coaches have been in charge of football, basketball and track, just to name a few sports.