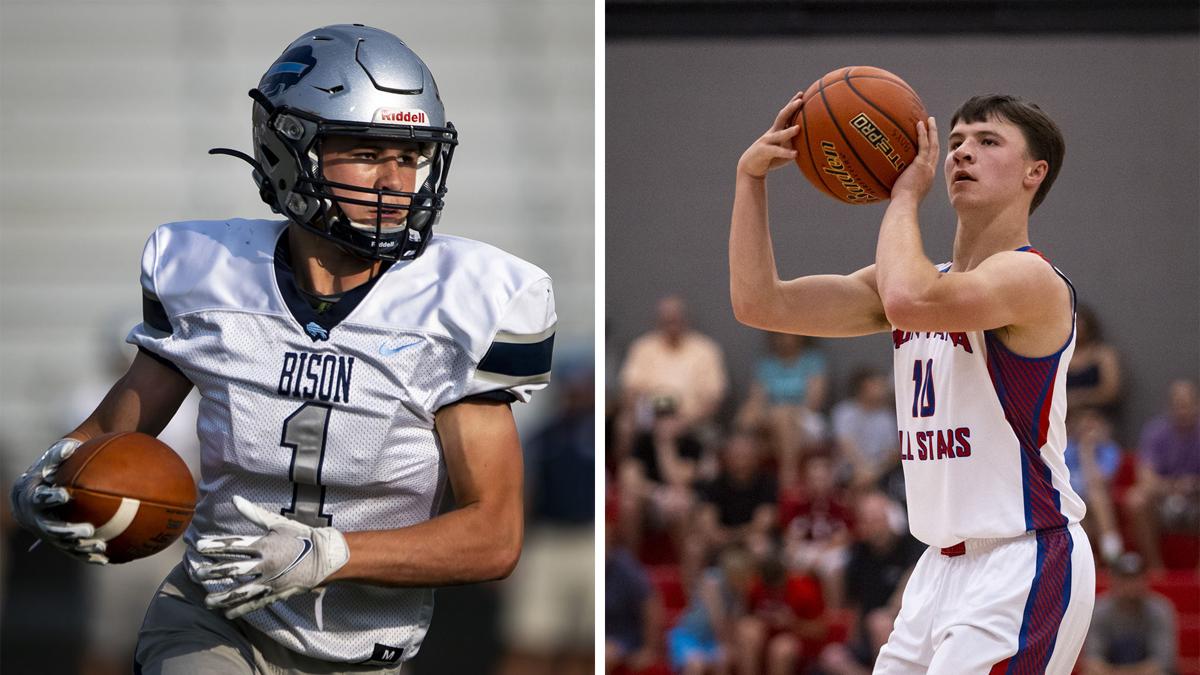 Levi Torgerson of Great Falls High was all-state in football and basketball this season. After playing in the Midland Roundtable Montana-Wyoming Basketball Series last weekend, Torgerson will suit up for the East in Saturday's East-West Shrine football game. 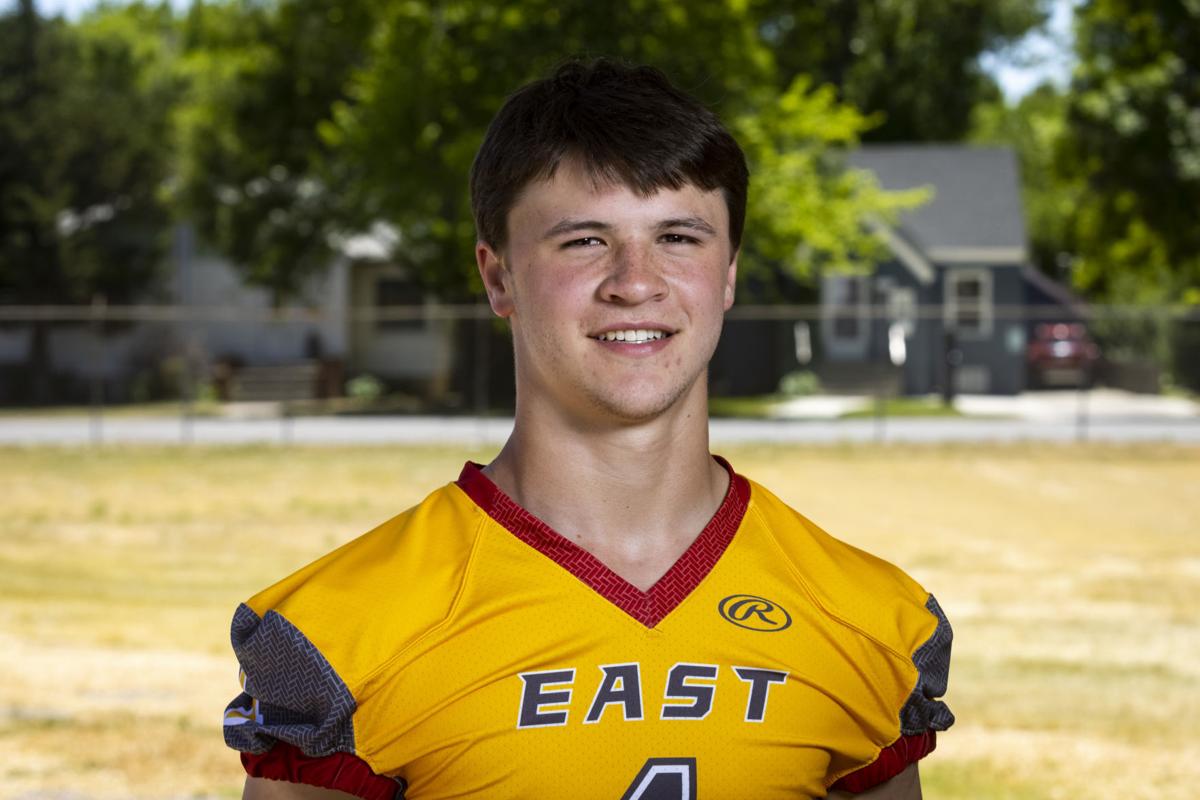 Great Falls’ Levi Torgerson will play in his third all-star contest in a week Saturday when the East-West Shrine Game kicks off at Wendy's Field at Daylis Stadium. Togerson also played for Montana during the Midland Roundtable Montana-Wyoming Basketball Series last weekend. 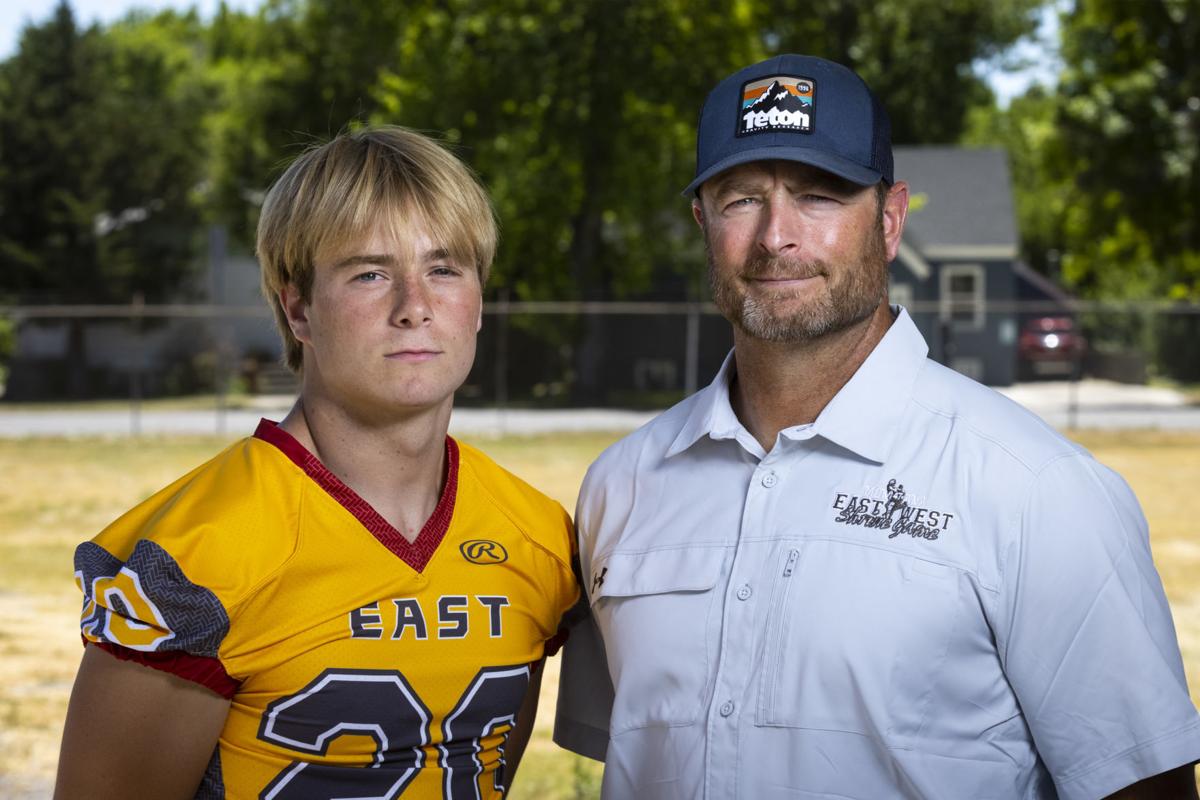 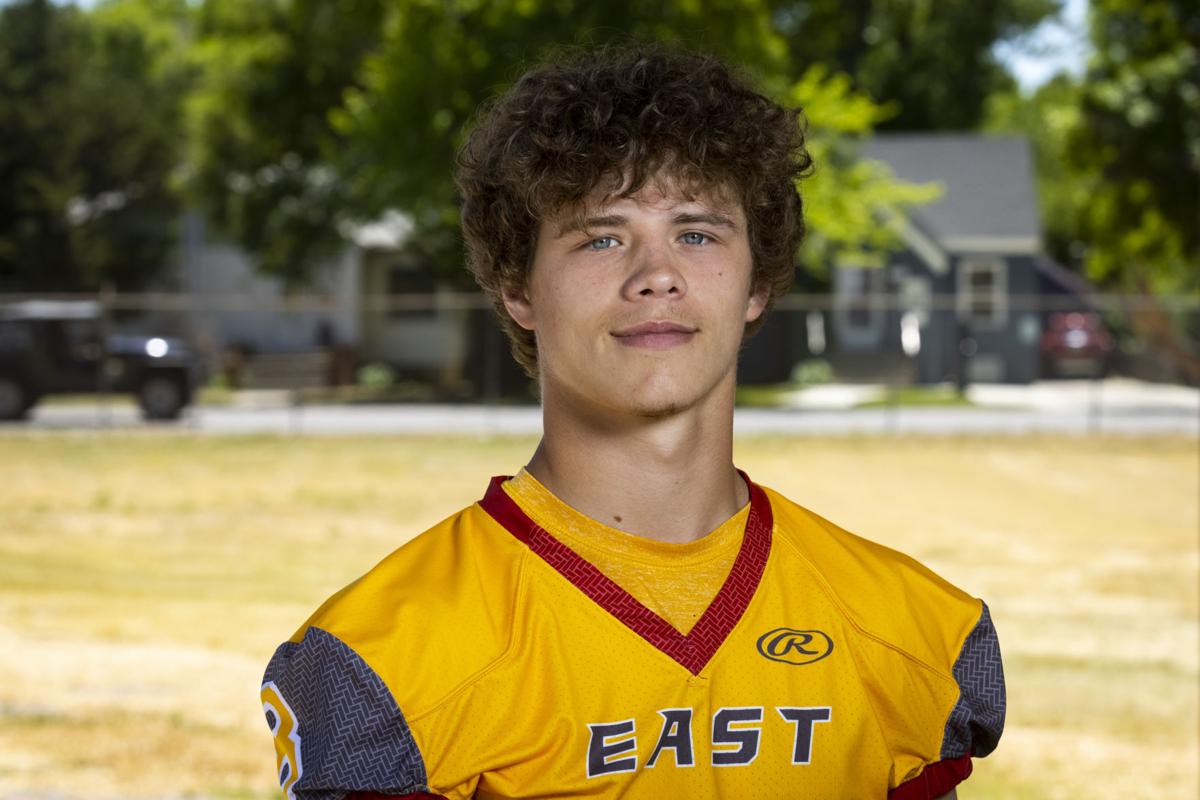 Miles City’s Jayden Venable is a receiver on the East team. 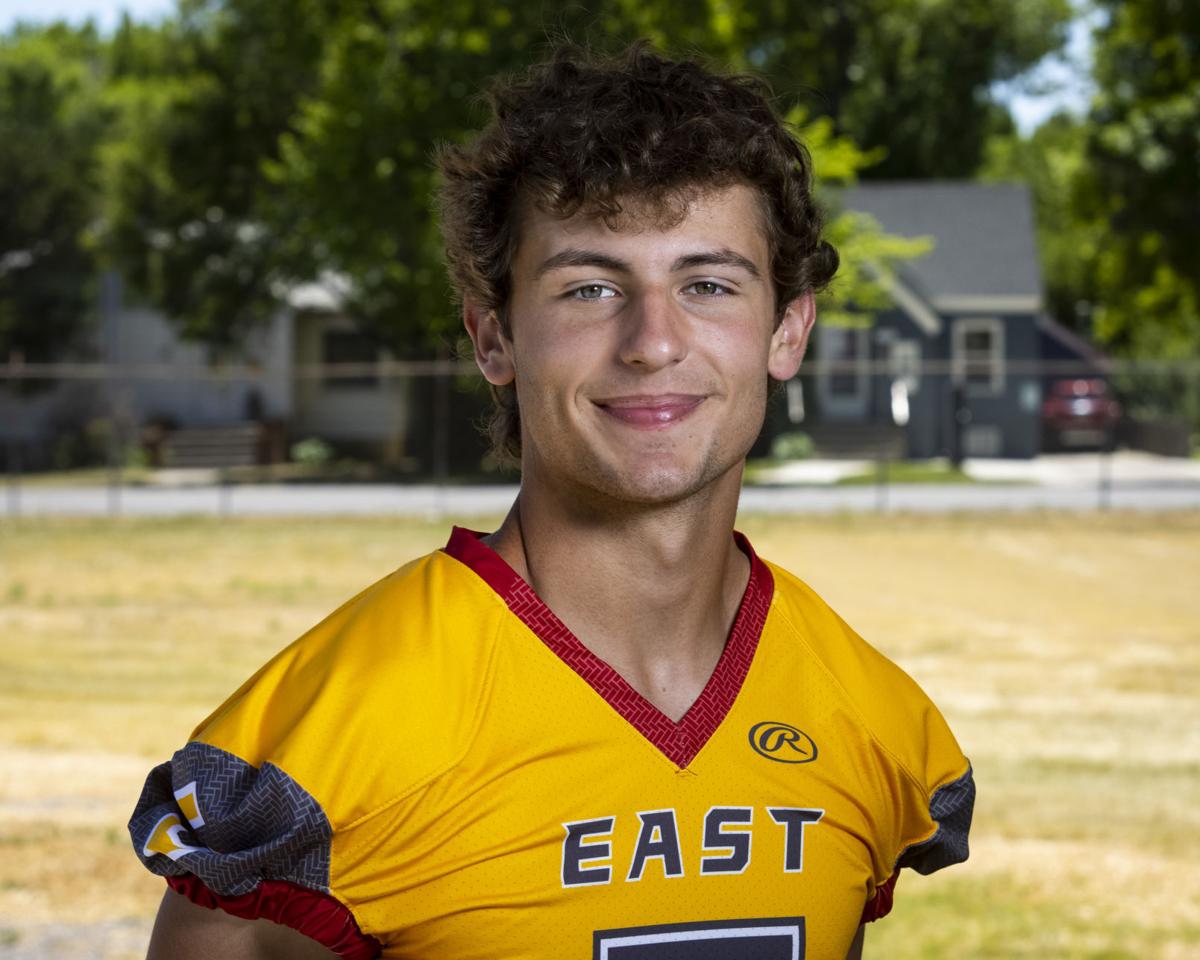 Miles City’s Carson Hunter is a quarterback on the East team. 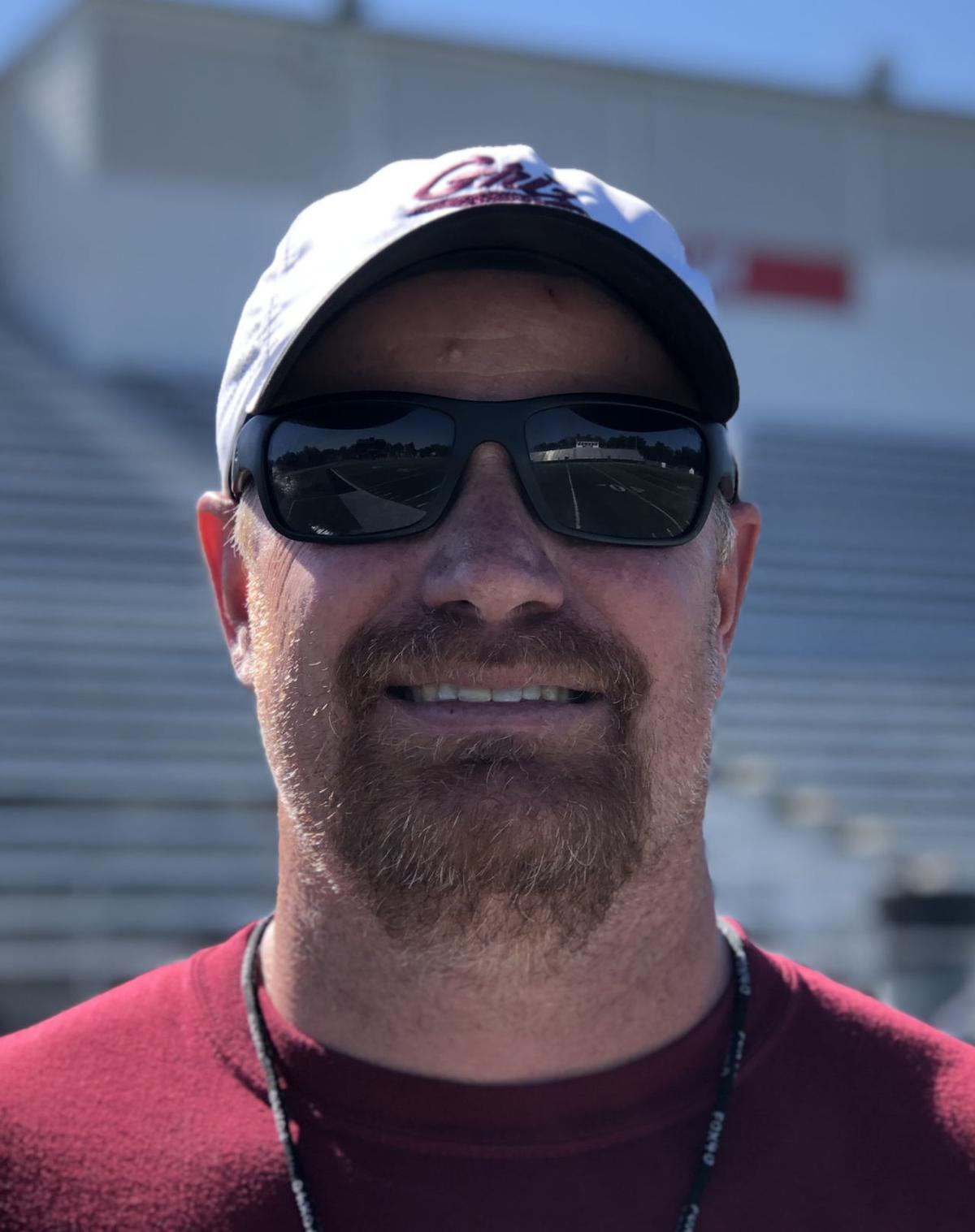 Red Lodge's John Fitzgerald is the head coach for the East team for the Shrine Game on Saturday.

BILLINGS — Levi Torgerson packed nearly all his clothes and left town for Billings. It was going to be a busy week and a half for the Great Falls High graduate.

And it still is.

Saturday, when Torgerson puts on football pads and a helmet for the 74th East-West Shrine Game at Wendy’s Field at Daylis Stadium, he’ll be playing in his third all-star game in a week.

Torgerson played last weekend in the Midland Roundtable Montana-Wyoming All-Star basketball series, helping the Big Sky State to a two-game sweep. He arrived in Billings June 9 to begin basketball practice and since then has transitioned to practicing with the East football team for this weekend’s upcoming game.

By this Wednesday, things were getting a little ripe.

“I don’t have any clothes left at home,” Torgerson said after practice, laughing. “I need to wash some clothes.”

Torgerson made 52 3-pointers last basketball season to lead Class AA, hitting 35%. He led the state in steals (2.9 per game) and was second in assists (5.1), and he will play next season at Montana Tech. Last Friday he scored 10 points in Montana’s 109-104 win over Wyoming and followed that up with another 10 points the next night in a 110-71 victory.

After the series was over, he packed his clothes — both clean and dirty — again and moved from the Billings Hotel to the MSU Billings dorms on Sunday.

Switching gears from basketball to football in a day’s time wasn’t too bad, he said.

“You know, I just got pretty sore and tired after the first week of basketball, but football is a different type of grind,” he said. “It’s been fun to put the pads on one last time and just go all out with a bunch of guys.”

Torgerson was a deep-ball and return threat for the Bison last fall. He was named first-team all-state at receiver, kick returner and cornerback, which is the position he’ll play Saturday.

He said the East football all-stars have taken a little longer to mesh than the basketball all-stars — there are more players, after all — but in the end, both squads bonded rather quickly. When all is said and done and he returns home (finally) on Sunday, it’ll be a week and half he’ll never forget.

“It’s kind of fun to meet new kids and play with new kids, you get to see what their talents are and what your talents are,” he said. “And then to get to play with everybody you know.

“It’s just been a fun experience and I’m going to be sad when it’s over.”

But probably glad to have regularly cleaned clothes again.

The Shrine Game traditionally is played in July, but after last season’s game was canceled due to COVID-19, this year’s game was moved up to June.

This week sure seemed like July weather, especially on Monday and Tuesday when temperatures reached triple digits.

Rather than fight the heat on Tuesday — which reached as high as 105 — the East team hit the swimming pool at Rose Park. And after some encouragement from players, who took turns taking belly flops, assistant coach Jory Thompson of Fort Benton did his own flop into the pool after other coaches resisted the egging on of players.

“Peer pressure, you know,” Thompson said with a big smile when asked about the incident. “It’s always a struggle to resist peer pressure. Ah, heck, who’s that going to hurt, right? A little belly slap isn’t going to kill me.”

Thompson is one of the lucky ones. He gets to coach his son Jace in Saturday’s contest.

“It’s a great way to end my high school career, getting coached by my dad for one last game,” Jace said. “It’s a good way to end it.”

Said the elder Thompson: “Obviously, it’s an opportunity to coach football with some great athletes, some great football players, the best in Montana. That’s pretty amazing. But it’s also wonderful to have the experience with my son, of course. I’ve loved coaching him for a long time and to have one more shot, that’s pretty cool.”

While Torgerson spread his dual-sport talents over the course of many days, Miles City’s Carson Hunter and Jayden Venable showed their double-duty abilities in a single day.

Following Tuesday’s morning football practice, Hunter and Venable suited up for the Miles City Mavericks in their Class A American Legion doubleheader against the Billings Blue Jays at Pirtz Field in the evening.

The Mavericks lost both games, but Hunter went 3 for 6 with two runs scored and a double in the two games, while Venable was 3 for 7 with a double and a run scored.

Hunter said he and Venable were fortunate the schedules worked out that they could be in both places on Tuesday. After the first football practice of the day the two players headed over to the baseball field, though they missed out on the swimming excursion and the evening football session.

Venable said they started their day about 9 in the morning and got back to their dorm around 11 p.m.

“All the guys here, we get along really well,” said Venable, who will be a receiver for the East Shrine team. “And then to go and see my other buddies playing baseball the same day, it was a good day. We slept well, that’s for sure.”

Hunter, who will play quarterback on Saturday, said the two Mavericks hadn’t performed any baseball activities for nearly a week before Tuesday’s game.

“It’s an honor just making the Mavericks team, where there’s a lot of tradition,” he said. “Just being a starter in general and then having this opportunity to come and be playing at the Shrine game. For both of those to line up, it’s a pretty big blessing and we were thankful for it.”

The game stays the same

Saturday’s game will be the third go-round for East head coach John Fitzgerald of Red Lodge.

He played in 1997’s game before he went on to the University of Montana, where he was a linebacker and fullback, and was an assistant coach in 2012.

Red Lodge's John Fitzgerald is the head coach for the East team for the Shrine Game on Saturday.

So Fitzgerald has come full circle, so to speak. What’s remained the same though the years, Fitzgerald said, is the cause of the game.

According to the website montanaeastwestshrinegame.org, the game has raised nearly $1 million in the past 10 years.

“The biggest thing is that these kids understand what we’re playing for, and that’s to raise money for the (Shriner’s Hospital for Children in Spokane),” he said. “They’re excited to play this game. They understand the impact it has and we’re just humbled to be a part of it.”

“You’re asking me for a prediction,” he said with a smile. “That’ll be off the record.”

Check out who will be playing and coaching in the contest.