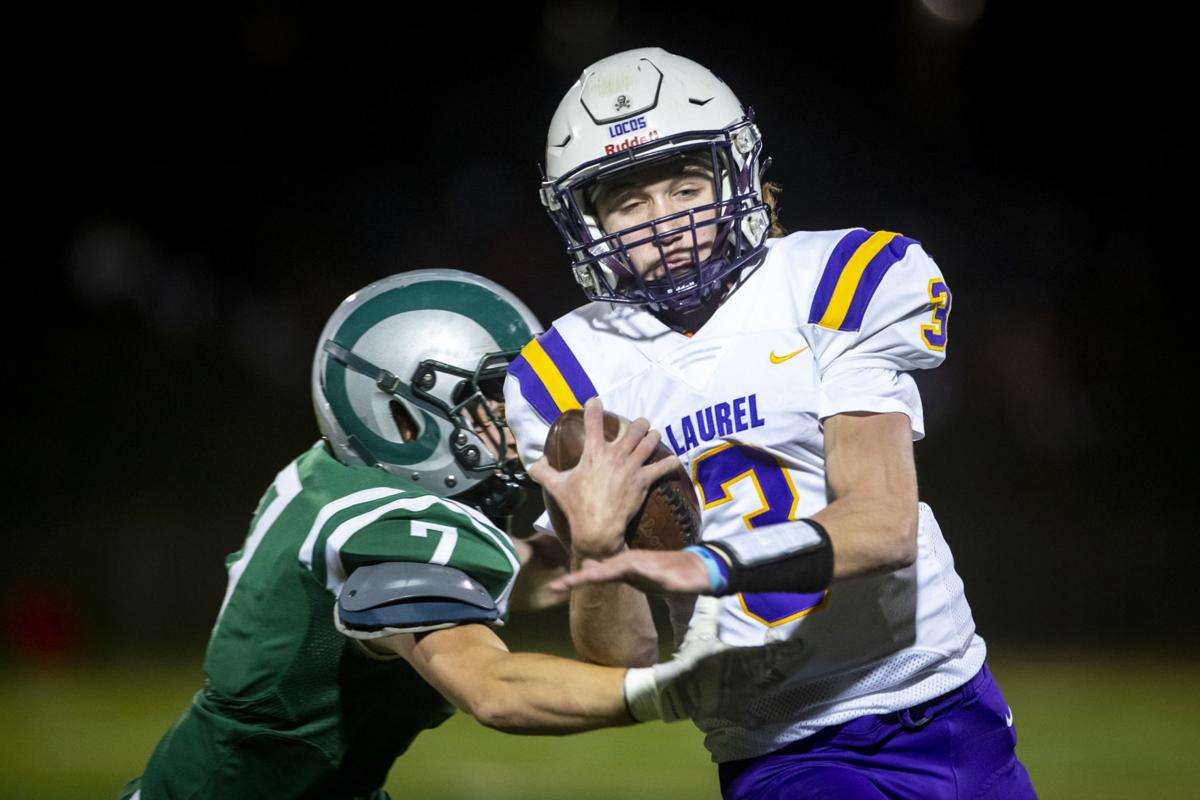 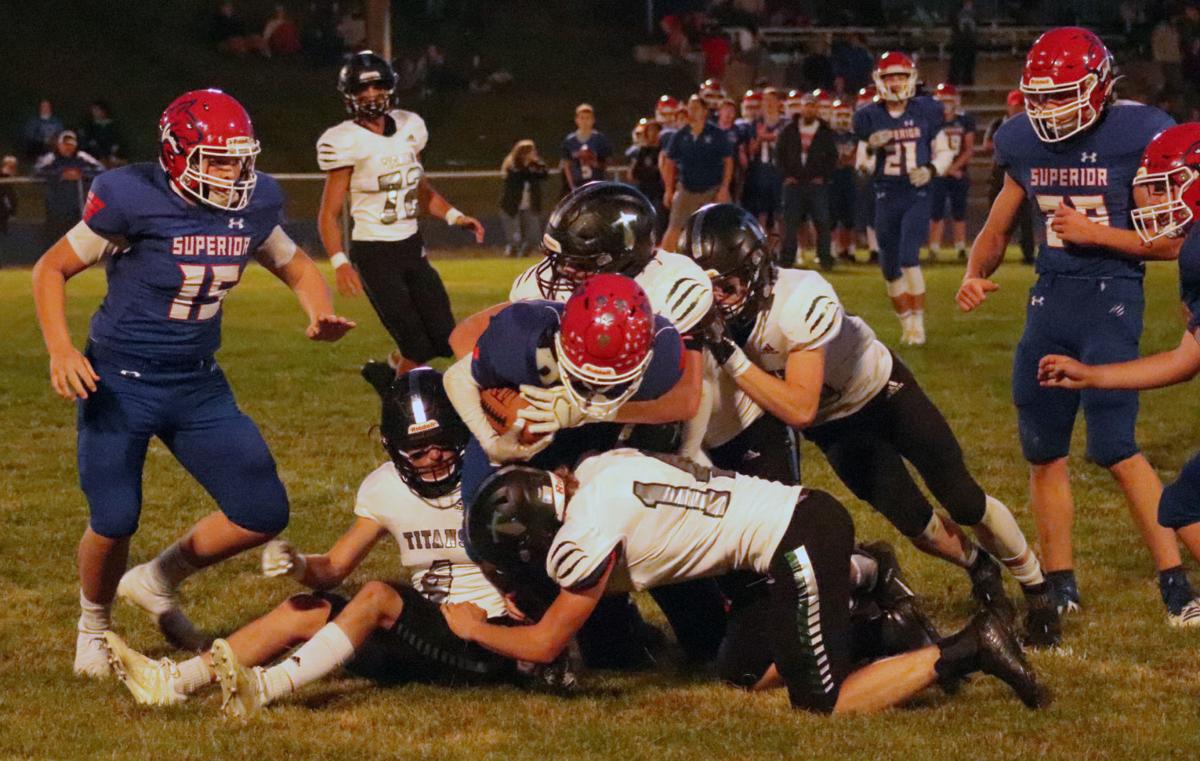 The top-ranked Drummond-Philipsburg defense stifles Alberton-Superior on Friday night in an 8-Man game. The Titans led 40-0 at halftime.

The top-ranked Drummond-Philipsburg defense stifles Alberton-Superior on Friday night in an 8-Man game. The Titans led 40-0 at halftime.

Will be updated as we receive results.

• No. 2 Billings West 63, Billings Skyview 0: Isaiah Claunch threw four touchdown passes — two to Caden Dowler — and Dowler added a running TD of his own as the Golden Bears (5-1, 4-0) coasted past the Falcons (1-5, 0-4) in a crosstown matchup. Michael DeLeon rushed for two TDs for West, which led 42-0 at halftime. Riley Bergeson and Max Murphy caught Claunch's other two scoring passes.

• No. 5 Great Falls CMR 36, Bozeman Gallatin 14: Raef Newbrough ran for a score, caught another and threw for a third as the surprising Rustlers (5-1) kept rolling by pulling away in the second half to hand the Raptors their fourth straight loss after a 2-0 start. Cole Taylor threw two TD passes and Trey Mans booted two field goals for CMR. Newbrough had a 1-yard run, tossed a 2-yard pass to Ashton Permann and caught a 19-yarder from Taylor. Rylan Schlepp caught two TD passes for Gallatin, including one from Braedon Mikkelson, who threw for two.

• Helena Capital 43, No. 3 Butte 3: Joey Michelotti hit Eric Cockhill for a 17-yard touchdown in the first quarter and the floodgates opened from there as the Bruins (4-2) halted the Bulldogs' (4-2) four-game winning streak. Dylan Graham rushed for more than 120 yards and a score for Capital. Leading 21-3 at the half, the Bruins opened the second half with an 80-yard end-around for a TD by Tom Carter. Casey Kautzman's second-quarter field goal provided Butte with its only points.

• Helena 48, No. 4 Kalispell Glacier 24: Kaden Huot threw three touchdown passes and ran for three more as the Bengals (4-2, 2-2) scored seven TDs and stunned the Wolfpack (4-2, 2-2). Huot rushed for 149 yards and passed for 170 for  Helena, which held leading Class AA rusher Jake Rendina to 39 yards. Jake Turner scored three TDs for the Wolfpack, two through the air and one on an end-around. QB Gage Sliter threw for 255 yards.

• Billings Senior 31, Bozeman 28: Jacob Miller ran for four touchdowns, including the game-winner from 1 yard out on fourth down with 13 seconds to play, as the Broncs (4-2, 3-1) rallied from a two-touchdown halftime deficit to down the Hawks (3-3, 3-1). Jake Casagranda threw for all four of Bozeman's touchdowns to four different players, including a 13-yarder to Avery Allen with 4:23 to play for a four-point lead. Miller rushed for 138 yards on 30 carries.

• Miles City 64, Livingston 0: Dalton Tvedt scored three first-quarter touchdowns and Dalton Polesky tossed two more in the first half as the Cowboys (4-1) overwhelmed the overmatched Rangers (0-6). Jay Pluhar had an interception return for a score for Miles City.

• Dillon 38, Butte Central 20: Kee Christiansen threw three touchdown passes and ran for another, and Treyton Anderson caught two scoring strikes and returned an interception for a score as the Beavers (4-2) throttled the Maroons (2-4). Christiansen also found Jon Kirkley from 25 years out. Konnor Pochervina had two rushing TDs for Butte Central.

• No. 2 Laurel 28, No. 3 Billings Central 14: Kyson Moran rushed for the game's first two touchdowns from 5 and 1 yards out and the Locomotives (5-0, 2-0) held off the arch-rival Rams (4-1, 1-1) in a rematch of last year's state championship game. Beau Dantic scored from 53 yards out in the third quarter to give the Locos a three-TD lead. Clay Oven and Kade Boyd scored Central's touchdowns.

• Glendive 49, Havre 37: Espyn Hostetler scored his team's final three touchdowns and the Red Devils (2-3, 1-2) downed the Blue Ponies (2-4, 1-3) in a shootout. Hostetler's runs were from 5, 2 and 8 yards. Parker Buckley tossed three TD passes for Glendive, two to Chase Crockett. Ryan Thivierge had a big day for Havre, scoring on an 85-yard kick return and following up with TD runs of 1, 9 and 4 yards.

• No. 4 Whitefish 48, Ronan 12: Fynn Ridgeway rushed for a 1-yard touchdown, tossed a 60-yarder to Bodie Smith and returned an interception 33 yards for a score as the Bulldogs (6-0, 1-0) coasted past the Chiefe (0-5, 0-4). Ty Schwaiger added 8- and 7-yard scores on the ground for Whitefish. Tristan Fisher caught a 2-yard TD pass and ran for a 4-yard score to account for Ronan's points.

• Frenchtown 38, Kellogg (Idaho) 23: Eli Quinn threw for a touchdown and ran for another, and Carter White returned a kickoff 90 yards for a score to lead the Broncs (3-3) to the nonconference win. Gabe Plaen kicked all five extra points and a 22-yard field goal for Frenchtown. Noah Rausch opened the scoring with a 28-yard run for the Broncs.

• No. 5 Bigfork 42, Missoula Loyola 0: Levi Taylor ran for two long touchdowns, and Patrick Wallen ran for one and threw for another as the Vikings (5-0, 1-0) demolished the Rams (3-3, 0-2) on the road. Taylor, who carried seven times for 161 yards, had scoring runs covered 55 and 40 yards. Wallen ran from 16 and found Nick Walker for a 20-yard score. Jackson Abney added an exclamation mark with an 86-yard interception return for a score.

• No. 10 Jefferson 37, Three Forks 0: Braden Morris tossed four touchdowns and Luke Oxarart scored three times for the Panthers (3-2, 1-1) against the Wolves (3-3, 0-2). Jake Genger got in on the act with a touchdown reception and a fumble recovery for a touchdown on a blocked punt in the second quarter. Morris completed 15-of-18 passes for 185 yards. Luke Oxarart caught three passes for 58 yards and Jake Oxarart led Jefferson in rushing with 90 yards on five carries.

• No. 8 Glasgow 32, No. 4 Fairfield 22: In the game of the night, KJ Ingram took the opening kickoff back 75 yards and the Scotties (5-1, 2-0) snapped the Eagles' (5-1, 1-1) conference streak at 48 straight. Mason Donaldson ran for a score and threw for another as Glasgow handed Fairfield its first Northern B defeat since 2010, Donaldson's 7-yard run with 7:35 to go in the third quarter gave Glasgow the lead and his 5-yard pass to Trey Johnson with 43 seconds to play in the same stanza provided the final points. Miguel Perez's 7-yard run in the third quarter had given Fairfield its last week. Donaldson's run tied it and Tatum Hansen's 2-point conversion put the Scotties ahead.

• No. 2 Columbus 50, No. 9 Big Timber 19: Cooper Cook rushed for 140 yards and three touchdowns as the Cougars improved to 5-0, 2-0 with a win over the Herders (3-3, 1-1). Quarterback Caden Meier added to the highlights with touchdown passes to Colby Martinez and Kaeden Daniels. Columbus' Trey Johannes rushed for 92 yards. The Cougars led 20-13 at halftime, but outscored the visiting Sheepherders 30-6 after intermission. The Cougars finished with 451 yards on offense. Big Timber received 186 passing yards and one TD from Connor Giesecke. He also ran for 62 yards and scored twice on the ground.

• No. 1 Drummond-Philipsburg 54, Alberton-Superior 22: Avery Metesh took the opening kickoff 68 yards for a touchdown and added rushing and receiving touchdowns, and Tyler Burden scored three first-quarter TDs as the Titans (5-0, 5-0) burst to a 40-0 halftime lead against the Bobcats (3-2, 2-2). Burden had 44- and 74-yard TD runs and caught a 24-yard scoring pass from Metesh. Orion Plakke tossed touchdown passes covering 8 and 24 yards to Decker Milender in the second half for Albertson-Superior.

• Shelby 72, Chester-Joplin-Inverness 46: Senior quarterback Taylor Parsons amassed 521 yards on offense and figured in seven touchdowns in the visiting Coyotes' )3-3, 3-2) victory over the Hawks (2-4, 1-3). Parsons completed 23 of 41 passes for 375 yards and five touchdowns. He also rushed 21 times for 146 yards and two more scores. Receiver Rhett Reynolds caught 13 passes for 283 yards and five scores. CJI's Kyle Harmon rushed for three TDs. Adam Grammer (136) and Nate Nelson (115) both rushed for over 100 yards for the Hawks.

• Harlowton-Ryegate 34, No. 10 Geraldine-Highwood 29: Sivad Davis scored three touchdowns and Colter Woldstad threw for two TDs and ran for the clincher as the Engineers (1-4, 1-1) surprised the previously unbeaten Rivals (4-1, 2-1). Davis had scoring runs of 16 and 66 yards and also caught a 20-yarder from Woldstad. Bryson Bahnmiller caught a 32-yard TD pass and also ran for a 38-yard score to bring Geraldine-Highwood within reach in the fourth quarter.

• Noxon 2, West Yellowstone 0 (forfeit): The Red Devils got the win with 3:17 remaining in the first quarter when the Wolverines forfeited. Noxon was leading 8-0 at the time on a run by Cade VanVleet.