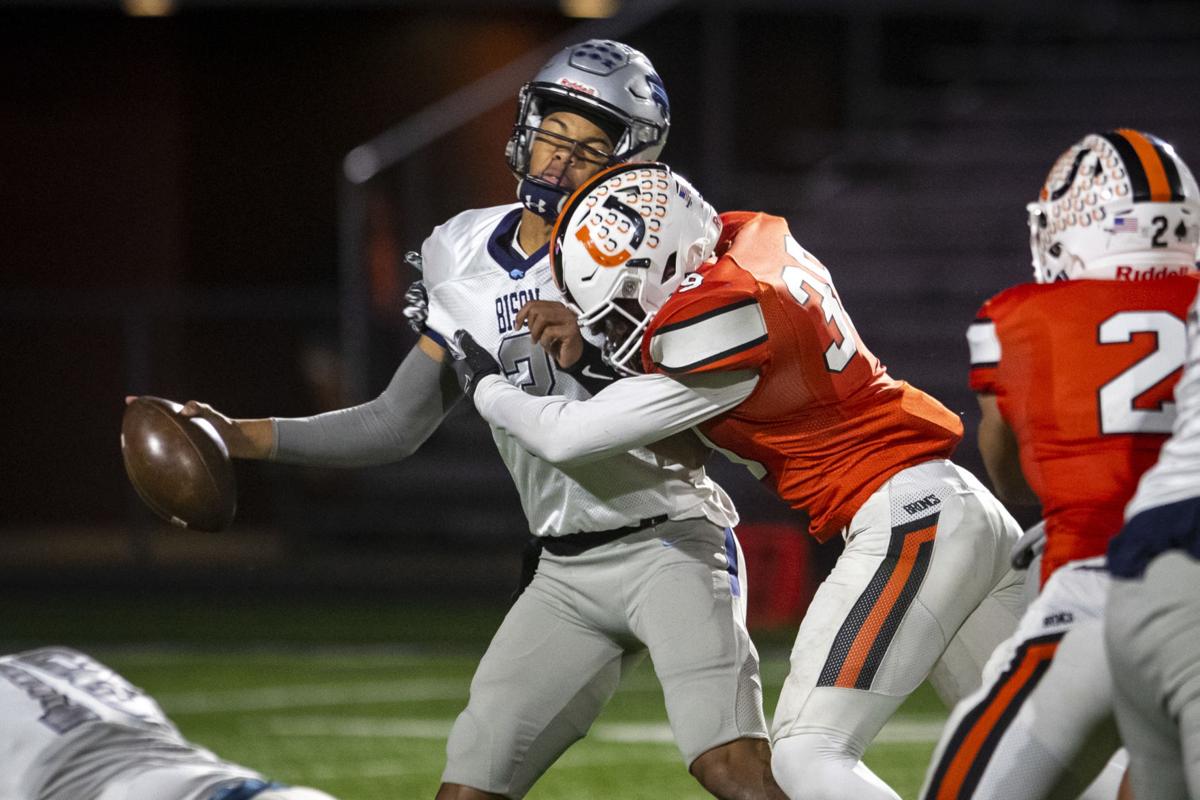 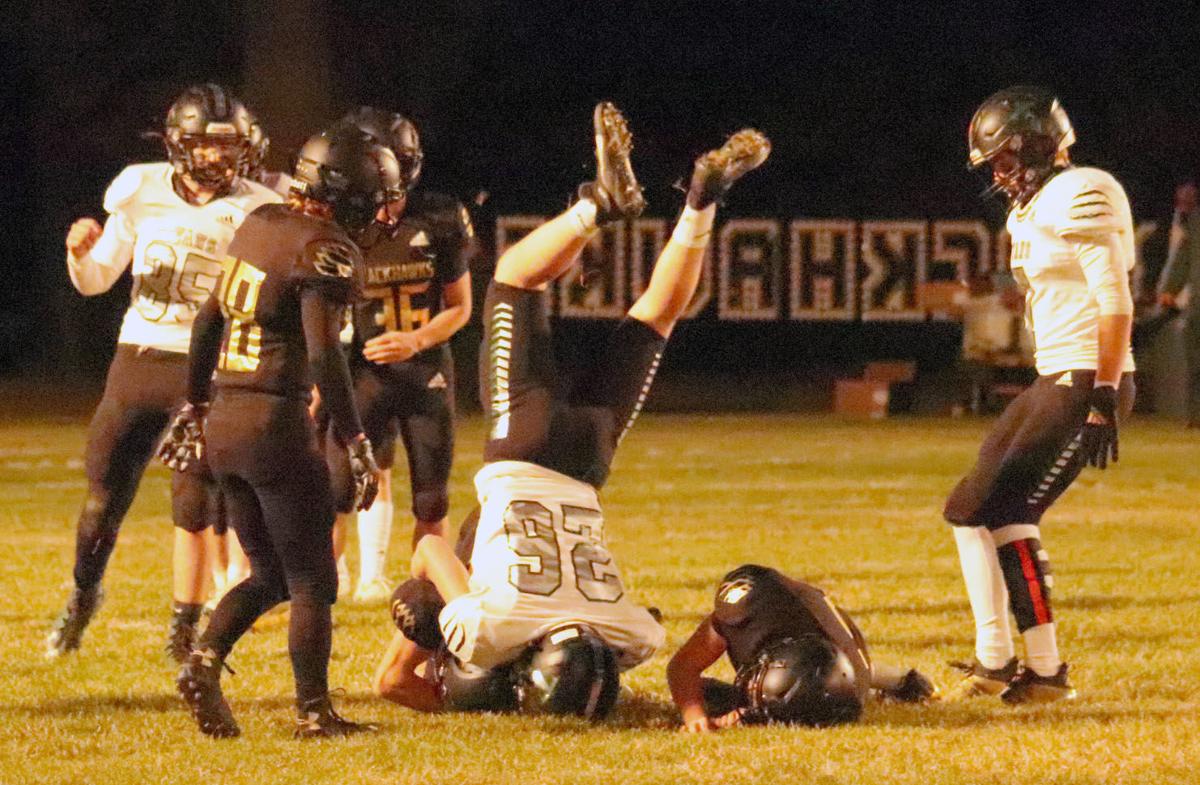 No. 1 Drummond-Philipsburg traveled to Seeley-Swan on Friday night.

No. 1 Drummond-Philipsburg traveled to Seeley-Swan on Friday night.

Will be updated as we receive results.

• No. 1 Missoula Sentinel 32, No. 3 Helena Capital 0: Adam Jones ran for three touchdowns, Zac Crews threw for a fourth and the Spartans (7-0, 5-0) defense clamped down on the Bruins (5-3, 4-2) for their 17th consecutive victory. Jones scored from 3 yards out in the first quarter and from 29 in the second for a 15-0 lead. Quentin Schraeder's 29-yard field goal gave Sentinel an 18-0 lead at halftime. Jones' 4-yard rush made it 25-0 in the third before Crews connected with Easton Leadbetter from 6 yards.

• Great Falls 23, Billings Senior 7: Ryan Krahe scored two touchdowns and Reed Harris threw for one to Krahe and ran for another as the surging Bison (4-4, 4-2) toppled the Broncs (3-5, 3-3) for their fourth straight win. Harris' 1-yard dive in the second quarter gave Great Falls a 10-7 halftime lead. Harris and Krahe then connected from 23 yards out in the third quarter for a 10-point lead and Krahe added insurance with a 2-yard run in the fourth quarter. Jacob Miller gave Senior a brief 7-3 lead in the first quarter on a 1-yard plunge. Tate O'Neill's 23-yard field goal opened the scoring for the Bison.

• Kalispell Glacier 56, Kalispell Flathead 0: Jake Rendina ran for three touchdowns and Gage Sliter threw for three more as the Wolfpack (5-3, 3-3) had no trouble with the winless Braves (0-8, 0-6) in the annual crosstown showdown. Rendina scored from 3, 8 and 1 yards out. Sliter hit Luke Bilau from 15 yards out, Jake Turner from 14 and Connor Sullivan from 7, all in the first half as Glacier built a 35-0 lead. Kash Goicoechea opened the second half with an 82-yard kick return for the Wolfpack.

• Bozeman 38, Bozeman Gallatin 35: In a wild one, Jake Casagranda threw three touchdown passes — two to Jaxon Cotton — and Luke Smith scored twice, once on a 53-yard fumble return, as the Hawks (5-3, 5-1) took over sole possession of second place in the Eastern AA by holding off the crosstown rival Raptors (3-5, 1-5). Smith's 50-yard scoring reception gave Bozeman a 38-28 lead in the fourth quarter, but Garrett Dahlke's third touchdown pass, to Tyler Nansel from 30 yards out, moved Gallatin within three points. The Raptors got the ball back and moved to the Bozeman 17 where they turned the ball over on downs. Dahlke fired two TD passes to his brother Noah Dahlke, from 3 and 47 yards, and Garrett Dahlke also had a 2-yard TD run.

• No. 2 Billings West 49, Great Falls CMR 20: Isaiah Claunch tossed four touchdown passes — two to Taco Dowler — and the Golden Bears (7-1, 6-0) pulled away from a 14-14 halftime tie to trounce the Rustlers (5-3, 4-2). Dowler hauled in scoring strikes of 40 and 78 yards, and Claunch also hit Riley Bergeson for a 26-yarder and Max Murphy on a 3-yarder. Caden Dowler took an interception back 15 yards for a score for West. Raef Newbrough caught a 31-yard scoring pass from Eli Taylor to open the scoring and had a 2-yard run at the final gun to close it.

• Lewistown 21, No. 3 Billings Central 14: Luke Clinton caught two touchdown passes from Chance Fields and Gage Norslien scored the game-winner from 2 yards out with five seconds remaining as the unranked Golden Eagles (6-1, 3-0) flexed their defensive muscles once again for the first win over the Rams (5-2, 1-1) in 35 years. Clinton caught a 56-yarder from Fields to forge a 7-7 second-quarter tie and hauled in a 39-yarder for a 14-7 halftime lead. Kade Boyd, whose 3-yard run gave Central a 7-0 lead, caught a 20-yard TD pass from Adam Balkenbush for a 14-14 tie in the fourth quarter before Norslien's winner. Lewistown has allowed fewer than 10 points to five opponents in addition to the 14 points scored by Central. The Golden Eagles' only defeat is to No. 2 Laurel. Jett Boyce rushed for 131 yards for Lewistown.

• No. 1 Hamilton 48, Libby 14: Tyson Rostad threw five touchdown passes and ran for a sixth as the Broncs (7-0, 5-0) broke away from a 14-6 halftime lead and thumped the Loggers (3-5, 2-3) on the road. Rostad completed 12 of 15 passes for 324 yards and scoring strikes of 55 and 57 yards to Eli Taylor plus TD connections with Liam O'Connell, Tim Zohner and Lucas Lant. Rostad also ran for a 10-yard score. Libby pulled within 14-6 with 1:21 remaining in the first half on a 1-yard run by Ryan Collins. By the time the Loggers scored again, on an 86-yard kickoff return by Sam Rosling, it was 41-14 in the fourth quarter. Hamilton has scored at least 44 points in every game and has allowed more than 14 only once.

• No. 2 Laurel 14, Glendive 10: Kyson Moran threw touchdown passes in the first half to Dalton Boehler and Emmet Renner and the Locomotives (7-0, 3-0) survived a scare from the Red Devils (3-4, 1-2) in a game where all the points were scored in the first half. Moran's 8-yard pass to Boehler gave Laurel a 7-3 lead in the first quarter and a 76-yard stroke to Renner made it 14-3 early in the second quarter, but they would be the Locos' final points.

• No. 4 Polson 35, Browning 0: Jarrett Wilson threw four touchdown passes and ran for the fifth, all in the first half, as the perfect Pirates (8-0, 4-0) coasted past the Indians (2-6, 1-3). Wilson opened the scoring with a 1-yard run and then connected twice with Colton Graham and once each with Xavier Fisher and Alex Muzquiz. The first two, to Graham, covered 15 and 30 yards. The last two, to Fisher and Muzquiz, covered 14 and 50.

• Columbia Falls 35, No. 5 Whitefish 19: Cody Schweikert tossed two touchdown passes to Jace Duval and ran for a third, and Isaiah Roth added two rushing TDs as the Wildcats (5-1, 4-1) handed the Bulldogs (7-1, 2-1) their first defeat. Schweikert connected with Duval from 29 and 33 yards. Roth's second TD, a 20-yarder in the fourth quarter, gave Columbia Falls some breathing room after Whitefish pulled within 21-19 on a 5-yard run by Ty Schwaiger. Ryder Barinowski kicked two field goals for the Bulldogs, from 27 and 37 yards.

• No. 7 Eureka 14, No. 3 Bigfork 13: Remington Little's 3-yard run late in the third quarter gave the Lions (6-2, 3-1) the lead for good and they fended off a two-point conversion in the fourth quarter to hand the Vikings (6-1, 3-1) their first defeat. Patrick Wallen's 1-yard run with 6:35 to play pulled Bigfork within a point, but Wallen's pass to Joseph Farrier fell incomplete and Eureka held on from there. The Lions drew first blood when Caleb Utter rushed for a 2-yard score with 3:39 remaining until halftime, but Wallen hit Nick Walker from 28 yards out two minutes later to send the teams into intermission tied 7-7. Danny Dunn's two extra points proved to be the difference. Utter ran for 81 yards on 19 carries. Bryce Gilliard had 11 tackles for Bigfork and Tristan Butts led Eureka with seven.

• No. 9 Jefferson 29, Manhattan 12: Braden Morris threw two touchdown passes and ran for a third as the Panthers (5-2, 3-1) remained tied for second with Columbus in the Southern B by rolling to a four-TD lead in the first half and holding off the defending state champion Tigers (2-5, 1-3). After a safety, Morris opened the offensive scoring with a 7-yard run in the first quarter and then found Tom Meyer from 25 yards out for a 16-0 margin after the first 12 minutes. Jake Genger was the next recipient of a Morris strike, from 61 yards away for a 22-0 lead. Austin Devers threw two TD passes for Manhattan, a 40-yarder to Corban Johnson in the second quarter and a 21-yarder to Wyatt Jones in the third.

• No. 5 Malta 37, No. 6 Glasgow 6: Rex Williamson rushed for a staggering 237 yards and scored two touchdowns as the unbeaten Mustangs overwhelmed the once-beaten Scotties. Williamson scored on runs of 50 and 14 yards. Teammate Cash Salsbery added 68 yards on the ground. He had scoring runs of 1 and 7 yards. The Mustangs (7-0, 4-0) led the Scotties (6-2, 3-1) 30-6 at halftime. Spencer Gibbs caught a 13-yard scoring pass for Malta. The Mustangs gained 359 of their 418 total yards on the ground. The Scotties finished with 214 yards on offense.

• No. 1 Florence-Carlton 54, Whitehall 7: Pat Duchien threw four touchdown passes — three to Blake Shoupe — and ran for a fifth, and the Falcons (7-0, 4-0) took sole possession of first place in the Western B by trouncing the Trojans (1-5, 1-3). Duchien and Shoupe hooked up from 25, 44 and 5 yards. Tristan Pyette caught the other TD pass, from 38 yards, and also had a 30-yard rushing TD. Miles Hoerauf's 6-yard TD pass accounted for Whitehall's only points.

• Missoula Loyola 50, Anaconda 6: Keenan Russell scored on a 7-yard run and then threw a 40-yard TD pass to Malik Lyttle as the Rams jumped to a 20-0 lead in the first quarter. Talen Reynolds added a 10-yard TD run following a turnover. Reynolds then scored his second rushing touchdown, this one from 4 yards out, to give his team a 27-6 lead with 7:16 left in the first half. Teammate Declan Harrington scored less than a minute later on a 34-yard interception return. Reynolds recorded his third touchdown early in the third period on a 65-yard run and added one more on a 1-yard run after rambling 80 yards to set up the TD. He had 146 of his 188 rushing yards in the second half.

• St. Ignatius 58, Arlee 0: Bryce Umphrey scored three touchdowns and Kellen McClure threw for three as the Bulldogs (5-2, 5-2) routed the Warriors (1-5, 1-5). Umphrey caught a 15-yard pass from McClure, ran 27 yards for a score and returned an interception 20 yards for a TD. Charley Adams had two scores of his own, on a 35-yard run and 23-yard pass from McClure. Not to be outdone, Canyon Sargent added a 40-yard TD reception and 41-yard interception return.

• No. 1 Drummond-Philipsburg 42, Seeley-Swan 6: Tyler Burden ran for two scores and caught a TD pass as the defending state champion Titans (7-0, 7-0) shrugged off a scoreless first quarter to roll past the Blackhawks (3-4, 3-4). Avery Metesh's 4-yard rushing TD with 8:38 to play in the first half broke the ice for Flint Creek. After recovering an onside kick, Burden scored from 5 yards out barely more than one minute later. When Andrew Tallon hit Colt Parsons for an 18-yard score six minutes later for a 22-0 lead, the rout was on. Tallon also connected with Burden on a 32-yard pass, and Burden's 2-yard run closed the scoring for the Titans. Walker McDonald's 62-yard run in the fourth quarter provided Seeley-Swan with its points.

• No. 5 Shields Valley 30, No. 3 Bridger 26: Dylan Flatt scored four touchdowns, including a 1-yard run midway through the quarter for the go-ahead score, as the Rebels (5-1, 3-0) rallied from a 20-8 deficit to knock off the Scouts (6-1, 2-1) and win the South crown. Flatt, who rushed for 166 yards and had 48 receiving yards, hauled in a 10-yard TD pass from Kaden Acosta and his 5-yard run just before halftime pulled Shields Valley to within a four-point deficit. A 1-yard run in the third quarter put the Rebels up by two points before Bridger went back in front with an 11-yard scoring pass from Chance Goltz to Lucius Payovich. That set the stage for Flatt's final heroics. Flatt also led the Rebels with 17 tackles and a fumble recovery. Goltz threw a second TD pass to Baylor Pospisil for Bridger, and Rod Zentner rand Gage Goltz added rushing scores.

'No one runs on us:' No. 1 Missoula Sentinel holds Helena Capital to 41 rushing yards in shutout

The top-ranked Spartans held the third-ranked Bruins to just 77 total yards of offense in a 32-0, shutout win.