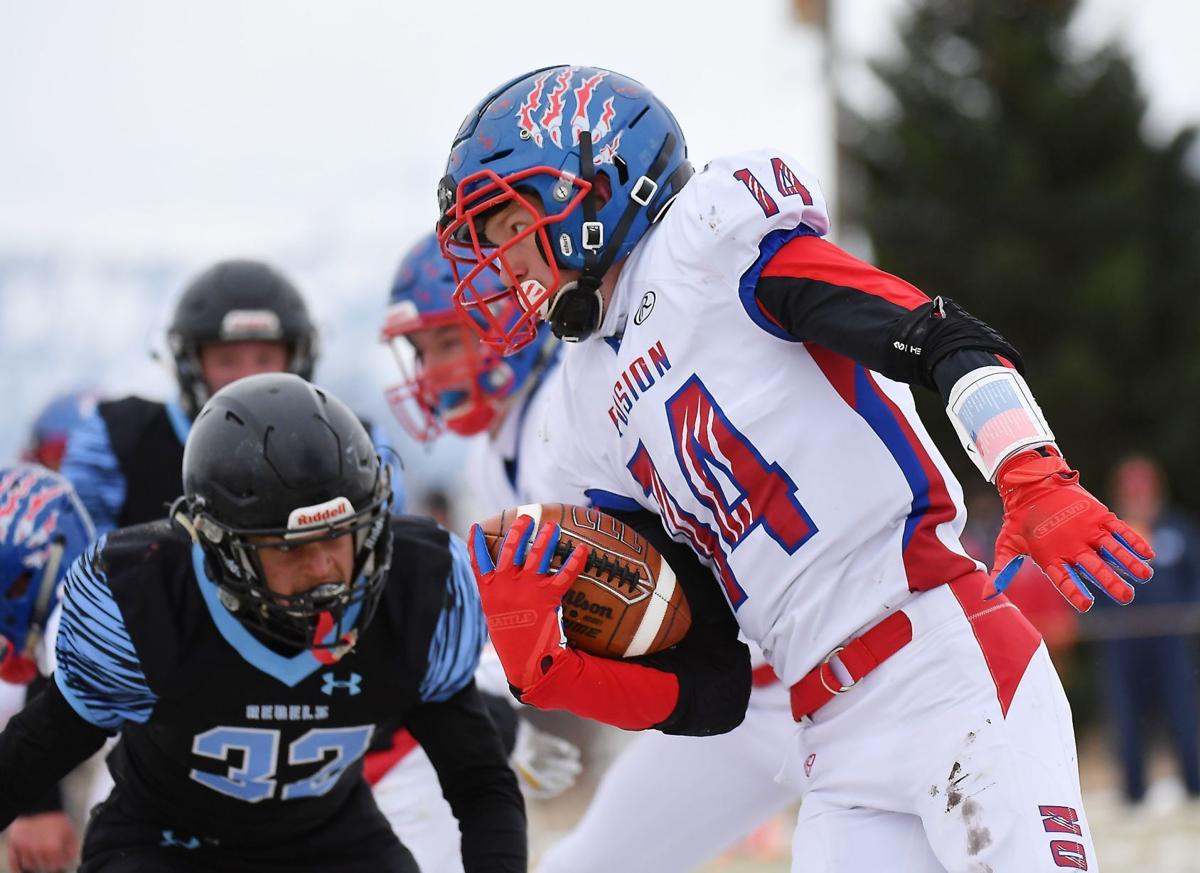 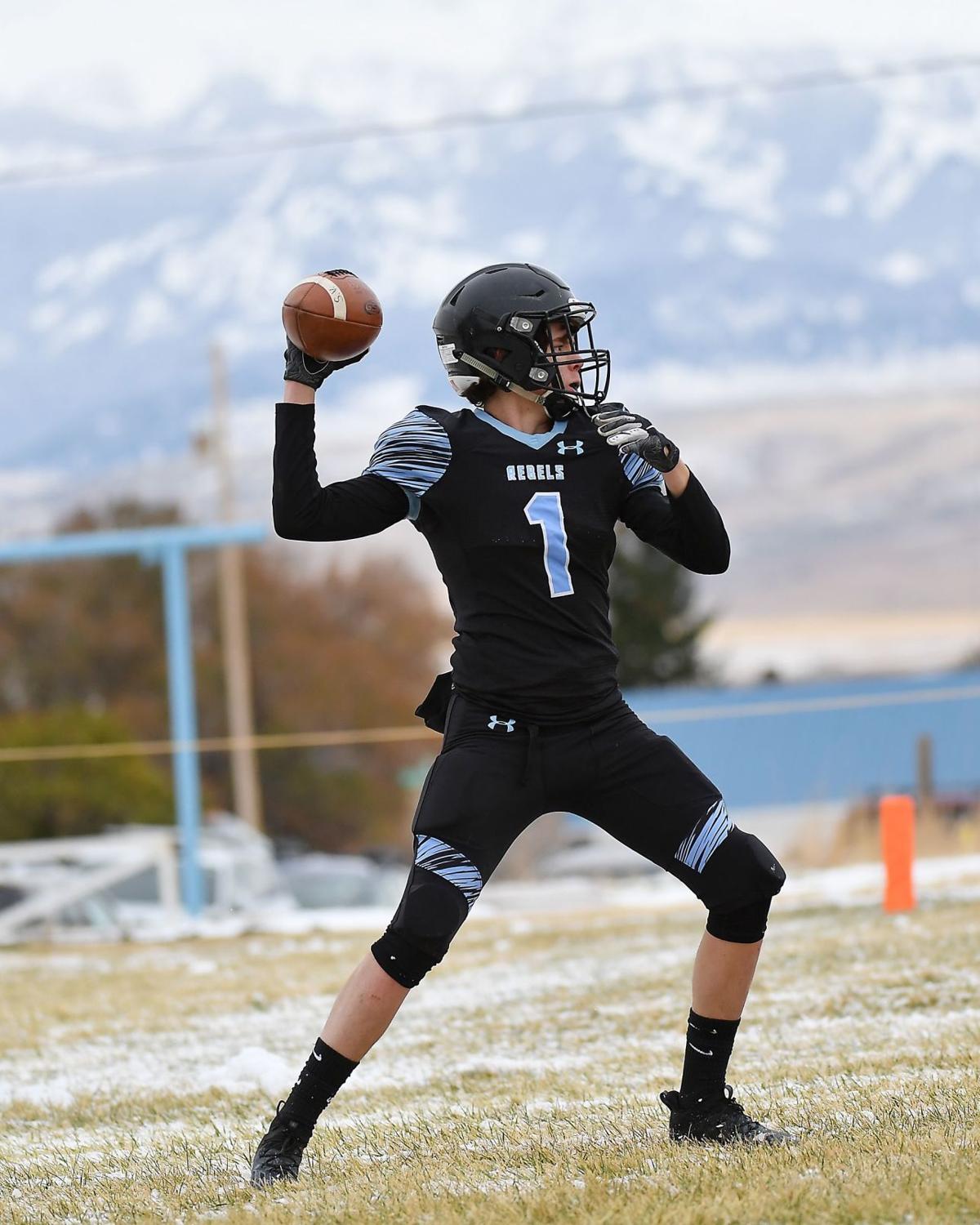 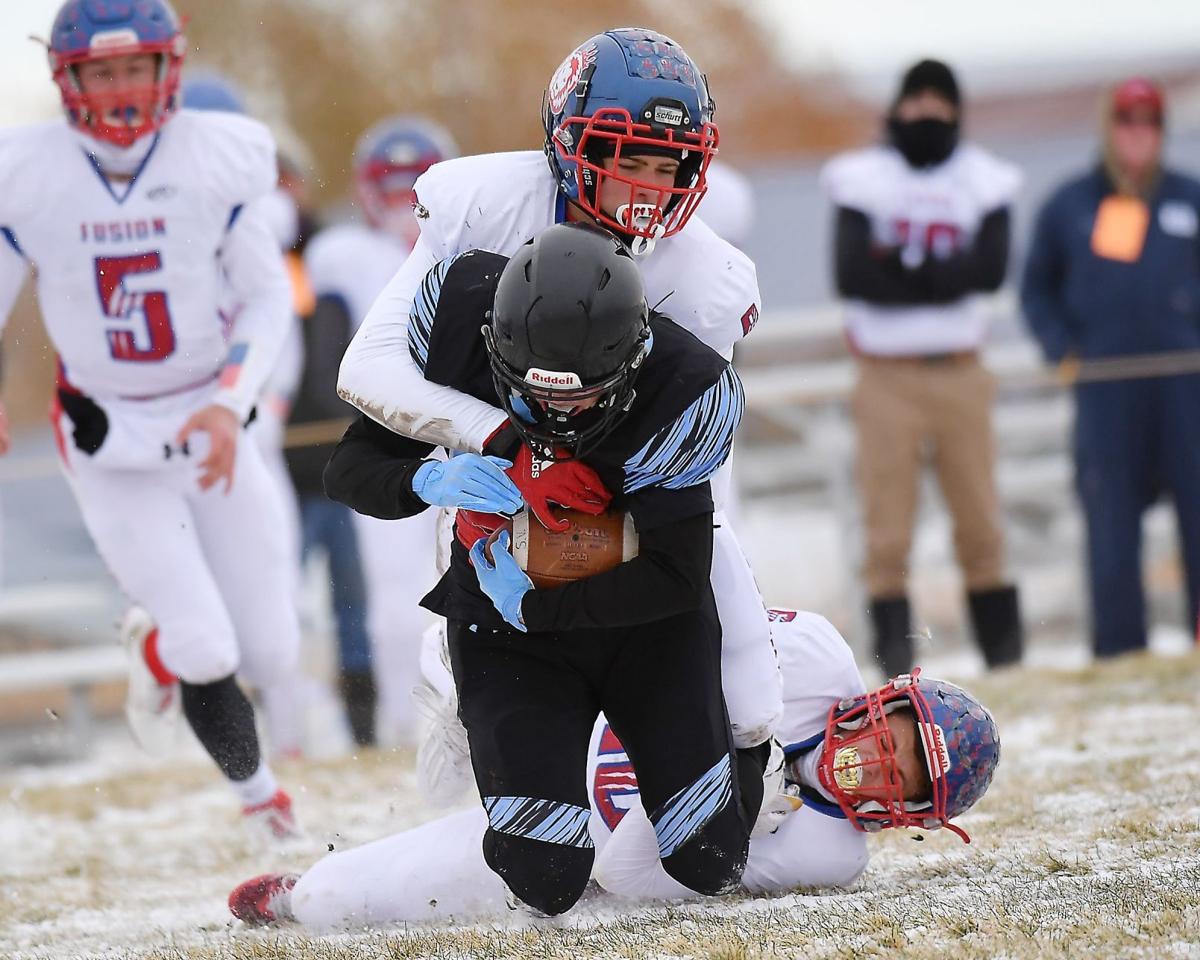 Dylan Flatt of Shields Valley is tackled by Tiegen Cundiff of Richey-Lambert.

Dylan Flatt of Shields Valley is tackled by Tiegen Cundiff of Richey-Lambert.

• Christian Vetter scored five touchdowns in a blizzard to become the sixth player in Butte history to achieve the feat as the Bulldogs toppled Missoula Hellgate 35-16. Vetter's first two scores came from 58 and 51 yards out. Per ButteSports.com, he joins Zach Bunney (2012) Jim Freshmenh (1914), Heath McCloskey (2005), Dallas Cook (2013), Jim Bertoglio (1923) and John Herzog (1954) in achieving the feat, and his 203 yards rushing rank eighth all-time. The Bulldogs (4-3) finish fourth in the Western AA and will face No. 5 Helena Capital in the playoffs next week at home.

• Levi Torgerson caught touchdown passes of 48 and 65 yards from quarterback Reed Harris in Great Falls’ 35-7 victory over crosstown rival Great Falls CMR. Harris also ran for a 52-yard TD and Ryan Krahe had two scores on the ground for the Bison. Jackson Simonson’s 70-yard scamper served as the only touchdown for CMR, which opens postseason play next week at Bozeman. Great Falls will take on Billings Skyview.

• Taco Dowler hauled in the go-ahead touchdown pass from Isaiah Claunch with 5:06 left, and Claunch also scored a rushing touchdown to help No. 2 Billings West finish an undefeated regular season with a 23-19 win over No. 4 Bozeman. West (7-0) is the top Eastern AA seed in the upcoming playoffs and will receive a first-round bye. Bozeman (4-2) will host Great Falls CMR next weekend. Michael DeLeon scored on a 5-yard touchdown run for West, which also received a 26-yard field goal from Spencer Berger. Bozeman’s Elijah Eckles kicked four field goals, including a 41-yarder with 5:49 to play that gave the Hawks a 19-16 lead.

• Top-seeded Missoula Sentinel completed a dominant regular season by throttling Kalispell Glacier 44-0 on a snow-covered field in the Flathead. Dayton Bay threw TD passes of 36 yards to Zac Crews and 25 to TJ Rausch, fellow QB Camden Sirmon ran 41 yards to open the scoring, and Soren Syvrud sprinted 85 fields for yet another TD. Standout Glacier running back Jake Rendina was held to 15 yards on 12 carries. Sentinel averaged 49.1 points a game and allowed 4.7 points for the season, and allowed just 14 points total in the final six games after giving up 19 to Kalispell Flathead in the opener. Glacier had minus-10 yards of offense in the first half. Sentinel receives a first-round playoff bye. Glacier will host Missoula Big Sky.

• Forrest Suero, a defensive lineman converted to fullback, and Ben Swanson ran for touchdowns and that proved to be the difference as No. 2 Helena knocked off crosstown rival Helena Capital 12-6 in a snowstorm. Suero plunged from a yard out and Swanson's run covered 28 yards. Quinn Belcher's 30-yard TD with 4:04 to play gave the Bruins some hope. Chase McGurran's interception sealed the game with just over two minutes to go for Helena after Capital got the ball back. The second-seeded Bengals get a first-round playoff bye and Capital heads to Butte.

• Frenchtown earned the No. 3 playoff seed in the Western A with a 14-6 home win over Libby. Tel Arthur scored in the first quarter to give the Broncs a 6-0 lead. Arthur then scored on a short dive right before halftime on a play set up by Devin Shelton's 34-yard gain on a Wyatt Hayes pass. Arthur added the two-point conversion and the hosts led 14-0 at halftime. Dawson Young scored on a 1-yard dive for the Loggers in the third quarter. Then they got a break when Frenchtown fumbled the ball away. But the Broncs held on for the big win in snowy conditions. Frenchtown will open against Laurel in the playoffs.

• No. 4 Laurel clinched the Eastern A’s second seed with a 21-0 win at No. 5 Miles City. A 3-yard touchdown run from James Ochs accounted for the only points of the first three quarters. Laurel (5-1) made it 14-0 early in the fourth on a 30-yard pass from Eli Aby to Beau Dantic, and Ochs capped the scoring on a 5-yard run with 3:18 to go. Miles City (5-2), which suffered its first loss at Billings Central last week, has been outscored 63-0 in its last two games. The Locomotives lost twice to the Cowboys last season, including 35-7 in the State A title game. Laurel will play Frenchtown and Miles City is at Dillon in the opening round of the playoffs.

• Aden Graves scored Sidney's first three touchdowns and Riley Waters followed up with the next three as the Eagles overpowered Hardin 40-6 in the regular-season finale for both teams.

• Eureka posted a 28-0 home win over Bigfork as Gunnar Smith scored on a 14-yard run and Caleb Utter added a 2-yard scamper as the Lions built a 14-0 halftime lead. Smith added a 13-yard TD run in the third quarter and Tucker Smith had a 3-yard TD run in the final stanza. Gunnar Smith finished with 159 yards rushing on 17 carries. Libby scored in the third quarter on a 1-yard run by Dawson Young.

• Miguel Perez scored on a 29-yard run with 2:52 to play to snap a tie and Fairfield intercepted a pass in the end zone on the final play of the game as the Eagles held on for a 14-8 win in the snow over Glasgow to win the Northern B title. Dylan Nieskens' rushing TD as time expired in the first half for the Scotties sent the teams into intermission knotted 8-8. Fairfield began the scoring on a 40-yard pass to Gavin Mills from Guidry Giles in the first quarter. Glasgow finishes as the North's No. 3 seed.

• Jay Jetmore ran for three touchdowns and caught a fourth as Red Lodge forged a three-way tie in the Southern B by trouncing first-place Shepherd 40-14 after some eight inches of snow were removed from the field. Jetmore's runs covered 2, 54 and 10 yards, and his 18-yard catch from Trey Allen opened the scoring in the first quarter. Red Lodge led only 13-7 at halftime but outscored the Mustangs 14-0 in the third quarter, including a 1-yard run by Allen. Braden Lammens' 2-yard pass from Shawn Garcia-Spindel in the second quarter put Shepherd on the board, and Alex Stene finished the Mustangs' scoring with a run. Red Lodge earned the conference's top seed, followed by Shepherd and Huntley Project.

• Caden Holgate threw two touchdown passes and Toby Veltkamp scored twice -- once through the air, once on the ground -- and Manhattan rallied from an early one-point deficit to score 18 consecutive points and down Jefferson 24-13 to complete an unbeaten regular season. Braden Morris' 28-yard scoring pass to Tom Meyer and Dylan Root's extra point boot gave Jefferson a 7-6 halftime lead. But Holgate and Veltkamp connected from 22 yards away in the third quarter and Veltkamp opened the scoring in the fourth quarter with a 10-yard run. Gabriel Delgatty then landed a 27-yard pass from Holgate to put the game away for the defending state runners-up.

• Charley Crawford ran for a touchdown and threw for another as Arlee rallied from a 12-point first-quarter deficit to topple Darby 30-12. Crawford tossed a 14-yard pass to Noah Carlson. The Warriors scored 14 second-quarter points for a two-point lead at halftime and added 16 points in the fourth quarter. Colt Crawford also scored for Arlee, on a 1-yard run. Arlee finishes sixth and Darby ninth in the West.

• Tristan Subatch scored the game's only points on a run in the fourth quarter to give Plains a 6-0 victory over Seeley-Swan. Plains finishes seventh and Seeley-Swan eight in the West.

• Big Sandy’s Kade Strutz rushed for 279 yards and six touchdowns as the Pioneers ran past Wibaux 57-6 in the first round of the playoffs. Strutz scored three of his TDs in the second quarter — including a 75-yarder — as Big Sandy took a 32-0 lead into halftime. Jonathan Harris scored the only touchdown for Wibaux, a 50-yard pass from Colten Miske in the third quarter. Kody Strutz passed for two TDs and Braydon Cline caught one for the Pioneers.

• Kaden Acosta was 16-for-22 passing for 282 yards and four touchdowns — two apiece to Aiden Jenkins and Dylan Flatt — to lead unbeaten Shields Valley past Richey-Lambert in a first-round matchup in Wilsall. Acosta also had 10 tackles and an interception. Jenkins, who had 19 tackles and an interception, caught six tosses for 171 yards, and Flatt had seven for 92. The Rebels led 21-0 at halftime.

• Sam Davis tossed seven touchdown passes -- three to Caden West and three to Alex Novark -- and Andrew Davis ran for two scores as White Sulphur Springs trounced Sunburst 78-21. The Hornets actually trailed 14-12 at one point but blew open the game in the second quarter to lead 58-14 at intermission. Stanley Jarvis scored twice for the Refiners, one on a kick return. Sam Davis completed 12 of 15 passes for 340 yards. Novark, who shared the team lead with nine tackles and provided a rushing TD, had five catches for 123 yards, and West had four grabs for 145 yards.

• Colter Wolstad threw for four touchdowns in a playoff-opening win for No. 8 Harlowton-Ryegate, 38-14 over Noxon. Wolstad completed a 13-yard TD pass to Johnny Mysse in the first quarter, threw for scores of 27 and 40 yards to Ryan Finley in the second and tossed a 20-yarder to Mysse in the third to put the Engineers (6-1) up 26-0. Cole Blatter recovered a fumble and returned it for a touchdown at the end of the third quarter. Josh Baldwin scored both TDs for Noxon (2-3), on a 39-yard run in the third quarter and a 19-yard pass in the fourth.

• Brook Smith provided eight kills and 17 digs, Emma Trieweiler chipped in with five kills and 13 digs, and Ells Mikenna added nine assists, five digs and two blocks for Whitefish in a 25-20, 25-23, 26-24 loss to Columbia Falls. Ashton Ramsey had 20 digs and Jenny Patten 10 assists for the Bulldogs. No statistics were reported for Columbia Falls.

• Maddie DeVries was tops with seven kills, Adie Woodhall added nine assists and five aces, and Sydney Von Bergen provided 20 digs for Denton-Geyser-Stanford in a 25-16, 25-23, 25-18 triumph over Broadview-Lavina. Mese Econom had five aces for the Bearcubs. Berlin Sanguins had five kills, Adi Tuszynski provided 27 digs and three aces, and Callie Beckett chipped in with eight assists for the Pirates.

• Tiara Whitmus had seven kills, 20 digs, four aces and a block, and Aubri Holzrichter contributed 12 assists, 13 digs and two aces for Lustre Christian in a 23-25, 25-12, 25-21, 25-21 loss to Bainville. Grace Brown had nine digs and four blocks, and Ashley Ohara added 13 digs and Alexa Reddig seven digs and three blocks for Lustre. No statistics were reported for Bainville.

Class A boys: It was a day for Colters at Rebecca Farm as Hamilton's Colter Purcell finished first in 16:17.52 and teammate Colter Kirkland was second in 16:40.26 to lead the Broncs to a runaway state championship with 35 points. Ronan's Brant Heiner was third (16:46.80) and Bryson Rogers was fourth (16:47.76) to help Hardin finish second, 19 points behind the Broncs. Tanner Nead of Hamilton (16:48.01) rounded out the top five. Columbia Falls was third, four points ahead of Corvallis and another 16 below Ronan.

2020 first round of the Montana high school football playoffs

Coverage of the first round of the high school football playoffs in Montana.

Photos: Butte takes down Missoula Hellgate in football under heavy snowfall in Missoula