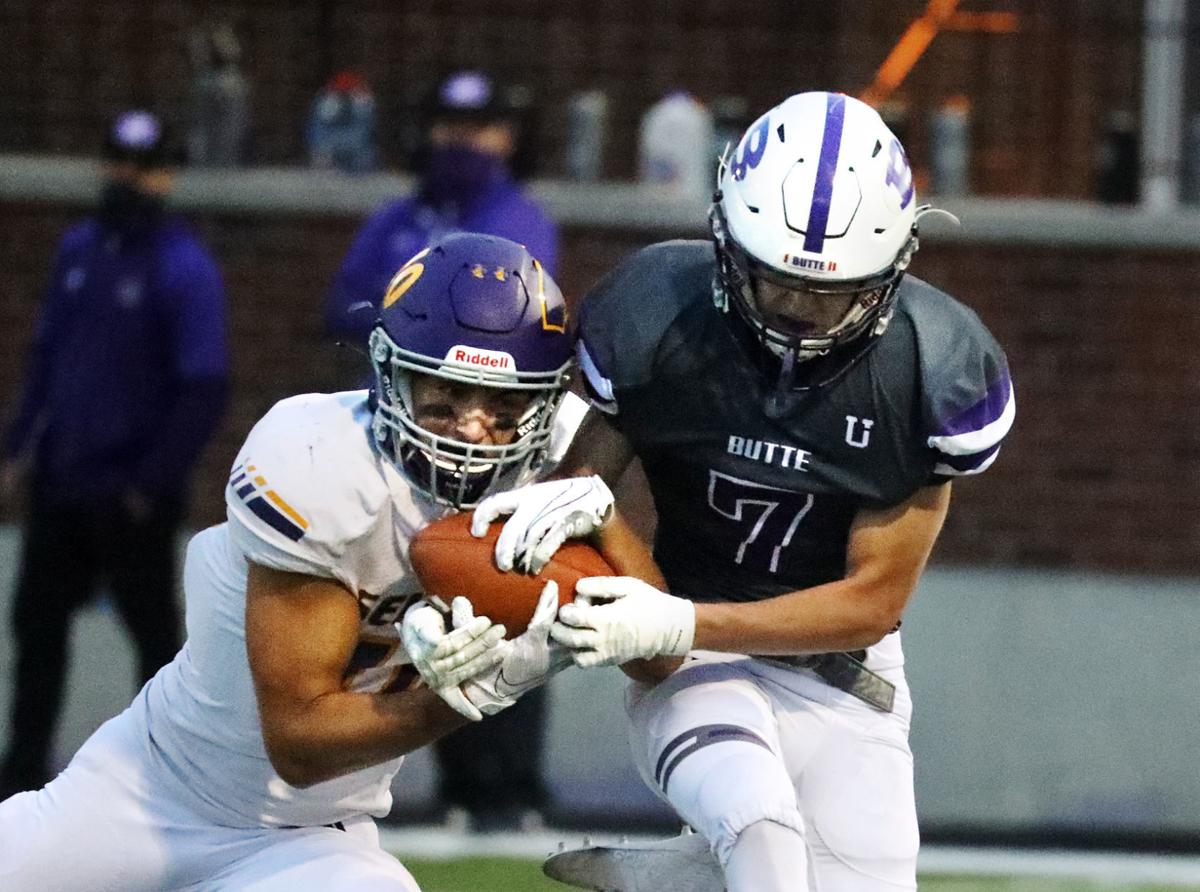 Butte's Rylan Richards grapples for the ball with Missoula's TJ Rausch in the first quarter of the Bulldogs' homecoming game against Missoula Sentinel on Friday night. 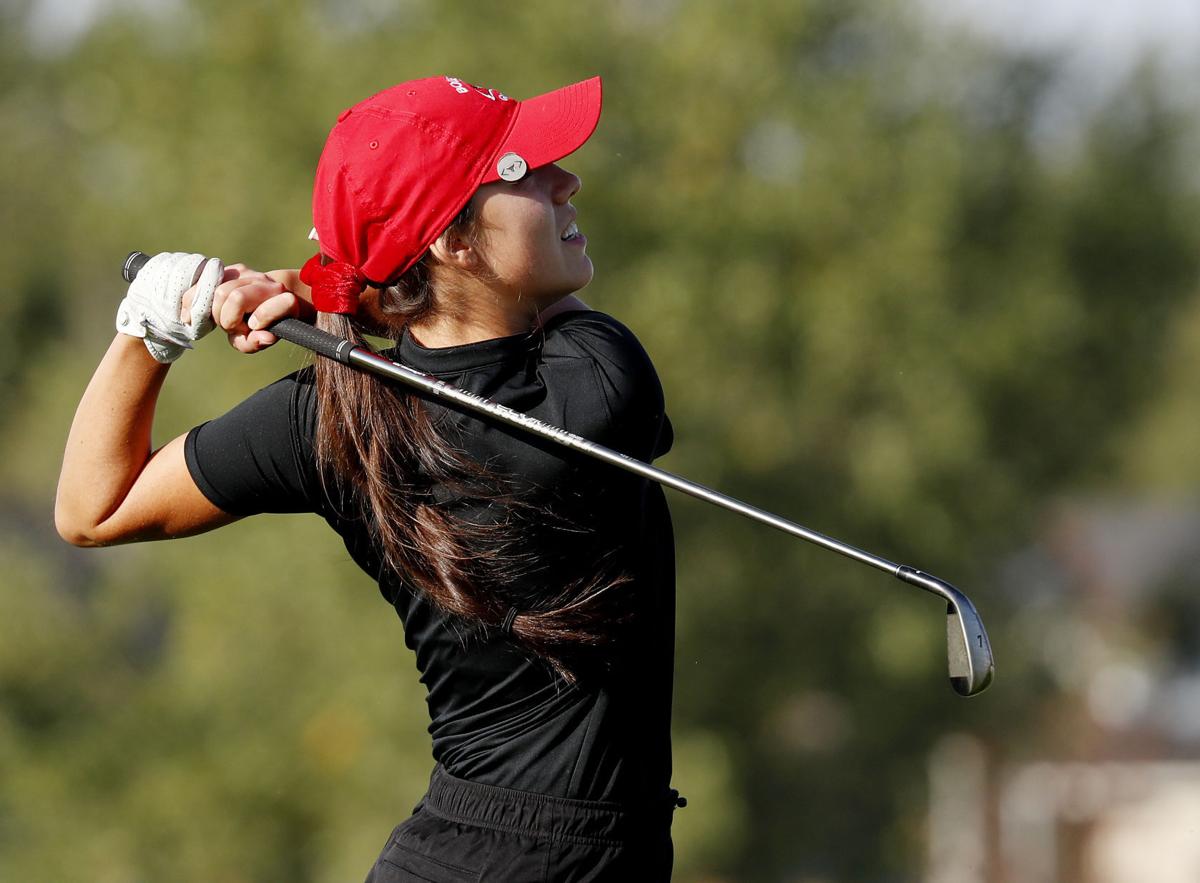 Butte's Rylan Richards grapples for the ball with Missoula's TJ Rausch in the first quarter of the Bulldogs' homecoming game against Missoula Sentinel on Friday night.

• Top-ranked Missoula Sentinel boosted its record to 3-0 with a 52-7 blowout win at Butte. The Spartans scored on their first four possessions. Camden Sirmon hit Haiden Crews for a 43-yard TD pass to open the scoring. Charlie Kirgan's 1-yard dive helped make the score 14-0. A double pass resulted in a TD reception for TJ Rausch. Kirgan and Dayton Bay later scored on short run plays to make the score 35-0 at halftime. Camdin Dirnberger's 36-yard field goal started the second-half scoring for Sentinel. Kirgan later scored on a 46-yard pass and Sirmon scored on a 37-yard run.

• Dylan Goodell threw for one touchdown and rushed for another as Billings Skyview snapped a 22-game losing streak with a 20-0 victory over Great Falls CMR. Reigan Picicci also rushed for a short touchdown for the Falcons, who won for the first time in nearly three years. Skyview's most recent victory came on Oct. 19, 2017, against Butte High.

• Jake Rendina scored four touchdowns -- three in the third quarter -- and fifth-ranked Kalispell Glacier overcame an early touchdown deficit to topple Missoula Big Sky 36-18. Big Sky capitalized on a Wolfpack fumble in taking a 6-0 lead on a Colter Janacaro 3-yard run, but Rendina scored on a 9-yard run as the hosts built an 8-6 halftime lead and then broke it open with his three third-quarter scores. Wyatt Thomason added a 13-yard TD scamper in the fourth frame for Glacier. Big Sky scored two late TDs — one on a Tre Reed 19-yard pass from Janacaro and one on a Janacaro 5-yard run.

• Marcus Evans returned an interception for a score and also rumbled in from 2 yards out in the first quarter as No. 3 Helena (3-0) trampled Missoula Hellgate 55-14. Kaden Huot followed by tossing two touchdown passes to Chase McGurran. Jake Sweatland had a 70-yard touchdown run late in the game for Hellgate, which had four turnovers.

• Montana State commit Neil Daily caught an 89-yard touchdown pass, which was just one highlight for Billings West in a 70-0 blowout victory over Bozeman Gallatin. Jaymn Medlock scored two touchdowns for the Golden Bears, including a 20-yarder to make the score 28-0. West led 42-0 at halftime. Medlock also returned two interceptions for TDs in the third quarter, one of which went for 95 yards.

• Junior Bergen, Bubba Bergen and Jacob Miller scored two touchdowns apiece to stake No. 2 Billings Senior to a 42-point first-half lead and the Broncs coasted to a 59-21 victory over Belgrade. Wyatt Lamberth ran for two scores for the Panthers, both on 1-yard runs.

• Tyson Rostad ran for a touchdown and tossed another to Jaiden Clemundt as top-ranked Hamilton allowed the first touchdown and then scored the next three for a 21-6 win in a showdown over Frenchtown. Liam O'Connell salted the game away for the Broncs with a 20-yard fumble return in the fourth quarter. Frenchtown opened the scoring with a 26-yard scoring strike from Wyatt Hayes to Devin Shelton.

• Keaton Potter ran in a 6-yard TD to get things going for Lewistown in the second quarter and the Golden Eagles went on to shut out Havre 21-0. Teammates Seth Norslien and Luke Clinton connected in the third for another TD to make it 14-0 and Norslien rushed from 3 yards out in the fourth.

• Cormac Benn scored four touchdowns and No. 8 Bigfork rolled all over Missoula Loyola 42-0. Benn, a Loyola transfer, scored on a 1-yard plunge and a 2-yard dive in the first quarter, added a TD run from 6 yards away for a 19-0 halftime lead, and late in the third quarter made it 27-0 with a 35-yard TD scamper. Bigfork then added a defensive touchdown when Wyatt Herd intercepted a pass and struck paydirt.

• Jesse Lee rushed for 83 yards and two touchdowns as No. 3 Glasgow improved to 5-0 with a 64-8 triumph over visiting Harlem. The Scotties rushed for 162 yards, with Loden Idler, Kyler Hallock, Dalton Sand, Nik Burke and Tatum Hansen also scoring rushing TDs. Glasgow led 40-0 after one quarter and 56-0 at halftime. Idler passed for 57 yards and also had a 24-yard rushing TD. Glasgow's Mayson Phipps returned a fumble 37 yards for a score and also recorded a sack for a safety.

• Trey Hoveland threw two touchdown passes and ran for two more scores to lead No. 9 Townsend past Jefferson 35-14 in the annual Elkhorn showdown. Hoveland opened the scoring with a TD pass to Dawson Sweat and then ran from 8-yard run for a 14-0 first-quarter lead. Hoveland also hit Gavin Vandenacre for 71 yards and gave the Bulldogs a 28-7 lead with an 8-yard run early in the fourth quarter.

• Cash Salsbery and Rex Williamson ran for two touchdowns apiece and Jeramiah Benson returned a punt 53 yards for a score to power No. 5 Malta past Shepherd 35-14. Salbery's runs were from 1 yard out and Williamson scored from 3 and 34 yards. Shawn Garcia-Spindel threw two TD passes for the Mustangs, a 9-yarder to Chase Schacht and an 8-yarder to Colter Zink.

• Rye Brastrup had a field day with five touchdowns and No. 5 Joliet improved to 4-0 by scoring 38 points in the first quarter and overpowering Twin Bridges 62-12. Brastrup opened the game with a 70-yard kickoff return and also had scoring runs of 54, 10, 36 and 61 yards. Quarterback Tyson Cook tossed three touchdown passes for the J-Hawks, who have outscored their opposition 222-46.

• Gavin Regalado scored six touchdowns, and Tristan Subatch threw for one and ran for another as Plains overpowered Victor 64-20. The Horsemen led 42-12 at halftime.

• Kade Cutler threw two touchdown passes and ran for two more, and Avery Metesh and Preston Metesh each scored twice as No. 2 Drummond-Philipsburg cruised past No. 7 Charlo 46-0 in a battle of 8-Man West unbeatens. Cutler's scoring tosses went to Ethan Parke and Avery Metesh.

• Canyon Sargent scored one touchdown on a run and another on a pass as St. Ignatius spoiled Darby's homecoming with a 34-14 win in the rain.

• Thompson Falls improved to 5-0 by blitzing Arlee for a 52-0 win. Roman Sparks scored on two run plays before Lucas Andersen struck paydirt on a 70-yard pass from Sparks. Kade Pardee added two TD runs and Trae Thilmony one. The Blue Hawks have pitched four consecutive shutouts, outscoring their opponents 202-0 since opening the season with a 38-32 win over St. Ignatius.

• Kaden Acosta completed 22 of 24 passes for 359 yards and six touchdowns as No. 3 Shields Valley kept rolling with a 50-30 win over No. 6 Broadview-Lavina in a battle of 6-Man South unbeatens. Dylan Flatt caught five passes for 133 yards and four TDs, and Aiden Jenkins hauled in 11 catches for 226 yards and three scores for the Rebels. Hank Tuszynski's four rushing TDs paced Broadview-Lavina, which entered the game unbeaten and unscored upon.

• Bailey Nowicki had eight kills, three blocks and two aces, and Taylor Lee contributed seven kills for Miles City in a 25-17, 15-25, 25-18, 25-22 victory over Havre. Carmella Prete had 17 digs and six assists, and Ryleigh Simonsen provided three aces for the Cowgirls.

• Josie Thomas led with 11 kills, four aces and six digs, and Ellie Reinertson had an all-round big night with six kills, five digs, three aces and a block to carry Gardiner in its 25-6, 25-13, 25-15 sweep of Lima. Chase Cunningham did her part for the Bruins with 28 assists, six digs, four aces, three kills and a block.

• Olivia Isakson was tops with 11 kills and three blocks, and CarolAnn Herring added four kills and three aces for Augusta in a 25-15, 25-20, 25-20 sweep of Sunburst. Macyn Mahlum had eight assists and five digs for the Elk, who also received seven assists and four digs from Rylee Shatz. Sunburst was led by Laura Meyer with four kills and nine digs, and Tara Robins with 13 digs and two aces. Jeena Alborano had four aces.

• Koree Marchwick of Culbertson had four aces and 14 kills to help beat Scobey 25-18, 27-25, 25-19. Cowgirls teammate Kylie Portra chipped in 13 kills and two blacks. Scobey’s Ryleigh Backman had a strong presence at the net with eight kills and five blocks.

• Justus Verge of Bozeman Gallatin won the boys meet and Bozeman's Sami Yates took first for the girls at Lake Hills Golf Course in Billings. Verge shot a 69 for an overall score of 136 to win by seven strokes over Great Falls CMR's Eli Groshelle. Yates shot a 74 to end up with 149 and win by four strokes over teammate Cooper Knarr. Verge's effort led Gallatin to the team title by 30 strokes over Billings Senior and 76 over Billings West. Bozeman took the girls tournament by 29 strokes over West and 35 over Senior.

• Ezra Epperly of Kalispell Flathead was the boys winner and Kodie Hoagland of Butte was girls medalist after the two-day event at Fairmont Hot Springs. Epperly had a two-day score of 149, two shots better than Missoula Sentinel freshman Kade McDonough. The boys title, however, went to Kalispell Glacier, which had all five golfers shoot in the 70s to finish ahead of Missoula Sentinel. On the girls side, Hoagland finished two strokes ahead of teammate Ella Prigge as Buette won the team title by 64 shots over Helena Capital.

The Falcons had lost 22 straight games dating to the final game of the 2017 season.