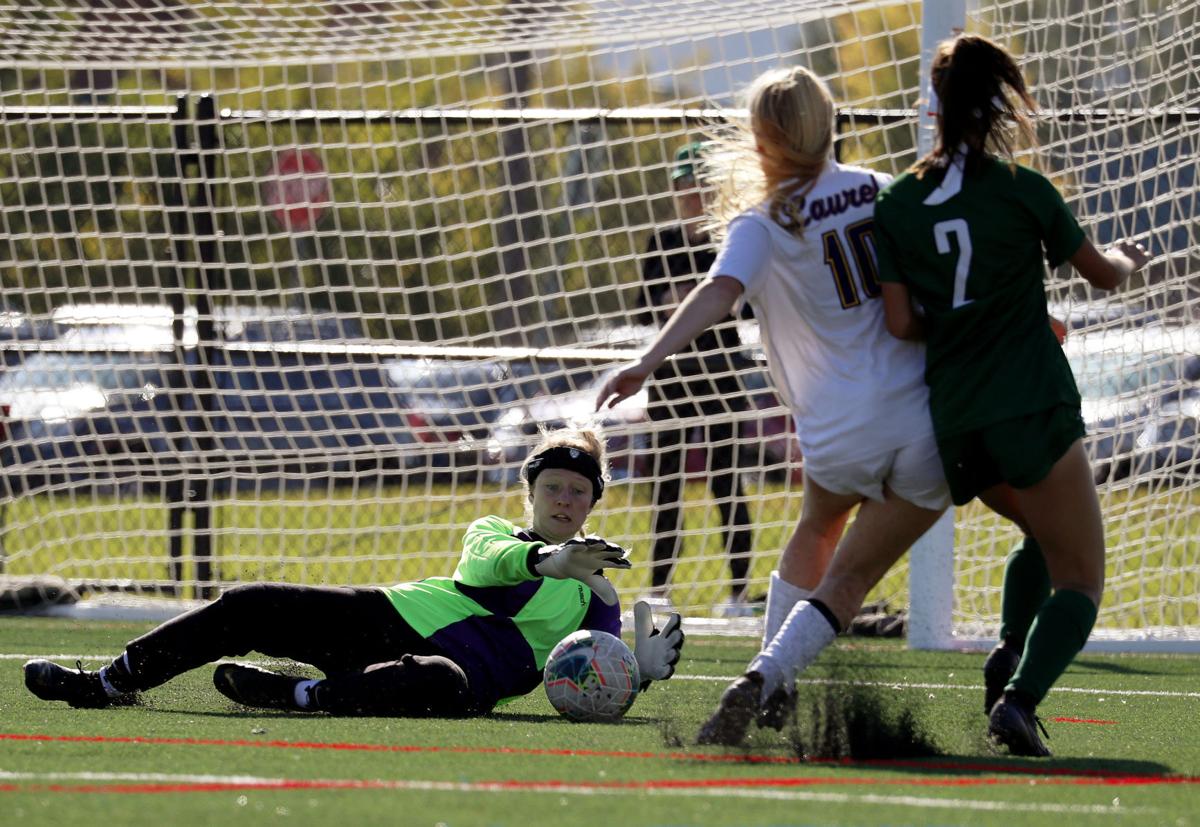 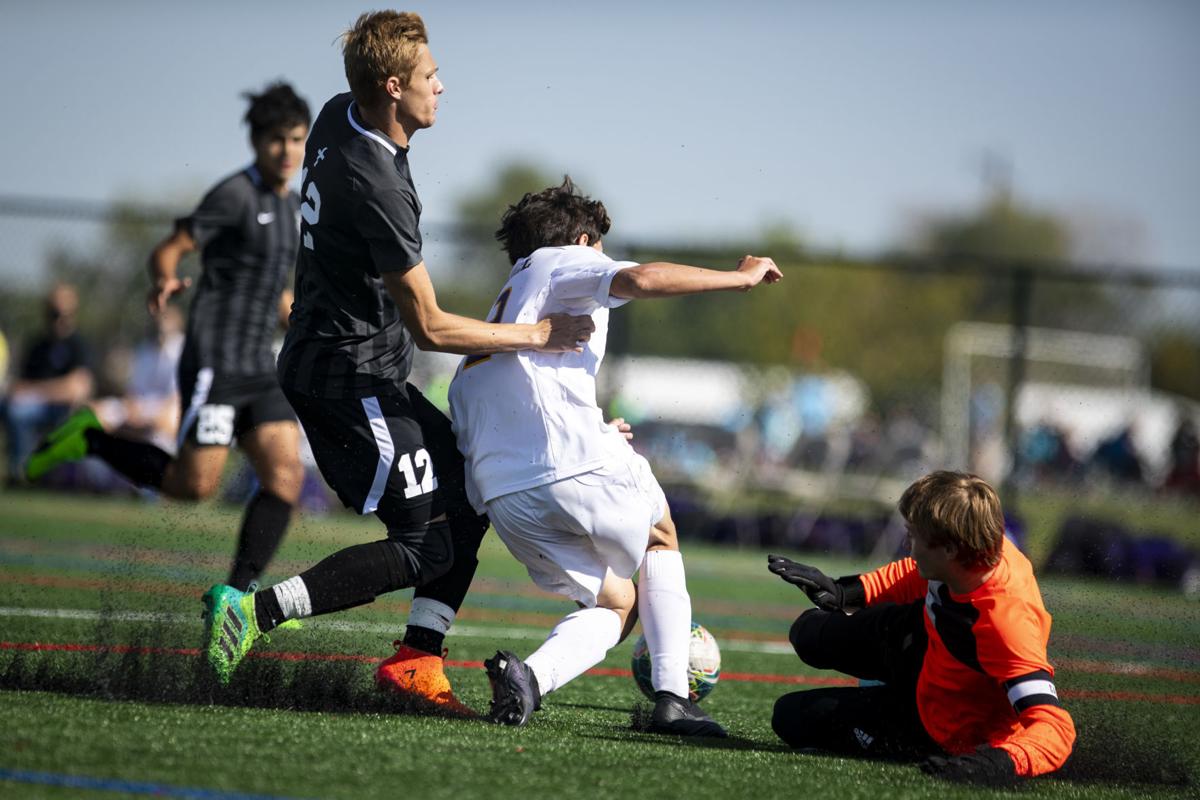 Billings Central's Camden Capser (12), Laurel's Everett Hilliard (12), and Laurel's Noah Berg (3) get tangled up near Laurel's goal during the Laurel Locomotives' game against the Billings Central Rams at Amend Park in Billings on Saturday.

Billings Central's Camden Capser (12), Laurel's Everett Hilliard (12), and Laurel's Noah Berg (3) get tangled up near Laurel's goal during the Laurel Locomotives' game against the Billings Central Rams at Amend Park in Billings on Saturday.

• Robert Crosbie rushed 17 times for 274 yards and five touchdowns, and added a 30-yard interception return as Victor snapped a 16-game losing streak by downing Troy 70-52. It's the Pirates' first win since downing Plains on Oct. 6, 2018. Carson Varner ran for three TDs and threw for another, and Canyon Parks caught a scoring pass. Winless Troy has lost 11 straight dating to a 24-point win over Victor last season.

•  Columbia Falls won two home matches against Corvallis and Hamilton. The Wildcats beat Corvallis, 26-24, 25-9, 25-8. Hannah Schweikert had nine kills, 26 assists, 12 digs, 2.5 blocks and two aces in the win over Corvallis, leading the team in all of those stats except digs. Dillen Hoerner and Lauren Falkner added eight kills apiece. McKenna Rensel led with 14 digs, and Hoerner added 12 digs. Corvallis' Madeline Gilder and Jenna Jordan each had seven kills, and Gilder led with 11 digs. Against Hamilton, Columbia Falls won in four sets, 25-19, 25-16, 22-25, 25-19. Mady Hoerner puts down a team-best 17 kills for the Wildcats. Falker added 14 kills and three aces and one block. Schweikert paced Columbia Falls with seven aces and 41 assists. Grace Gedlaman had two blocks, and Rensel had 16 digs. Hamilton's Camas Catty had a team-high six kills and three blocks.

• Josie Hasler had 14 kills, 11 digs, three aces and a block as Huntley Project kept rolling with a 25-12, 25-21, 25-14 sweep of Forsyth. Macee Murphy did her part with four kills, 21 assists, two blocks and six digs, and Greta Peterson added eight kills and four digs for the Red Devils.

• Makenna Bushman came up big with 10 kills, three blocks, nine digs and three aces, and Kyelynn Coombe added five kills, 10 digs and a block to get Joliet back on the winning track with a 25-14, 25-11, 25-11 sweep of Big Timber. Merrin Schwend added 20 assists and 10 digs for the J-Hawks.

• Emma Lensing scored the game’s only goal as Billings West held on to first place in the Eastern AA with a 1-0 win over Great Falls. Satory Taylor contributed on the assist for the goal, which was Lensing’s 12th of the season. The Golden Bears also recorded their eighth clean sheet of the season.

• Sydney Robbins scored the tiebreaking goal shortly after halftime and Billings Skyview held on for a 3-2 win over Great Falls CMR. Robbins scored two times and Ave Roberts also tallied for the Falcons, who won their fourth consecutive match. The match was tied 2-2 at the half. CMR goal scorers were not provided.

• Billings Central scored six second-half goals on its way to a 7-0 win over Laurel. Sam Dull scored three goals and had two assists, and Mauricio Gaytan added two goals for the Rams, who held on to their first-place standing in the Eastern A with a 3-0-1 record, 4-1-1 overall. Camden Capser and Felipe Gnecco also scored for the Rams, who had plenty more chances but were stymied by Laurel keeper Noah Berg. Laurel slipped to 0-3-1 and 0-5-1.

• After a scoreless first half, Gabe Menicke scored three goals and two-time defending state champion Whitefish extended its unbeaten streak to 38 by swamping Columbia Falls 5-0. Brandon Mendoza had a girl and three assists for the Bulldogs, whose other marker was tallied by James Thompson.

• Maeson Cotter pounced on a rebound chance and her second-half goal helped Laurel top Billings Central 2-1, giving the Locomotives control of the Eastern A with two matches to go. Abby Derbyshire put the Rams in front 1-0 but Laurel benefited from an own goal four minutes later on a corner kick to equalize. After Central keeper Olivia Tourtlotte stopped a shot from Mya Maack, Cotter was there to slot home the deciding goal and improve the defending champ’s record to 3-0-1 and 5-0-1. Central, last season’s runner-up, fell to 2-1-1 and 4-1-1.

• Tia Mercer had four goals and four assists as Polson downed Libby 10-0. Mercer scored the first two goals and then added two more after the break. Kyla Heiser had three assists and a goal for the Pirates, and Megan Rost tacked on eight saves in goal. Polson held control of the ball for 68% of the match and 16 shots on goal.

• Ali Hirsch and Brooke Roberts each had first-half goals and Whitefish improved to 8-0-1 by edging rival Columbia Falls 2-1. Maddie Robison scored the Wildkats' only goal.

• The Havre boys and girls swept the Malta Athletic Club Invitational as Caleb Tomac and Tamera O’Leary won individual titles. Tomac won the boys race in 18:13, ahead of teammates Dylan Young and Riley Pleninger, who placed second and third. O’Leary crossed in 21:41 to claim the girls race, leading four Blue Ponies ahead of the pack. Sadie Filius took second in 21:42.

• Sophomore Natalie Wood of Big Timber finished first in the girls race and junior Brandon Emineth of Red Lodge edged junior teammate Elijah Quick for the gold medal in the boys race at the Big Timber Invitational. Wood finished in 20:17.48, 27 seconds ahead of sophomore Kelly Plymale of Columbus. Emineth's time of 17:23.19 was five seconds ahead of Quick.

• Helena's Kylie Hartnett won yet another race, finishing in 18:29 in as the Bengals finished first in a five-team event at Butte's Highland View Golf Course. Helena's Odessa Zentz was second in 19:18 to help her team to 32 points, well ahead of Helena Capital's 43 and Missoula Sentinel's 46. Butte's Hailey Nielson was third in 19:40.5. For the boys, Missoula Sentinel took the top four spots and was the team winner with 17 points, followed by Helena Capital at 42. The Spartans' Tanner Klumph led the way in 16:03.8, followed by Wyatt Mortenson (16:06.1), Corbin Johnson (16:36.1) and Keagen Crosby (17:01.4).

• Wyatt Barney finished first in 18:01 and Manhattan took the top four spots in a meet at Headwaters State Park near Three Forks. The Tigers' Luke Meeker was second in 18:23, followed by Layne Vanderby (18:38) and Payden Cantalupo (1842). In the girls race, Hallie Hemenway of Manhattan finished in 20:06 to out-duel Emma Stolte of Townsend, who was 33 seconds back. Three Forks' Jayden Woodland was third in 21:02.

• Glasgow's Iris McKean was the girls winner and Miles City took the team title at the Miles City Invitational. McKean's winning time was 19:38.87, nearly 10 seconds ahead of Annie Kaul of Plentywood and another 28 better than Ellie Brown of Miles City, which won the team title with 37 points -- 33 ahead of Lewistown. In the boys race, Samuel Smith of Richey-Lambert took gold in 16:03.79, followed by Ben Archer (16:43.93) and Jalen Robinson (16:44.81) of Lewistown, which ran to the team crown with 39 points. Livingston was second with 61 and Miles City third at 88. Smith has the top time in the state in all classes this year, running 15:54.7 at the Scottie Invitational on Sept. 19.

• Ronan runner Brant Heiner won the Mission Shadown Duels in 16:25, well ahead of second-place Hamilton's Colter Purcell, who finished second in 16:47. Hamilton took the boys meet with a score of 18, and Columbia Falls won the boys event with a score of 20. Whitefish finished second in the boys race and Polson was the runner-up in the girls meet. Hamilton's Brynnli Poulsen won the girls race in 19:34 and Lara Erickson of Columbia Falls was second in 20:31.

For the first time since October 2018, the Victor Pirates football team is back in the win column.