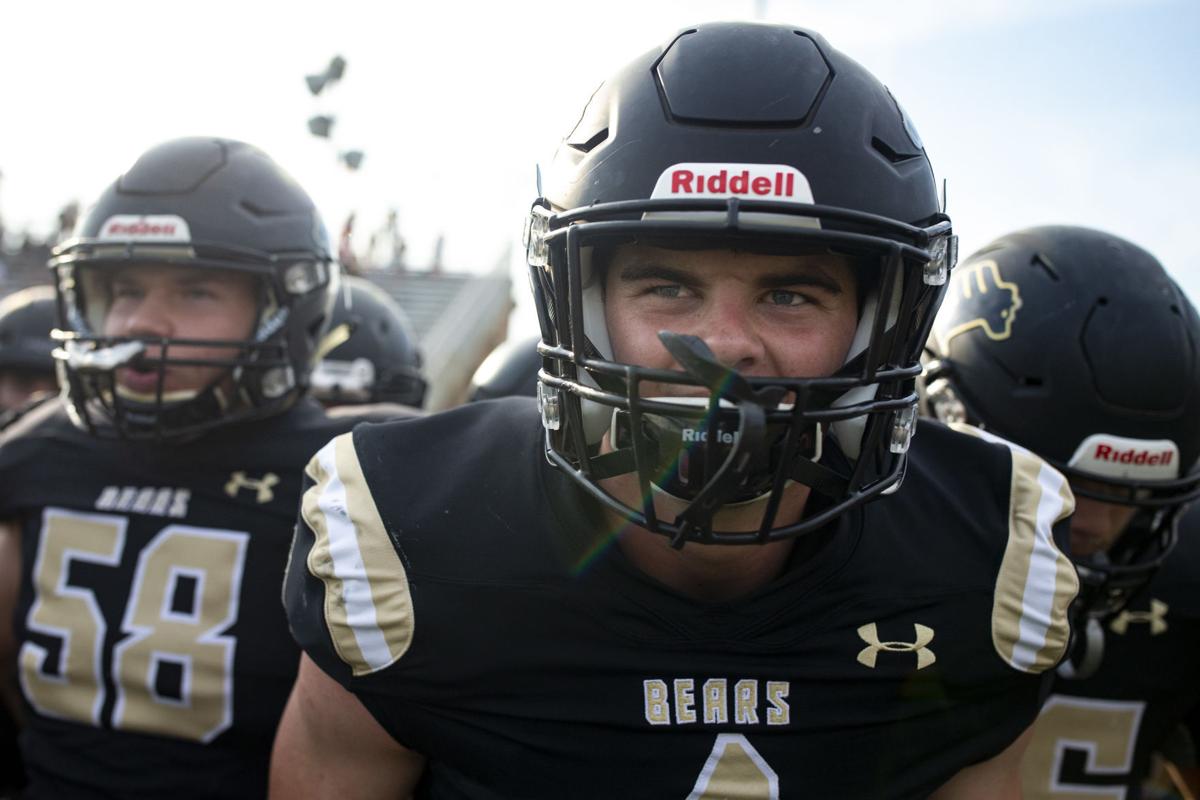 Billings West's Neil Daily leads his teammates onto the field before the Golden Bears' game against the Great Falls Bison at Wendy's Field at Daylis Stadium earlier this month. 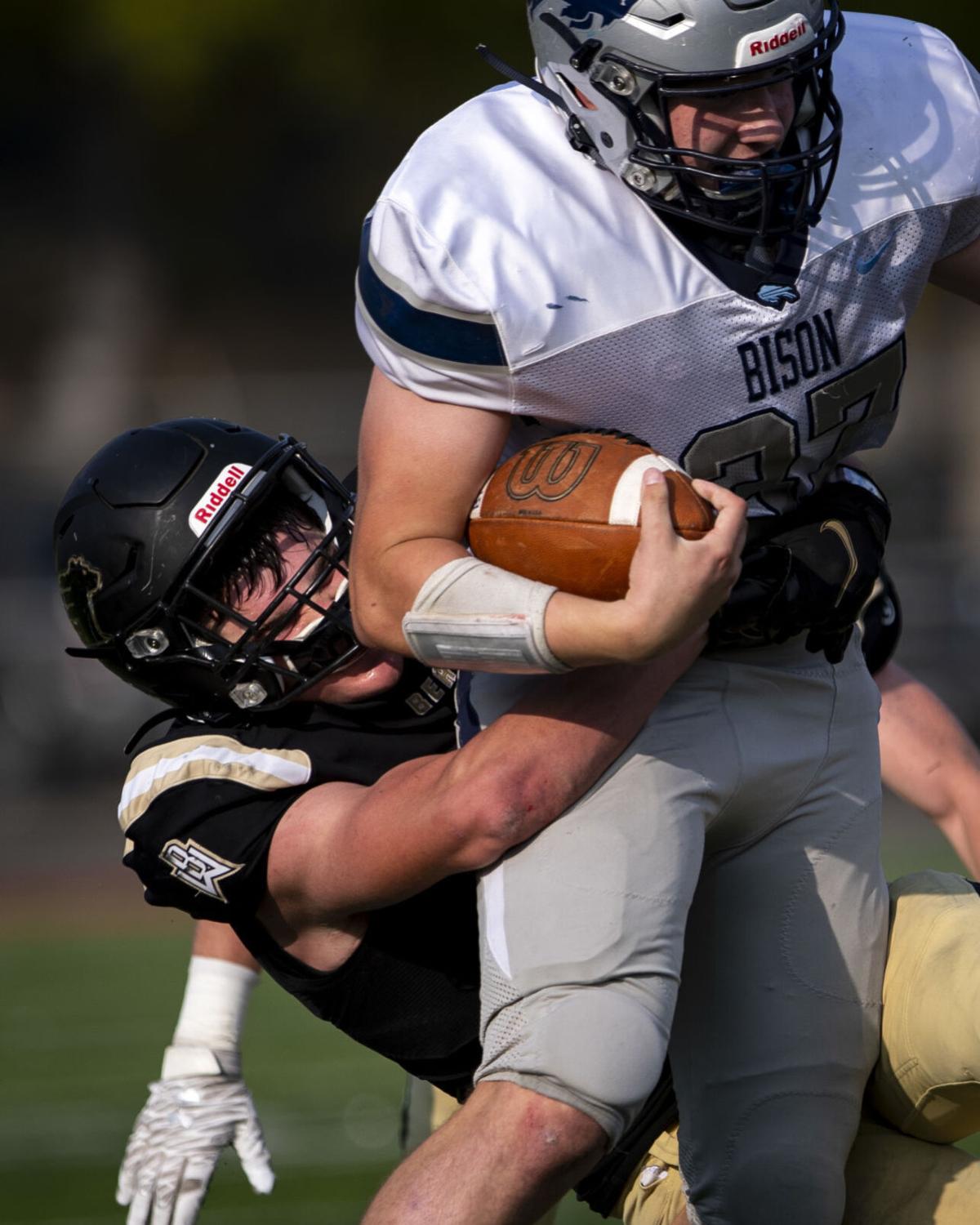 Billings West's Neil Daily leads his teammates onto the field before the Golden Bears' game against the Great Falls Bison at Wendy's Field at Daylis Stadium earlier this month.

BILLINGS — Connor Ryan pointed out the skinny, tall kid prior to running against him in a 200-meter race.

This was in 2019 at the Swede Dahlberg track and field meet in Butte. Ryan was a football and track stud at Billings West, and he could tell a good athlete when he saw one.

“I heard that kid is moving to Billings,” Ryan, who is now on the Montana State football roster, told Rob Stanton, the Golden Bears track and field and football coach.

Stanton was aware of the skinny, tall kid by his name on a time sheet, and, armed with this new knowledge, figured he might as well keep an eye on him. He might be someone competing for Stanton or against him one day, after all.

Later that spring, Stanton received a call from Missoula Sentinel football coach Dane Oliver. Oliver told Stanton about a “great kid” and a “hard worker,” a football and basketball player and trackster from Sentinel who would be enrolling at West.

Ryan was right. That skinny, tall kid — aka Neil Daily — was, indeed, moving to Billings. Daily's father worked in Billings and had been commuting back to Missoula on weekends for several years. The family had decided it was time to live in Billings permanently.

In his mind, Stanton began drumming his fingers together, and a couple weeks later took an even more keen interest the next time he and Daily crossed paths.

“They beat us and they won state that year. Then I met him afterward and I told Neil, ‘I’m not trying to stalk you here, but I watched you a lot’ ... Just the way he prepared for that meet. I told him to go celebrate with his teammates. He was just an all-around total package in that regard.”

Daily was a sophomore then, and he finished 6th at state in the 200 and 7th in the 100. Two years later, he’s emerged as the leader Stanton thought he was.

Prior to this football season, the West coaching staff bestowed upon Daily the No. 4 jersey, which goes to the player with the most spirit and intensity. It’s given in honor of former Bear Michael Guelff, who, though undersized at 5-foot-6, set a school record for catches in a season (73) and went on to a successful career at Montana Western. Guelff died in a single-car accident in 2009 as he was just about to begin a coaching career.

Normally, the No. 4 is reserved for players who have spent four years in the West program. But Daily was an obvious choice, Stanton said. And though he’s had just two years with the Bears, the number’s significance isn’t lost on Daily.

“It means a lot that in two years here I gained the respect to be one of the hardest-working kids on that team,” Daily said. “It truly means a lot. It kind of shows what I tried to do when I moved here. I didn’t want to be a starter right away, I wanted to work my way through the ranks.”

Daily is decidedly not undersized. Standing 6-3, Daily possesses that unique blend of size and quickness. A three-sport athlete at West, Daily runs the 100, 200, and a leg in the Bears’ 400-meter relay team. He’d like to add the 400 to his resume, as well. Last season, a starter on the Bears' basketball team, Daily averaged 10.3 points and 6.7 rebounds per game.

Looking to add some heft to their frame over the spring and summer, Daily and football teammate Paul Brott took to long sessions in the weight room, sandwiching in big breakfasts — usually five Egg McMuffins from McDonald’s for Daily — in between workouts.

Daily packed on 20 pounds between the canceled track and field season to the start of football season. It's not often you see 6-3, 215-pounders running the 100-meter dash.

“There’s not too many of us,” Daily deadpanned.

Daily began this football season playing a lot of pass coverage for the Bears’ defense, but is more of a middle/outside linebacker hybrid. He is tied for second on the team with four tackles for a loss, including a sack, and is also second with 13 solo tackles.

On offense, Daily lines up at tight end and sometimes as a receiver, and has caught 11 passes for 250 yards and three touchdowns. But it’s the lure of untapped defensive potential that enticed colleges to Daily, and earlier this year he committed to play for Montana State.

The Bears are ranked No. 2 in the latest 406mtsports.com poll. Daily’s former team, Sentinel, is ranked No. 1, and though Daily claimed he’s not looking past any opponent, he conceded it would be fun to see his former teammates again.

If both teams continue on their respective trajectories as the top teams in the Eastern AA and Western AA, that would only happen in a state championship game.

Until then — if it happens — Daily will concentrate on the remainder of his football season. Then, COVID-19 pandemic willing, comes basketball season and a final season of track and field. Daily has no plans to let up.

On the football field, you can hear him screaming after a big play. In basketball and on the track, you can see the scowl of determination on his face.

That fire, intensity and drive that Stanton saw from a skinny, tall kid at a track meet in Butte has not diminished.

Great Falls CMR (2-3) at Billings Senior (4-1, No. 5 in Class AA), 7 p.m., Wendy’s Field at Daylis Stadium: Senior rolled up some big numbers last week — nearly 500 yards in total offense — and eventually pulled away from Billings Skyview in a 31-6 win. The Rustlers defeated Bozeman Gallatin 42-21 last week, a win that ended a three-game losing streak. Two spectators per participant will be allowed, said Mark Wahl, director of activities and athletics for Billings Public Schools, with no student sections.

Billings Skyview (2-3) at Great Falls (1-3), 7 p.m.: Despite all the yardage given up to the Broncs last week, the Falcons played physical and hung in there until Senior scored 14 unanswered points in the second half. Great Falls is coming off its toughest stretch of the schedule: Consecutive games against No. 5 Senior, defending state champion (though unranked) Bozeman, and No. 2 Billings West. All were losses, though the Bison put up 27 points on Billings West last week, the most allowed by the Golden Bears so far.

Billings West (5-0, No. 2 Class AA) at Belgrade (0-3), 7 p.m.: Due to quarantining and contact tracing for COVID-19, Belgrade hasn’t played a game since Sept. 25 and just resumed practicing on Monday. What a first game back, facing a West team that has yet to score fewer than 41 points and averages 54 per game.

Lewistown (2-2) at Laurel (3-1, Class A No. 5), 7 p.m.: Before last week's blowout loss to Central, Lewistown looked like it might be an Eastern A contender. The Golden Eagles beat Bigfork, now No. 4 in Class B, 22-14 in overtime to open the season, and they followed that up with a 22-7 loss to Miles City and a 21-0 win over Havre. Laurel beat Havre 42-0 in its season opener and has allowed seven total points to opponents other than Central.

Colstrip (1-3) at Shepherd (3-2, No. 10 Class B), 7 p.m.: The Mustangs made the leap into the 406mtsports.com rankings this week and can remain unbeaten in the East with a win. With a regular-season finale coming up next week against Red Lodge, Shepherd, 3-0 in the league, can’t afford to overlook the Colts.

Custer-Hysham (2-3) at Bridger (4-1, No. 9 6-Man), 7 p.m.: A Rebels’ win would create a logjam in the South, leaving Custer-Hysham, Bridger and Broadview-Lavina all at 3-2 in league play. To win, though, Custer-Hysham will either have to limit or keep up with Bridger’s offense, which has scored 125 points in its last two games.

Victor Flores contributed to this story.

Neil Daily is the second class of 2021 West football player to commit to MSU.