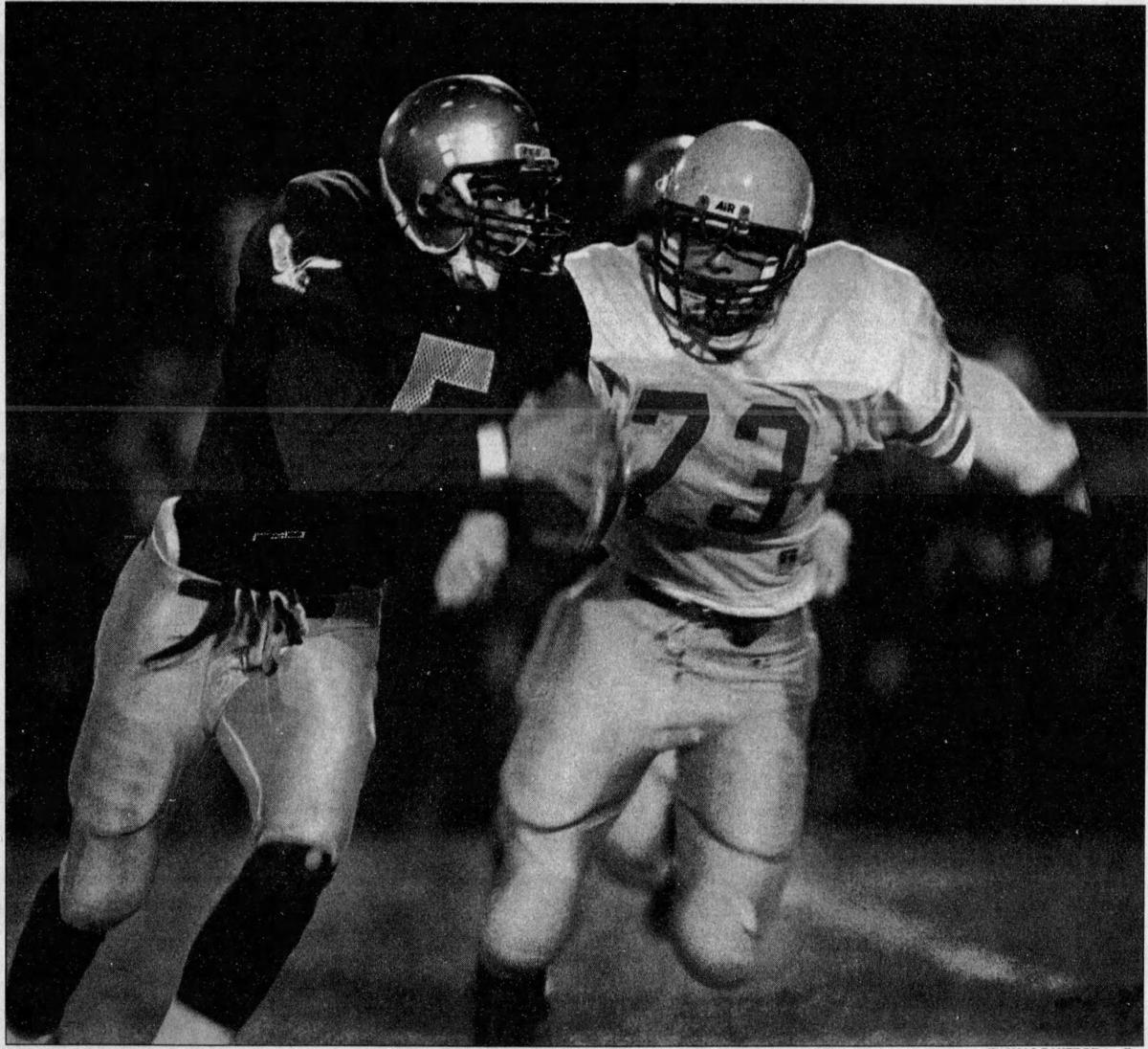 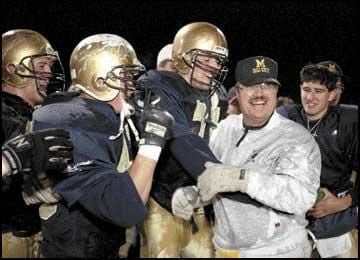 MISSOULA — All Jeff Dohn, John Batt and Jeremy Watkins could do was laugh.

The three could hardly believe that it has been 25 years since the 1994 Class AA state championship clash between Missoula Big Sky and Missoula Hellgate on a cold Nov. 18 evening at Missoula County Stadium.

But in fact, all were blown away by another wild fact: That crosstown title game was the last time a Missoula AA school has played for a state football championship.

"I know I had my 20th class reunion not long ago, but knowing it's 25 years ago is insane," Batt said with a laugh.

Both Big Sky (1-1) and Hellgate (1-0) will meet on Friday in their annual crosstown rivalry game. But knowing that this season marks the 25th anniversary of a pivotal night in Missoula sports history, adds a little flavor as the two prepare to clash.

Batt was the senior quarterback and strong safety for those Big Sky Eagles, who went on to win the game, 39-13. The Missoulian headline the next day read "Big Sky claims crown" with a sub-headline reading "Batt guides Eagles over Knights."

Watkins was a two-way star for the Eagles as a cornerback and receiver. He was named the player of the year in Class AA that season and the offensive MVP. Dohn was a first-year head football coach with the Knights in that game.

"There's a lot of things I remember," Batt recalled. "We held them to just a few yards of total offense in the first half on defense. Offensively, everything ran smooth. (Big Sky coach Gary Ekegren) was a hell of a motivator and just flat out told us if we worked together, we'd win it, and that's what we did.

"We had a great group of guys. I just remember putting my faith in everyone's hands and everyone did the same thing and we came out victorious."

Big Sky started out hot on an otherwise cold night in the Garden City. The Missoulian article explained that a crowd of about "4,000 braved temperatures in the 20s to pack MCHS Stadium for the first all-Missoula football title game."

"It was cold," Dohn said. "I remember that particularly. You'd go get a drink of water out of the cups and they were frozen."

Dohn said he remembers old coaches who used to coach at Hellgate wanting to talk about the game prior to the meeting. He said the field was beat up and that they brought in stands to accommodate all of the fans who would attend. Dohn began teaching and coaching at Hellgate in 1986, and has been at the school ever since. Dohn, 60, is currently the head track and field coach at Hellgate in his 34th year at the school. He was the head football coach for 15 years and is an assistant with the team now.

"It was a big weekend for football in Missoula," Dohn said.

Big Sky held Hellgate to just 24 total yards in the opening half as the Eagles grabbed a 20-0 lead quickly. Batt found fullback Andy Petritz for a 3-yard touchdown to open the game's scoring in the first quarter. Batt added a 3-yard run and 19-yard pass to Justin Daniel to make it 20-0 heading into intermission.

"We struggled against their defense all year," Dohn remembered. "It was hard for us to move the ball against that front.

"They were good. They had been in the playoffs three years in a row and they had a good run of kids who got them where they needed to go."

Hellgate responded to begin the third quarter with a 13-play, 70-yard drive that was capped off by a 1-yard run by quarterback Mark Dennehy to make it 20-7. Dennehy is the son of former Montana head coach Mick Dennehy, who was coaching with the Grizzlies at the time.

But on the next possession, Big Sky went down and scored again, this time a 22-yard run from Daniel, though the Eagles did almost cough up possession with a fumble earlier in the drive. But that was the way the game went for Hellgate, according to Dohn.

Watkins also made a leaping, one-handed catch on that drive on a crucial third-and-6 in traffic, another play Dohn and Watkins remember vividly.

"Those are the catches that kind of got me hooked on football," Watkins said. "That to me was the funnest part of football. Seeing a ball hanging up in the air and attacking it and going up and getting it before anyone else."

On Big Sky's next possession, Batt found Watkins for what turned into a 58-yard touchdown that effectively put the game away. Daniel added a 9-yard touchdown run for the game's final score while Hellgate's Byron Cooper scored on a 15-yard run before that for the Knights.

"What I do remember and what has kind of stayed with me from that time is how well that team worked and how we clicked and how everything just felt really smooth," Watkins said. "I think it's something I took for granted at that point in my life.

"Moving on from that game, going to college and playing football, and even in my professional life in the workforce, it's pretty rare to have a team like we had that just kind of clicked from the coaches to the players. Everyone had a role and knew what they were supposed to do and just kind of put their heads down and did it. I think collectively we all knew that if we did that, good things were going to happen."

Batt finished with 177 yards of total offense. Watkins caught four passes for 106 yards while Daniel ran for 109 yards. Batt and Doug Hartsell each had 10 tackles.

Hellgate returned its center and future Griz Paul Mocko for the game after he missed a number of games due to a hand injury. Mocko had nine tackles, including two for loss in the contest. The team's leading rusher, fullback Ryan Kelly, was knocked out of the game with an ankle injury as well for the Knights in the second half.

The win served as a breakthrough for Big Sky, which lost to Helena Capital in the 1993 state championship. For Hellgate, which lost in the 1991 state title game to Butte, it was a matter of proving that season wasn't a fluke.

The Eagles defeated Capital in the semifinal game in Helena as the No. 3 seed while Capital was the No. 2 seed. Only four teams of the 13-team Class AA field made the postseason back then.

Big Sky had its fair share of troubles with Capital, but that 1994 playoff game was a turning point.

"I remember telling my parents and everyone on the team that if we scored first, we'd win," Batt said of the Capital game. "Opening drive, we went down and scored and the game went back-and-forth and we ended up winning."

In that game against Capital, Watkins scored all five of Big Sky's touchdowns. He had a kickoff return for a score, an interception return and three touchdown catches from Batt to put Big Sky in the championship game.

Meanwhile, Hellgate, the No. 4 seed, went on the road as well and upset then-undefeated Billings West to punch its ticket into the finale.

Both teams were ground-and-pound offenses, but Batt said Big Sky changed its offense in the playoffs to a more pass-heavy team. And just a few weeks prior to the state championship game, Big Sky actually beat Hellgate in its annual crosstown game.

But Batt said they didn't go into the title game cocky because of the upset Hellgate pulled on West.

"You have (the win) in the back of your mind but you can't have that (cocky) mindset when you play because look what they did the week before to the No. 1 seed," Batt said.

The game also preceded the 94th Brawl of the Wild meeting between Montana and Montana State. The game was held in Missoula that season which meant back-to-back big football days in the community. The Griz would go on to win the game 55-20 over the Bobcats for their ninth straight win in what has been known as "The Streak," in which Montana won 16 straight meetings between the two schools from 1986-2001.

"I just remember there was a lot of people around," Dohn said of the atmosphere. "We were really focused on our chances to win against them."

"It was awesome," Batt added. "Going out and seeing all of the people cheering. And it didn't matter who came out on the field if it was Big Sky or Hellgate. The whole place cheered for both teams. It was unbelievable. You don't see that very often."

For Batt, the most vivid memory was after the game when a coach's brother played "We Are The Champions" by Queen loudly with a stereo in his truck. The moment, he said, was one he was able to soak in.

Now 25 years since that game, life has moved on. Batt played football for one year at UM after that game and spent two seasons throwing the javelin on the track team. Now 42, he works for Republic Services in Missoula. Ekegren, a Harlem native who coached for 20 years at Big Sky, passed away in 2011 after a long battle with pancreatic cancer.

Watkins had a standout career with the Griz and eventually moved to Portland. Now 43, he resides in Bozeman with his wife and three children.

"It was one of those things where it's been long enough where it's like, oh yeah, that happened," Watkins said. "That was a long time ago. It's crazy. Time just kind of flies."

Here's how Montana Grizzlies plan to reopen facilities to student-athletes