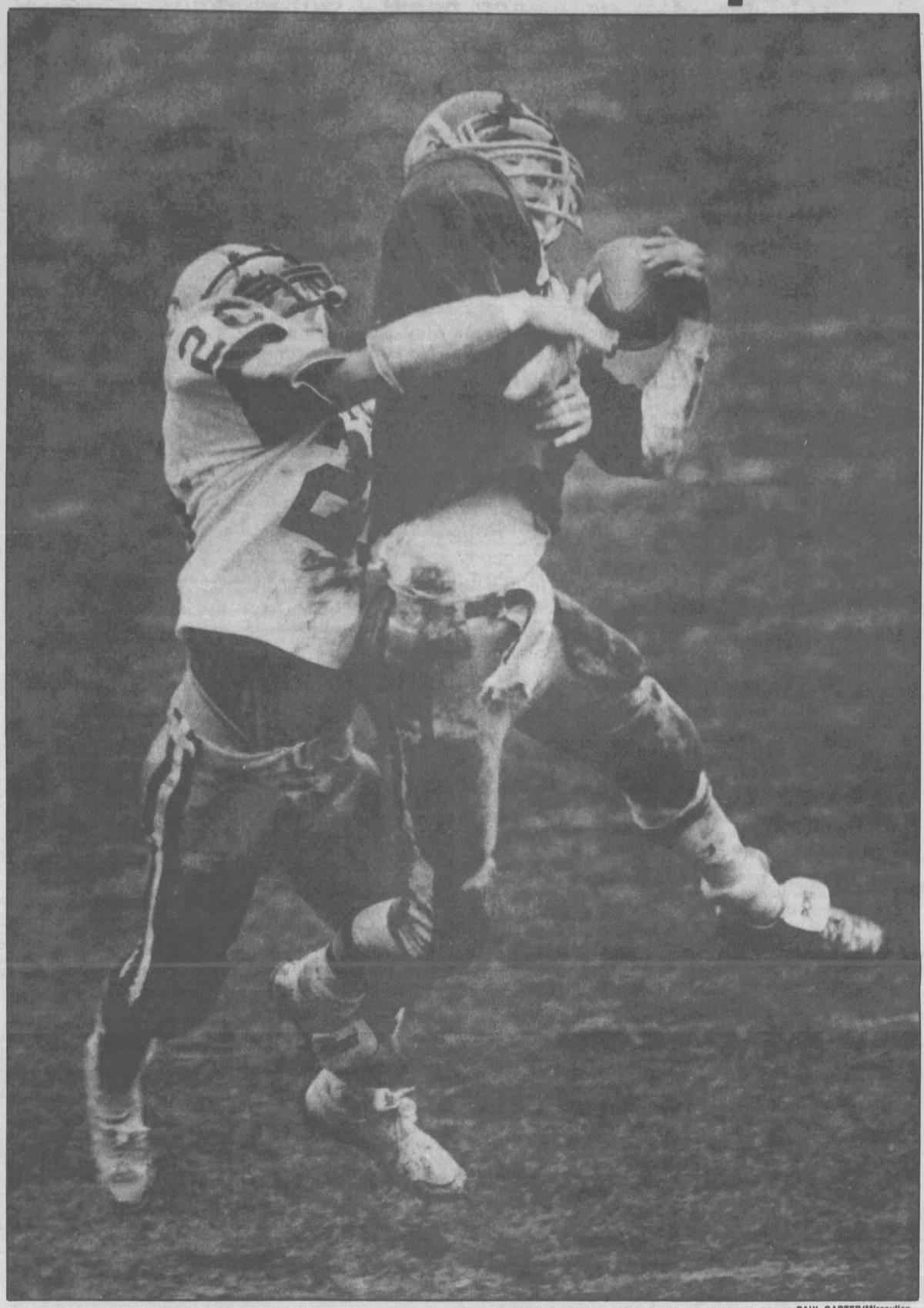 Sentinel tight end John Shields hangs on to pass during an ill-fated fourth-quarter drive in the 1984 State AA championship between Missoula Sentinel and Great Falls CMR. The Rustlers ended up winning, 7-6. 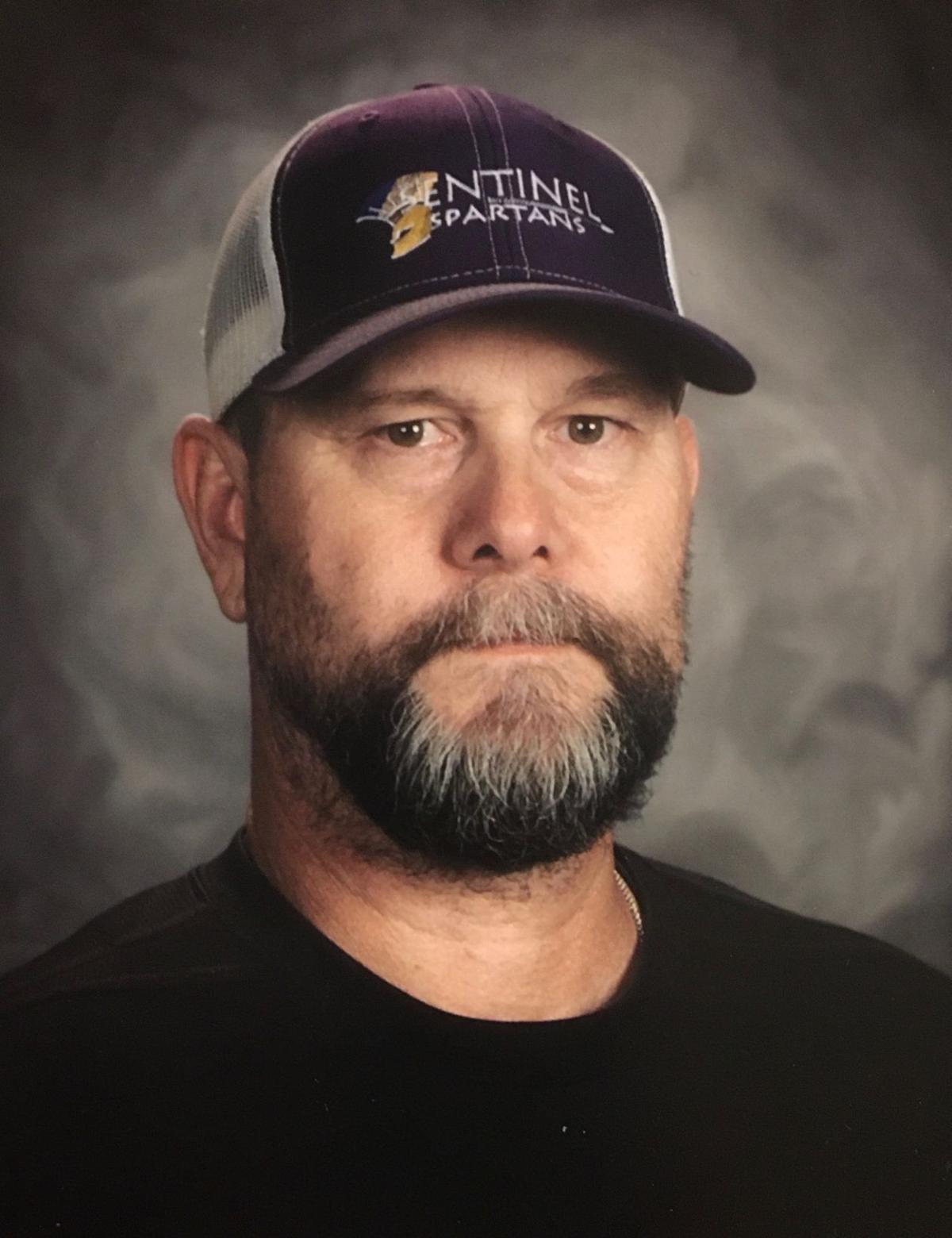 Sentinel tight end John Shields hangs on to pass during an ill-fated fourth-quarter drive in the 1984 State AA championship between Missoula Sentinel and Great Falls CMR. The Rustlers ended up winning, 7-6.

Since the early 1970s, when he quarterbacked the Spartans to the 1972 Class AA state title, Kerr has been a stalwart around the school, which had its first football season in 1964 after Missoula County was split into Sentinel and Hellgate. After playing for the University of Montana, he began coaching in 1981 and eventually was the head coach of the Spartans for eight seasons.

He got out of football for a while after that, but spent time with the Sentinel basketball program to help continue one of his greatest loves: coaching. After a period of elementary teaching, a job at the high school opened up in the 1990s, and he has been there ever since.

But coaching football was always in his blood, and when current head coach Dane Oliver took over in 2012, he jumped back in. Kerr's final season, which he spent with the freshmen, coincided with the freshman year of this year's crop of Sentinel seniors, who have pushed the Spartans to the school's first state football title appearance in 36 years.

Sentinel football coaches and players alike still refer to him as Coach Kerr.

"We call him a Spartan legend," Oliver said. "He's got a lot of wisdom, and he's a great football mind."

On November 18, 1972, nearly 48 years to the date, Missoula Sentinel won its one and only outright football title.

Kerr had a pretty good year for the Spartans that season, helped by legendary wideout Bryan Flaig, who caught three touchdowns in the championship to help push the Spartans to a 29-16 win over Great Falls High.

Flaig scored 23 of those 29 points himself, even picking up a botched extra point attempt to score a two-point conversion. Defensively, the Spartans were pretty impressive too, giving up less than 50 yards rushing and forcing the Bison into numerous mistakes.

Gene Leonard, the grandfather of Sentinel star Geno Leonard, was the head coach for Sentinel at the time.

"Our defense was so fired up for that game," Kerr said. "They caused so many turnovers."

Following a Sentinel win over Missoula Hellgate in the 1972 regular season finale, the Spartans thought their season was over. It was an afternoon game, and several players decided to drive over to Butte to watch Great Falls take on the Bulldogs.

Butte was not having a particularly great year, and the Bison were supposed to win in dominating fashion. They did not.

Naranche Stadium was a mostly dirt and mud field at the time, and the hard-hitting players from the Mining City knocked out Bison quarterback Mike Roban, who missed the rest of the game and then the state championship with a knee injury.

Briggeman remembers being impressed by Len Kelly, a speedy player who netted 1972 Class AA all-state honors on both offense and defense and helped push Butte to an upset win. Kelly would later be a starting wide receiver on Montana State's 1976 NCAA Division II national title team.

Great Falls got its revenge a year later, hammering the Spartans, 37-0, in the 1973 state title game on a cold, miserable day. Kerr was a senior on that team, and Briggeman laughingly remembered being pulled as a starter late in that game because he was not having a real good day along the offensive line.

It would be 11 more years before the Spartans would get another crack at a state title game.

An exchange student from Mexico, Allegre was called into a game to try and attempt a 34-yard game winning field goal. It was a wet day, and CMR had already missed 21- and 18-yard field goals in the game, both of which fell short.

Sentinel had driven all the way from the CMR 19-yard line to the Sentinel 17 but was out of timeouts and time.

Allegre was not able to plant his foot correctly on his kick, and the ball was well short and to the right. CMR won 7-6, and Sentinel was crushed, as was Kerr, who was an assistant to head coach Tim Dennison at the time. Dennison's son, Troy Dennison, is currently an assistant for Sentinel.

Interestingly enough, Allegre's brother, Raul, played for the UM football team for a time and was an immensely successful kicker in the NFL, spending 10 years in the league and winning the 1987 Super Bowl with the New York Giants.

On that day, however, it would have been difficult for even Raul to make that kick.

"It was wet and the field conditions were not great," Kerr said. "I just remember our kicker slipped."

The only Rustlers score in that game was a first quarter 5-yard run from CMR fullback John Harris, who was filling in for standout halfback Tony Hinz. On the first play of the second quarter Hinz, who rushed 13 times for 66 yards in the first quarter, was injured and did not return to the game.

Hinz, an eventual 11th-round pick by the New England Patriots in the 1989 draft, came into the game having toted the ball 198 times for 1,343 yards and 20 touchdowns.

Joe Easton hauled in a five-yard pass from quarterback Clay Clausen for the score, but the PAT kick from Dave Means missed to the side.

Sentinel did have other chances, including one in the first quarter when it appeared it had scored a 58-yard touchdown from Clausen to Chuck Lawson. An official, however, ruled that Lawson had stepped out of bounds at the CMR 30-yard line.

"We couldn't convert, we did have a chance though," Kerr said. "At the end, we got the ball. We're driving down the field. Like I said, we're just trying to keep the ball in the middle of the field for our kicker and run the clock. We thought he had a good chance at it, but unfortunately, it didn't go our way."

Kerr is one of many long-time Missoulians who is enjoying the upswing of prep football in the town.

Sentinel is 9-0 this year and will play in the state championship against Billings West on Friday evening at 7 p.m. It has been a long time coming for a school and community that truly loves its football.

Oliver is a big reason for much of Sentinel's success but is always quick to credit just about everyone else for the impressive run over the past few seasons. It took a long time for Sentinel football to come back, which Kerr feels is part of a natural cycle, as he brought up past successful runs by Missoula Big Sky and Hellgate.

Briggeman was quick to credit Oliver for getting the best athletes in the school to come out and play football, which has not always been the case. He also pointed out that Flaig was a bit of an exception to that and was also an impressive basketball player. Sentinel won back-to-back state basketball titles in 1972 and 1973.

Several of Sentinel's stars from this year's team have been mainstays on the Spartan basketball team for years.

Missoula's three Class AA schools also have enrollment that is usually a bit less than many of the other schools in its classification.

In any case, a dream year for the Spartans has the city buzzing about the team and bringing up plenty of history while this year's team is creating its own legacy.

"It all comes down to what kids you have in your system, in your building," Kerr said. "I just really believe it cycles. Every few years, it goes to the other school, and they're good for a while, then their coaches move on or something happens and another school becomes better.

"When Dane came aboard, we were kinda down for a while, but he gradually built it back up, and now it's kind of our time, Sentinel's time, to be the premier high school football team in the city."

When Missoula Sentinel and Billings West clash in the State AA football title game Friday, there will be some Cat-Griz flavor as the Spartans have three Montana commits and the Golden Bears have a pair of Montana State commits.