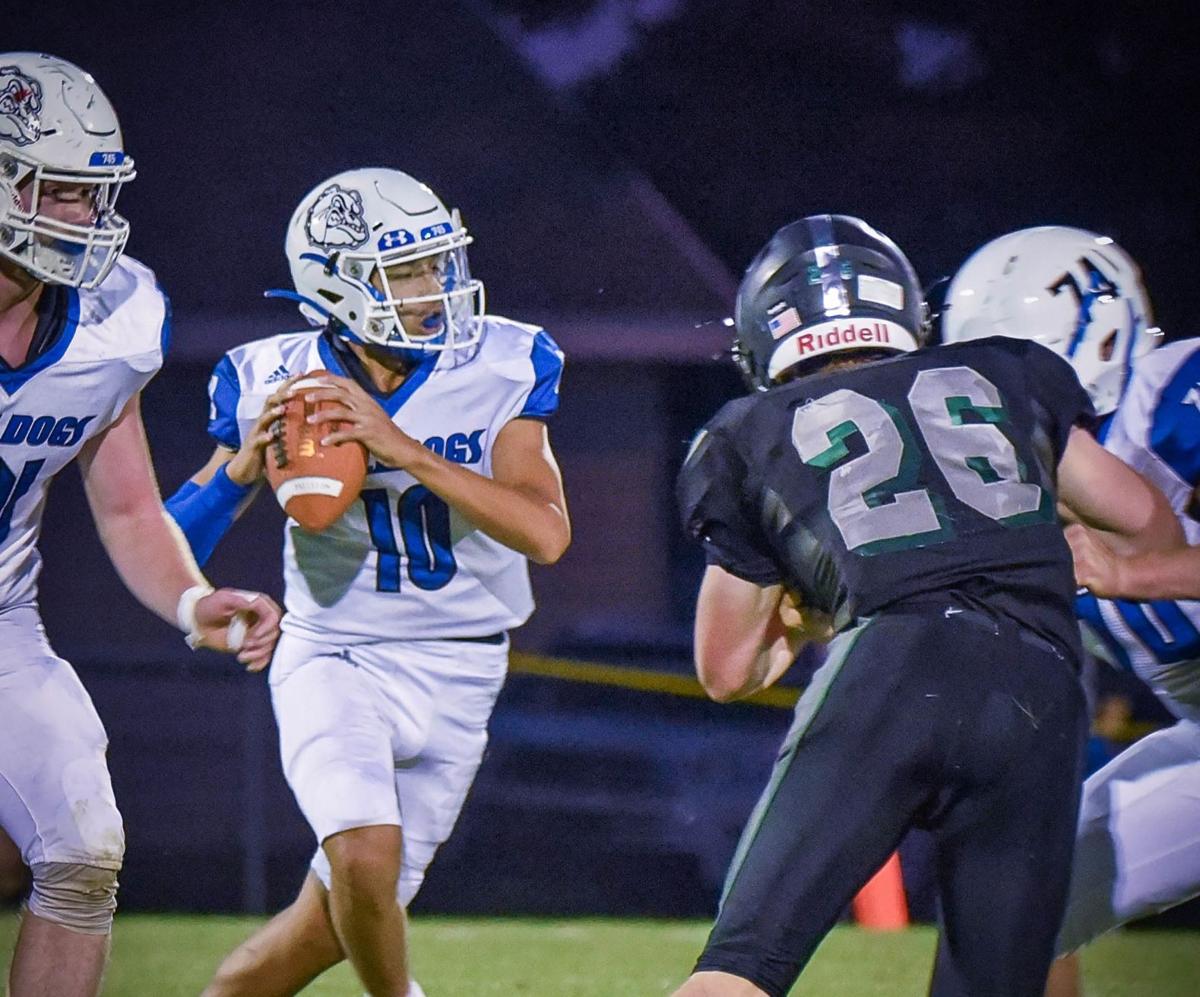 Mission quarterback Kellen McClure attempts a pass during a game earlier this season against Drummond-Philipsburg. 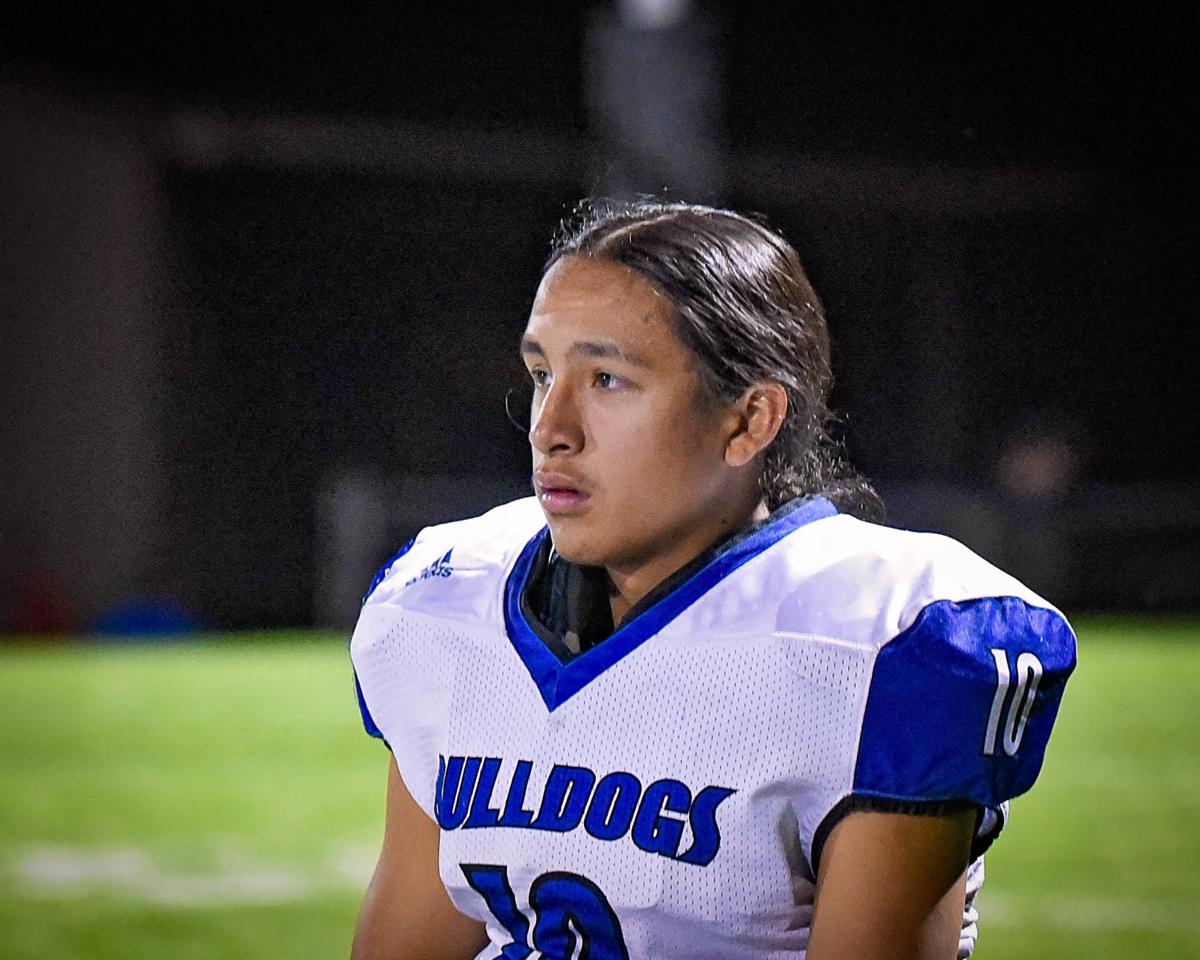 Kellen McClure throws much of the credit for his personal success to his team, but with 20 touchdowns against just six interceptions and a QB rating of 115.9, the sophomore is truly a star for the Bulldogs.

Mission quarterback Kellen McClure attempts a pass during a game earlier this season against Drummond-Philipsburg.

Kellen McClure throws much of the credit for his personal success to his team, but with 20 touchdowns against just six interceptions and a QB rating of 115.9, the sophomore is truly a star for the Bulldogs.

MISSOULA — If ever a team was truly better than its record shows, it sure might be the St. Ignatius football team.

The Bulldogs are 2-3 and head into a showdown against Arlee this weekend after winning their last two games. Mission dropped its first three, but there is a caveat there — they came against 406mtsport.com third-ranked Thompson Falls, No. 2 Drummond-Philipsburg (Flint Creek) and Alberton-Superior (Clark Fork), which has been ranked most of the season.

All three of those teams were in the playoffs a year ago, all three made it out of the first round and Clark Fork went to the state title game. The losses against Thompson Falls and Clark Fork were by a combined 12 points, leaving the Bulldogs hopeful but with a bit of a bad taste.

“We’ve come together, we’ve had some comebacks and some things we’ve needed to overcome,” Bulldogs sophomore quarterback Kellen McClure said. “We’re still not at where we could be, but we’re getting there for sure.”

St. Ignatius remains the only team to score on Thompson Falls this year and nearly beat the Blue Hawks, rallying for 24 points in the second half and eventually falling 38-32.

Thompson Falls has outscored its opponents 202-0 in four other games.

McClure had 264 yards passing and three touchdown passes in the loss to the Blue Hawks, and his star began to rise. He’s quick to credit everyone else on the team beside himself for his personal success, but humble is a pretty good way to describe both McClure and his team.

“Our offensive line is really good and they’ve been giving me a lot of time back there to get some throws off … a lot of credit goes to them,” McClure said. “Our receivers too, they catch some of the craziest balls. Sometimes I don’t throw, sometimes they just aren’t the best balls, but they catch them somehow.

“Our backfield is really good too, really fast. We’re a very fast team.”

Contributions have came from everywhere. McClure has completed 102 of 157 passes this year for 1,356 yards and 20 touchdowns against six interceptions.

Seven touchdown passes came in one game, a 72-34 drubbing of Seeley-Swan. Another five came in an incredible contest against Clark Fork in which the Mountain Cats prevailed 74-68 in one of the best high school football games this season.

McClure is pretty good at spreading the ball around. Eight different players have caught passes for the Bulldogs, led by John Komotios, who has 31 receptions for 402 yards and six touchdown catches. Not far behind Komotios is Canyon Sargent’s 23 receptions for 334 yards and eight touchdowns. Bryce Umphrey and Zoran LaFrombois, both sophomores, have been major contributors catching the ball as well.

Four different players have rushed 15 or more times, with Javon Bolen, Layne Spidel and Charley Adams each recording over 150 yards.

“We start four sophomores, whether that’s offense or defense and we’ve got freshman that contribute,” Bulldogs head coach Tyler Murray said. “We’ve got a decent amount of seniors and a lot of those guys contribute too, but we’re young overall.”

And so is that Mission quarterback, who has been dreaming for this type of opportunity for a long time. He saw his brother, Wacey, star as an all-state wideout for Mission and wanted to follow in his footsteps.

McClure got that chance last year and became a big part of St. Ignatius football as a freshman. The Bulldogs went 8-2 and grabbed the third seed out of the west, eventually falling to Park City in a tight playoff opener.

During the offseason, McClure worked hard to improve his footwork, and it’s paid off. With naturally good mechanics, he has the chance to improve even further.

Getting back to the 8-Man playoffs will be tough, and there is a good chance that St. Ignatius will not only need to win out but get some help to do so. But if there is any team that has the mental fortitude to do so, it just might be the Bulldogs.

They’ve already proven they can shake off a tough start, and getting to the postseason is just one more hurdle to clear. With their community behind them, they just might be able to pull it off.

“The people around me, all the fans and supporters of Mission have always been there for me, they know my potential and they know me better than I know myself,” McClure said when asked what motivates him. “Everyone pushes me to be better and the support for all of us from a small community and we’re just trying to make a big statement.”

"We haven’t had all the tests": Missoula Sentinel girls soccer happy with first half of season, but know more is to come

Fresh off a 3-0 win over Big Sky, the Sentinel girls soccer team is happy with how the first half of season has gone, but know more tests are to come