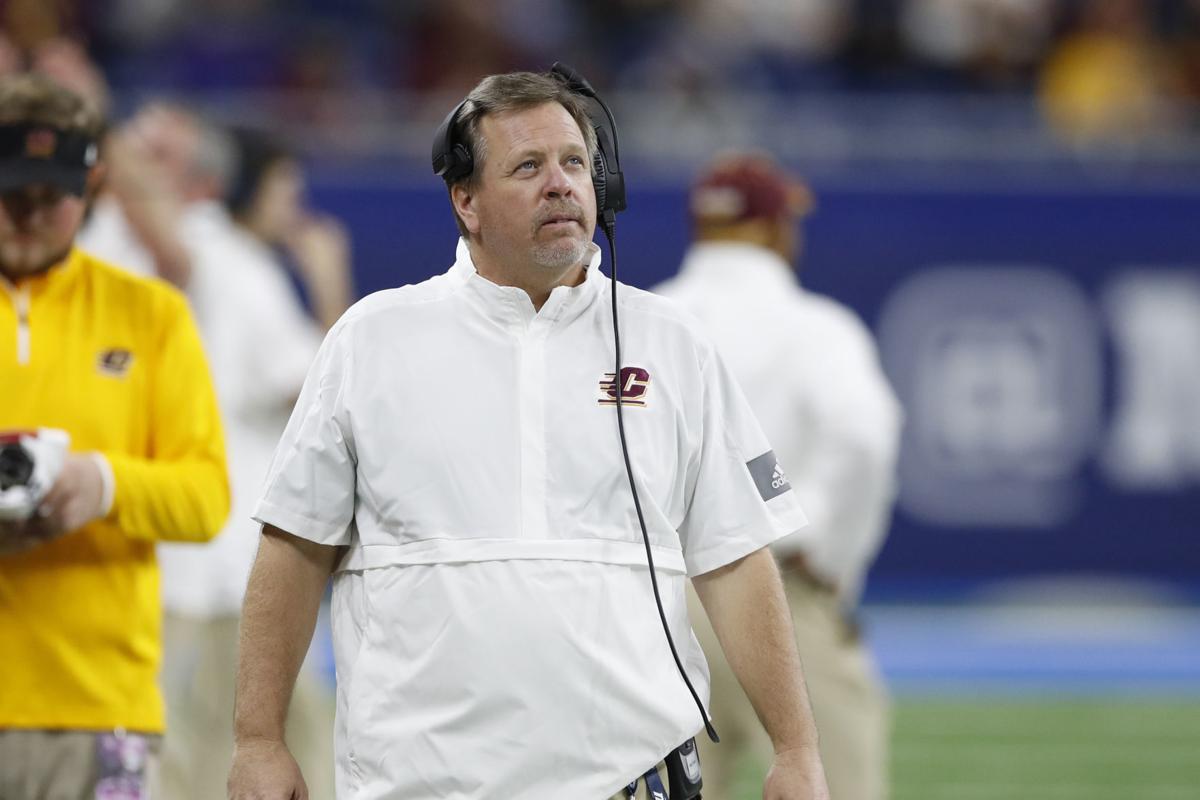 Central Michigan head football coach Jim McElwain walks the sidelines during the second half of the Mid-American Conference championship game against Miami (Ohio) this past December in Detroit. The Missoula native still carries lessons with him that he learned at Sentinel High School and in the Big Sky Conference, where he played and coached at Eastern Washington and later coached at Montana State. 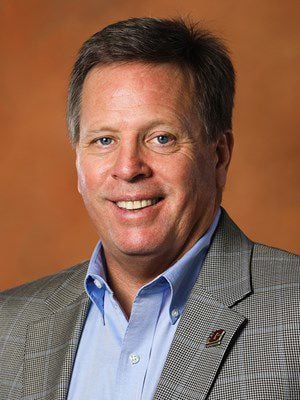 Central Michigan head football coach Jim McElwain walks the sidelines during the second half of the Mid-American Conference championship game against Miami (Ohio) this past December in Detroit. The Missoula native still carries lessons with him that he learned at Sentinel High School and in the Big Sky Conference, where he played and coached at Eastern Washington and later coached at Montana State.

That’s why the Missoula native who’s coached football in the NFL and Southeastern Conference wasn’t too upset when he got stranded, so to speak, at his lake cabin in Polson when the coronavirus hit in mid-March while his Central Michigan football team was on spring break.

With NCAA spring sports canceled, McElwain rode out the next three months in Montana, waking up every day to views of Flathead Lake. He’d take his boat out on the water, walk the beach and chop some wood after his online workdays ended around 3:30 p.m.

“I could argue those have been the best three months of my life, other than growing up, up here. It’s pretty cool,” said McElwain, who returned to Montana for his usual two-week summer vacation this past weekend, just in time for the rain to delay his initial boat excursion.

McElwain’s passion for his home state was apparent in the fond memories he rattled off with ease and detail during a 45-minute chat filled with laughs earlier this week. The 58-year-old spent the first 37 years of his life in Montana and the Big Sky Conference, laying down a foundation as an offensive-minded coach that set him up for three head coaching stints at Colorado State, Florida and Central Michigan.

Now, the Eastern Washington grad is living in a literal barn, adapted into a home, in Michigan. It has a practical purpose of being a large gathering area for him and his wife Karen to have recruits, boosters, players, and coaches and their wives over for a variety of functions.

The barn has a tinge of a Montana feel to it. But McElwain hasn’t been one to take on usual Montana activities like hunting or fishing. He prefers to be on the water, where his deck near Flathead Lake flies an Eastern Washington flag that draws the ire of the occasional passerby.

“Shoot, I’ve never shot a gun. The only shooting I did was in the gym,” he said with a laugh.

McElwain grew up as the youngest kid in a family where his father was a high school athletic director who gave him a key to the gym and his mother worked in the UM ticket office. It was an experience he's become more grateful for when recruiting in parts of the country where the quality of life isn't the same.

Immersed in sports, McElwain played Pee Wee baseball at Bonner Park, Little League baseball at Mount Sentinel, Little Grizzly football and YMCA basketball. Then it was off to Sentinel, where he was the football team’s 5-foot-11, 175-pound quarterback and a guard for the basketball team. He played football for coach Gene Leonard and basketball for coach Bob Luoma, learning a hard-nosed approach and “coaching secrets” he preferred not to share because he still uses them.

“It wasn’t about getting a participation ribbon,” McElwain said. “It taught you to get knocked down and get back up.”

He enjoyed playing multiple sports but wasn’t good at track and didn’t do Legion baseball because the summer-long sport would’ve limited the time he could get on a boat or jet skis on the lake. Football was his sport of choice and although he humbly said he wasn’t that great, he earned all-state honors and the chance to play in college.

McElwain grew up as a Griz fan, his entire family went to UM, but he didn’t get the chance to play there. He instead followed Sentinel alum and former UM assistant Pokey Allen to Eastern Washington in 1980. The Griz went with a quarterback named Marty Mornhinweg, who led them to their first Big Sky title in 12 years, set program records and won a Super Bowl as an assistant coach.

“I think they made the right choice,” McElwain said with a laugh. “Marty was a heck of a player.”

Yet it was that denial of getting to play for the team he grew up rooting for at Dornblaser Field and in Dahlberg Arena that led him on this path. He played for Dick Zornes at EWU, learning values of hard work, especially off the field by volunteering with teammates at concession stands during volleyball games, sweeping the courts or even painting lines on the football field.

McElwain returned to Missoula for the final game at Dornblaser Field in 1986 as a grad assistant at EWU. The Eagles lost in a controversial finish when receiver Tracy Poffenroth was ruled to have not controlled the ball inbounds near the back of the end zone as time expired.

“The worst call known to mankind,” McElwain said, still bitter. “One thing coach Leonard always told us whenever we went on the road as Spartans, he said no matter where you go, you’re down 14, so you got to make it up. That always stuck with me as well, so I’ve carried that with me wherever I’ve been.”

McElwain got his first shot outside his alma mater when Montana State head coach Cliff Hysell brought him to Bozeman as an assistant from 1995-99. He left MSU to follow coach John L. Smith, a one-time Montana assistant, to Louisville in 2000. It was that connection that also led him to coaching at Michigan State in 2003.

From there, it was off to the Oakland Raiders, Fresno State and Alabama for assistant coaching roles. He won a national title at Alabama in the Rose Bowl, where he dreamed of playing as a kid. It was an experience that was a long way from attending Griz games where he felt 2,000 people was a big crowd.

With his shot to lead a team, McElwain turned around a downtrodden program at Colorado State and was named the 2014 Mountain West coach of the year. Hysell’s letter to him when he became the CSU head coach in 2012, two years before Hysell died, struck a chord.

“He said whatever you do, you can’t be me, you can’t John L. (Smith), you can’t be coach (Nick) Saban,” McElwain said. “You got to be yourself and take the things that fit you from all the different programs and make it your own.”

McElwain's success at CSU earned him a shot at Florida, where he won two SEC East titles and was the 2015 SEC coach of the year despite his offenses struggling and finishing ranked in the 100s in the nation all three seasons. McElwain and Florida parted ways following a messy split in the middle of the 2017 season.

Looking back, he doesn’t have any regrets about getting into coaching or the stops he made along the way.

“John L. (Smith) used to say rip off the rearview mirror and let’s go forward,” McElwain said. “I think that that’s something we’ve always done. Look, I grew up in Missoula, Montana. The things I’ve seen and done, I never would have guessed it in a million years. I’m the luckiest guy in the world."

He added: “If you can’t laugh wherever you’re at, something’s wrong. That’s another thing I learned in Montana: You roll with the punches and you laugh and have a good time doing it.”

McElwain had gotten an education degree from EWU and thought he’d put that to use as a coach. It was his coaches along the way who started shaping him, and he wanted to do the same to give back.

“Looking back on the people that really impacted my life so much, which were all those coaches, I think it was just something I wanted to do,” McElwain said, joking that a macroeconomics class led him away from majoring in business. “I just couldn’t imagine a week without being involved in kids’ lives and trying to help them be successful.”

He rode out 2018 at Michigan in anonymity as a wide receivers coach and wasn’t looking to get back into head coaching until he heard from CMU athletic director Michael Alford, who McElwain met at Alabama. Working with kids is what’s kept him going.

“It’s the phone call, the letter, the email, the text now that you get from a former player 5, 10 15, 20, 30 years ago that says thanks and that some of things we did helped them be good fathers and good people in the community,” McElwain said. “It’s those things that really impact you probably the most and whenever you’re able to see them and see that smile on their faces and know that maybe you made a little bit of a difference.”

As for what the future holds, McElwain is focused on winning a MAC championship at Central Michigan instead of looking toward his next stop. He made a major leap in his first year at CMU in 2019 when he engineered the biggest turnaround record-wise in the FBS and led the Chippewas to the MAC West title and their first berth in the MAC title game since 2009.

“The important thing is you just put everything you have into wherever you’re planted at the time,” McElwain said. “My dad taught me that you just work your tail off and if somebody takes notice, they notice. If not, that’s fine. At least you can go to bed at night knowing you did everything you could to help someone be successful.”

He’d like to attend a Brawl of the Wild game once he retires, although he joked he might not be allowed in Washington-Grizzly Stadium because he played for EWU and coached at MSU. It’s a rivalry that he says “there’s not one that I think is better than the Cat-Griz game,” and that’s after a career coaching in some of the great rivalries: the Iron Bowl between Alabama and Auburn, the World’s Largest Outdoor Cocktail Party between Florida and Georgia, and the Rocky Mountain Showdown between Colorado and Colorado State.

“I’ve had an amazing, amazing run,” McElwain said. “If it ended right now, I can just tell you, I’ll come back to Montana and do anything I can to help this state and help the community and do whatever it is because it gave us so much.”

That could possibly include doing some coaching in Montana.

“As long as I can commute from Flathead Lake,” McElwain said with a laugh. “Maybe Polson High needs some help and maybe they might have an old, broken-down, retired coach to help them.”

MISSOULA — Montana and Eastern Washington will resume their heated rivalry this weekend after not playing each other in 2018, the first time s…