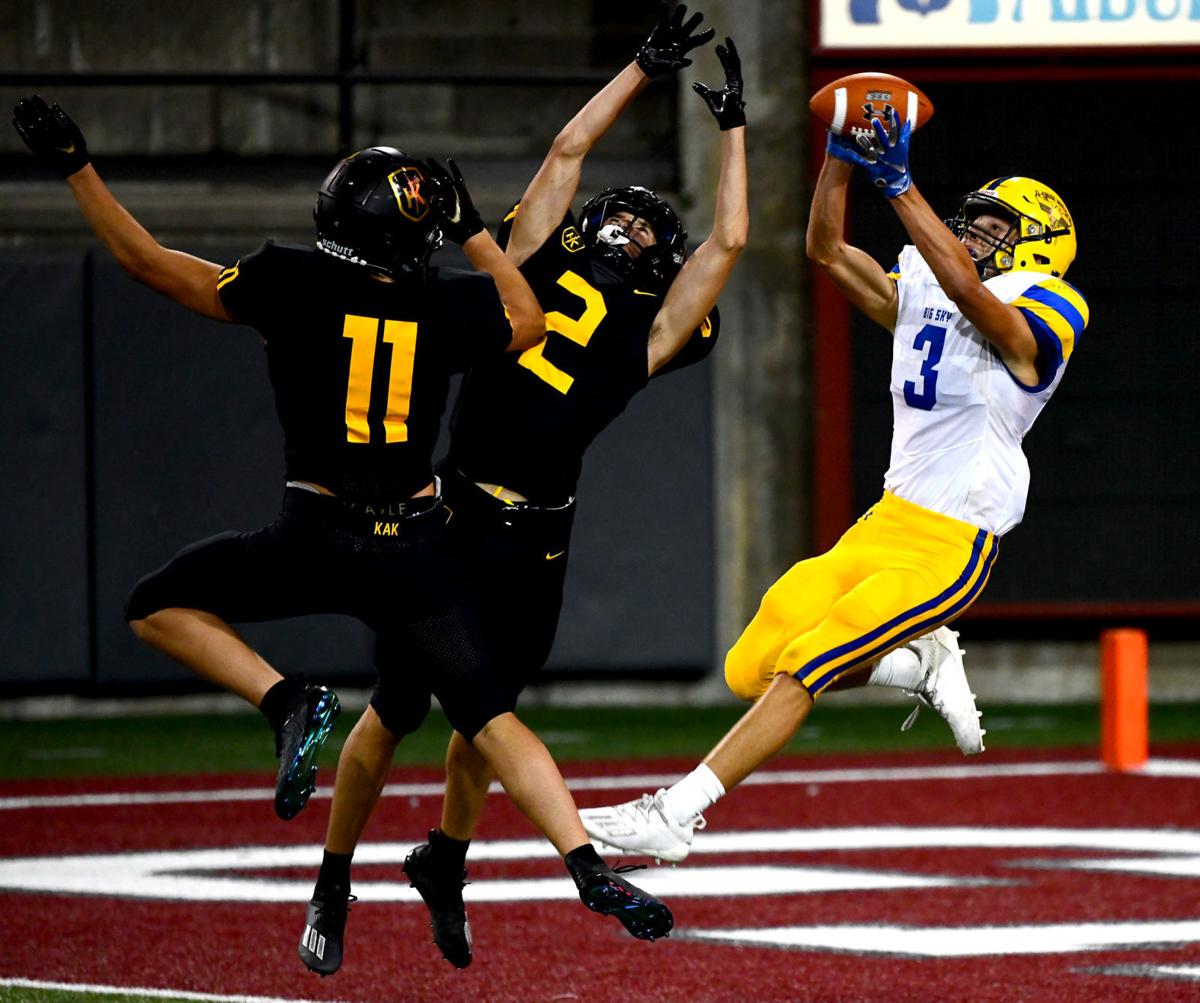 Missoula Big Sky's Tre Reed (3) catches a pass in over Hellgate's Ian Finch (11) and Asher Topp (2) during their game at Washington-Grizzly Stadium on Friday night. The Eagles defeated the Knights, 48-20. 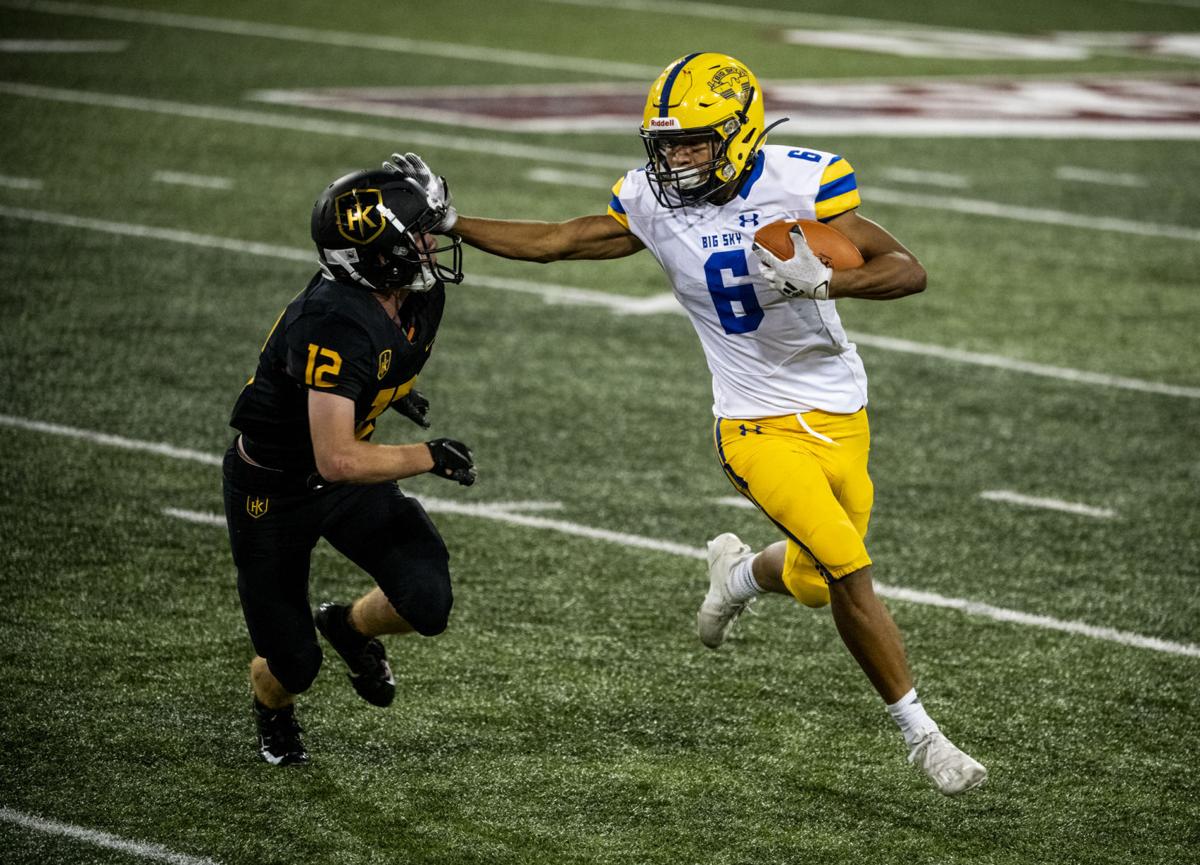 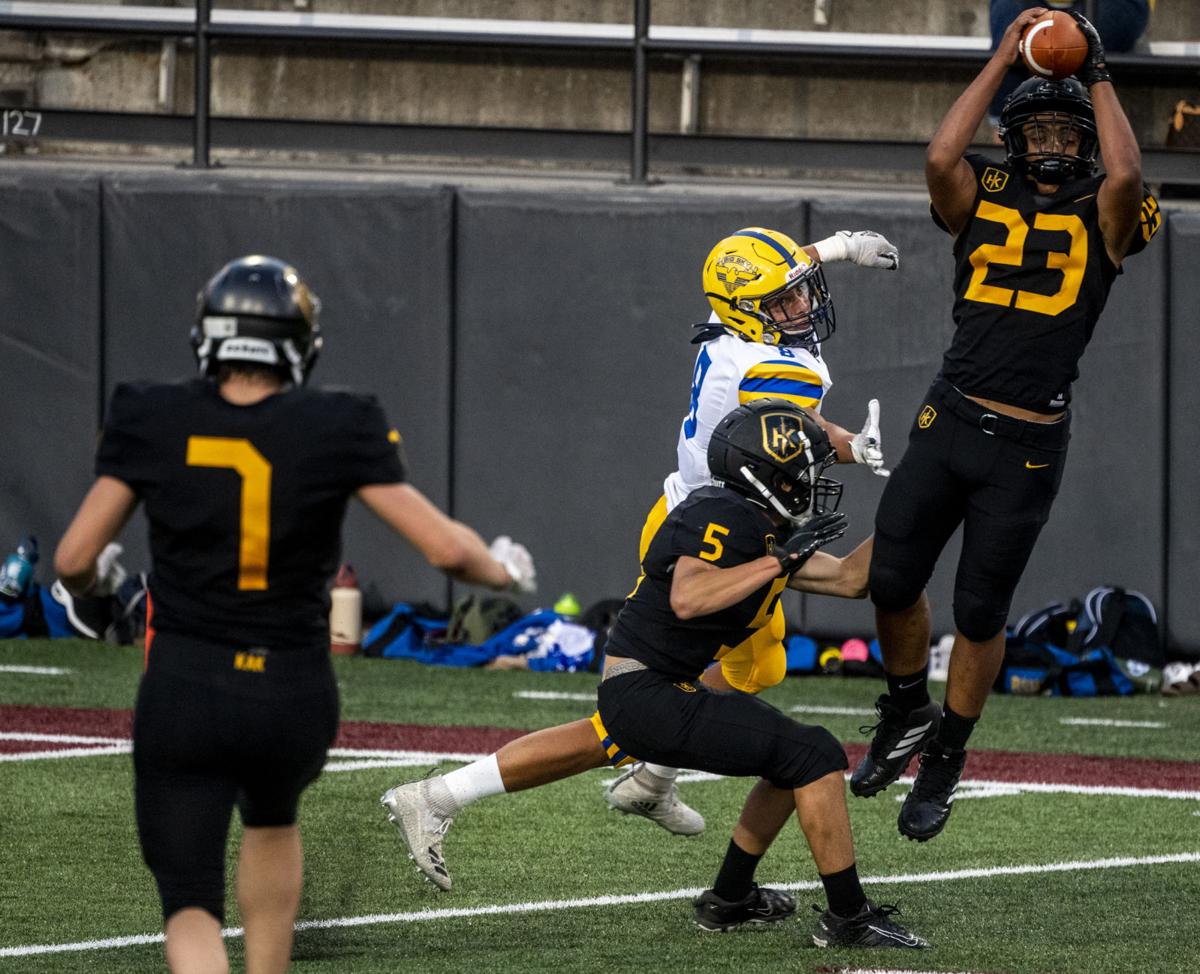 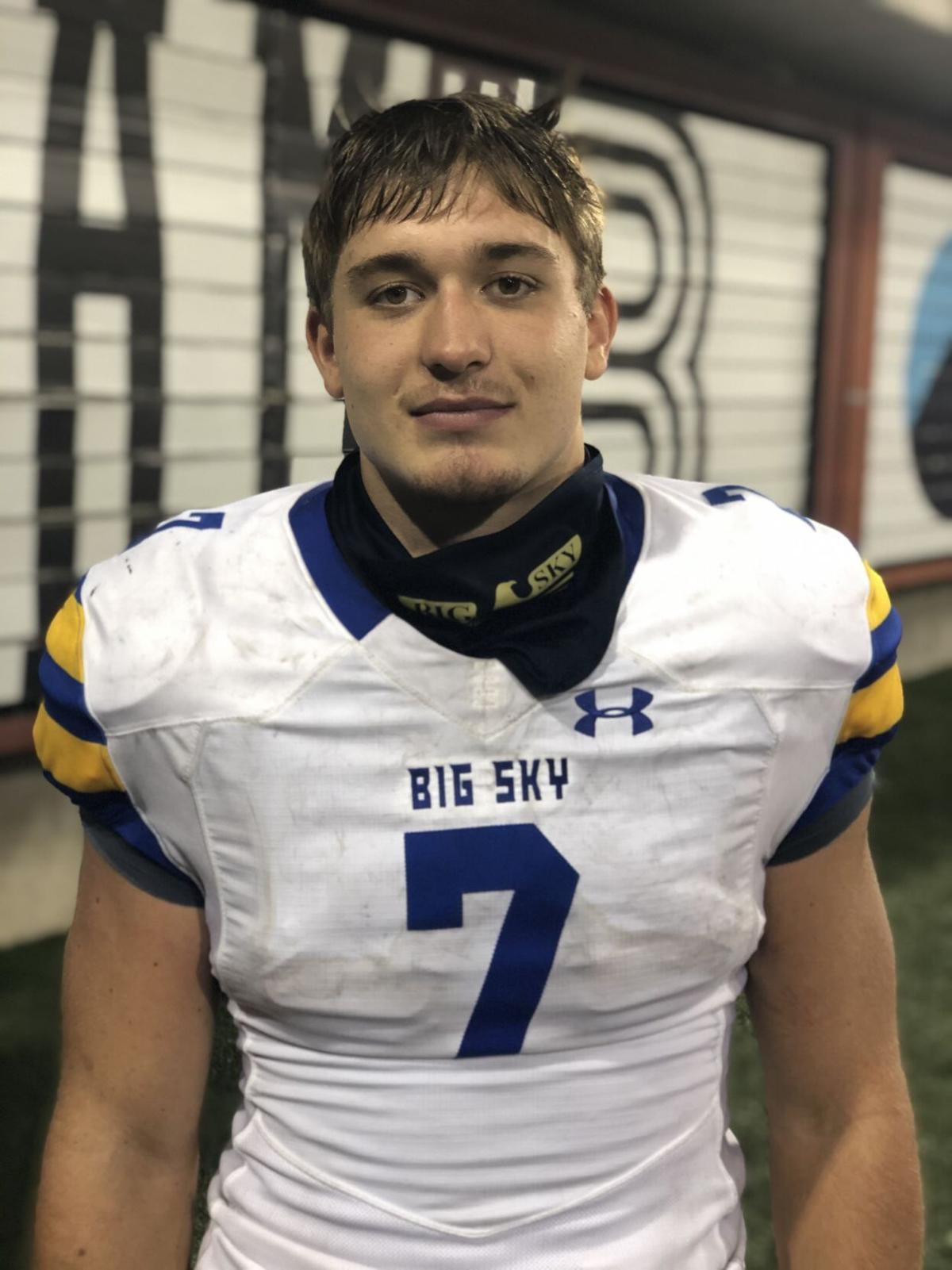 Missoula Big Sky's Tre Reed (3) catches a pass in over Hellgate's Ian Finch (11) and Asher Topp (2) during their game at Washington-Grizzly Stadium on Friday night. The Eagles defeated the Knights, 48-20.

MISSOULA — Missoula Big Sky showed what it's capable of when it toppled eventual state champion Bozeman last year in the second game of the football season.

But Colter Janacaro, now back under center for the Eagles, suffered a knee injury on the Hawks’ final offensive drive while playing defense, limiting his time on the field the rest of the season. Now fully healthy, he’s hoping to turn last year’s injury setback into a comeback for his senior season.

He acquitted himself well in the season opener Friday, totaling 347 yards of offense and five touchdowns as the Eagles rolled to a 48-20 win over Missoula Hellgate at Washington-Grizzly Stadium, matching their win total from last year.

“I’m excited. It’s like a comeback year,” Janacaro said. “I’m putting everything on the line this year.”

Janacaro combined his vision to cut back, his ability to slip through tight holes and his bruising bulldozing power to rack up 270 yards and four touchdowns of 6, 1, 1 and 17 yards on 27 carries. He finished 15 yards shy of the school record of 285 yards set by his brother Levi Janacaro, now a linebacker with the Montana Grizzlies.

It was hard for Hellgate to bring down the 6-foot, 205-pounder who sees himself as a mobile quarterback, and that ability to run through people played into coach Matt Johnson’s decision to put Janacaro at quarterback after splitting time with players in previous seasons.

“I have to give my line a lot of credit,” Janacaro said. “I think we have a bunch of athletes. It’s all about if we decide to put everything on the line all season long. I think we could take anyone on in the state. I’d like to think state title, champs. I know we all want to.”

Janacaro, though, wasn’t pleased with his passing. He completed 6 of 14 passes for 77 yards, one touchdown and one interception.

He did flash some potential when he converted a fourth down on a pass along the sideline while rolling out to his left, when he lofted a 34-yard touchdown pass over two defenders to junior wide receiver Tre Reed and when he threw for a 2-point conversion to Shawn Huseby.

“I know tonight we didn’t connect on a bunch of them, but it’s the first game, getting a feel, getting comfortable back there, and I think he showed at times what he can do when he’s slinging it,” Johnson said. “We’ve got to work on that still, but I think that’s one of the big parts he improved upon from last year. A lot of it’s going to be confidence.”

Big Sky's defense provided a challenge for Hellgate senior quarterback Dante Maiuri, a transfer from the second-smallest classification in Washington. When he got time in the pocket or rolled out, he showed a strong arm by completing 22 of 43 passes for 248 yards, three touchdowns and one interception.

He had a 14-yard strike to junior Ian Finch, a 28-yard bullet to Leo Filardi and a 1-yard pass to Finch. He also ran seven times for minus-8 yards as the Eagles got to him on blitzes.

Hellgate senior Lucas James left on a stretcher wearing a neck brace during the second quarter after hitting the wall. Knights coach Mick Morris said James was OK and returned to the sideline later in the game.