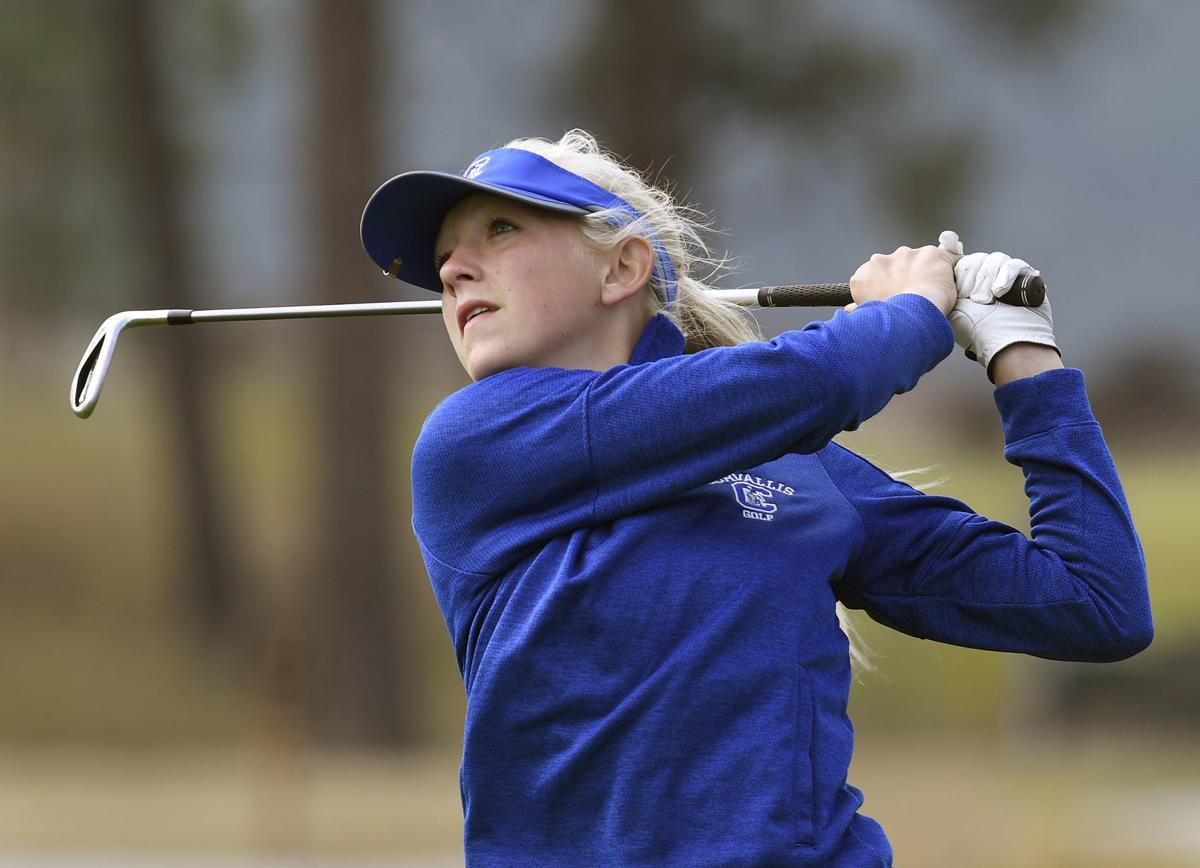 Macee Greenwood of Corvallis hits a tee shot during the second day of the Missoula Invitational at Canyon River Golf Club last fall. Greenwood is the top returning golfer for the Class A girls after a second-place finish last year at the state tournament. 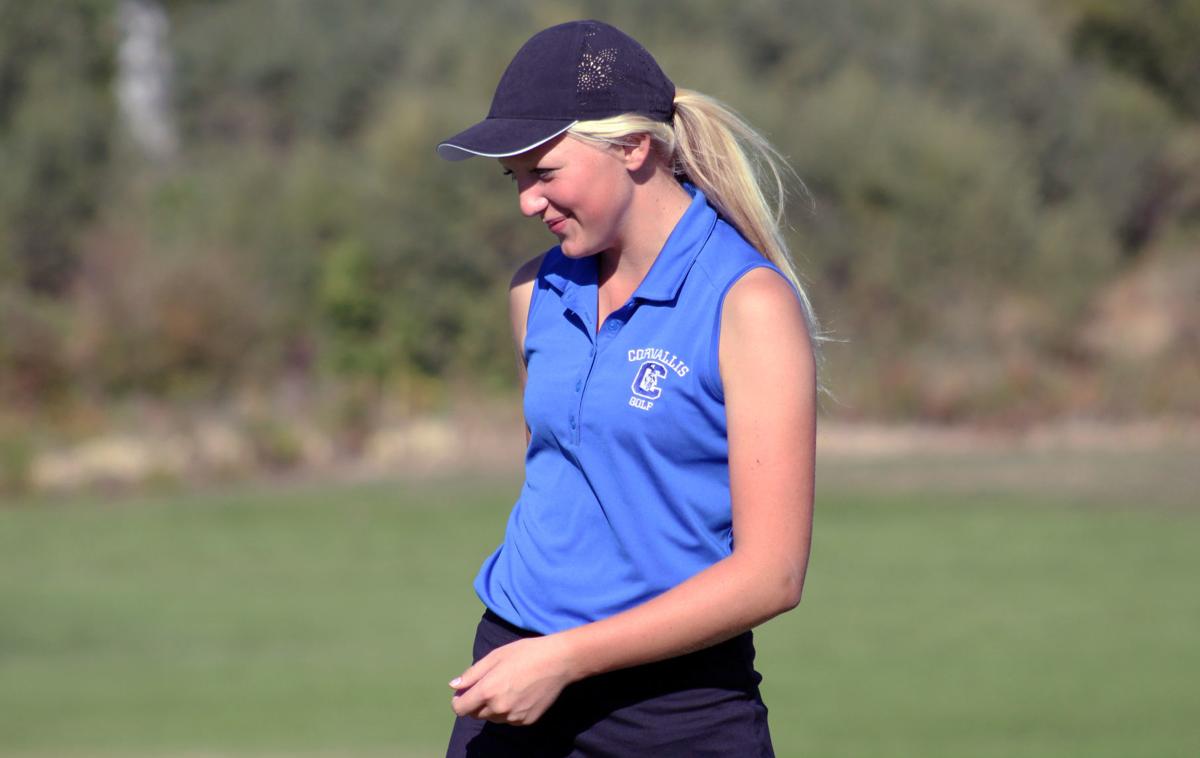 Macee Greenwood of Corvallis hits a tee shot during the second day of the Missoula Invitational at Canyon River Golf Club last fall. Greenwood is the top returning golfer for the Class A girls after a second-place finish last year at the state tournament.

Corvallis' Macee Greenwood is the top returning girls' golfer in Class A this fall. With that moniker, by way of a second-place finish at the state tournament last season, comes a heap of outside expectations.

"Macee, she should win it," Filcher said plainly. "If her game’s there, she’ll win it all."

Those expectations can be a double-edged sword, though. While they're built on reputation and talent, they can break the back of a golfer's mind.

So how is the sophomore golf star able to relieve the pressure?

"I’m just going to go in like it’s nothing and play my game and see the end results," the soft-spoken but fiercely competitive Greenwood said.

Greenwood grabbed the individual title at the Butte Central Invitational Monday at Highland View Golf Course. She shot a 3-over par 73 to win by 14 strokes.

The winning round, along with Corvallis senior Keelee Storrud's second-place tying score of 87 helped power the Blue Devils to a team title, too. The two returning all-staters provide a 1-2 punch that could help Corvallis recapture some state hardware after finishing in third place as a team last year at the Class A state tournament.

It's certainly Greenwood's hope. Despite golf being individualized in nature, Greenwood loves the team aspect and bond between her, Keelee, as well as Sami Knapp and Signee Storrud, who all scored for Corvallis' first-place finish Monday (369).

The team win means more expectations for the season ahead, of course.

Then there's the expectations Greenwood puts on herself. Coming into her freshman season last year, Greenwood had played in the Montana-Alberta Ryder Cup, the American Junior Golf Association and a handful of other prestigious tournaments. Expectations were high for Greenwood then, too.

Before her sophomore season they're now at a fever pitch, but Greenwood says she feels better prepared.

"...I played in some bigger tournaments these last couple years, so I'm just trying to look at high school as another golf tournament," Greenwood said. "I’m not as nervous going into this year as I was last year."

Remember, last year all Greenwood did was finish in second place at the Class A state tournament with a two-day score of 78-79—157. That was just five strokes off of Butte Central's Tricia Joyce's winning score of 152. Greenwood's score was also 16 strokes better than third place.

Joyce, who was a senior, has since graduated. That leaves one name left atop the leader board headed into 2019.

Corvallis coach Kristy Schlimgen explained how looking inward not only will help Greenwood ignore any perceived target on her back, but it is the best way to play golf period.

"Golf is a game where you’re battling yourself every time you go out there, and I think that’s what she’ll focus on more is just her own game and her own scores and doing what she can," said Schlimgen, who heads the fourth-year program at Corvallis. "If Macee plays well, she’ll be right in there every time at every tournament."

In one breath, Corvallis coach called Greenwood both "a sweetheart" and "highly competitive." Those might be the perfect ways to define her demeanor on the course and describe her ability to navigate the emotions of 18 holes.

Schlimgen also defined some of Greenwood's likeliest rivals at the state level in similar fashion. Schlimgen coached the Montana-Alberta Ryder Cup team this year, which had Laurel's Haylee Adams on the roster.

Last year, Haylee and her sister, Hannah, finished in a tie for fourth place at the Class A state tournament in Hamilton. Their Locomotives' won the state team title.

"All three of them are really similar," the Corvallis coach said. "They're highly competitive, soft-spoken, really kind and just good, good kids."

For Greenwood, that competitive nature manifests itself in a positive way.

"Macee's definitely competitive, but you might not see it because she’s not like aggressively competitive," Schlimgen said. "But she has high expectations for herself and that’s kind of in all areas."

That includes the classroom, where Greenwood is a standout student, and the softball field, where she was named honorable mention all-conference for the Blue Devils last season as a freshman.

Just like a golf club, Greenwood excels at swinging the bat. According to Corvallis' game changer, Greenwood was second on the Blue Devils' softball team in total hits (29), home runs (3) and third in batting average (.460) for a Corvallis team that led the Southwest A conference in offense.

She's talented — and she's humble enough that others have to tell you.

Fortunately a golf game like Greenwood's speaks for itself.

Guide to the 2019 Class AA and A golf seasons