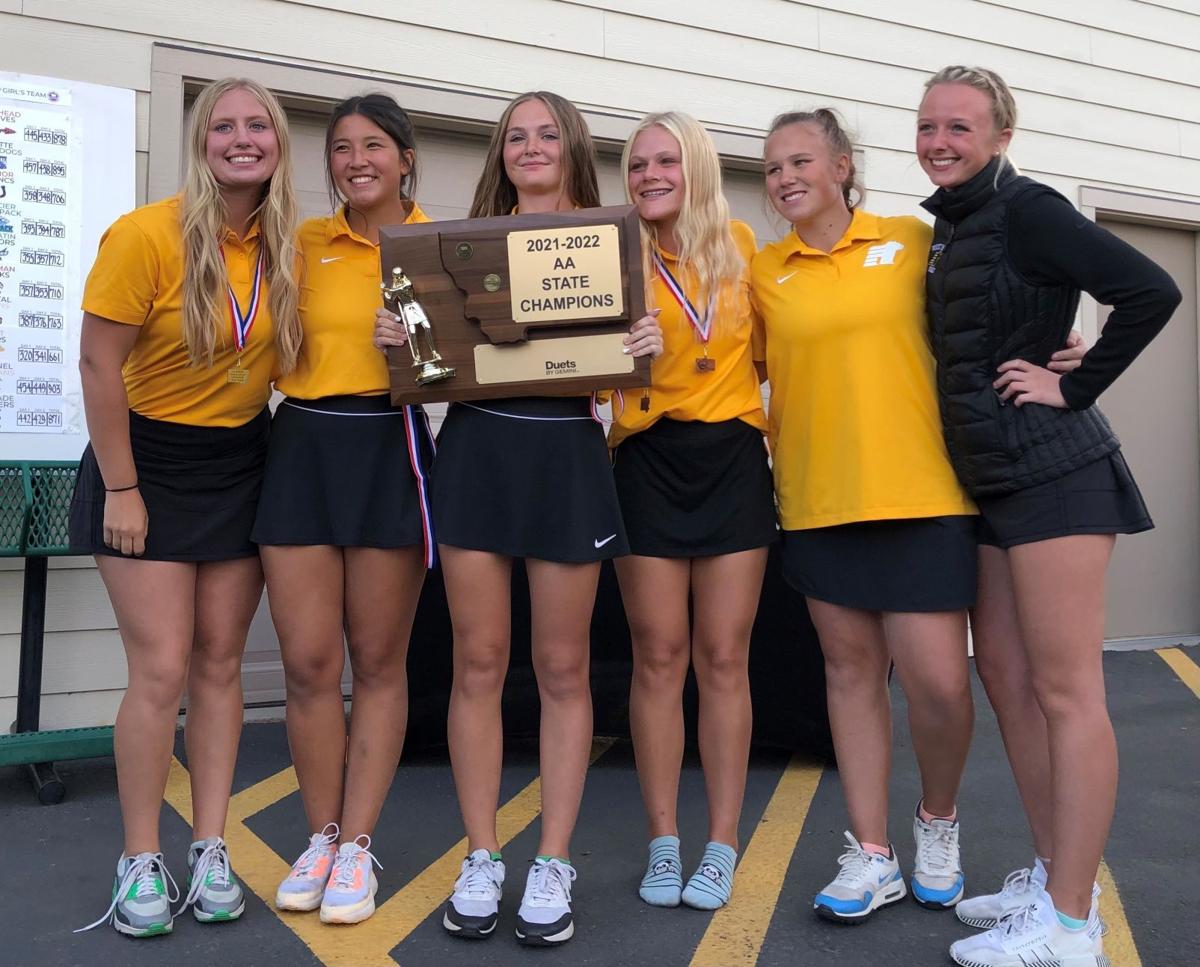 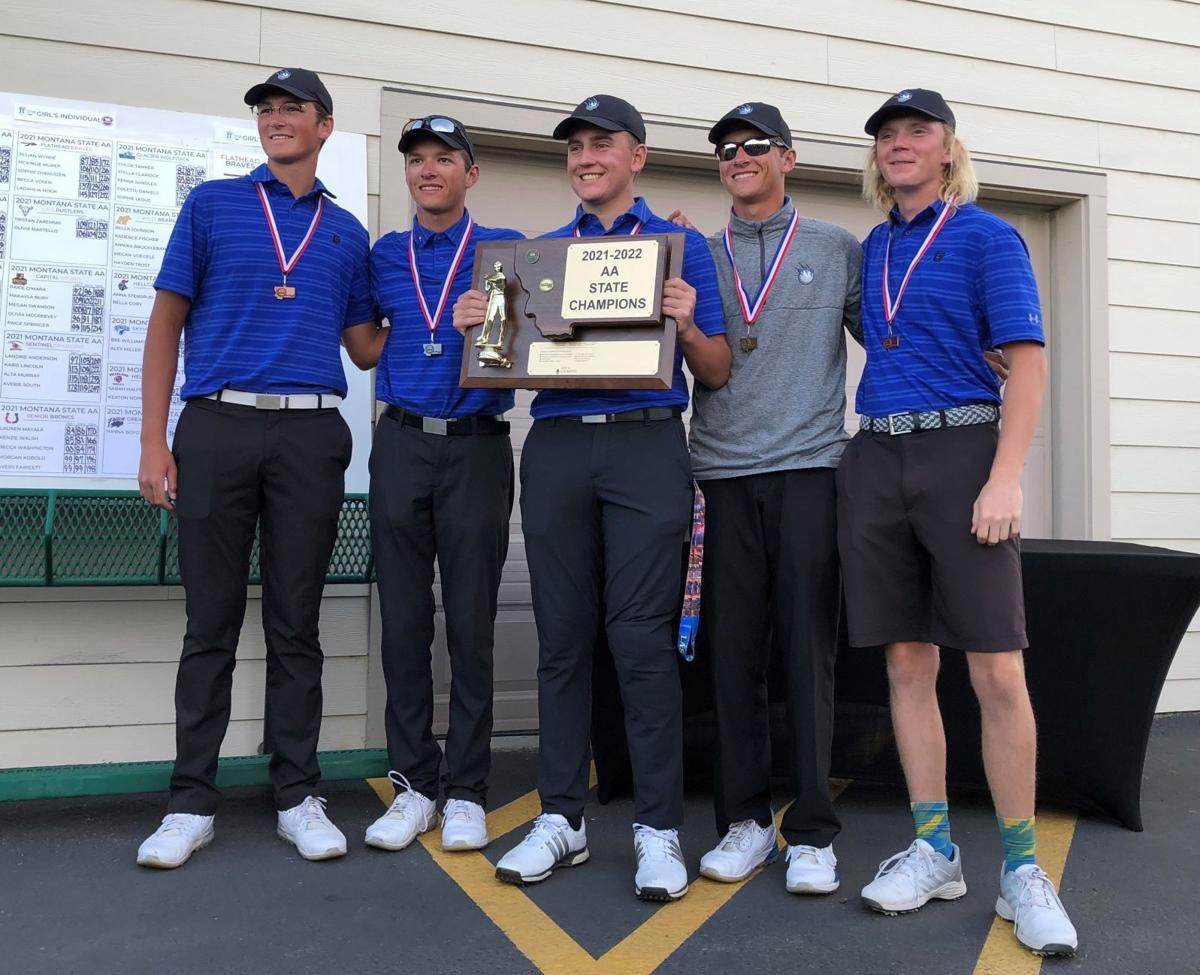 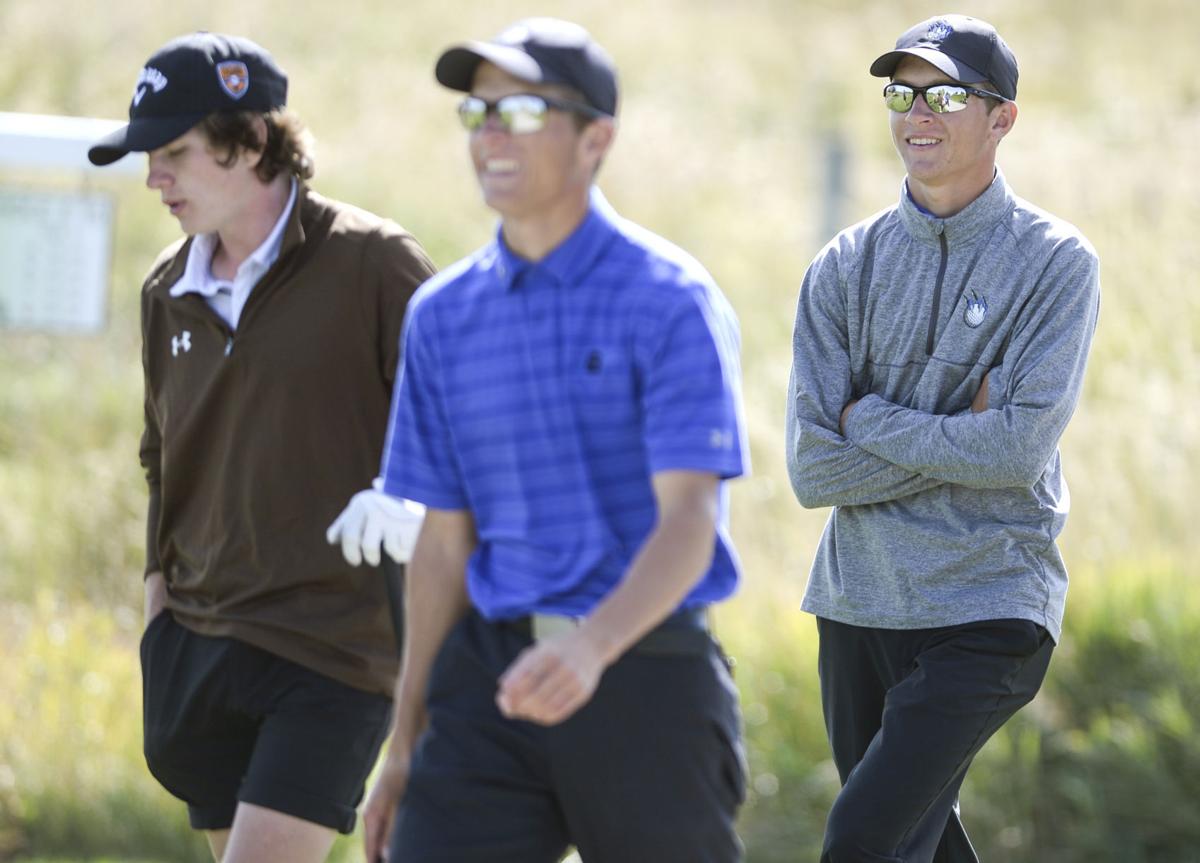 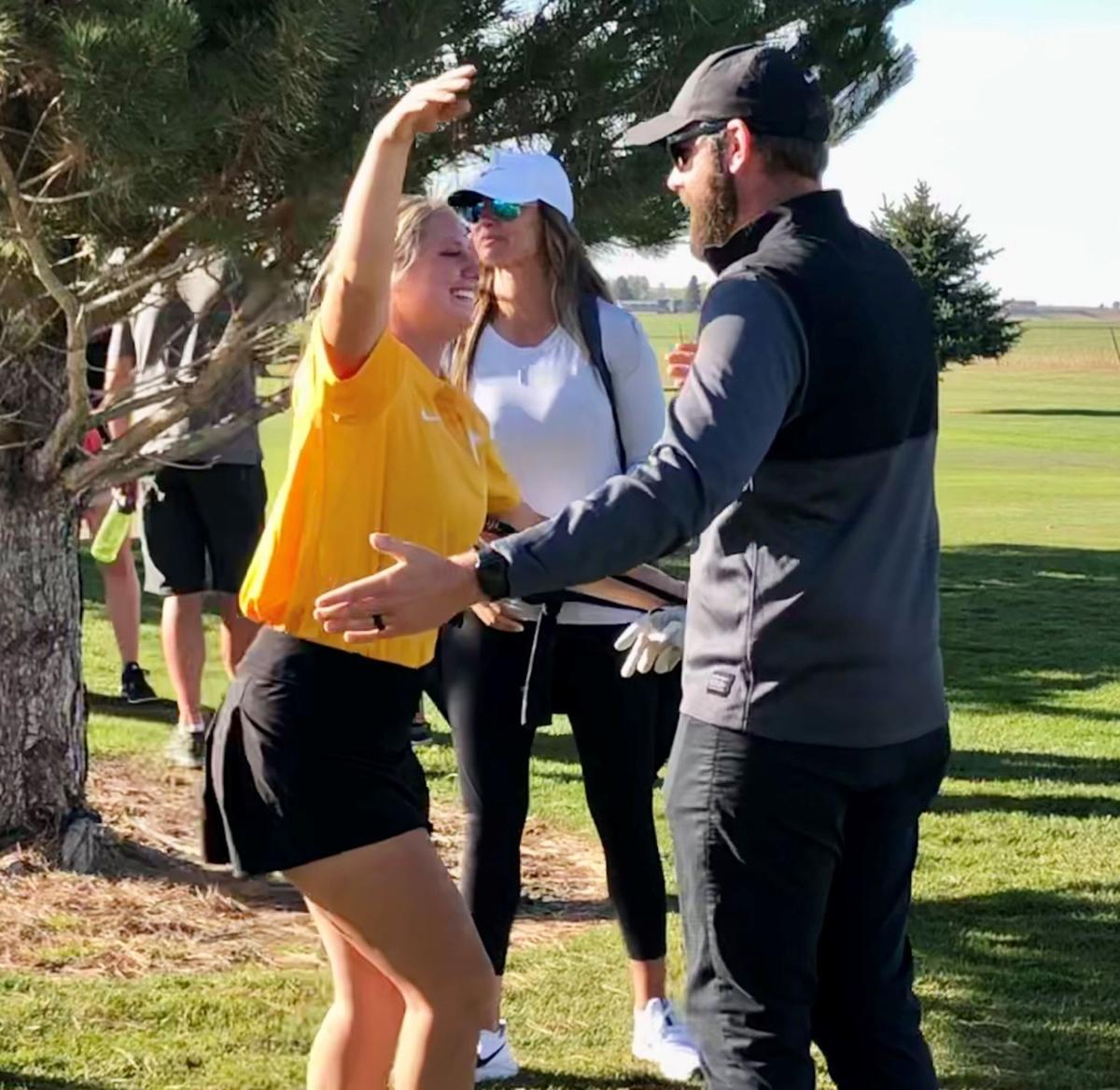 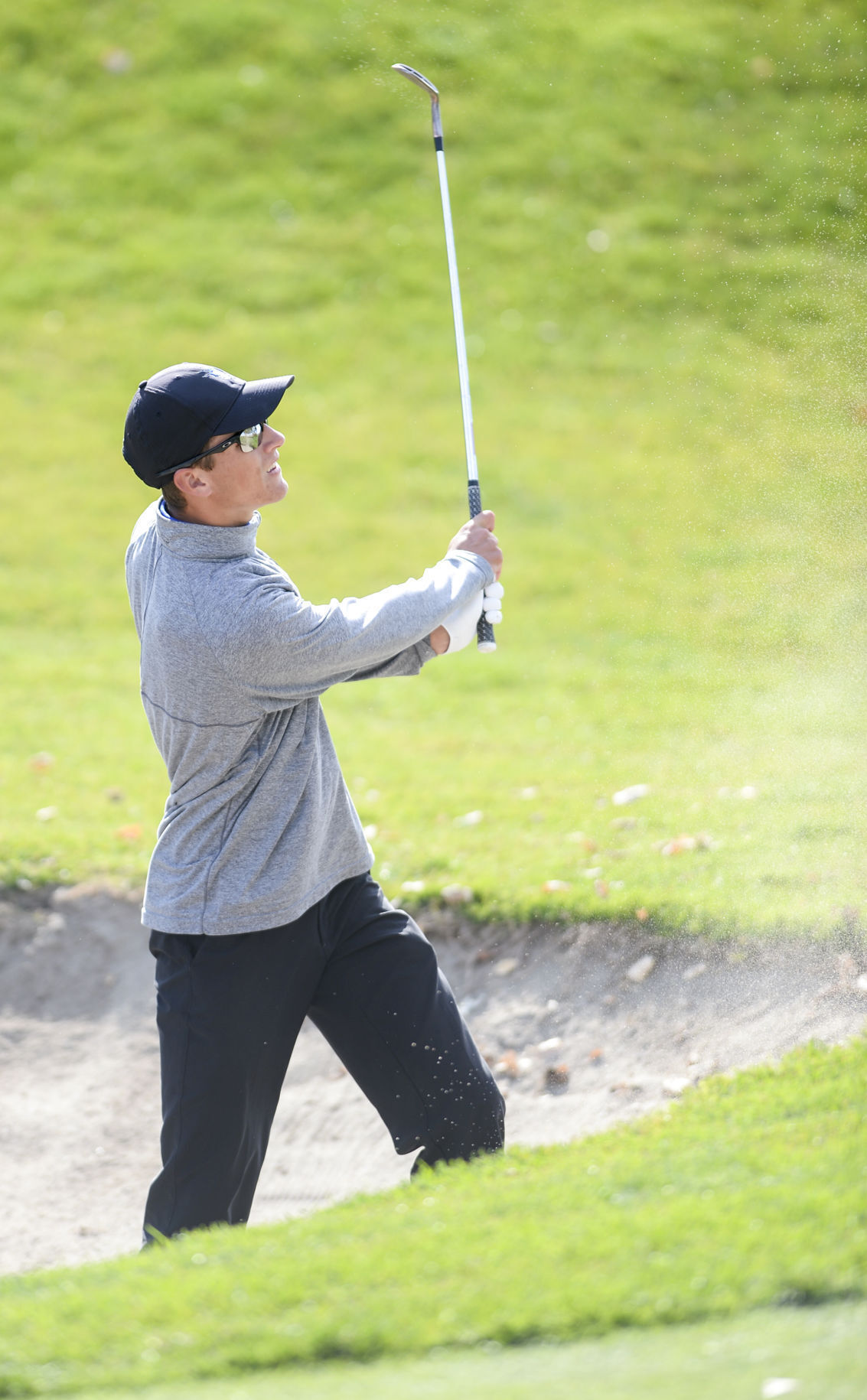 Bozeman Gallatin's Jordan Verge hits a bunker shot during the final round of the Class AA state golf tournament on Friday at Cottonwood Hills Golf Club. 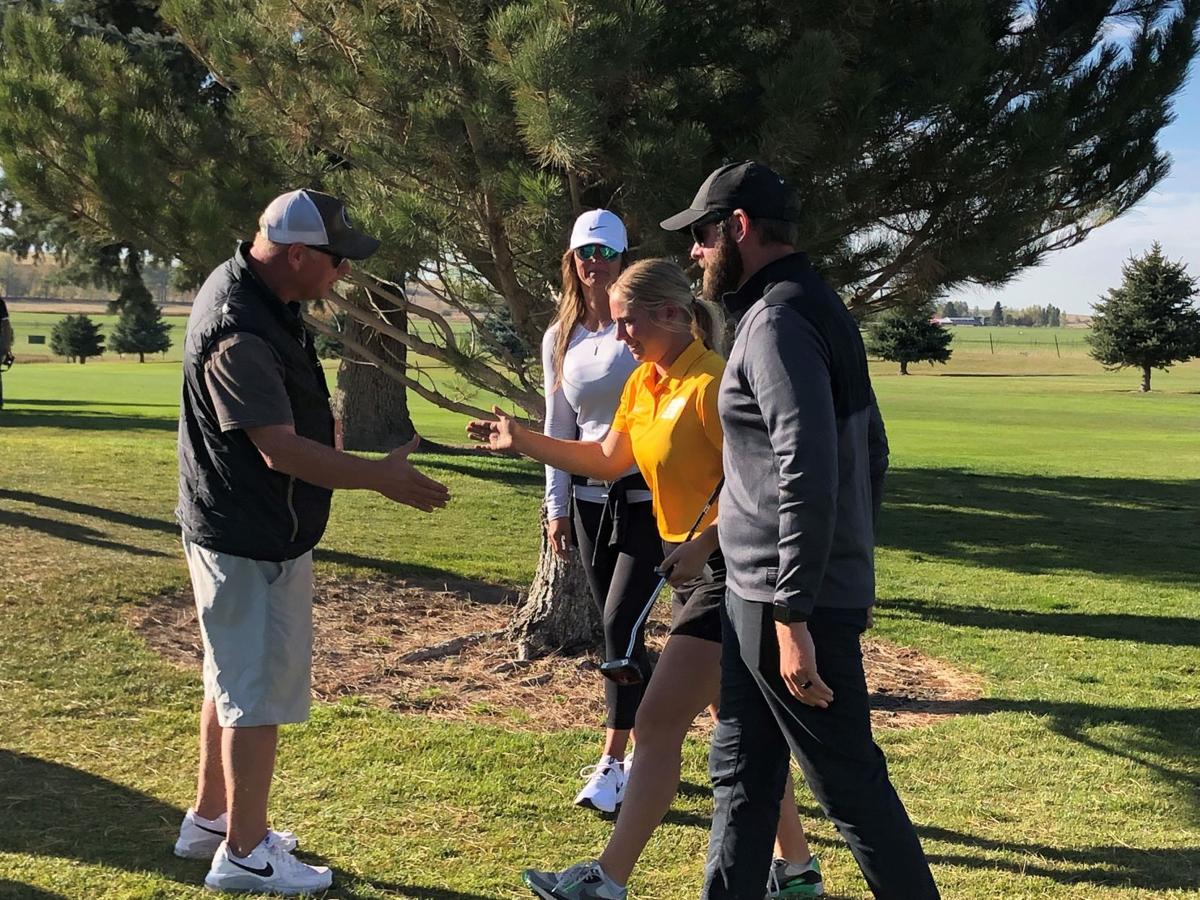 Billings West took its ninth girls team championship, and West sophomore Bella Johnson rolled to her first individual title on Friday at Cottonwood Hills Golf Course. So did boys medalist Jordan Verge, who helped Bozeman Gallatin finish on top of the boys team race for the first time in its two-year history. It’s Gallatin’s first team title in any sport.

This is the first time since 2015 that a team other than Bozeman has won a State AA girls team title. The Golden Bears not only ended the Hawks’ streak, they won their first state title since 2014 and capped an undefeated season.

“We all weren’t trying to win for ourselves. We were trying to win as a team,” Johnson said. “Having the drive throughout the whole team was kind of like, ‘OK, we have a really good shot at state this year, so let’s try to bring it home.’”

Before Johnson, the Bears’ last individual champion was Carrie Carpenter in 2019.

Johnson fired a 2-under 71 on Thursday. The same score on Friday would have broken the top state girls mark of 143, set by Missoula Loyola’s Maggie Crippen in 2012. A 72 or better would have topped the best State AA two-day girls score of 144, set by West's Hayden Flohr in 2015.

Johnson carded a 77 on Friday to finish the tournament at 2-over 148, tied for the sixth-best score in State AA history.

Johnson admitted that she was gunning for the record. Her chances looked good after a first-hole birdie, but she bogeyed Nos. 4 and 10 and double-bogeyed Nos. 6, 8 and 11.

Johnson began to cry as she realized both of the records she was chasing were realistically out of reach.

“It was a little frustrating for me, knowing that, like, ‘You can’t mess this up,’” she said. “‘You could have a record here.’”

Her lead was also down to five strokes after the 11th. Butte’s Kodie Hoagland was 1-under for the round, and she was in Johnson’s group, so Johnson could see her advantage disappearing right in front of her. Johnson told herself, “pull yourself together,” and, “you’re better than this.”

Johnson, who plans to get surgery soon for a torn labrum in her left hip, shot 1-under on the final seven holes and finished seven strokes ahead of Hoagland.

“The day didn’t go as I wanted, but you know what, I’m not going to complain because I won. It’s very exciting,” Johnson said. “I don’t really know how to react right now. I’m grateful for everyone who’s put me through this, especially my coach and my parents.”

She was also thinking about her good friend Kadence Fischer, a senior at West who played in Johnson’s final-round group. On the 18th hole, Johnson told Fischer she couldn't look at her because she would cry if she did. Fischer was the first person to hug Johnson after the title-winning putt, and Johnson’s tear ducts opened up.

“The last hole hit and I was like, ‘I understand that I’m bringing home a state title right now as an individual, but one of my really good friends who I’ve competed with for 10 years, she’s leaving me,’” Johnson said. “Makes me tear up a little bit. I’m sad that she’s leaving. It was special, though. I don’t really have words for it.”

The Golden Bears needed a team score of 317 or lower on Friday to break the State AA girls team record of 638, set last year by Bozeman. They ended up with a final round of 341 and a total score of 81-over 661.

West finished second to Bozeman at each of the last four State AA tournaments.

“That motivated them, especially going into the season,” West coach Marcus Drange said, referring to his players. “I felt that this season was an opportunity for us to get over the hump … and we ran the table. To see that is pretty dang cool.”

Like Johnson, Drange got emotional after the tournament ended, once he realized his team had secured first place.

“We had high expectations all season long, and it’s just cool to see it happen,” Drange said as his eyes began to well up. “They have worked so hard. It’s awesome.”

Billings Senior finished second (706) among girls teams, while Bozeman was third (710) and Gallatin was fourth (712).

The identical twins shot identical 1-under 71s on Thursday, and Justus was ahead by one stroke through 10 holes. Justus played well on his final nine and finished with a 2-under 70, the second-best score of the entire tournament. His brother made it look pedestrian.

Jordan shot a 6-under 30 on his final nine holes (the front nine at Cottonwood Hills), thanks to a professional-level display of ball striking.

He stuck his approach shot on No. 3 (his 12th hole) to about five feet and sunk the birdie putt. On the next hole, a par 3, Jordan hit his tee shot off the toe of his club face, yet it almost went in for a hole-in-one. He gave a little fist pump after draining the short birdie putt to go up two strokes.

Gallatin’s Jordan Verge nearly hits a hole-in-one on No. 4 at Cottonwood Hills Golf Club (his 13th hole). His birdie gives him a two-stroke lead over his brother Justus. #MTscores pic.twitter.com/gjBNJU34ku

Justus chipped in for birdie on the next hole, while Jordan narrowly missed his birdie putt, and the lead was down to one. But no momentum was turned.

Jordan hit his wedge to two feet on No. 6. This time, Justus missed his birdie putt, and Jordan went back up by two.

More counterpunching from the @GallatinRaptors twins. Jordan sticks his approach to two feet and makes birdie. Justus also hits a good approach but settles for par.

Jordan, who’s now up by two, is the one at the start and end of the video. #MTscores pic.twitter.com/WyNCTgKxqx

Jordan effectively ended the individual race a hole later. His second shot on the par 5 was from 165 yards away, and the ball was lying above his feet. Jordan pulled a 7-iron and hit his shot pin high on the right side of the curvy green. The ball stopped about three feet away from the pin, and he made the eagle putt to build his lead to four strokes.

“When I made that (chip on No. 4), I was one down off of Jordan. Then he went off to go birdie-eagle on the next two holes, so that kind of took me out,” Justus said with a laugh. “He played great golf, so he definitely deserved to win.”

A double bogey or better on the final hole would have been enough for Jordan to win the state title. He went with better, chipping in front the left side of the green for the final shot of his high school career.

“When I saw it tracking to the cup, I was getting pretty excited,” Jordan said. “To end it that way, it can’t get any better than that.”

Jordan placed second in both the 2018 and 2019 state tournaments, as he did last year to Missoula Sentinel’s Kade McDonough. Jordan finished four strokes behind Justus two years ago and McDonough last fall.

Both Verges wore Air Jordan golf shoes during the final round, as did one of their playing partners, Helena Capital’s Joe McGreevey, whose Jordans were the same color and model as Jordan’s.

“Today, everything clicked,” Jordan said. “I don’t know what it was, to be honest. It was just one of those days where everything went right.”

After the round, Justus said he and Jordan have committed to play college golf at Palm Beach Atlantic, a private Christian Division II school in Florida.

“We both cheer each other on,” Jordan said. “The last few months, Justus has been playing better than me. For me to peak at this right time, it was awesome.”

McDonough, now a sophomore, finished tied for 10th at 8-over 152 this week. Butte junior Jack Prigge was third (even-par 144), and McGreevey tied Kalispell Glacier’s Will Salonen for fourth (2-over 146).

That score of 581 is six strokes short of the State AA boys record, set by Bozeman in 2018. Both Verge twins and fellow senior Ramey Lloyd were on that team. All three moved over to Gallatin when it opened last year.

“Team is what matters the most in these tournaments,” Jordan said. “To win it for myself and for the team to win, it’s amazing.”

CORRECTION: A previous version of this story listed the incorrect most recent individual girls winner from Billings West. That has been fixed.

Bookmark this link for coverage of the Class AA and A golf tournaments from Bozeman and Polson.

West's Bella Johnson has a huge lead, and Gallatin's Verge twins are narrowly ahead.