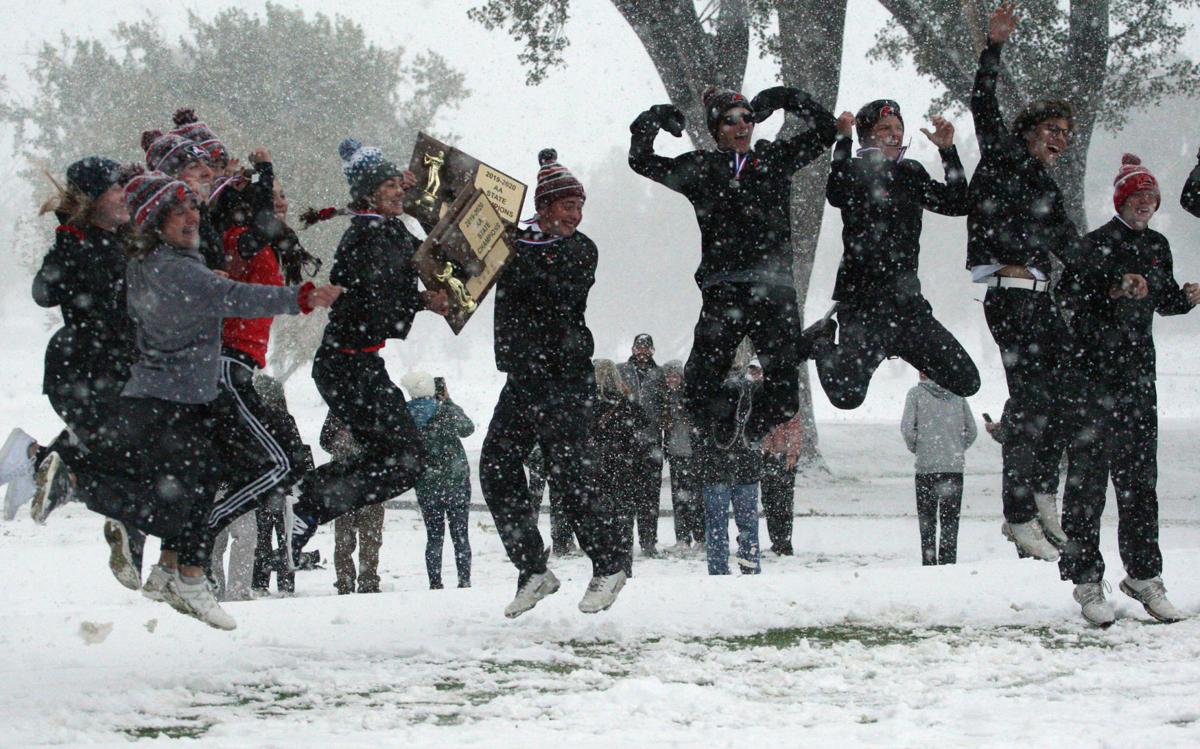 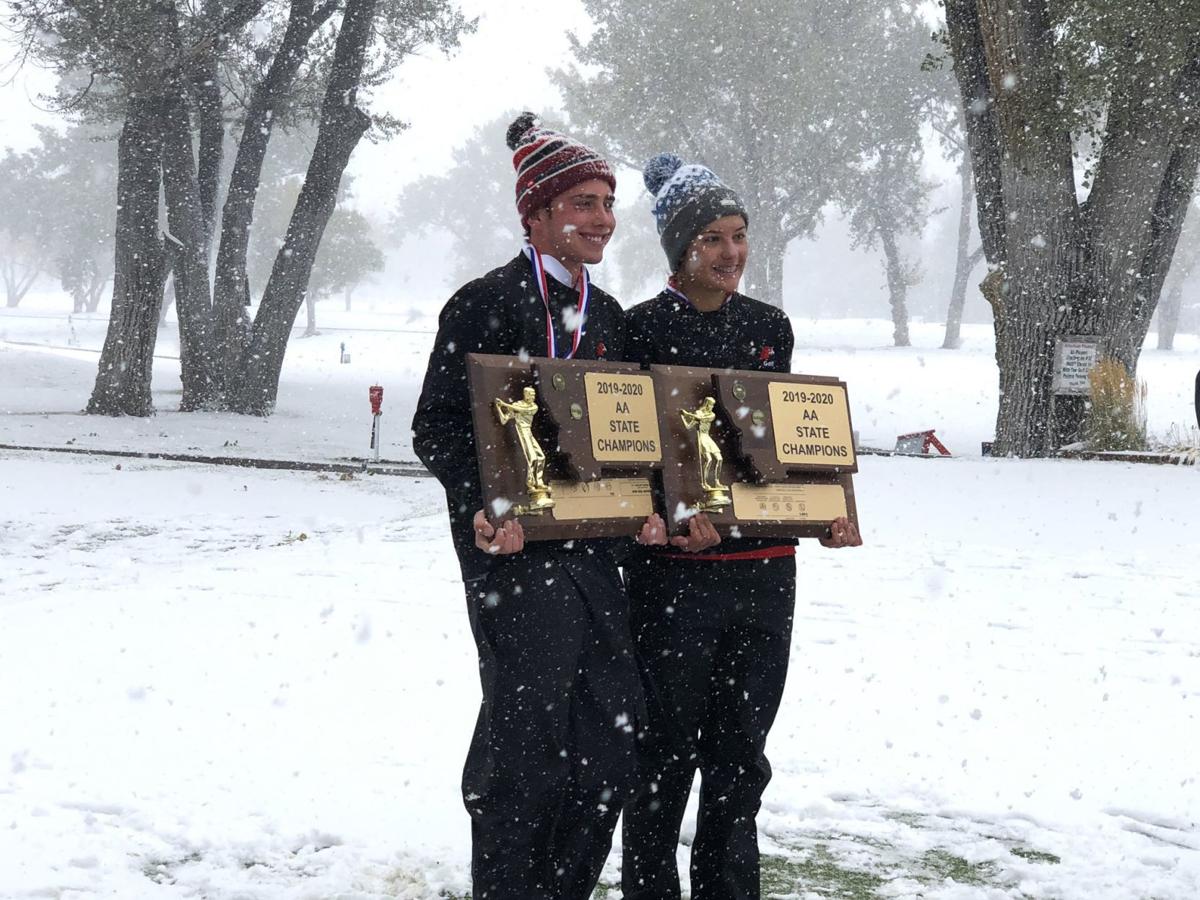 The Bozeman boys and girls teams swept the team titles at the State AA Golf Tournament at Meadowlark Country Club in Great Falls on Tuesday. 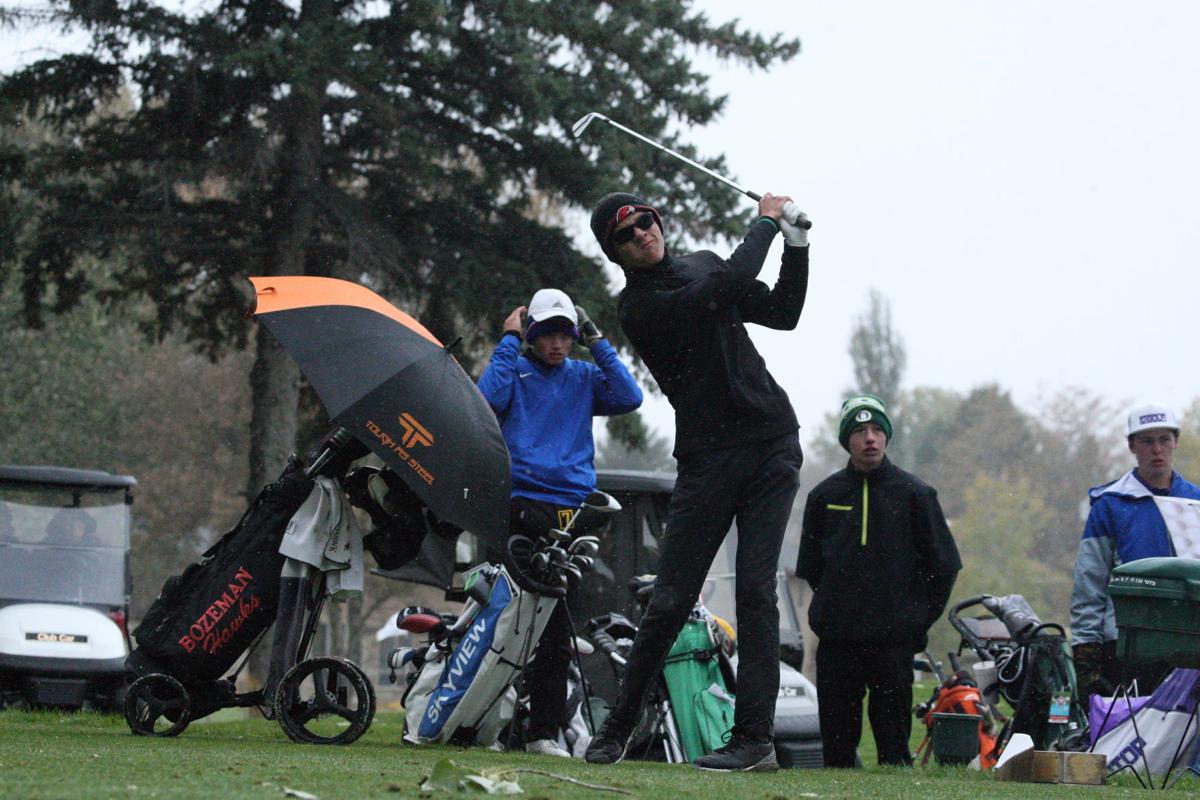 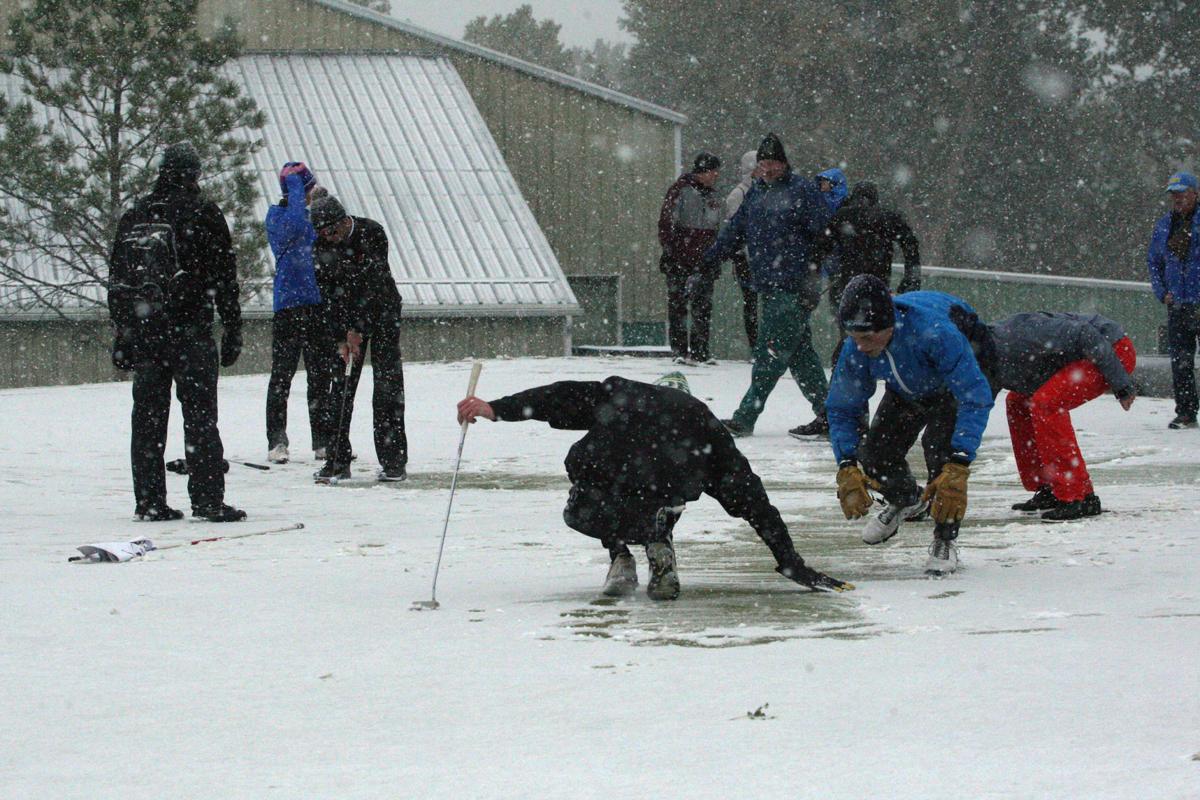 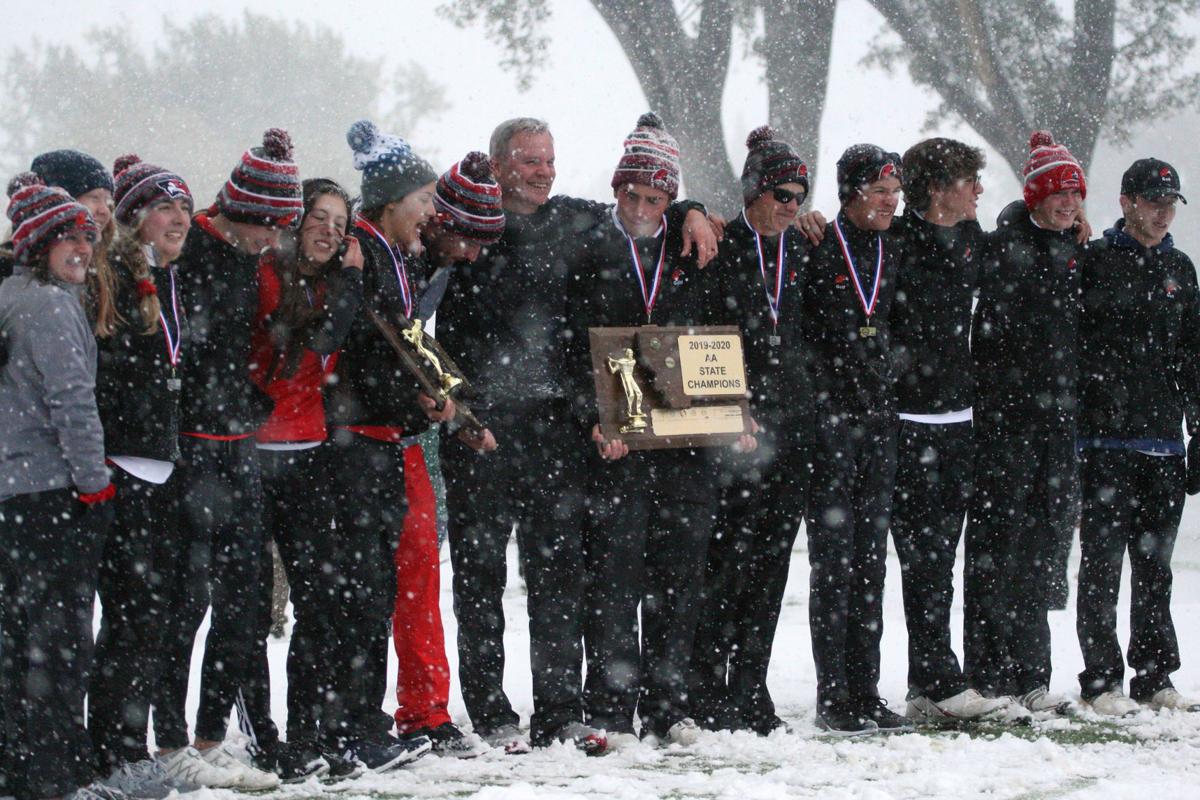 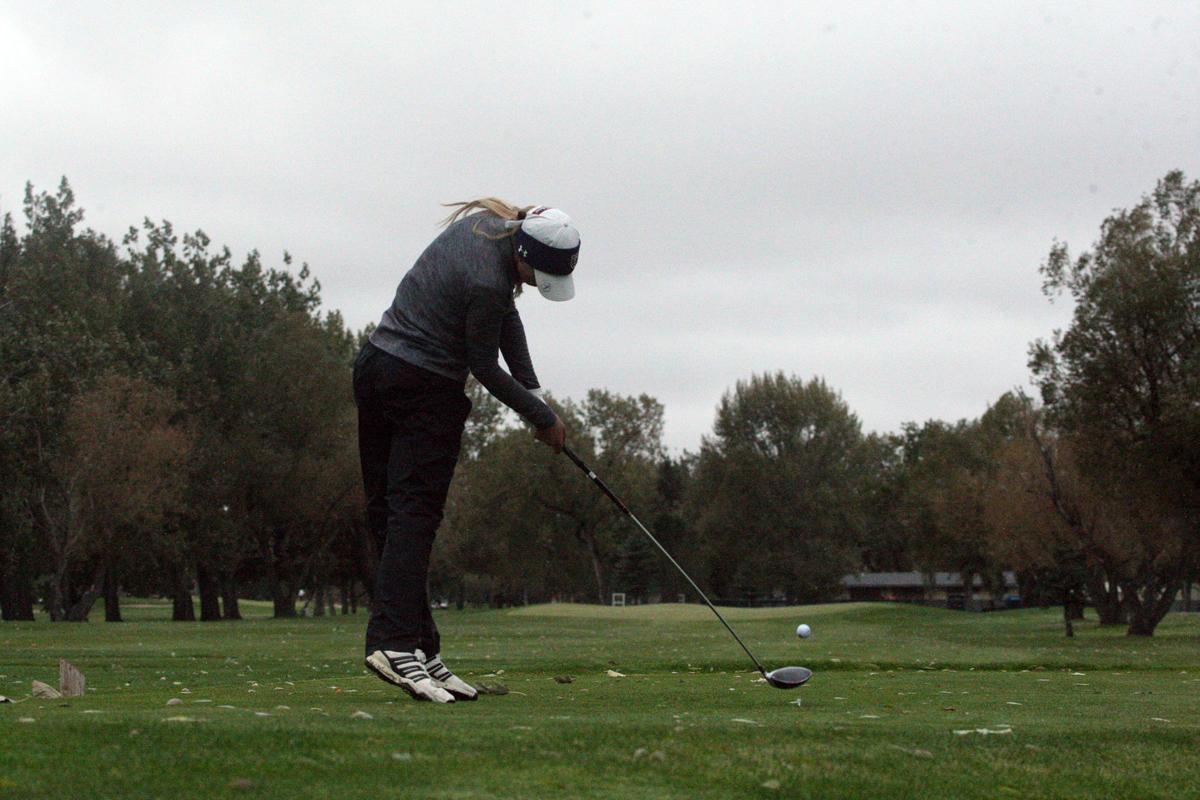 The Bozeman boys and girls teams swept the team titles at the State AA Golf Tournament at Meadowlark Country Club in Great Falls on Tuesday.

As Justus Verge watched several people wipe their gloves along the 9th green at Meadow Lark Country Club in attempts to clear the surface from the settling-snow, the sophomore smiled and said four simple words.

Verge’s joy in the game makes sense. For the second year in a row, Verge took top scorer at the Class AA State Golf Championships, in the process of contributing to the Bozeman Hawks’ second-straight men’s title.

When the snow began to fall as the competitors were taking their back nine, many couldn’t be shocked by the blanket of white. After all, this is Montana.

However, what may have been shocking was how the Hawks responded: all four contributing competitors either matched their first-day scores or, in Verge’s case, dropped a couple shots.

Verge followed a one-under-par 71 with a 73, while his brother Jordan (74) and teammates R.J. Small (82) and Ramey Lloyd (82) all matched their starting scores, placing the trio at second and tied-for-eighth respectfully. Verge says that the snow, setting and situation all made for a memorable victory.

“This is pretty special,” Verge said. “We owe a lot to the seniors this year, and it’s also me, Jordan and Ramey Lloyd’s last year as Hawks. It being our last chance, we felt like seniors too so we all worked hard to go get the win.”

The addition of Gallatin County High School will shake up the Hawks, but both the players and head coach Matt Clark could care less at the moment. While his boys were maintaining a dominant start, the Bozeman girls overcame a six-shot deficit to claim their impeccable fourth-straight state championship.

The Hawks’ girls were led by junior Cooper Knarr, who responded to an opening round 85 with a determined 78, enough to take runner-up as an individual and help propel Bozeman to their title.

What was the snow-piercing secret for Knarr? Stick to your guns and be patient on the greens.

“Honestly, my ball flight wasn’t affected that much by the snow,” Knarr said. “I stuck with what I was doing well, but putting was a struggle, just because of the slowness of the greens once the snow came down.”

Clark made it a point to not compare championships, but in terms of memorable conditions, the four hours of snowfall easily beats out the competition.

“In terms of conditions, this one takes the cake,” Clark said. “We barely squeaked it in, and I was nervous all day that we wouldn’t. I’m proud of them and I won’t forget today.

A year on from losing a four-shot lead heading into day two of the 2018 championships, Billings West senior Carrie Carpenter took her chance. Despite the frigid conditions and overwhelming amount of snow, the Golden Bear matched her opening day score of 75 with another.

Executing in the conditions was the least of Carpenter’s issues as she led Billings West to a second-place team finish. Instead, it was making sure she won the mental battle and to not let her focus get away from her.

“My process didn’t change,” Carpenter said. “Just had to stay in the present, take it one stroke at a time. I was really happy with how I hit the shots I needed to and stay in it mentally.”

Golden Bears head coach Marcus Drange also credits the senior’s ability to stay within herself, while under a large amount of pressure and in a drastic setting.

“Conditions were tough, but it’s also a tough course,” Drange said. “And [Carpenter] played really well. I think the biggest part for her was the fact that her mental game was solid, she looked to take out the elements and she did exactly that.”

Like the majority of the competition, Butte had a huge challenge with the snow, and the scores reflected that. However, senior Kaven Noctor’s second-day score was only three strokes higher than the first, following his opening 79 with an 82.

Noctor said that he prepared for this situation all the way back in the early spring, but that it’s hard to adjust every aspect of your game for the conditions.

“Pretty much everything gets harder,” Noctor said. “Speed of greens, distance control, everything is a lot harder. I used to practice early in the spring in case this happened at state, but it is what it is.”

The Bulldogs’ boys team finished sixth, improving three spots after finishing ninth after 18 holes. The girls were unable to follow up on their first-day lead, and slid to third after a difficult day in the snow.

“If people could see the course on the last three holes,” said head coach Eric Mankins. “They gave it their all, and so I’m proud of them all. We usually don’t get too much practice in snow, but it is what it is. Like I said, I couldn’t be prouder.”

Sophomore Ella Prigge led the Butte girls with a two-day score of 175, finishing tied-for-seventh. Senior Grace Luoma and junior Kodie Hoagland rounded out the Bulldog medalists, finishing at 185 and tying each other for 12th place.

The West senior rolled to a 13-stroke victory one season after squandering a four-stroke lead in the second round of the State AA tournament.