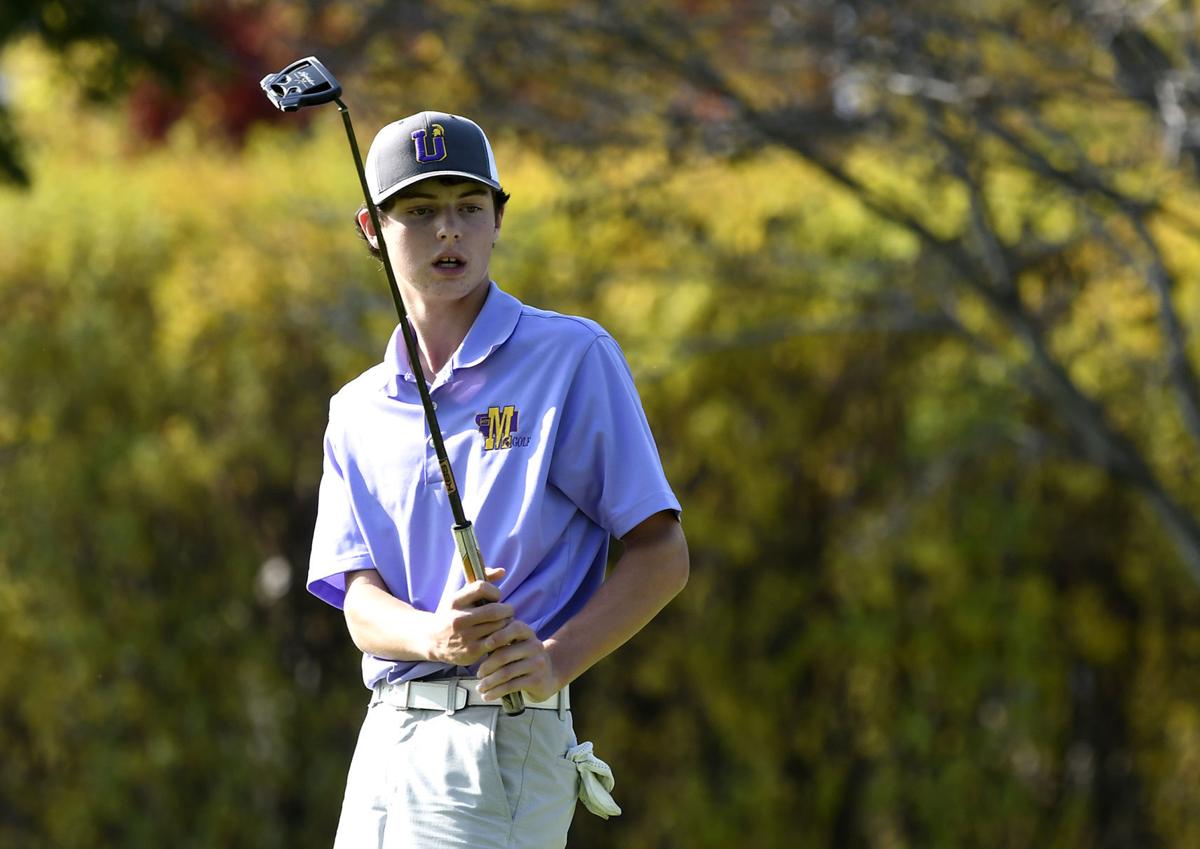 Kade McDonough of Missoula Sentinel watches his putt on the last hole as he wins the boys AA State golf tournament at the Missoula Country Club on Friday. 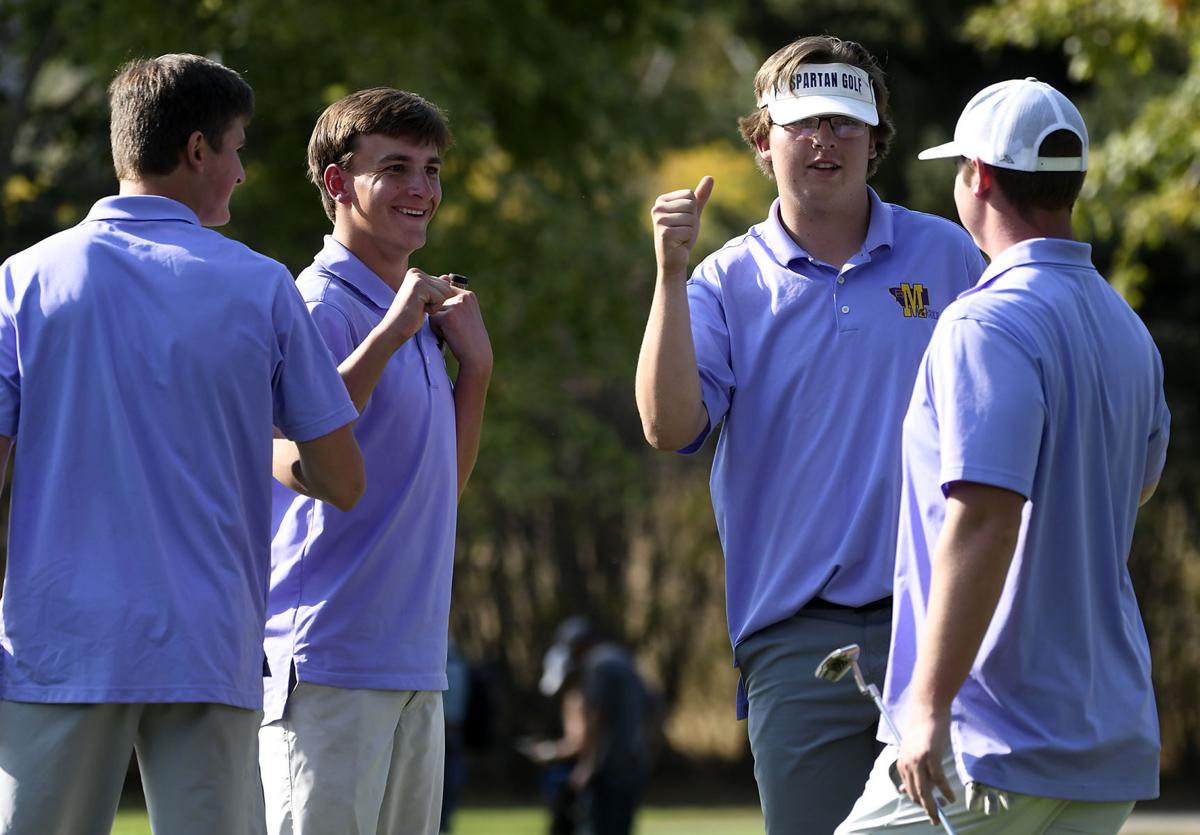 Kade McDonough of Missoula Sentinel watches his putt on the last hole as he wins the boys AA State golf tournament at the Missoula Country Club on Friday.

MISSOULA — Missoula Sentinel freshman Kade McDonough was momentarily swallowed up in a bear hug by his father and nearly had his hat knocked off as he walked off the final green at the Missoula Country Club on Friday.

McDonough had just wrapped up the State AA individual championship, which was quite the accomplishment for a freshman and even more so for a golfer from Sentinel, which hadn’t had an individual state champion since 2005. In doing that, he led the veteran-heavy Spartans to their first state crown since 1999 and the first by a Missoula AA school since 2000.

“I was just thinking, ‘Wow, we actually did it. We won,’” McDonough said after watching the final putt roll in. “It hasn’t hit me yet. I’m pretty chill right now, surprisingly. It’s probably going to feel crazy when it hits me tonight.”

McDonough followed up his 2-under 70 on the first day at Larchmont Golf Course with a 1-under 70 at the Missoula Country Club, his home course, on the second day. He overcame nerves on his first tee shot and worked past a bogey on his fifth hole to sink two birdies, including on the final hole, to earn a four-stroke win over Gallatin’s Jordan Verge.

In staying poised, McDonough became Sentinel’s first state champion golfer, boys or girls, since Logan Ward won the boys title in October 2005 and just the second Spartans boys champ since Dirk Cloninger in May 1979, back in Sentinel’s heyday as a perennial state power.

“I didn’t know that. That’s pretty special,” McDonough said. “Hopefully when I’m gone it can be broken quicker than that. Hopefully I can four-peat. That’s my goal.”

While McDonough chased the individual title, the Spartans were focused on trying to win their first team title after being second each of the previous two seasons. They led Gallatin and Kalispell Glacier by three strokes coming into Friday and overcame a tense morning with a late surge to follow their first-day 305 with a second-day 297, carding a 602 to beat Gallatin by six strokes.

That gave Sentinel its first team state championship since May 1999 and the first by a Missoula AA school, boys or girls, since the Big Sky boys won in May 2000.

“A lot of time golfers get caught up in being perfect, but this is game of recovering, and it was hard today,” Matosich said. “There were some hard stretches for every kid, but everybody dealt with it as best as possible. That’s cool and makes this mean so much more. It’s a good feeling to finally get through and win. All trophies are good, but this is definitely a good one.”

Sentinel junior Joe Opitz followed his first-day 79 with a 72, shooting a 151 to place fifth and earn all-state honors for the third time. Seniors Andrew Hauser and Zach Hangas each were all-state for the first time, with Hauser tying for ninth with an 82-73—155 and Hangas tying for 15th with a 79-82—161.

Senior Jaden Dennis, the lone four-year varsity starter for the Spartans, tied for 20th with a 77-86—163. It wasn’t the personal outing he was looking for, so he switched his focus midway through the second round to making sure he did whatever he could to help his teammates.

“It’s pretty neat to end my senior year at home with a victory,” Dennis said. “Being so close before, it’s always frustrating when you’re second place and then second place again is even more frustrating, so to get the job done, especially at home, was just really cool.

“The team attitude was really good. We kept our heads in it when it could have taken a turn for the worse, but we stayed in there and minimized the damage and did what we had to do.”

Gallatin shot a 608 to finish six strokes behind first-place Sentinel, but the Raptors are still bringing home a trophy in the first state tournament in the school’s history. And they don’t graduate any state participants, so they should be back in the running next year.

“We had higher goals than second, but what a cool thing to bring the first trophy to Gallatin High School,” Gallatin coach Matt Clark said. “We fell short of what our goal was, but I’m so proud of how the guys never quit.

“We were streaky but played well on the first nine, made up some ground on the leaders but then hit a rough patch on our second nine. We just didn’t have our best golf on those holes, and that set us back.”

Gallatin junior Jordan Verge tied McDonough with a second-day-low 70 and ended with a 144 to finish in second. Junior Justus Verge tied for third at 150. Both of them were all-state for the third time. Teammate Stevie Voight placed seventh to earn all-state honors for the first time.

“We all played good. Missoula just played awesome,” Jordan Verge said. “So, we can’t complain about how we played at all.”

Will Salonen paced Kalispell Glacier to a third-place finish, shooting a 152 to finish sixth and be all-state for the first time. Sophomore Tyler Avery got all-state honors for the second time, placing eighth. Teammate Keaton Cassidy tied for 11th to earn his first all-state recognition.

Billings Senior’s Tyler Brunner, Billings Skyview’s Tye Boone and Missoula Big Sky’s Hayden Ellis all picked up all-state honors by tying for 15th. It’s the second honors for Ellis and the first for Brunner and Boone.

Sami Yates became the fourth different Bozeman girls golfer to capture a state title over the past five years, securing her first individual crown and third all-state honors in helping the Hawks win their fifth consecutive team title with a score of 638 to blitz past second-place Billings West by 61 strokes.

“It feels really good,” Yates said of winning the individual title. “I’ve worked extremely hard, I think. It’s really nice to play against girls who work really hard, too, so it means a lot.”

As for capturing the team crown, Yates said: “It feels amazing. I love these girls. They’ve worked so hard. Just seeing their improvement is amazing.”

Yates followed up her first-day 78 with a second-day-best 74 to card a 152, overtaking fellow senior Cooper Knarr, who shot 76-77—153 to place second for the second consecutive season and end her career as a two-time all-state golfer. Franchi Certain finished tied for fifth with a 161 to earn all-state honors, while Sara Priebe shot an 84 for the fourth-best score on the team on day two after Elly Atkins was fourth with an 88 on day one.

“This just shows the consistency in the program and the dedication the players have,” said first-year coach Ryan Nelson, who took over for Matt Clark, who left to coach newly created Gallatin. “I’m just happy for our seniors. They’ve fed off each other all year. I think they thrive playing together. They’re competitive. And it worked out this year.”

Billings West placed second as a team by shooting a 699 to finish six strokes clear of third-place Billings Senior (705). West junior Kadence Fisher tied for seventh to earn all-state honors for third time, and freshman Bella Johnson got all-state honors by placing 14th. The team doesn’t graduate any state participants and could be in good shape next season.

“That Bozeman dynasty right now, they’re hard to beat, but the girls never backed down from the challenge,” West coach Marcus Drange said. “They’ve really taken it head on. There’s no quit in my girls. There’s not a ‘we lost’ attitude; it’s ‘we were still successful’ and are taking home some hardware, which I thought was a mature attitude.”

Gallatin’s Halle Vandersloot tied for fifth and Addiley Lloyd tied for 12th as they each picked up all-state honors for the first time.

Butte’s Kodie Hoagland and Ella Prigge both tied for seventh, with Hoagland earning all-state honors for the third time and Prigge for the second time.

Billings Skyview’s Cierra Sundheim and Billings Senior’s Sami Benson tied for 15th, each getting all-state recognition for the second time.

The Class AA and Class A state golf tournments took place Oct. 1-2, 2020. AA was held in Missoula and A was held in Butte.

Finals results from Day 2 of the Class AA and A state golf tournaments.