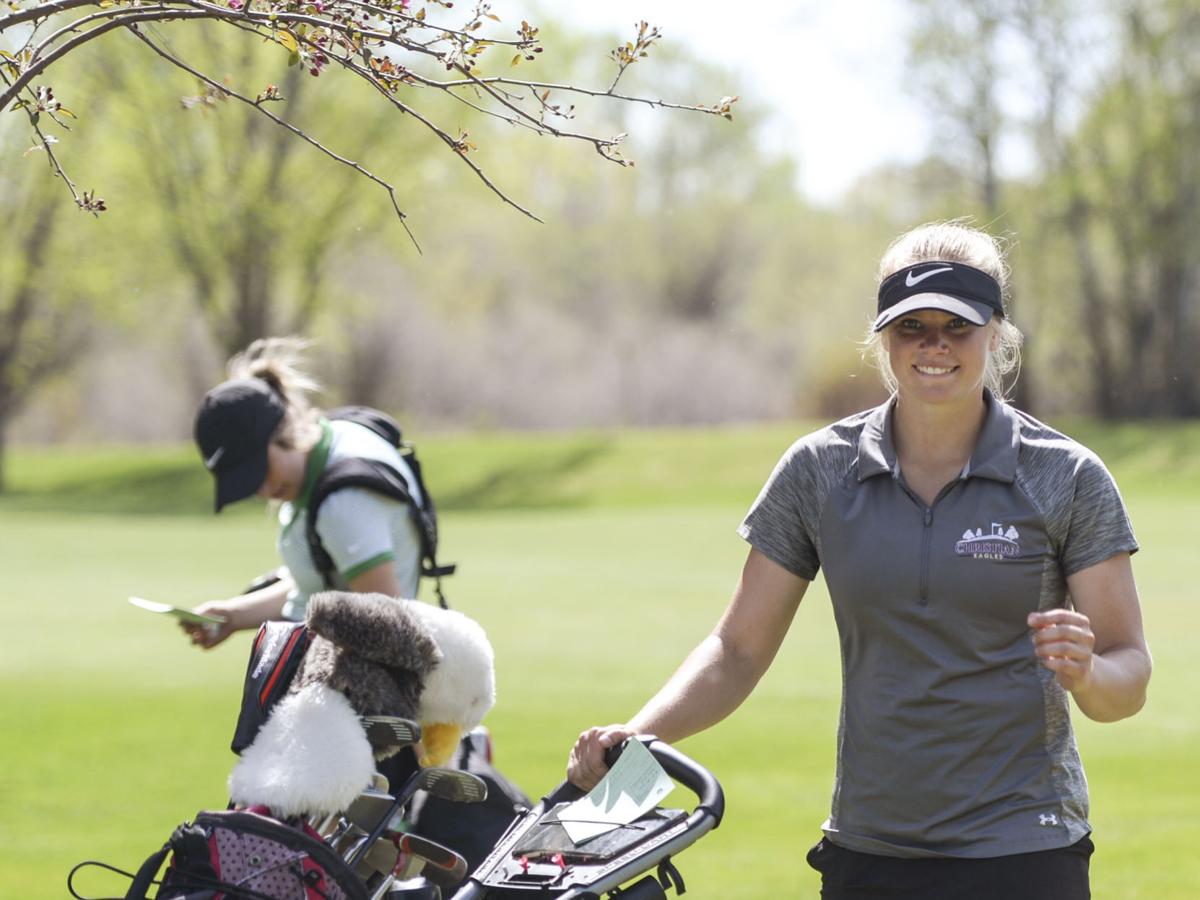 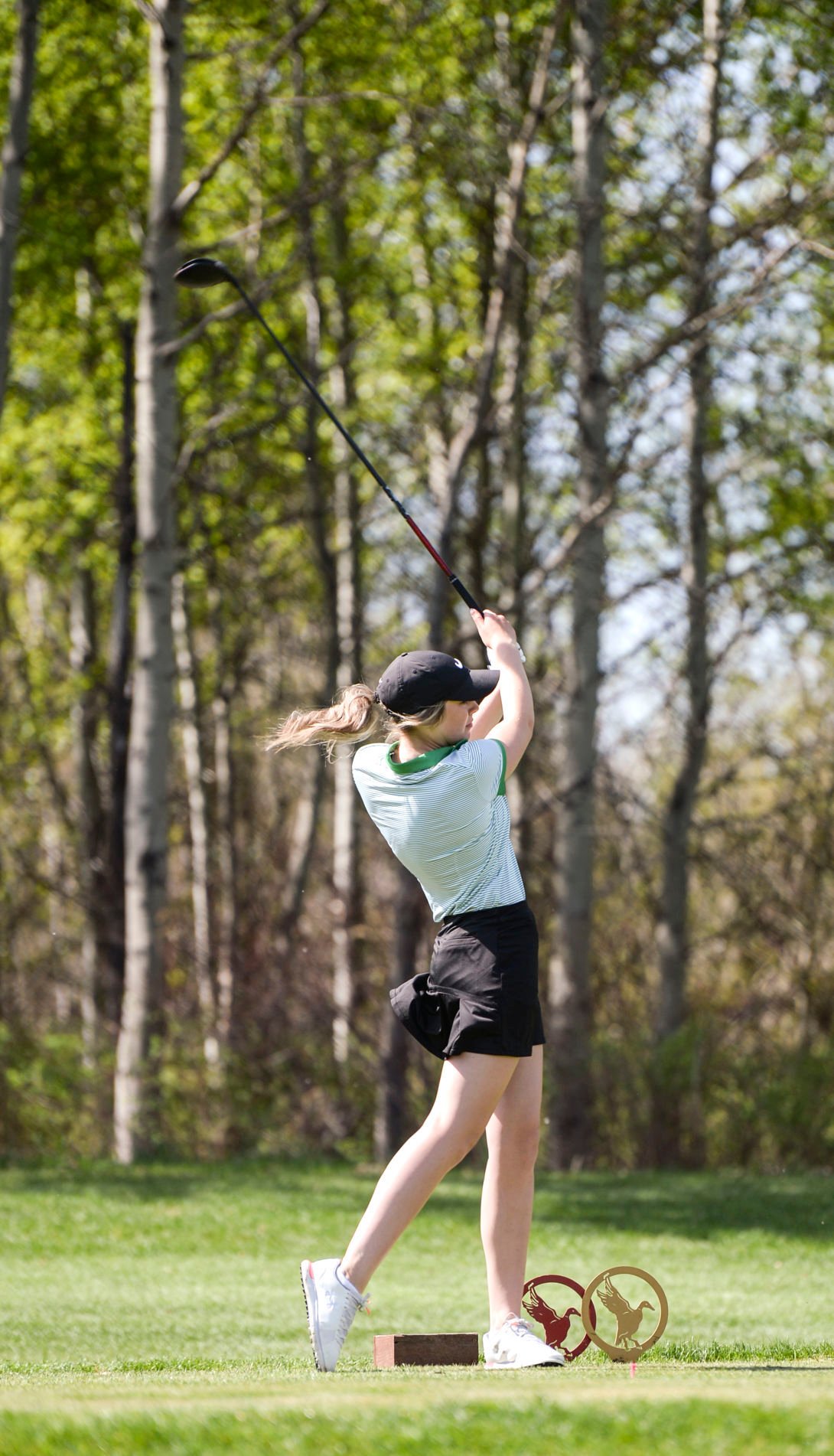 BOZEMAN — As he held his follow-through and dirt fell back to the ground, Caidin Hill instantly knew he had dodged the obstacles in his way. With every moment the ball kept sailing forward, he realized he had done more than that.

On No. 15, his second hit was about 45 yards from the pin. The Manhattan Christian senior’s back swing was within reach of a tree. He needed to shoot below branches yet over a mound to even reach the hole. He then had to account for a break from left to right on the green.

Hill pulled out his sand wedge, only wanting to end up close enough for a single putt. He didn’t need his putter.

“Man,” he recalled, smiling, thinking after he hit his shot. “That could be pretty good.”

His abbreviated swing led to his shot checking up on the putting surface. As it bounced, he walked toward the cup in time to see it hit the pin and drop for an eagle.

This highlighted his 3-under-par back nine and his 1-over 72 to lead the boys’ field during the first day of the Class C state meet Tuesday at Riverside Country Club. He’s on pace to break the 36-hole tournament record of 145 set by Lone Peak’s Tate Totem in 2014.

Hill, a two-time individual champion, powered the Eagles to lead all teams with 228. With Cullen Visser’s 76 and Trevor VanDyken’s 80, Christian is on pace to shoot 456. This would shatter the previous state record of 481 established by Lone Peak in 2014. Seeking its third consecutive title, the record was among Christian’s goals heading into the week.

After his round, Hill figured his teammates wouldn’t be happy with their performances, even knowing the Eagles were likely “easily” in the team lead. When asked if they were overly critical of themselves, Hill laughed.

“That’s possible,” he responded. “But if you don’t demand greatness from yourself, then why would anyone else?”

Though Hill was 4-over on the front nine, he called it “brutal.” He hit fairways off the tee consistently, but his approach shots usually didn’t leave him in range to birdie. He also needed a few up-and-down pars to get by.

Hill’s back nine represented a turnaround. He parred the first three holes. He had a shot at birdie on No. 13, but his putt went about 6 feet past the cup.

He made the par on a breaking putt and gained confidence from there on. A crushed drive on No. 14 and a wedge shot led to a birdie. It was a prelude to his eagle.

Hill felt adrenaline at that point. A birdie putt from the fringe on No. 16 zoomed past the hole, and he missed a 15-foot attempt for par. This was his only bogey on the back 9, as he drove the green on 17 and birdied before parring the final hole. He pointed out his tee shots were critical throughout the round.

“On this course, if you’re hitting fairways and you’re not in tree trouble,” he said, “you can usually score pretty well.”

Visser indeed didn’t feel his 5-over performance was up to his standards. He noted, though, his putting made up for his driving.

He was third behind Westby-Grenora’s Kale Peterson, who carded 74.

Visser added a familiarity with Riverside provided the Eagles an advantage, and they took full advantage.

“It’s kind of cool, as a team, we’re able to play that well,” Visser said. “Even if one of us has a bad day, we’ve got some guys who can help make up some of the ground. It’s super fun. I’ve really enjoyed this year and can’t wait for tomorrow.”

In the individual girls standings, Paityn Curtiss of Plentywood trailed Nordahl with 86. Ennis’ Landri Paladichuk, the state champion in 2019, was third with 88.

Nordahl’s highlight was her eagle during the second half of her round, her first ever. She chipped in from about 25 feet out.

“That was really exciting for me,” she said, “especially at state because I know how big that improved my score.”

Following her round, Nordahl was looking forward to resting and preparing for her second round Wednesday.

“I left a lot of shots out there, but I also had a lot of really good shots,” Nordahl said. “Overall, I think the round went pretty well. … It’s good for a first day.”

Aamot paced the Eagles, who have won the previous three state titles, by shooting 18-over. Christian’s Tori Cook tied for sixth with 97, Natalie Walhof was eighth with 100 and Lindsay Cook tied for 21st with 109.

Aamot emphasized the importance of hitting on target on Riverside’s narrow course littered with trees. She did that off the tee.

“My drives were on today, and they usually aren’t,” Aamot said. “Since it’s a shorter course and it’s really narrow, it’s good when you’re hitting the driver straight.”

Check out the results from the 2021 State C boys and girls tournaments.

Guide to the State B and C golf tournaments

The State B tournament will be played in Billings, and the State C will take place in Bozeman.