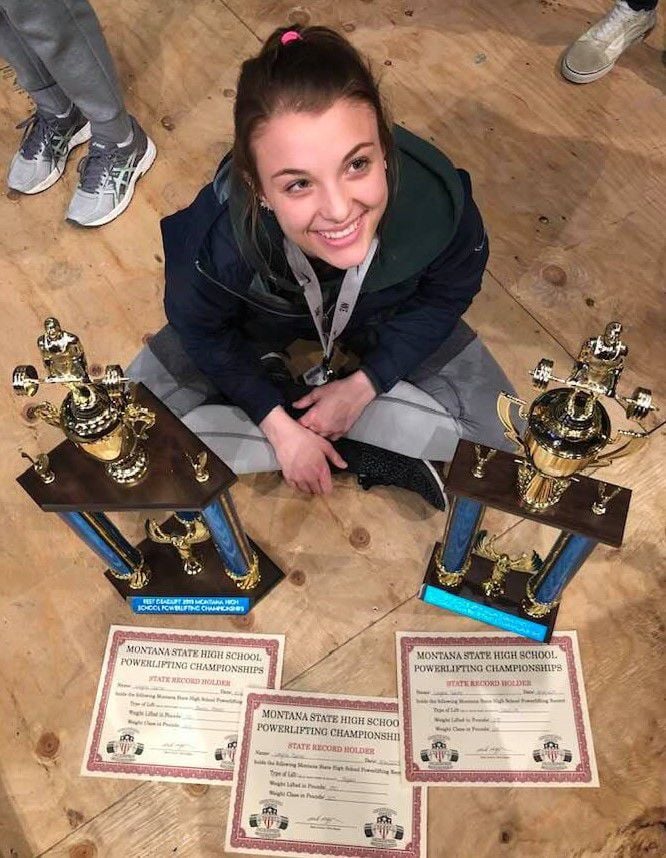 Leigha Carter poses with her trophies and awards afetr the 2019 State powerlifting championships. 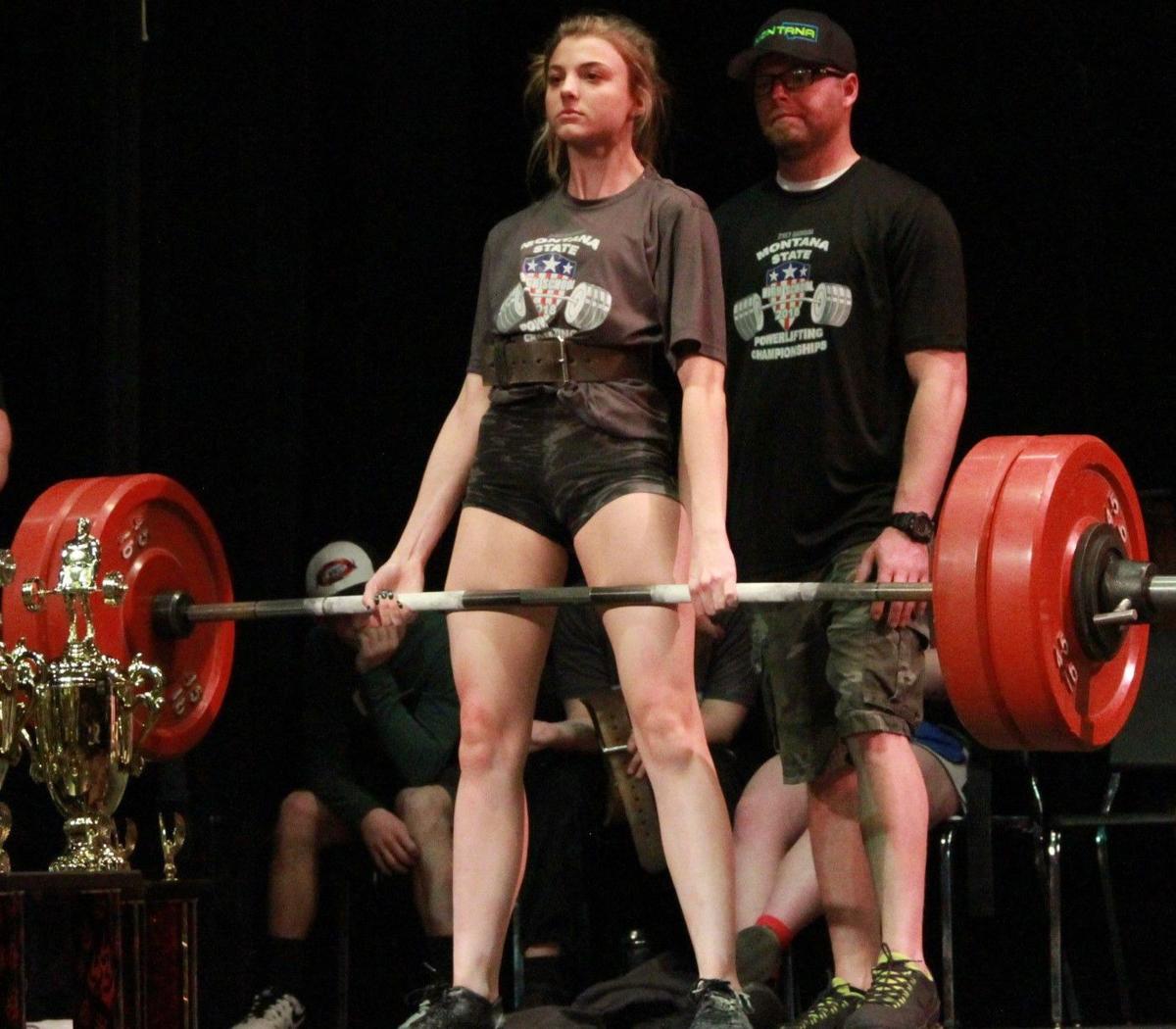 Leigha Carter poses with her trophies and awards afetr the 2019 State powerlifting championships.

HELENA --It’s not often a small community like Helena gets to boast about a world champion, or a world record-holder.

But we have had our share, per capita, and among the contemporary list that comes to mind are Jonathan Matthews (seniors race-walker), Trey Tintinger (youth high jumper), Charlotte Sanddal (super seniors swimmer) and Tom Domme (seniors Spartan competitor).

At the U.S. Powerlifting Association Multi-Ply National Championships and the American Open in Salt Lake City recently, Carter dead-lifted 287.7 pounds in the 16-17 age group, 114-pound weight class. Her lift is officially recognized as a world record in the 114.5-pound class of the 15-19 division by the International Powerlifting League.

The Capital High senior weighs just 107 pounds, and is also the national Full-Power record holder in the 16-17 age group, as authorized by the USPA.

Carter, who has been lifting for only three years, also squatted 185 and bench pressed 95 pounds in SLC, which are both Montana state records.

“I can’t explain how she got so strong, so fast, other than just a combination of work ethic, competitiveness and technique,” said her father and weight lifting coach, Lee Carter. “I can tell you this - I can’t keep her out of the weight room. And she loves all the lifts; cleans, Olympic lifts, Crossfit.”

The elder Carter did not list a fourth component to success – genetics. Back in the day, Lee was a powerful football player for Capital High and Montana State, while Leigha’s mom, Rene’ (Strong) Carter, was an excellent long jumper out of Butte.

And power lifting is not the younger Carter’s only sport.

On the CHS girls’ track team, Leigha is a member of the school-record 400 meter relay unit (with older sister Elena). Last spring, she helped the Lady Bruins to its’ first Western AA title in 22 years, and she placed fifth in the 200 dash at the State Meet. And she runs cross country for the brown-and-gold, as well.

And unlike a few athletes that need a little prodding sometimes, Leigha is the opposite, according to her dad.

“Sometimes she over-works it, and I need to tell her, ‘Hey Leigha, slow it down,’ or once in awhile to actually stop,” Lee related. “You don’t get strong overnight, and she keeps stacking the workouts on top of each other.

“Leigha is fully convinced that weight training has made her faster on the track and in cross country. And she’s ultra-competitive - she thinks second place is the first loser.”

Lee described his daughter as being a “real technician,” having perfect technique.

Sports writers are always speculating. And just for fun, yours truly researched the national womens’ open dead-lift record in the 114-class. According to the USPA web site, that mark is 347.2 pounds, set by Dominique Ocampo, in 2018.

“Leigha does powerlifting because it’s more accessible, with me being in charge of the school program, etcetera,” Lee said. “But it’s possible that eventually when she’s done with track and cross country, she might get into those different lifting events.”

When asked about the Olympics – which currently consists of just the clean&jerk and snatch lifts – Leigha “really hasn’t thought about that” too much.

“I think I might have a lot of work to do before I can start considering something like that,” she said.

1. How often do you lift weights, and how would you describe your training regimen?

Carter: I usually lift all weekdays and take either Saturday or Sunday off to rest. I try to go between having a hard week every other week just so I don’t over-do it on my body, because I often have practices for other sports like track or cross country the same day. I usually go heavier with less reps for a harder week, and light weight with more reps for the easier week.

Carter: My Dad’s weight training class, and I really like any art class I’ve ever had. My Dad’s my favorite teacher, and my GPA is about a 3.7

3. What does your weekly schedule look like, as for which daily exercises?

Carter: Monday is usually chest day, normal bench press and close grip bench, and dumbbell flies, triceps and shoulders. Tuesday is lower body squat, front squat, weighted lunges, and single leg box squats. Wednesday is usually a clean day where I do floor cleans, hang cleans and deep cleans. Plus box jumps and pull-ups. On Thursday, I do a back and hamstring type day, with normal dead-lifts and Roman dead lifts. I also do rows more for my upper back and then a little hamstring focused thing. Friday is cardio day or chest day again. I like to get a run in, and I also try to get a quick core workout in at the end of most of my workouts.

4. What are some of your hobbies, away from sports?

Carter: I’ve always really been into art, ever since I was a kid, I love doing drawings. And hiking … doing anything outside. I just go and hike wherever.

5. What is your next goal in weight lifting?

Carter: I want to break my record again. I really think I am gonna hit 300 soon. I don’t really know how much I can really get in the three lifts it kinda depends on how confident I am that day.