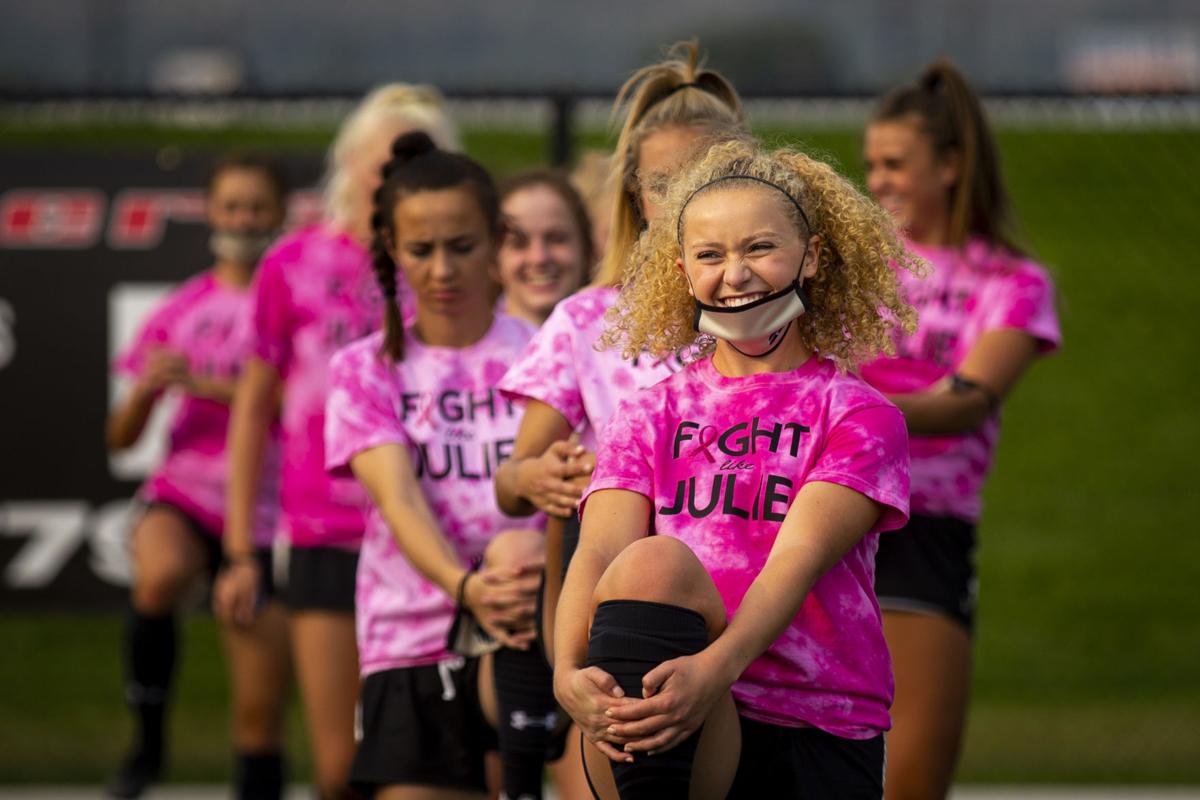 Billings West's Avery Kimmel wears a Fight Like Julie T-shirt as she stretches with her teammates before a match against Billings Senior Tuesday at Amend Park. The shirts were gifts to the Golden Bears from the Senior team to honor the mother of West's Sophie Sievertsen, who is battling breast cancer. 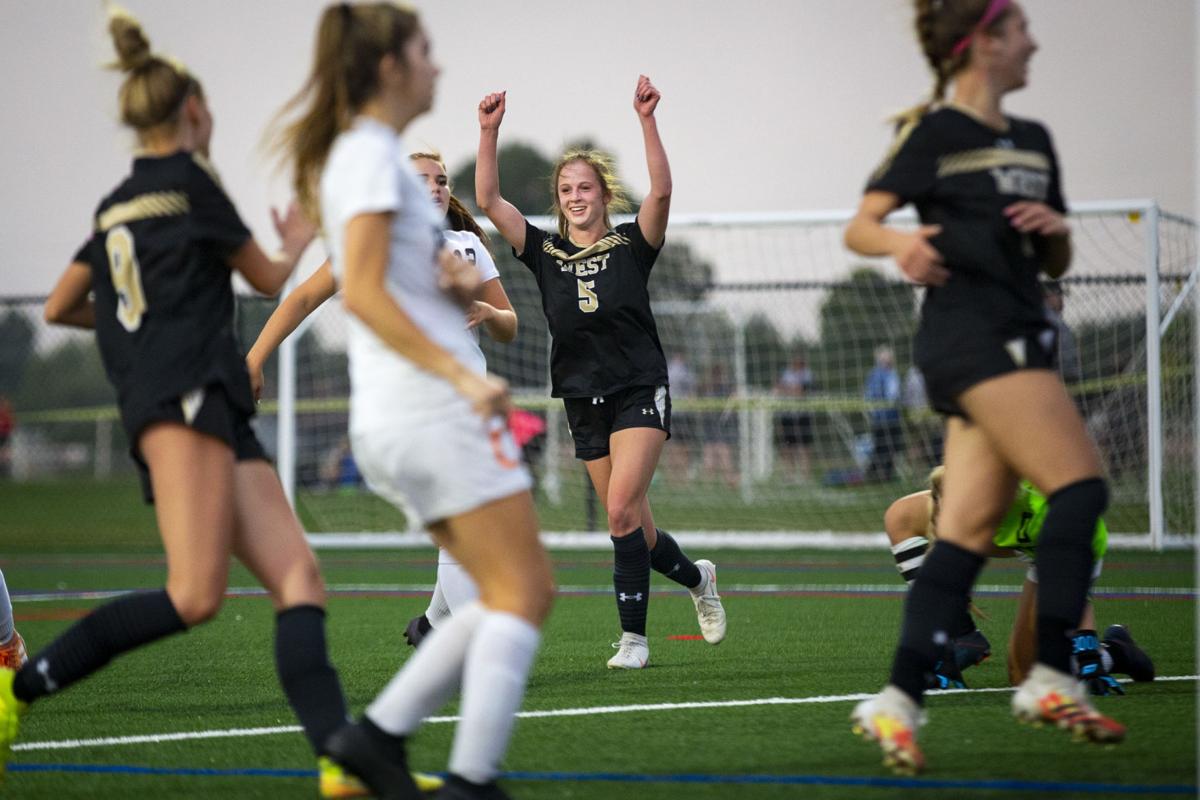 Billings West's Chloe Davies celebrates after scoring a goal against Billings Senior Tuesday at Amend Park. Davies had two goals and Mary Speare scored three in a 5-0 win for the Golden Bears.

Billings West's Avery Kimmel wears a Fight Like Julie T-shirt as she stretches with her teammates before a match against Billings Senior Tuesday at Amend Park. The shirts were gifts to the Golden Bears from the Senior team to honor the mother of West's Sophie Sievertsen, who is battling breast cancer.

Billings West's Chloe Davies celebrates after scoring a goal against Billings Senior Tuesday at Amend Park. Davies had two goals and Mary Speare scored three in a 5-0 win for the Golden Bears.

BILLINGS — The Billings Senior girls soccer team came out on the losing end Tuesday evening and yet the Broncs showed what winning means.

Prior to kickoff against intra-city rival Billings West at Amend Park, the Broncs passed out pink tie-dyed T-shirts emblazoned with the phrase “Fight Like Julie” to the Golden Bears’ players and coaches.

Julie is the mother of West’s Sophie Sievertsen, a dangerous goal-scorer for the Bears and, in effect, one of the Broncs’ main nemeses.

Except on this night. The Broncs wanted to show their support to Sophie and the Sievertsen family: Julie is fighting against breast cancer, having been diagnosed two months ago. Sophie said her mom is one chemotherapy treatment away from starting the next round.

Before each of her team’s matches, Senior coach Cheez Keehn has her players dedicate their play to someone in their life, and write that person’s name on athletic tape on their wrists.

This time, Keehn decided to go bigger. Thus, the shirts.

Senior players and parents bought and tie-dyed the tees and Ceci Bentler, one of the Senior parents whose daughter Eliza is one of Sopie’s good friends, got the “Fight Like Julie” treatments printed and ironed onto them.

Sophie, a junior, has many friends on the area’s opposing high school teams, linked together by club soccer experiences.

“It’s the cool thing about the sports community,” said Keehn, who is in her second season at Senior. “It’s not always about whether you’re rivals and you have to hate each other. No, you can come together for these things. We wanted to teach our girls how cool it is to be there for somebody who is in need.”

That was the message sent, and it was the message received. Sophie Sievertsen nor her West teammates had any inkling the shirts were in the works. Players from both teams wore them during warm-ups.

“It was a very big deal to me, it meant a lot to me,” Sophie said. “It was great to see that so many people care and that we’re all a family. It’s a big deal to know that we have so much support and that everyone’s there for us.”

“Even though we’re crosstown rivals and for 80 minutes twice a year we don’t like each other that much and we’re out for blood, the rest of the time we can be friends and support each other and be there for each other,” West coach Rob Zimmerman said. “It was a great gesture.”

Of course, the goodwill didn’t extend to the match. Sievertsen, who helped control the midfield for the defending Class AA champion Bears, admitted it was tough at first to get her focus back on the match after the emotional opening.

But even without leading goal-scorer Emma Lensing, who has missed the past four matches with a foot injury, the Bears (6-0-2) got a hat trick from Mary Speare and two goals from Chloe Davies for a 5-0 win over the Broncs (4-5-0).

As if this intra-city matchup needed any more drama, the Broncs went down to 10 players with 30 minutes remaining after Trey Draayer and West keeper Dillon Haff collided in front of the Bears’ goal.

Haff had to be helped off the field with a leg injury and Draayer was shown a red card, leaving Senior to play a man down and the Bears to play with a new keeper in Kasey Meier.

But rather than go into a shell, the Broncs maintained their aggressive approach. And though they tested Meier on more than a couple occasions, Meier was up to the task. As was Senior keeper Tyson Boller, who recorded the Broncs’ eighth clean sheet in nine games in relief of regular keeper Biel Cantera Potente, who was out for the match.

The resulting 0-0 draw left both sides feeling somewhat satisfied: West, because it was an improvement over an earlier 6-0 loss to the Broncs; and Senior, which earned a point despite dire circumstances.

“It’s great for us to have to deal with some adversity, adversity that we obviously created by going down a man,” Senior coach Zach Robbins said. “But our response after that was fantastic. We still had multiple chances after that.”

Senior remained unbeaten at 7-0-2 but missed a chance to move further ahead of Bozeman (6-1-0) for first place in the Eastern AA. West went to 3-3-2 and picked up at least a point for the fourth match in a row.

“Going down to 10 men it was a lot more individual work (for Senior) but they didn’t let it affect them,” West coach Luke Ashmore said. “For us, it kind of opened up the game for our attacking channels. We found some good shots at the end, we just have to get one to fall. Overall, I’m happy with the point. It’s a good point.”

The girls battled to a 1-1 tie, and the boys’ programs followed and played to a 0-0 draw.