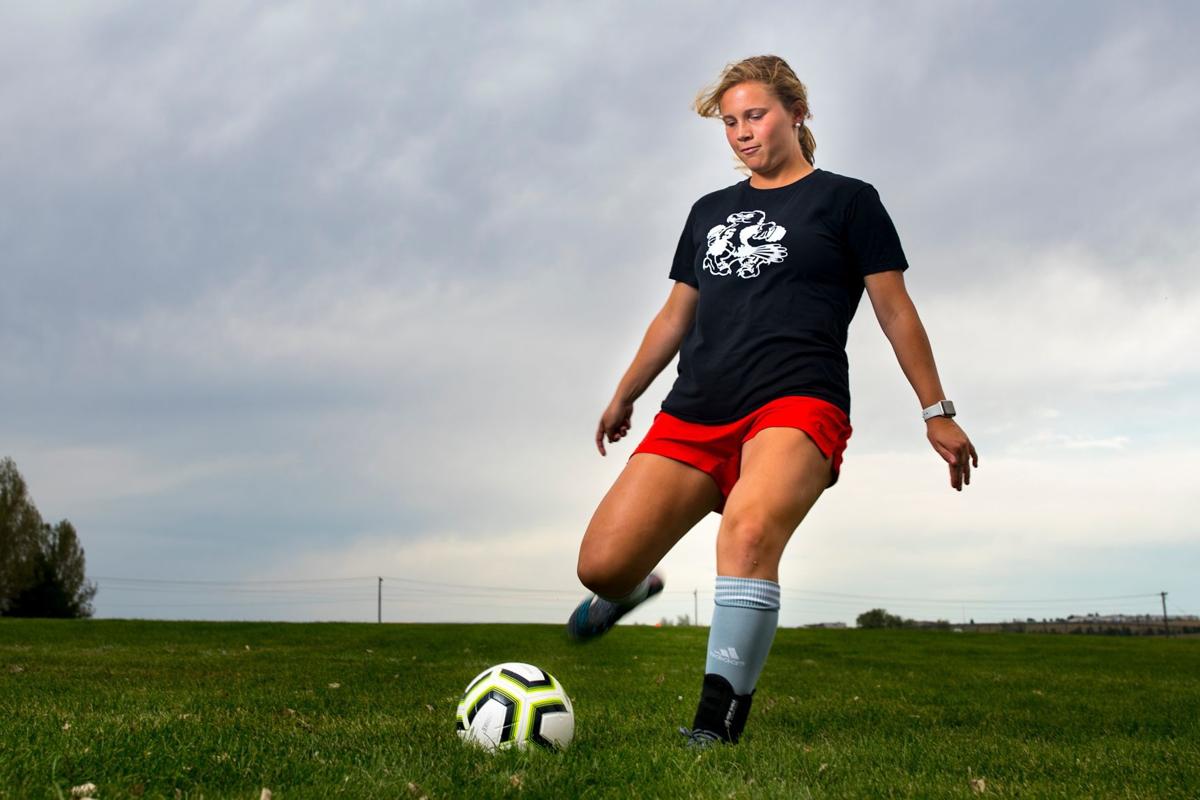 Billings Skyview's Jordan Roe is the reigning Montana Gatorade Player of the Year and a two-time all-state selection. 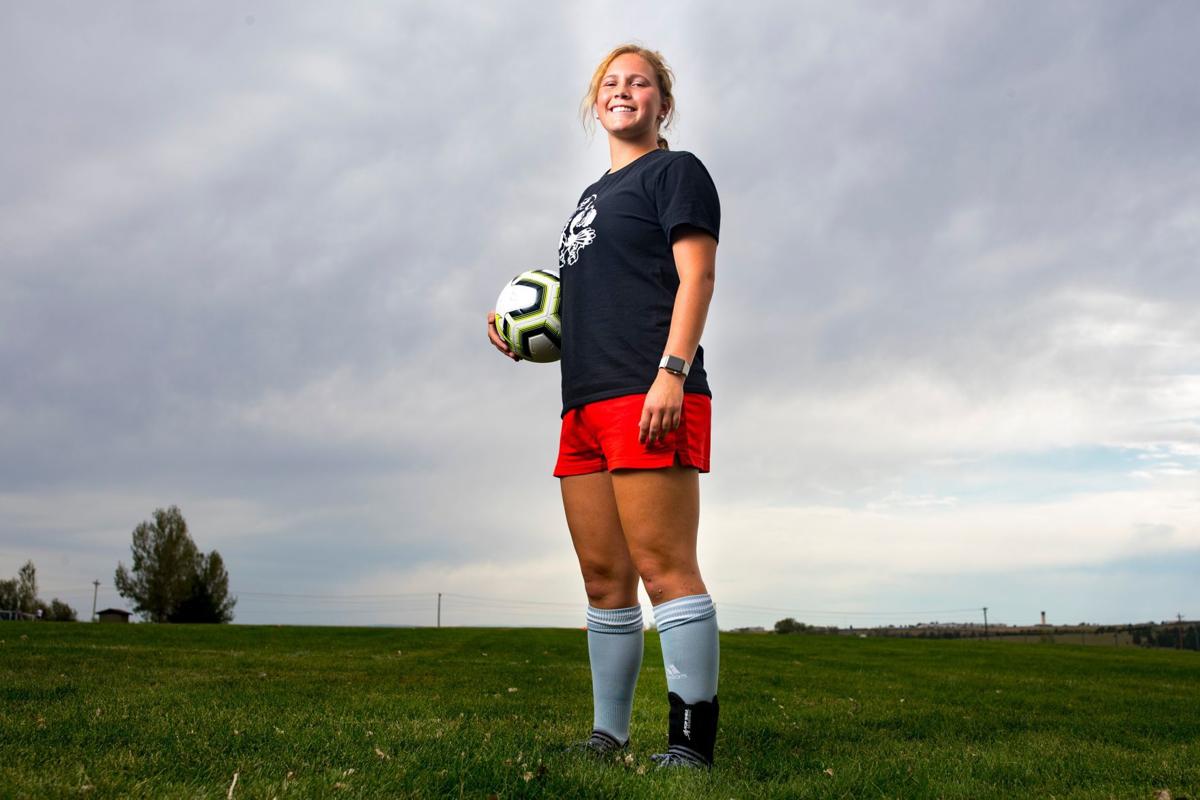 Jordan Roe poses for a portrait at High Sierra Park in Billings on Thursday.

Billings Skyview's Jordan Roe is the reigning Montana Gatorade Player of the Year and a two-time all-state selection.

Jordan Roe poses for a portrait at High Sierra Park in Billings on Thursday.

BILLINGS — Still recovering from a severe ankle injury, Jordan Roe understands her playing time might be limited in early matches.

Roe doesn’t care. Her view is a little more long-sighted.

“The angle is to be playing fully healthy at the end of the season,” she said.

It’s the end of the season where state championships are won.

Roe has the same attitude with her numbers. A year ago, the savvy Billings Skyview forward picked apart opponents for 21 goals and a Class AA-record 20 assists.

“Her strength would definitely be her intelligence as a player. She knows where to take the ball regardless of the situation,” said Cameron Icenoggle, the Falcons’ head coach.

But numbers are not Roe’s primary concern.

“Just the winning,” said the reigning Montana Gatorade Player of the Year and two-time all-state selection. “It doesn’t matter how we win. I just want to win. They (goals and assists) come during the game. If you set numbers as a goal, you start being selfish and hurt the team.

“Honestly, it doesn’t matter to me about scoring or passing. It’s important to win the game.”

And win Roe and her Falcon teammates did.

The uber-competitive Roe — “I don’t like losing anything,” she said — was the catalyst for a Skyview girls soccer team that finished 15-0, culminating with an easy 6-0 win over Missoula Big Sky for the program’s first state championship. Roe had two goals and an assist in the title match.

“I just remember the fun we had,” said Roe of the 2018 breakthrough season. “We had great team chemistry. It was just super fun.

“Maybe we were having fun because we were winning.”

With a core of seven seniors — five who have been playing together since the age of seven — the Falcons were back training just a few days after holding the state championship trophy.

Wanting to focus on improving her footwork and increasing her percentage of shots made, Roe’s off-season stalled when she dislocated her left ankle earlier this winter. She also broke three bones and tore some tendons.

“I just planted and felt like I was stuck,” Roe recalled. “I didn’t cry. I was probably in shock.”

She had surgery the next day and was in a cast for two weeks, on crutches, followed by six weeks in a walking boot. Roe finally shed the boot in late July.

“I was very frustrated when it happened,” said Roe. “It (rehabilitation) was about a 10-week process.”

And with her father Robert a physical therapist, there were no shortcuts. “He said, ‘You have to do it right,’ " said the daughter.

“I probably cheated a little bit with my crutches,” she finished with a laugh.

Part of a surgery included a re-adjustment of the ankle, which has left her with Achilles’ tendon issues. “It’s super tight,” Roe said. “I have to do a lot of stretching.”

To keep an athletic edge, Roe continued upper-body work and some one-on-one drill sessions with Icenoggle.

“Once she got her boot off, she was juggling a soccer ball around the weight room,” he said. “Jordan is constantly looking to get better, to reach a new height.”

Roe said the competitive passion on the soccer pitch began around the age of 12 and has continued since. “I don’t like not being good at something,” she said.

And that competitiveness might also be genetic. Family board games, which include older brother Paxton and older sister Justine, along with younger sister Ava, could get unruly.

She also had a confession about family card games.

“I’m not allowed to play. When I was young, they caught me cheating,” she added with another smile.

Keeping her college options open, Roe is leaning toward being a nurse anesthetist. “I like watching surgery, not doing it,” she said. She carries a weighted 4.17 grade point average on a 4.0 scale.

A peer tutor for special education students, she has also worked with Special Olympics, coaching a youth soccer team.

“It was super fun,” Roe said of working with players ages 6 to 10. She told the story of walking along setting up cones for a drill, only to have a player walking behind her picking them up.

“And it taught me patience,” she said.

Now she will use that patience as her senior season begins and the Falcons defend their title.

“I think I might be playing less minutes or until I signal coach Cam I need to come out,” Roe said. “I just need to take the minutes I get and do something with them.

“Obviously, I want to win another state championship. For me personally, it’s to get healthy. I’m not 100 percent yet. I need to be heading the right way at the end.”

This is the third in a nine-part series profiling some of the state's top athletes as the 2019 fall sports season begins.

CHICAGO — Billings Skyview junior Jordan Roe has been honored as the 2018-19 Gatorade Montana Girls Soccer Player of the Year, The Gatorade Co…