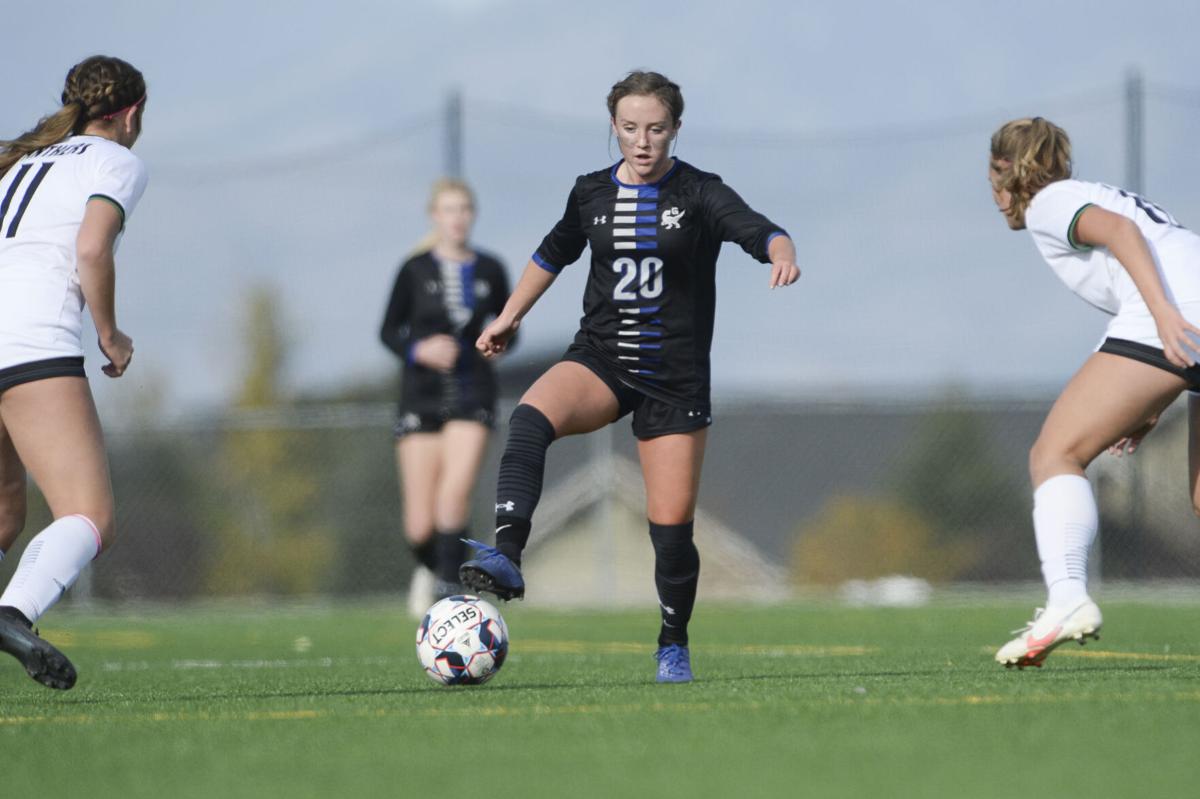 Gallatin’s Natalie Sippos plans her next move during a game against Belgrade at Bozeman Sports Park on Oct. 19. 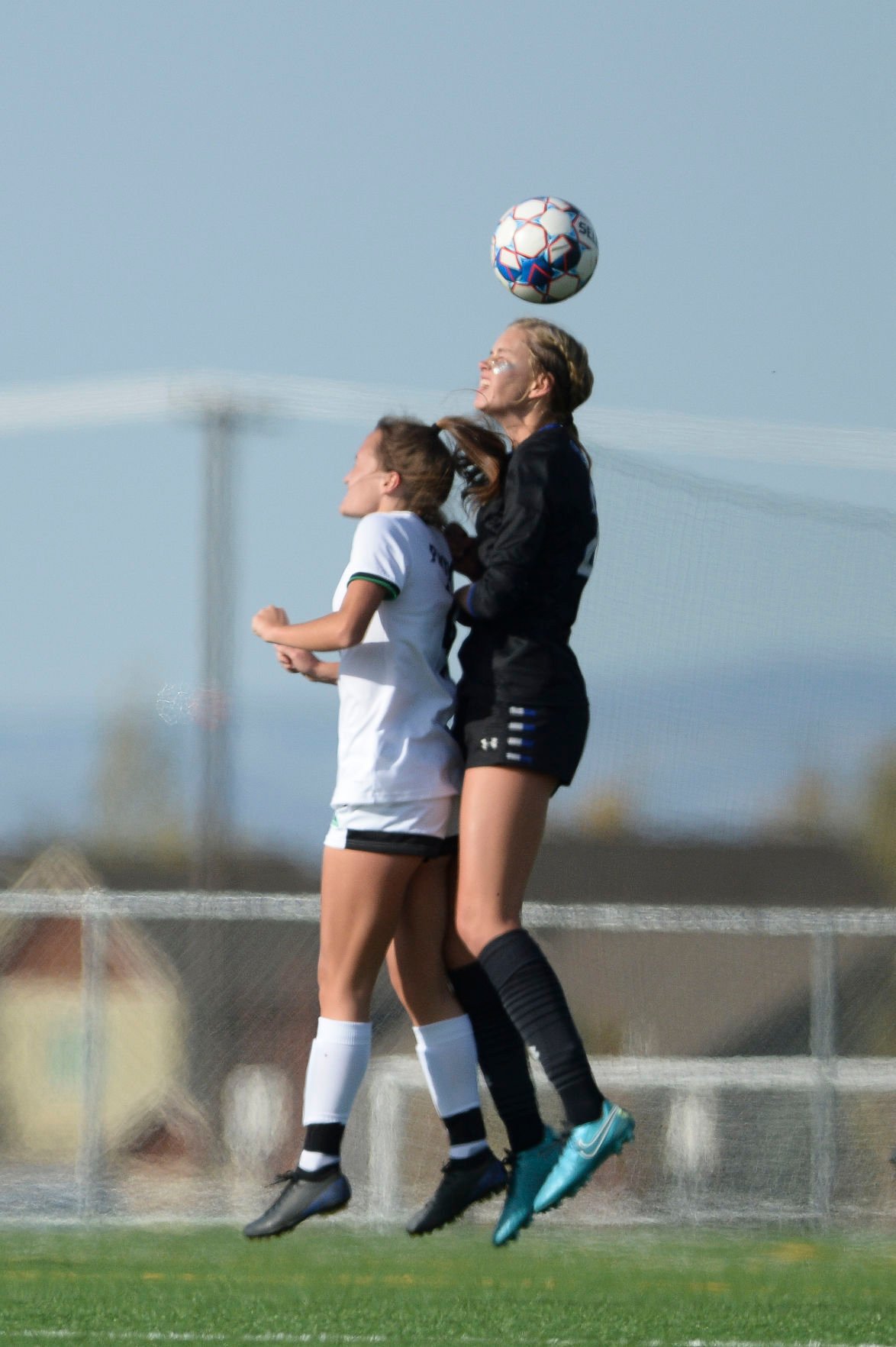 Gallatin’s Natalie Sippos plans her next move during a game against Belgrade at Bozeman Sports Park on Oct. 19.

BOZEMAN — From the beginning of the season, Bozeman Gallatin just hoped to be in a position to win a playoff game.

The Raptors have achieved that and then some in just their second season as a program.

Even before the school opened, Raptors head coach Joel Ganey remembers Zoom calls with prospective members of the team who outlined their vision for Gallatin soccer. The players expected to compete hard, to act with integrity and good character and to be bold and daring on the field.

“I think they have continued to do that and live up to that from our very first practice until now,” Ganey said. “It's not super surprising to me that they've been successful because they set out to do so, and they've accomplished it.”

The Raptors followed a 6-6-1 regular season in 2020 with a 9-1-4 mark in 2021, earning them the Eastern AA’s second playoff seed. After postseason wins against Belgrade, Missoula Sentinel and Helena, the Raptors (12-1-4) are set to face Billings West, the Eastern AA’s top seed, at 6 p.m. Friday in the state championship game at Amend Park in Billings.

“It feels amazing,” Ganey said of being in a position to win a title. “We’ve worked so hard all season. Every week we’d add something else we are working on to try and improve.”

The Golden Bears tied with Helena for the top record in Class AA this regular season at 12-0-2. The Raptors handed the Bengals their first loss in the semifinals, and they will look to do the same against West (15-0-2) in the championship.

The Bears may be without a loss this season, but their two ties both came against Gallatin: a scoreless contest to open the schedule and a 1-1 game on Sept. 23. In fact, Olivia Collins’ goal in that game was just one of three West has allowed all season. Bozeman’s Grace Thum scored against them in the second game of the season, and Missoula Hellgate scored the third goal against the Bears in the semifinals on Tuesday.

“They don't have a lot of weaknesses,” Ganey said. “From top to bottom, all of their players are very good. They're very aggressive and physical and well-organized. The goalkeeper is solid, so it's definitely been tough to break through their goal all season long.”

Collins has been the Eastern AA’s leading scorer all year — she’s up to 19 goals, with five coming during the playoffs. West boasts a loaded offense also, however, with Emma Lansing and Mary Speare sharing the team lead at 16 goals, while Sophie Sievertsen has 12.

Gallatin’s offense has been spread around as well, with Natalie Sippos (five goals), Indigo Andresen (six) and Caris Follett (six) all finding the net often. Goalkeeper Averi Smith allowed only eight goals in the regular season and has permitted just one in the playoffs.

“I think we match up well with them,” Ganey said. “I think we have a strong midfield, as do they. I think we work hard and are organized and disciplined and aggressive, as are they. I think this makes for a really good, exciting game. I think we definitely can cause them some problems, and we did in the last couple of times we played them, and they caused us problems as well.”

Ganey added that preventing West from finding space to operate in the midfield will be one of Gallatin’s primary keys.

He also credited his team for its dedication and effort this season. The Raptors showed throughout the year they were well-rounded and could compete with anybody.

“You expect a couple players to step up and perform and deliver,” he said, “but I think every player from top to bottom has really helped the team move forward.”

And it’s for that reason Ganey doesn’t think a state championship in Gallatin's second year is that far-fetched.

“It's hard to say, but I think we thought it was on the table,” he said. “I think we thought, ‘Yeah, this is something that we can do.’ We knew it was going to take a lot of hard work, but I do think it was something even back in that first year where we were like, ‘Yeah, we can accomplish this.’”