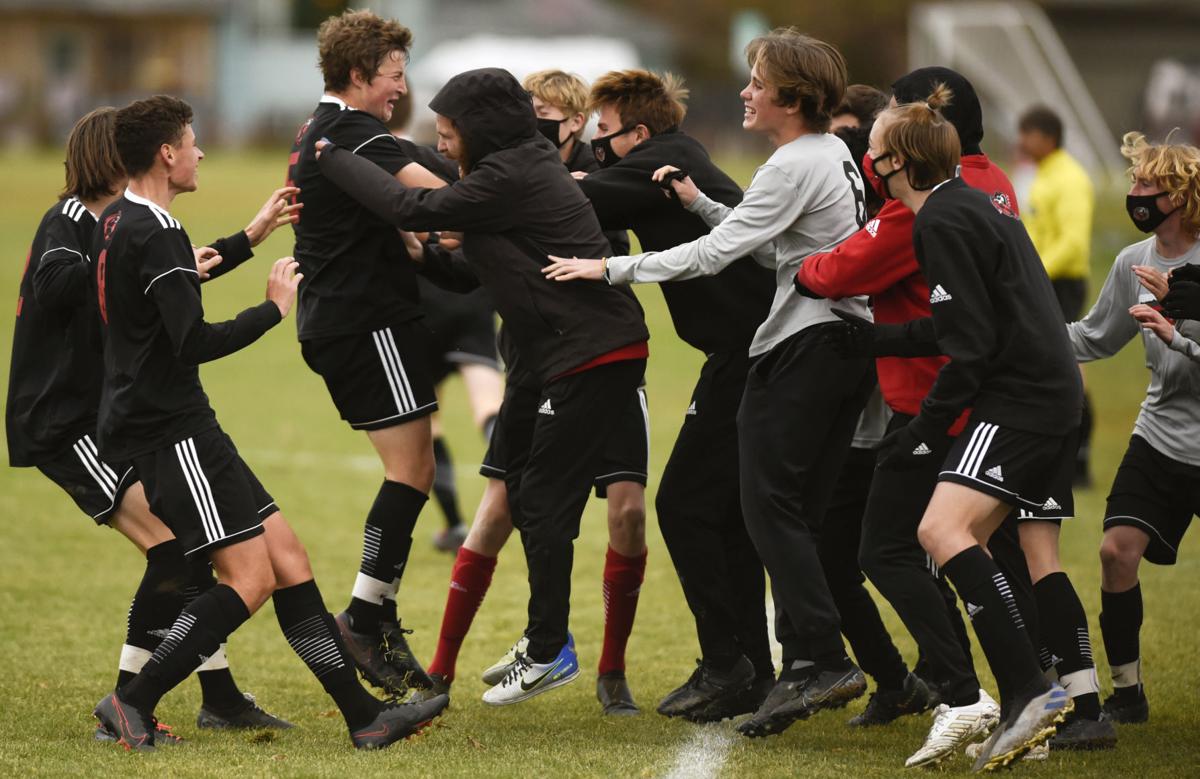 The Hawks celebrate after scoring their first goal during a Class AA semifinal match Tuesday at Bozeman High. 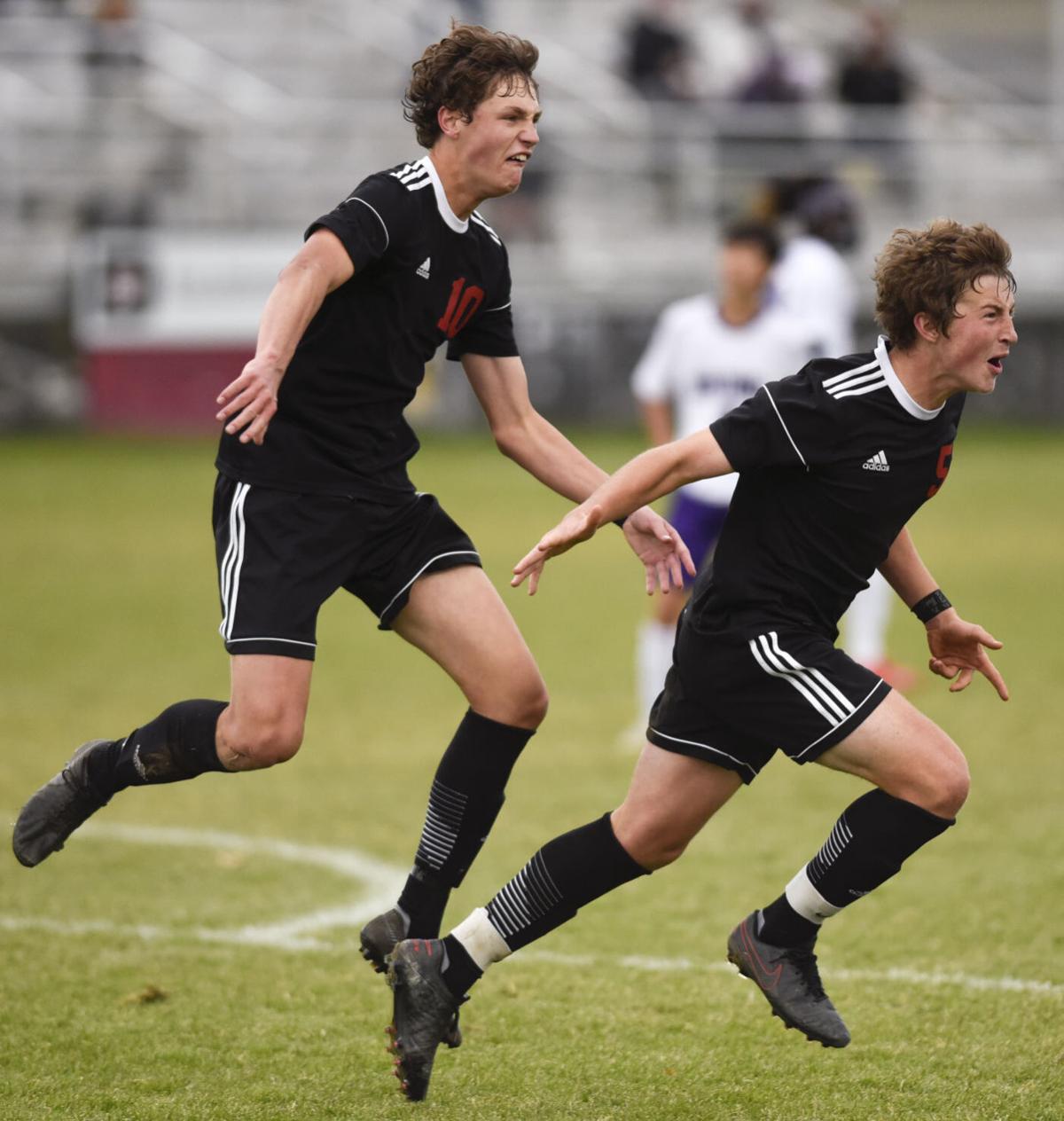 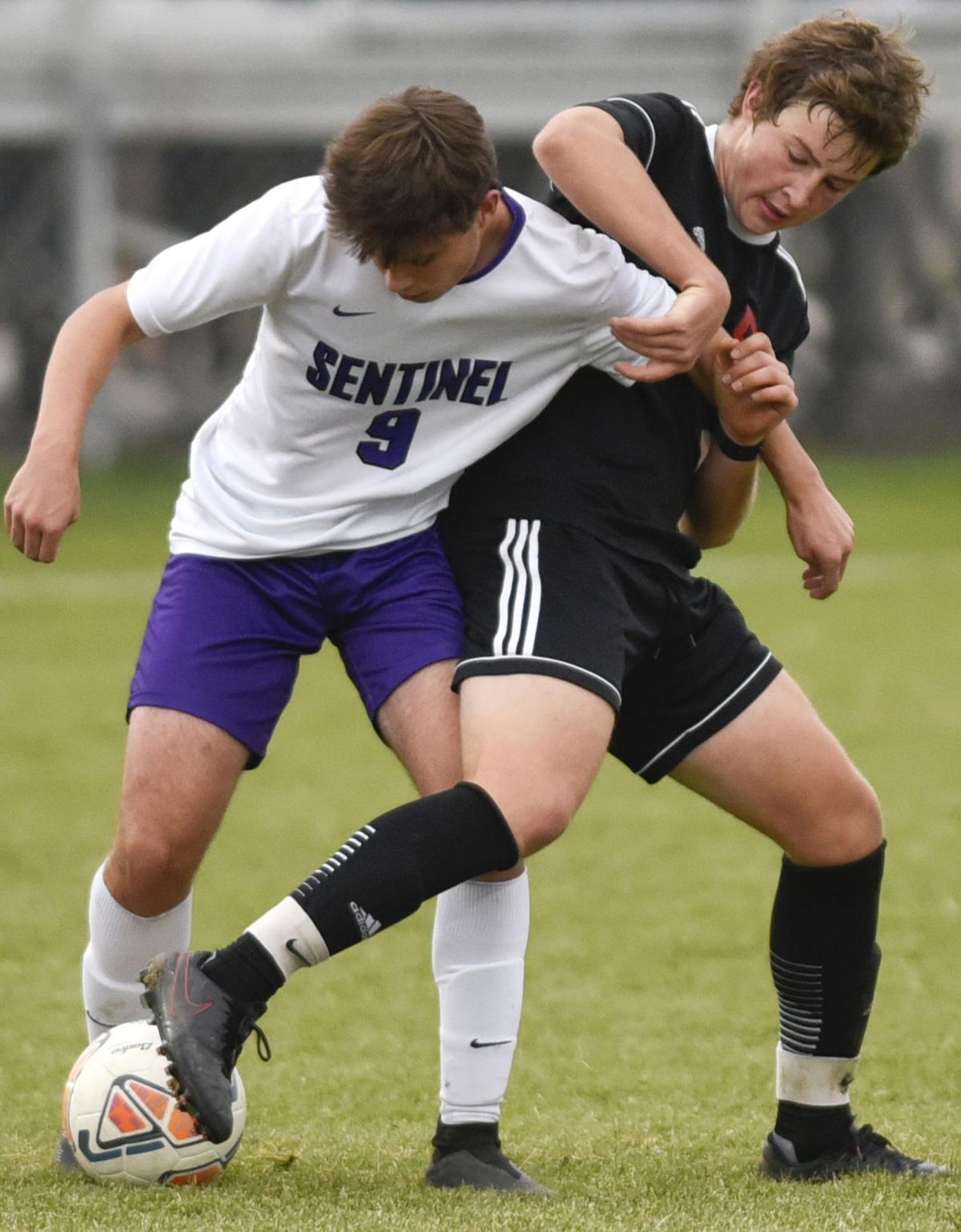 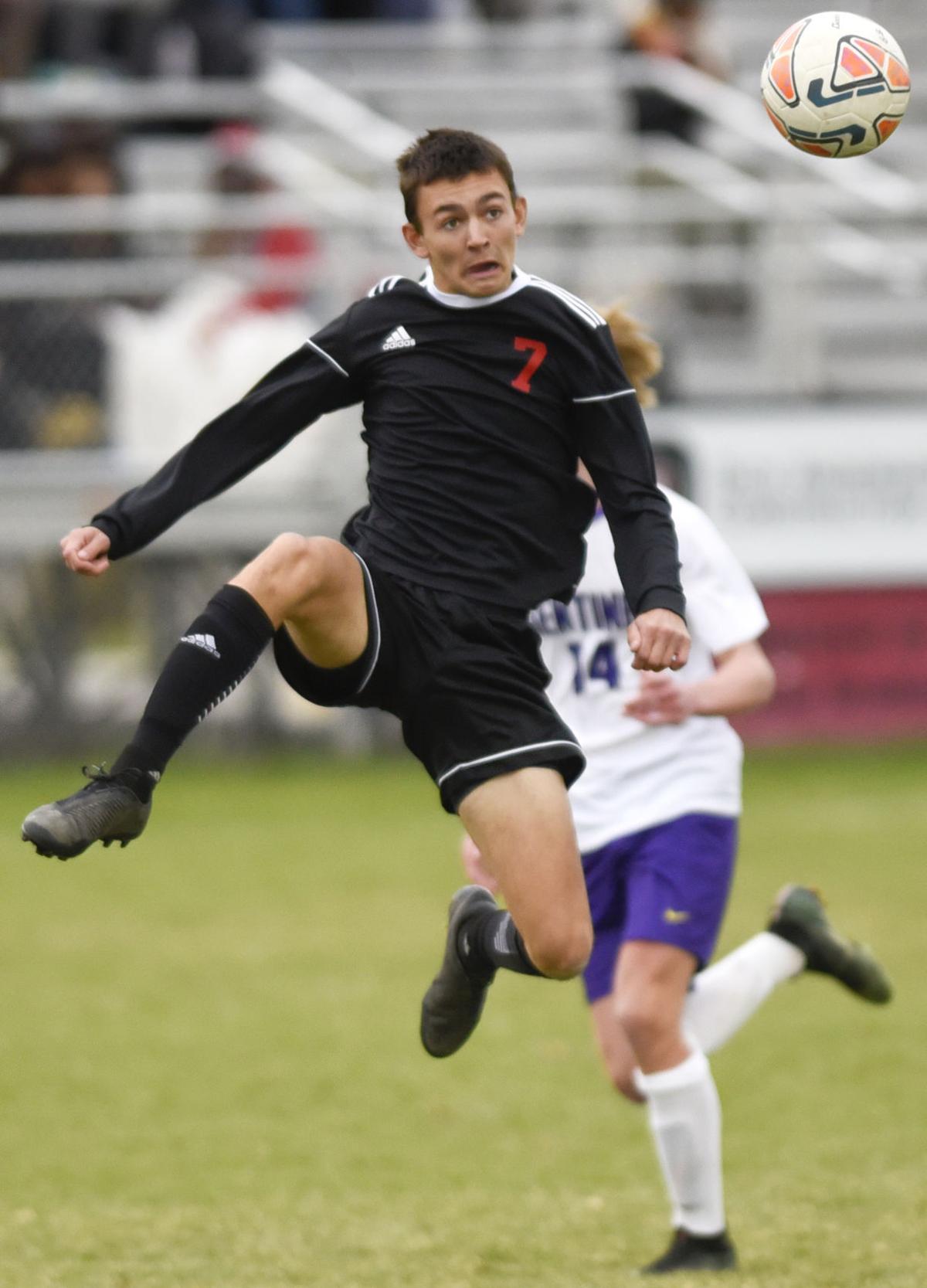 Bozeman junior Joshua Angell jumps up to receive the ball during a Class AA semifinal match Tuesday at Bozeman High. 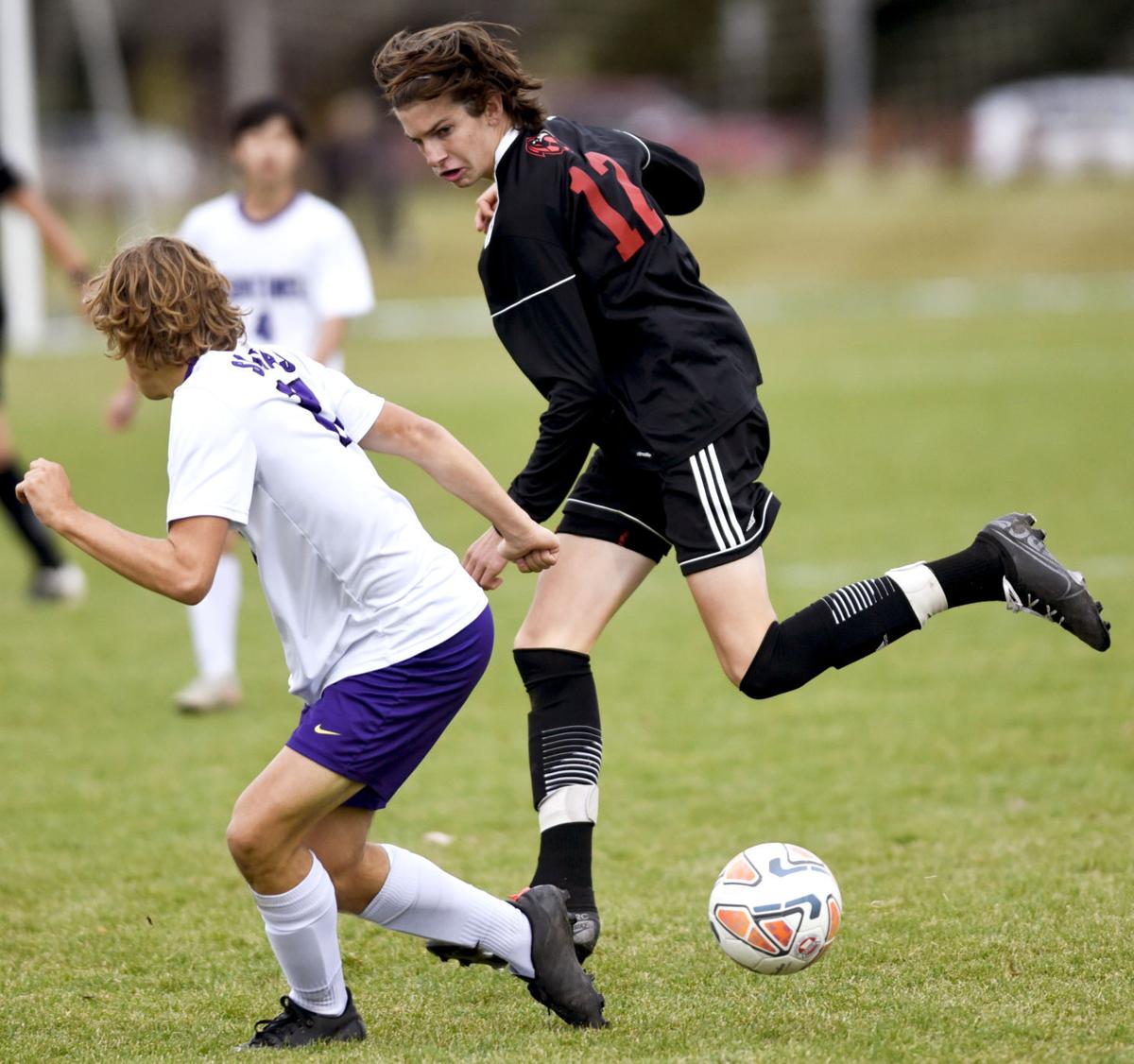 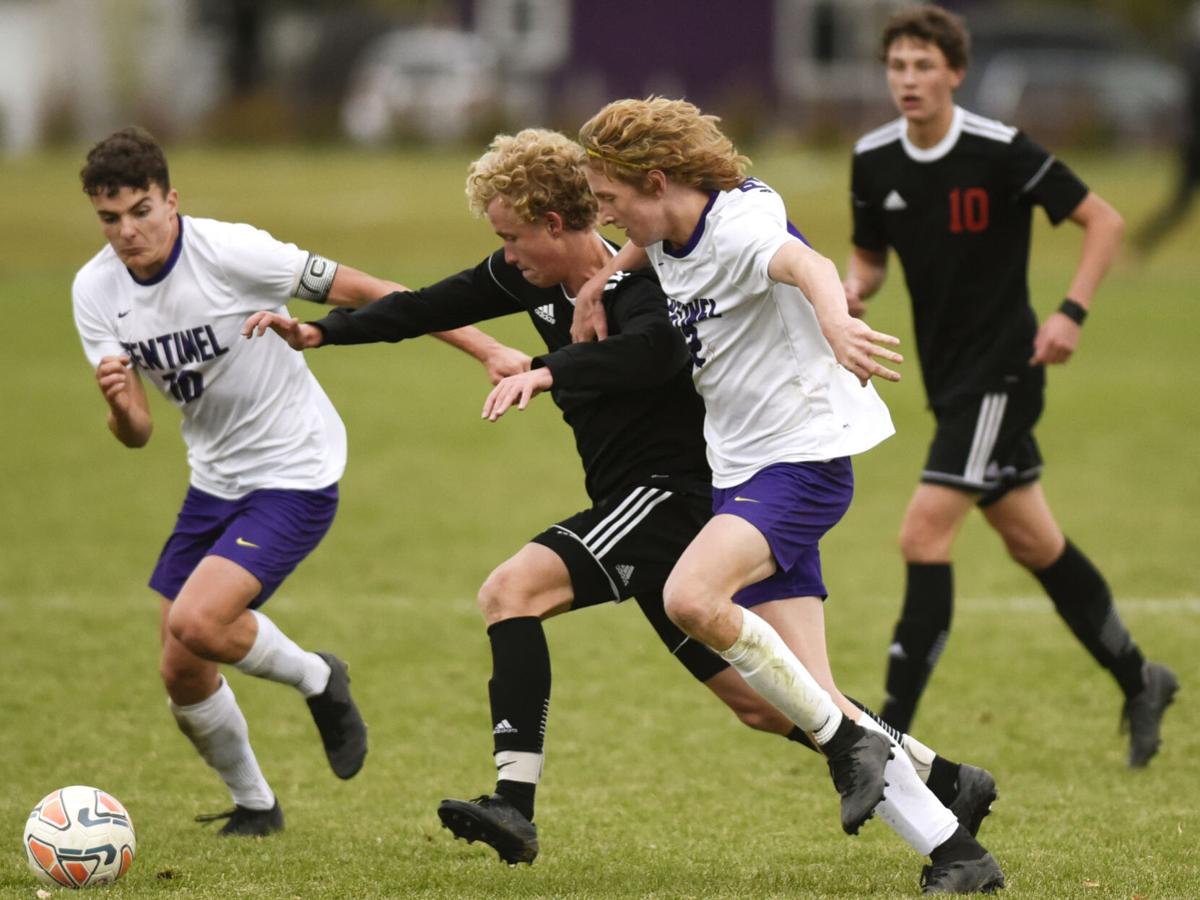 The Hawks celebrate after scoring their first goal during a Class AA semifinal match Tuesday at Bozeman High.

Bozeman junior Joshua Angell jumps up to receive the ball during a Class AA semifinal match Tuesday at Bozeman High.

BOZEMAN — For a full year, Bozeman was forced to find a way to cope with the feeling of losing in the state championship.

The Hawks had won the state title in 2018 and made a run to the finals again, but they lost in a narrow match to Missoula Hellgate.

Ever since, the Hawks have been working tirelessly in the offseason and throughout the last few months to make sure they don’t fall short again. Bozeman is now one more win away from making that effort worthwhile.

The East No. 1-seeded Hawks scored two goals in the second half in a 2-0 shutout victory over West No. 3 Missoula Sentinel on Tuesday at Bozeman High. The Hawks (15-1-1) will host the state championship later this week.

“It feels really good,” Hawks leading scorer Drew Johnson said. “We went into this game knowing it was going to be a battle. I think we stuck through it the whole game, and it feels really good to come out on top.”

Hawks coach Hunter Terry emphasized to his players that they need to stick to their game plan and their style, knowing Sentinel’s potential. The Hawks needed to stay true to who they are, Terry said, which is an aggressive and attack-minded squad.

With that said, the Hawks also needed to capitalize on every scoring chance they had. The first half, though, was scoreless as each team tried to settle in.

Terry pointed out the Hawks didn’t allow Sentinel many opportunities in the back-and-forth opening 20 minutes.

The Hawks were forced to make quick adjustments. At intermission, Terry told his players the Spartans would try to sustain their momentum.

He was right. Terry called out to his players a few minutes into the second half that they needed to be smart. But eventually, Bozeman found a groove.

“We knew if we put some of them away, we’d get a couple goals,” he said. “And that’s what we ended up doing and we shut them out, and it worked out.”

Terry said the Hawks altered how they went about their attack. They wanted to increase the pace of the match and try to put together more breakaways.

That, Terry noted, is how they manufactured more opportunities in the second half.

Samuel Robinson scored first for Bozeman off a free kick. The Hawks finally had the momentum they were seeking.

“I was super excited because it got us the lead,” Robinson said. “I ran over to the team to start celebrating. It was crazy. It’s probably the greatest feeling I’ve ever had in my life. Beyond grateful for my team. It’s all because we’ve been working hard.”

Later in the second half, Johnson tallied his goal to increase the lead. The Spartans had tried to focus on Johnson in hopes of containing him, but Bozeman couldn’t be slowed down.

After his goal, the Hawks gathered as a group to celebrate. The noisy crowd cheered.

Bozeman wouldn’t be prevented from advancing in the state tournament.

“We’ve been working this whole season to win state,” Johnson said with a smile, “and every step along the way getting there feels really good. We’ve still got one more game, but it feels pretty good.”

The Hawks have only lost one match and tied another all season, both against Billings Senior. Their loss is the only time they’ve been shut out this year.

Bozeman’s defensive effort, as illustrated Tuesday, has been crucial. The Hawks blanked opponents nine times during the regular season. They’ve now shut out opposing teams in two of their three playoff matches as well and have allowed just two goals all postseason.

The Hawks hope to maintain this pace headed into the state championship. Bozeman players, though, are confident.

“Nothing is going to be easy,” Terry said. “We’re going to have to work really, really hard and earn every inch we can get.”