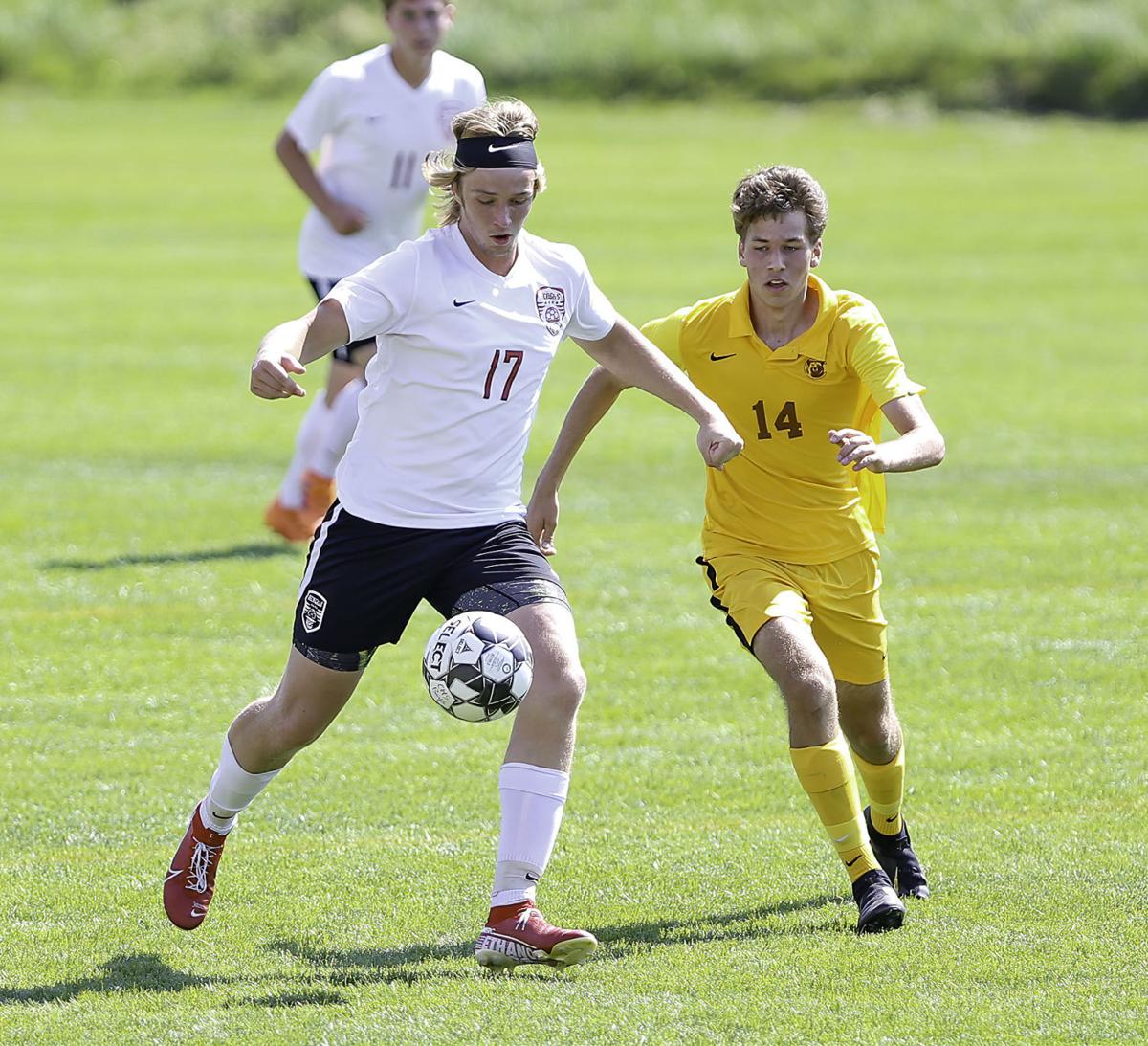 Ethan Hayes of Helena High and Nathan Adamek of Capital fight for a ball during the first crosstown matchup in August. The rematch is Thursday at Nelson Stadium. 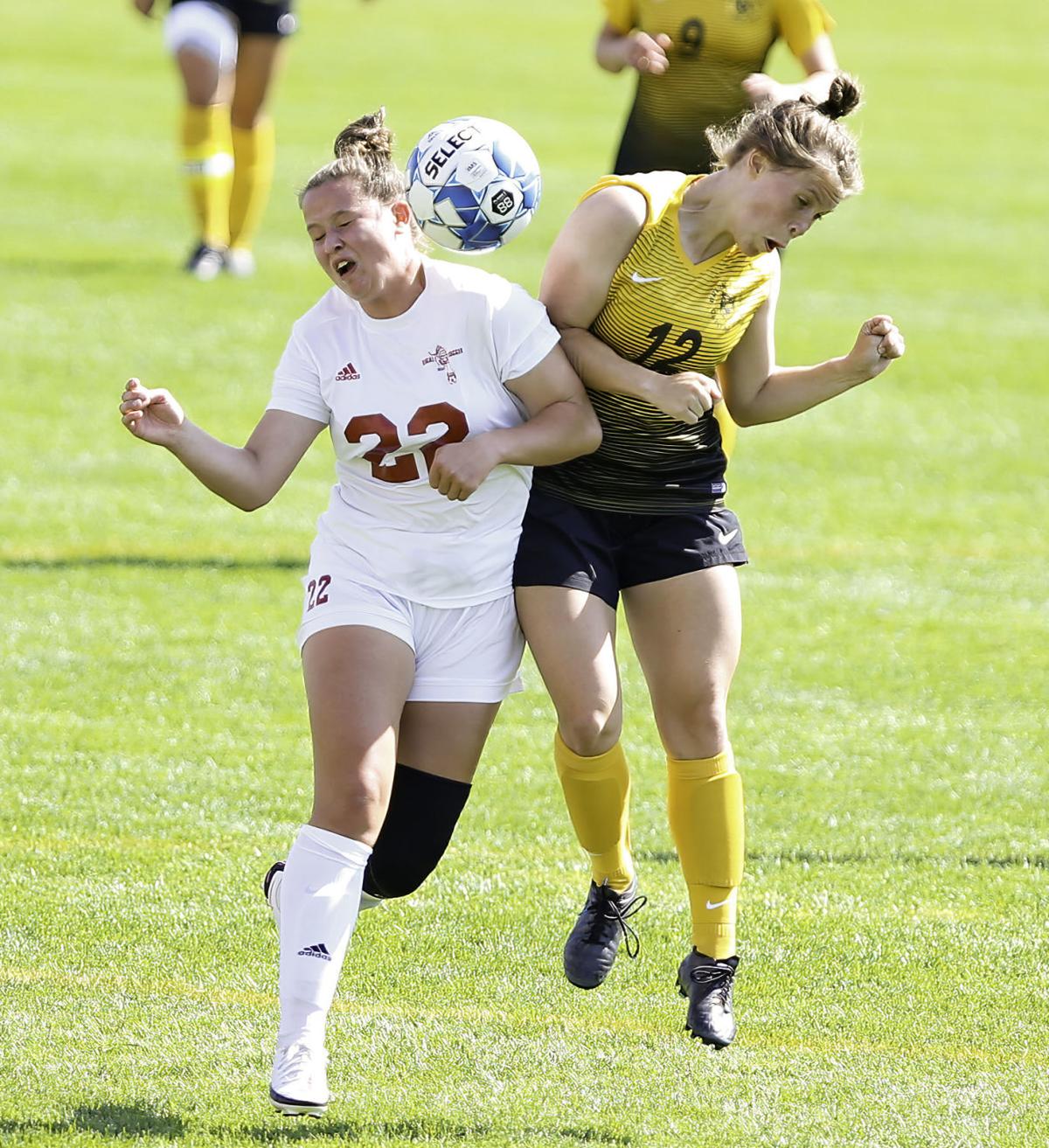 Elsa Grebenc of Helena High, pictured left, battles Paige Davidson for a ball in the air in the first crosstown game this season between Helena and Capital.

Ethan Hayes of Helena High and Nathan Adamek of Capital fight for a ball during the first crosstown matchup in August. The rematch is Thursday at Nelson Stadium.

Elsa Grebenc of Helena High, pictured left, battles Paige Davidson for a ball in the air in the first crosstown game this season between Helena and Capital.

And Thursday, for the second time in less than a month, the Bruins and Bengals will meet for a crosstown soccer doubleheader at Nelson Stadium.

The girls match will start things off at 3 p.m. and will be followed by the boys contest at 5 p.m.

"Everybody wants to win crosstown," Capital boys head coach Stefan Wall said. "But the expectations at Capital and Helena High are that we want to win every match. Points are on the table so each team wants to get three."

In the first meeting this season, on the boys side of things, the Bruins and Bengals each had to settle for a point each, following a 1-1 draw.

Since then, the Bengals have won twice, with a tie and a loss. Capital, on the other hand, has won twice and lost twice, leaving the Bruins a point behind Helena in the Western AA standings for fourth. Missoula Hellgate leads with 21, followed by Kalispell Glacier with 13 and Missoula Sentinel nine.

"For us, this is about trying to take the next step in how we play the game," Wall said. "Helena High is much improved from the first match and a much different challenge."

Right now, Helena is one of four teams in the West with a positive goal differential. They will be led by Dylan Maharg in net, as well as Jacob Demmons who has five goals in five matches. Ethan Hayes also comes in with two goals and two assists.

For Capital, Henry Lauerman will be in net and the leading goal scorer for the Bruins is Eli Voss, who comes in with two.

In the girls match, Helena will seek another win over the Bruins after taking the last three matches by the score of 3-0. Capital hasn't scored on the Bengals since 2018.

Through five matches, the Bengal girls have been dominant, scoring 18 goals and allowing just four. Right now, with 12 points, they trail only Kalispell Glacier in points, but the Wolfpack have played two more matches. The Bruins come in sitting in seventh at just 1-4 overall. HHS is the opposite at 4-1.

Helena High boasts one of the stingiest defenses in Class AA, allowing less than a goal per game led by a backfield trio of Quinn Benedetti, Kaiya Newby and Makayela Ellison, as well as goalkeeper Audri Aakre.

Offensively, the Bengals have been lights out, scoring nearly four goals per game. One reason why has been the stellar play of all-state junior Rachel Plaster, who has scored seven goals in five matches so far this season.

Junior Elsa Grebenc has also been a force for the Bengals with four goals in five matches. Additionally, a pair of freshmen have made an early impact this season for head coach Mike Meloy's squad.

Avery Kraft and Logan Todorovich have each seen significant time as forwards for the Bengals and have delivered with a combined five goals, three from Kraft and two from Todorovich, who scored her first career high school goal in the opener against Capital.

The Bruins will be led into the crosstown matchup by senior Jaymee Sheridan, an all-conference performer who has three goals so far this season. Taylor Cornwell is another contributor to watch, she has two goals in five matches for the Bruins.

As long as the air isn't deemed unsafe due to smoke, the girls match will start the doubleheader at 3 p.m. The boys will then follow at 5 p.m.

Both matches will be played at Nelson Stadium and unlike the first matchup, there will be spectators, although there will be a limit of 250.

"It will be interesting to see if that makes a difference," Wall said. "I am sure the players will appreciate having their families there to support them, but that's a big stadium and so from a noise perspective, I'm not sure it will be much different."