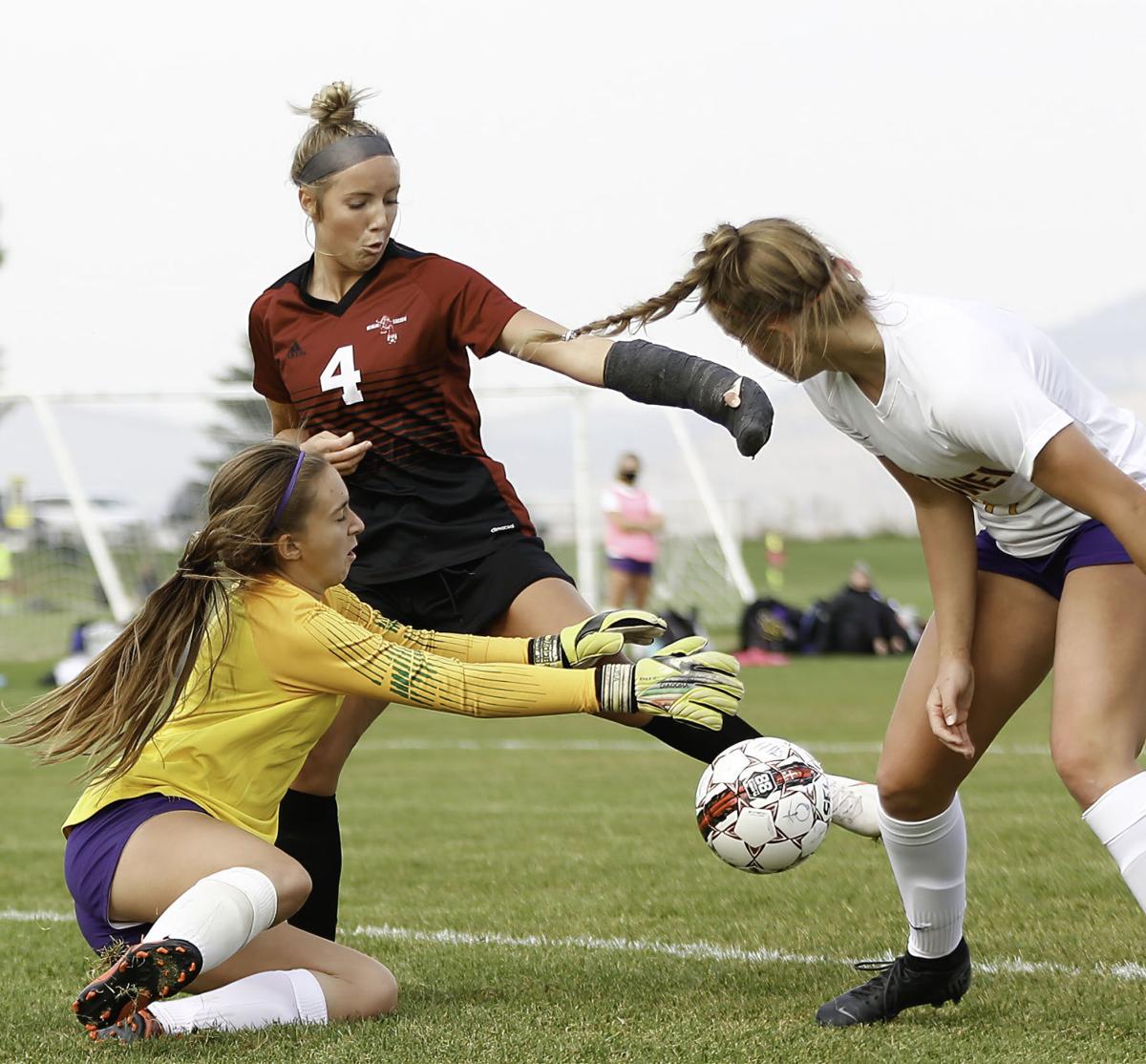 Rachel Plaster (4) of Helena High tries to attempt a shot among two Missoula Sentinel players Saturday at Siebel Soccer Fields. The Bengals won the match by the score of 2-1. 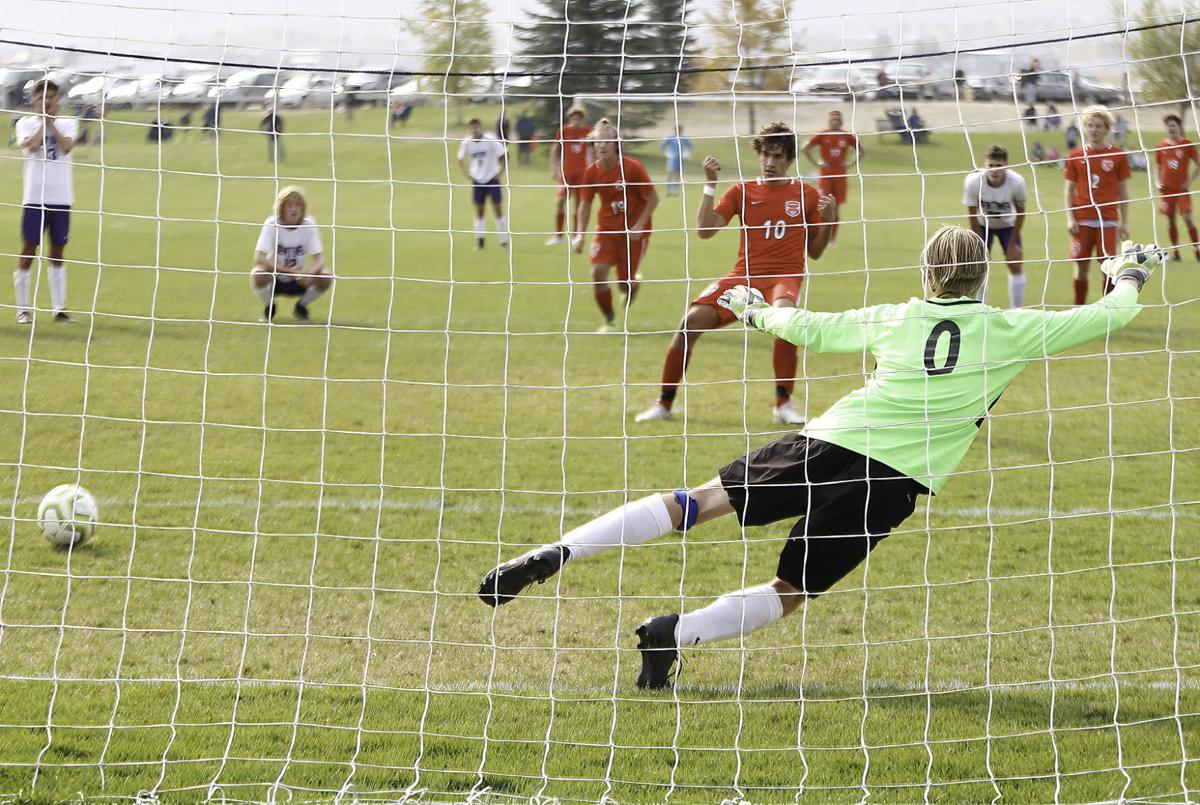 Helena High's Jacob Demmons scores on a penalty kick in stoppage to tie the game 2-2 against Missoula Sentinel at Siebel Soccer Fields. 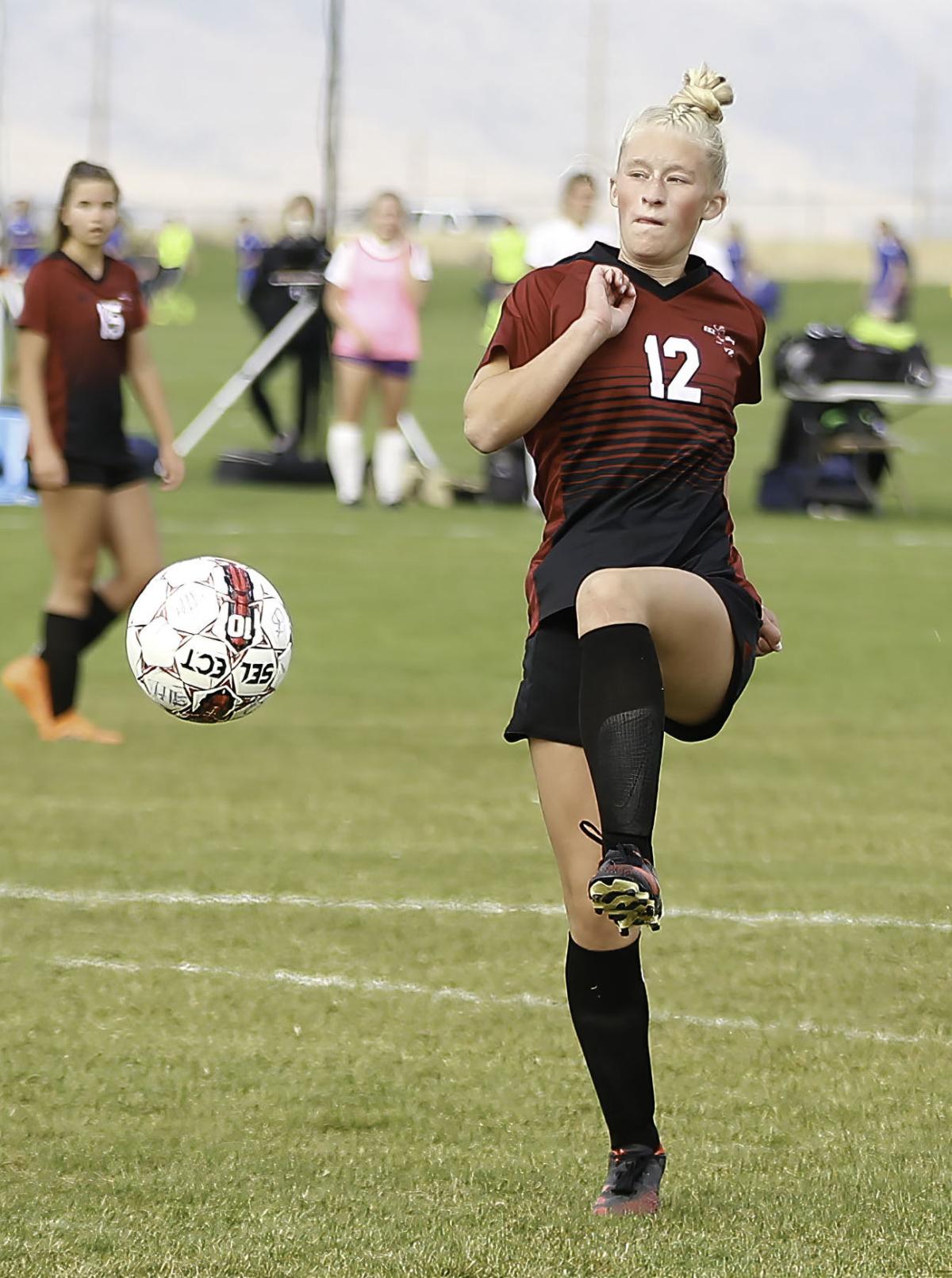 Avery Kraft of Helena High shoots a ball Saturday at the Siebel Soccer Fields in Helena. She scored a goal late in the second half to help the Bengals beat Missoula Sentinel 2-1.

Rachel Plaster (4) of Helena High tries to attempt a shot among two Missoula Sentinel players Saturday at Siebel Soccer Fields. The Bengals won the match by the score of 2-1.

Helena High's Jacob Demmons scores on a penalty kick in stoppage to tie the game 2-2 against Missoula Sentinel at Siebel Soccer Fields.

Avery Kraft of Helena High shoots a ball Saturday at the Siebel Soccer Fields in Helena. She scored a goal late in the second half to help the Bengals beat Missoula Sentinel 2-1.

While the Bengals had already clinched the top seed in the Western AA for the playoffs and a share of the conference title, they didn't want any part of a co-championship.

However, early in the second half against Missoula Sentinel, the Spartans got a goal from Jayden Salisbury putting the Bengals down 1-0 Saturday at the Siebel Soccer Fields.

Needing a win or at least a tie to take the Western AA crown, Helena sought a change of fortunes and got it when Elsa Grebenc evened things up with a goal in the 69th minute on a corner kick. A draw would have been enough for the point, but the Bengals weren't finished with their comeback.

Five minutes later, Kraft, in a situation eerily similar to Monday against Missoula Big Sky, drilled a ball from outside the box and found the back of the net, delivering Helena a 2-1 win and the outright Western AA championship.

"That was goal of ours," Helena High head coach Mike Meloy said, who has now directed the Bengals to eight Western AA titles. "And we achieved it and we won it outright and we were really wanting to do that."

While the Bengals walk away with the conference championship, they will also get home-field advantage throughout the playoffs, all the way through the semifinal round, if they were to keep advancing.

Billings West is the top seed on the Eastern side and the No. 1 seed from the Eastern AA is set to the host the championship if both top seeds advanced.

Kraft's goal was her ninth on the season, which ties her for the team lead with Rachel Plaster and Grebenc who scored her ninth Saturday too.

The Bengals will host Butte in the opening round of the Class AA playoffs, which are expected to start on Tuesday.

The Helena boys were also looking to move into a top-three seed in the final Western AA standings, but were thwarted by Missoula Sentinel as the two teams battled to a 2-2 draw.

The Bengals jumped in front with a goal in the first half, but by intermission it was tied 1-1. The Spartans moved in front in the second half and looked well on their way to a 2-1 win until a late penalty during stoppage time.

The foul came in the box, which gave Jacob Demmons a penalty kick that he scored. The final whistle blew right after.

"I was just focused on the ball and I got tripped up by the defender," Demmons said of the foul. "Then it was just a matter of putting in the penalty to tie it up."

With the tie, Helena finished fourth in the final standings, meaning the Bengals will host Helena Capital in the opening round of the playoffs.

"We are excited for the competition," Demmons said of facing Capital in the playoffs. "We wanted to get the third seed, but it's a new season. We are all starting from scratch and we just have to give it our all on Tuesday."

The Helena Capital boys were already locked into the fifth seed but earned a 2-0 victory on the road against Missoula Big Sky to head into the postseason with some positive momentum.

Luke Kailey got the first goal for the Bruins scoring on a corner kick from Nate Adamek. Eli Voss also scored a goal and was assisted by Jace Claassen.

"We have been preaching patience and playing quality possession in training and the guys really took to it today," Capital head coach Stefan Wall said. "We figured if we hung onto the ball, the win would follow. We are looking forward to the crosstown playoffs next week."

Helena won the regular season series with a win and a tie against the Bruins. The playoff match will be Tuesday at 4 p.m.

The Helena Capital girls also wrapped up their regular season Saturday at Big Sky and went down by the score of 2-1. The Bruin girls will open the playoffs as the No. 7 seed against Kalispell Glacier.

CHS was swept by the Wolfpack during the regular season. The Helena girls also swept Butte, its opening-round opponent.

Roundup from Week 7 of the high school sports season.

Check out the Saturday football, volleyball, soccer and cross country action from around the state.