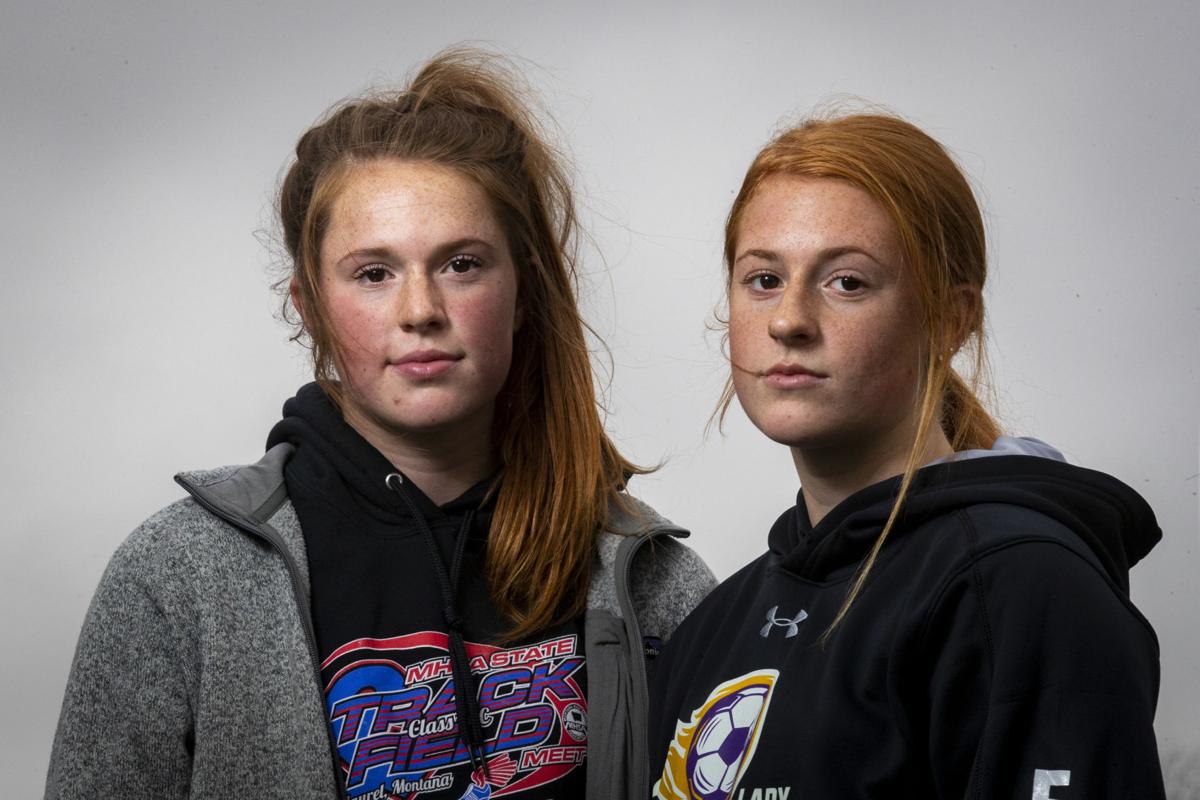 The Maack sisters, Morgan, left, and Mya, have combined for 84 career goals. Morgan, a senior, has scored 53, while Mya, a sophomore, already has 51. 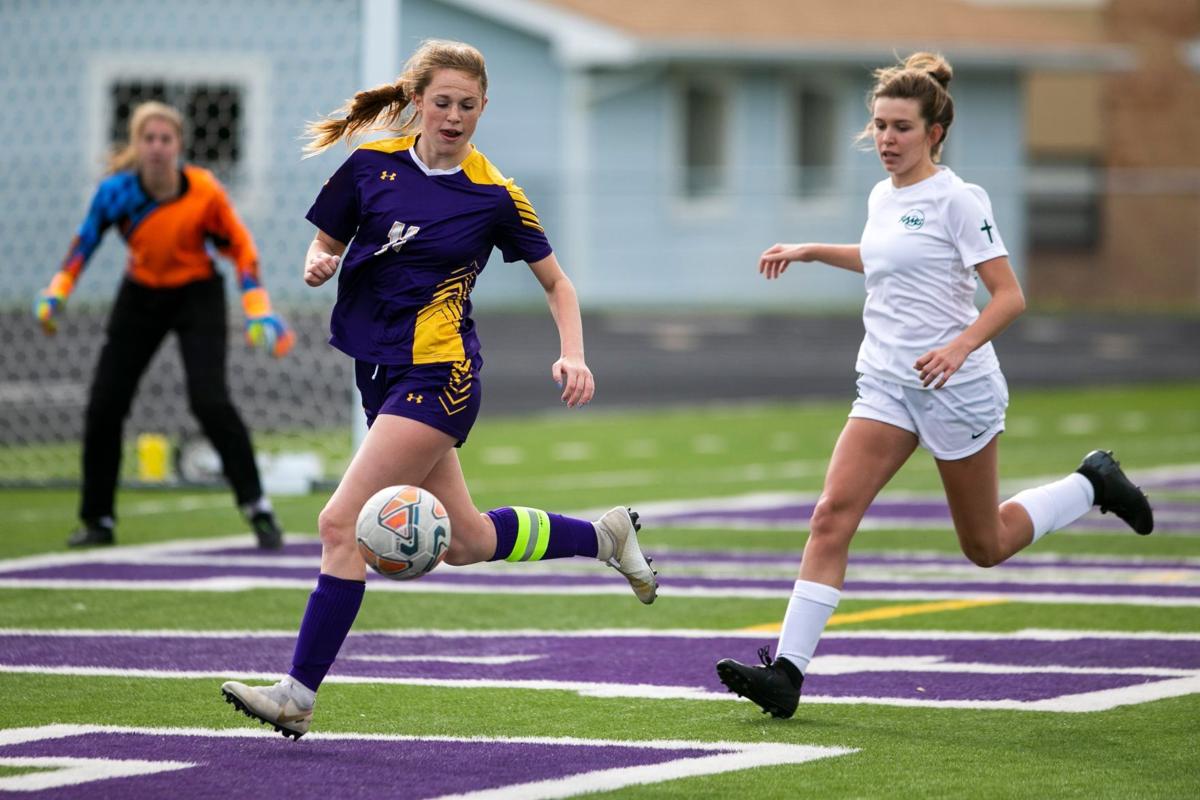 Laurel's Morgan Maack, left, has scored plenty of goals herself, but considers it her job to get the ball to other players for scoring opportunities. “It’s almost as awesome being that person who passes the ball to the goal-scorer as the one who scores the goal," she says. 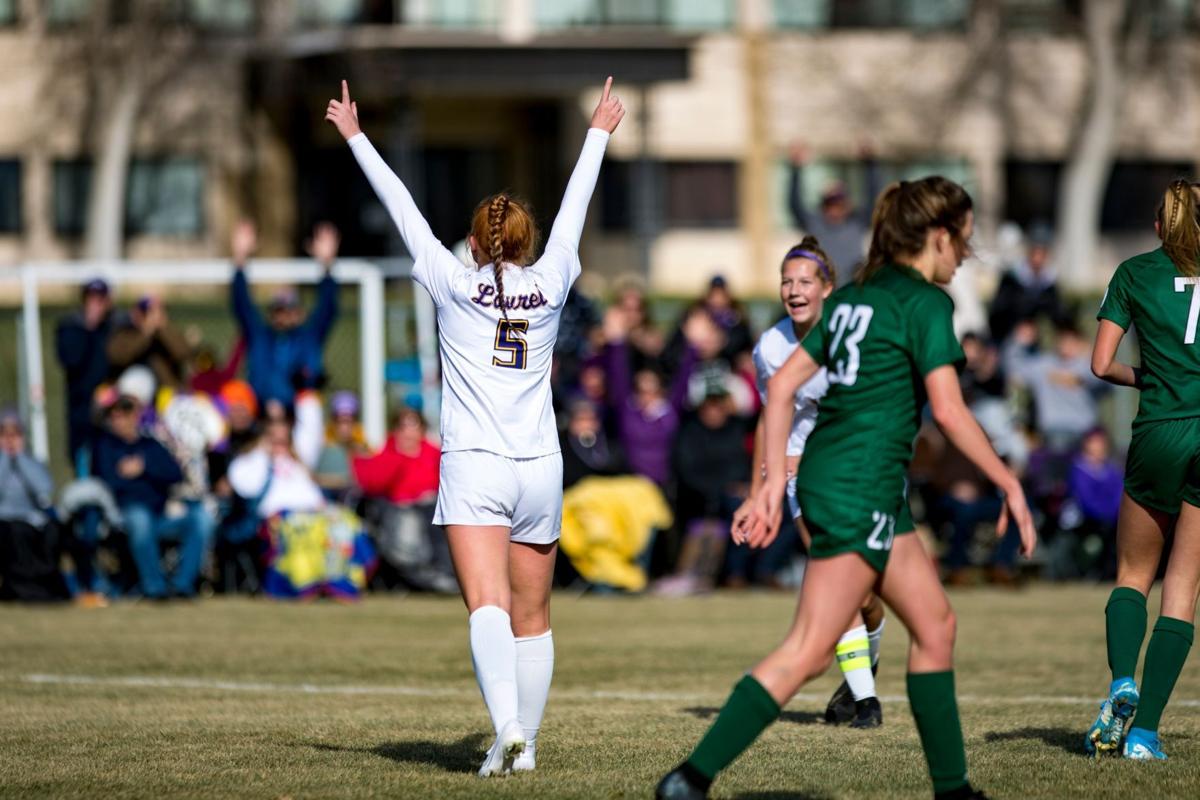 Laurel's Mya Maack turns to the Laurel crowd after she scored a goal in last season's Class A state championship match against Billings Central. Laurel coach Aloma Jess said Maack is "gregarious and lives in the moment." 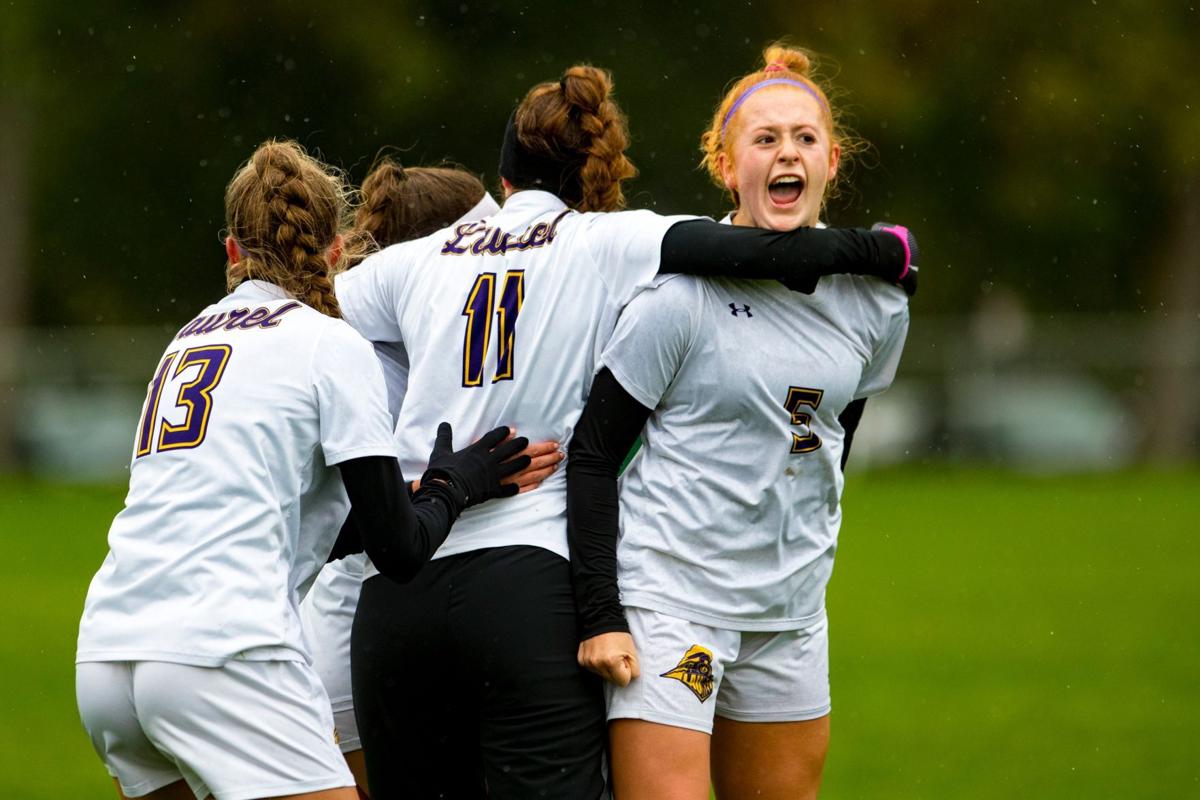 Laurel's Mya Maack, right, celebrates one of her two goals with sister Morgan (11) and Gracey Willis (13) during a match last season.

The Maack sisters, Morgan, left, and Mya, have combined for 84 career goals. Morgan, a senior, has scored 53, while Mya, a sophomore, already has 51.

Laurel's Morgan Maack, left, has scored plenty of goals herself, but considers it her job to get the ball to other players for scoring opportunities. “It’s almost as awesome being that person who passes the ball to the goal-scorer as the one who scores the goal," she says.

Laurel's Mya Maack turns to the Laurel crowd after she scored a goal in last season's Class A state championship match against Billings Central. Laurel coach Aloma Jess said Maack is "gregarious and lives in the moment."

Laurel's Mya Maack, right, celebrates one of her two goals with sister Morgan (11) and Gracey Willis (13) during a match last season.

BILLINGS — Kami Maack has a simple story to illustrate the contrasting personalities of her soccer-playing daughters, Morgan and Mya.

Kami looks back to their youth softball days when Morgan, the elder sister, would stick to her position, first base, and play it as it was supposed to be played, never straying far from the bag. The younger Mya, on the other hand, would chase after the ball regardless of her position. Wherever the ball went, Mya was sure to follow.

“It was hilarious to watch,” Kami said, “but it still holds true.”

Morgan, a senior, and Mya, a sophomore, are closing in on the end of their playing days together on the Laurel girls soccer team. Their personalities, on and off the pitch, might be different — Morgan is mostly serious, Mya thrives on emotion — but their goals are the same: Help the Locomotives to another Class A state title.

The Locomotives travel to Columbia Falls for a semifinal playoff matchup with the Wildkats on Saturday. Win that, and the Locos are in the championship match for the seventh consecutive year.

Morgan, a four-year starter, has played in three finals, helping the Locomotives win it all in 2017 and 2019. As an outside midfielder on the team, her job is to get the ball to her teammates in the best position possible.

She’s constantly observing the field and the opponent’s formation, figuring out where open spaces should be. Then she puts the ball there, almost guiding her teammates to their most advantageous spot.

“It’s not about who’s her friend, or who has the hot foot,” Mya said. “It’s about who’s the best option and in place to score right now. She finds the open player every time.”

More times than not, Morgan’s passes wind up on the foot of Mya, a bull-in-a-china-shop kind of player.

Mya, accustomed to playing with her sister and other older players while competing for her father Tom’s Laurel club teams, came onto the scene last season as a freshman and made an immediate impact.

Go get the ball, and put it in the net. Kind of like her softball days.

Mya scored 31 goals last season and has 20 goals this year in a season that’s been compacted to nine games so far for Laurel because of a canceled nonconference schedule to limit travel and overnight trips due to the COVID-19 pandemic.

“She has that confidence, and no one matches that,” Morgan said. “Her confidence is insane. It’s not cocky. She knows she can do it and it makes her that much better.”

The Maacks moved to Laurel from Billings when Morgan was 18 months old after previously living in Washington state before Morgan was born. Tom, who had previous soccer experience, took over the high school boys program for a time until Morgan was old enough to play.

Then he coached his daughters’ club teams and travel teams, and the girls participated in development programs. (Tom, who returned to coaching the Locomotive boys this fall, also coached every player on the Locos’ girls team at some level of club ball.)

“The Maack family bleeds soccer,” said Laurel girls coach Aloma Jess, who has been in charge of the team since 1999 save for the 2005 season when she was deployed to Utah for 18 months as part of the Montana Army National Guard. “They just really do.

“Besides Tom, (Morgan and Mya) have been very involved in some of the youth soccer. They’ve coached, they’ve helped out, so it’s heavily ingrained in the Laurel community.”

Also heavily ingrained is the sister’s love of playing for and with one another. Morgan, whose 53 career goals are accentuated by 28 assists, recently signed with Rocky Mountain College.

Mya put aside her live-in-the-moment outlook to take some time to look back and look ahead.

“I always have someone I can be with, somebody I can talk to, and I’m very thankful for that,” Mya said about her playing with her sister. “I’m thankful that I get to have these two years — I wish I could have four years with her — but I’m very glad that I got two years with my sister and now I get to watch her play collegiate soccer, so I’m very excited about that.”

And, like her softball days, Morgan stayed in her lane when asked to sum up her final days as a high school player. Analytical. Calculated.

“I’ve been to the state championship three times, and I believe that we can beat Columbia Falls,” she said as just a hint of emotion crept into her voice. “But it’s also like, what if we don’t? I try to focus on this one week. You have one game to get through this week. You have to win this game if you want to play again.

“Everyone has to think this is the most important game on Saturday because we have to get through Saturday to get to next Saturday. That’s what I try to focus on most.”

For Central’s Nolan Trafton, who coaches both the boys and girls, it will be a harried day, even if it is only 10 miles or so between Columbia Falls and Whitefish.

“Even in a worst-case scenario, if the boys go into extra time or PKs I think I should be able to make it to the girls game by kickoff,” Trafton said, adding his assistants Jaelene Flynn, Michaela Stock, Sean Flynn and brother Kyle Trafton can handle anything that pops up. “My plan is to get there so that I’m there for most of the warm-up.”

As for the matches themselves, well, this year is different than most. In non-pandemic years, teams from the opposite side of the state usually run into one another early in the season for nonconference matches. This year those matches were canceled in hopes of keeping players as insulated from coronavirus as possible.

So, teams will rely on past experiences with one another.

“Columbia Falls is a young team that we know will play a good style of soccer,” Trafton said of the boys semifinal. “The Whitefish girls are always coached really well. They know us well, I feel like we’ve met them in the playoffs quite a few times over the past few years. So, another team that knows us well that is going to play us hard. But I like our chances in both games.”

Jess, the Laurel coach, expects a tough match against Columbia Falls even though the Wildkats graduated Josie Windauer, whose 33 goals last season were the most in Class A.

“I think our girls have been around the Columbia Falls girls enough to know who they are, how they play. We have an inkling of what they were about,” Jess said. "We’ve got a little bit of comfort knowing that it’s pretty much the same team as last year, minus the seniors they graduated.

“However, as a coach, I would have loved to have played them in the preseason, but we didn’t get that. I still think the girls are prepared for this and I do believe that we should be the better team.”

Maack has 11 goals and seven assists this season heading into Saturday’s Class A playoff semifinal match at Columbia Falls.