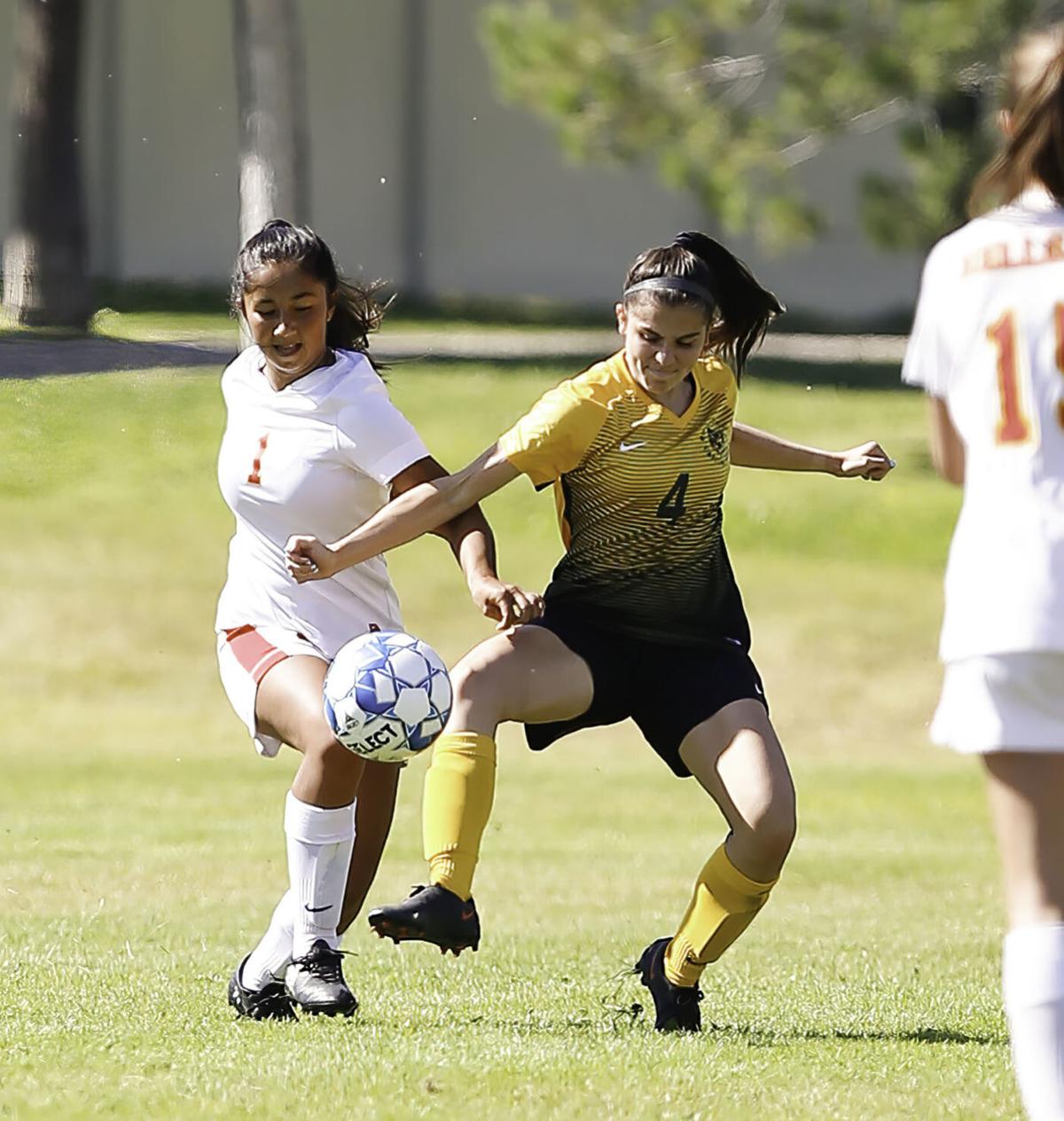 Carmen Anderson of Missoula Hellgate and Vivian Schuma of Helena Capital battle for a battle Saturday at Northwest Park in Helena. 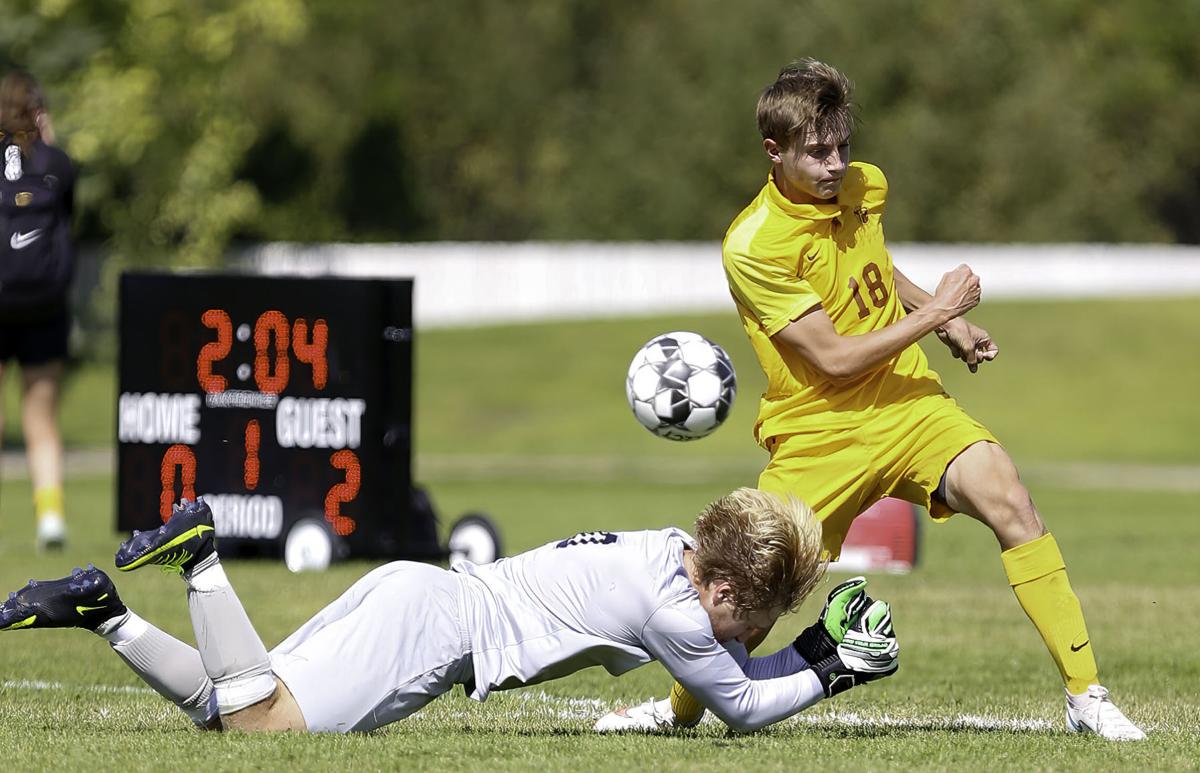 Henry Lauerman of Helena Capital fights for the ball with Missoula Hellgate's Griffin Richter Saturday at Northwest Park in Helena.

Carmen Anderson of Missoula Hellgate and Vivian Schuma of Helena Capital battle for a battle Saturday at Northwest Park in Helena.

Henry Lauerman of Helena Capital fights for the ball with Missoula Hellgate's Griffin Richter Saturday at Northwest Park in Helena.

HELENA – The Missoula Hellgate Knights imposed their will during both the girls and boys games Saturday at Northwest Park, defeating Helena Capital 6-1 and 6-0, respectively.

“I just really feel like we played our game today,” said Knights girls coach Natalie Hiller-Claridge. “What we’ve been working on all year, I feel like it came together. We kept possession in our midfield and won it up front, and held our line in our defense really well.”

Squaring up with a talented team is always difficult and when they’re on their game, it can make for a long afternoon.

“I thought we played really good,” said Hellgate boys coach Jay Anderson. “I wanted to make sure we controlled the tempo of the game, which I thought we did. Capital is a pretty athletic team. I thought they did great defensively on us for a while and it took us a while to get through. I was proud of the way that we handled the ball and were able to move it around.”

Carmen Anderson got the Knights on the board first during the girls game with about 33 minutes to play in the first half. Hellgate took a corner from the left side and Gabby Beaton crossed it into the box.

“It was a great cross to the left side of the PK spot,” Carmen said. “I just decided to go near post and kind of hit it off my head as best I could.”

A few minutes later, Beaton drove one through the posts to extend the Knights lead to 2-0.

Capital’s Jaymee Sheridan answered right back. With 24:30 to go in the first half, from the right side of the net she placed a great ball in the top-left corner to cut the Hellgate lead in half, 2-1.

“In the first half we got those two goals and they got one back so we kind of felt a little down,” Carmen said. “But then the second half, I think we just picked it up from the start and acted as if it was 0-0, and kept that momentum going.”

The Knights dominated the final 40 minutes. They were connecting their passes, maintaining possession in the midfield and they knew where the next pass was going before it was made.

“As a coach, that was fun to watch,” former Lady Griz standout Hiller-Claridge said.

Carmen scored her second goal of the game after receiving a pass just outside the 18 from Ashley Young.

“She passed it to me because I was calling for it,” Carmen said. “Then I took a touch and hit it with my right foot, and got it around the defender.”

Grace Gibson-Snyder tacked on a pair of goals, both assisted by Lucia Baker.

“That was a frustrating piece for us,” said Bruins girls coach Brandon Price. “This team has all the talent they need. They have the skills they need. They’re well-conditioned. This was a mental game. The game won’t just happen and I think it’s a bit of a life lesson. It doesn’t matter how good you are. If someone’s going to out-hustle you, you’re going to lose. Talent is great but if you’re not going to put it in when you get out there, it doesn’t make any difference.”

The boys game was even less suspenseful.

Reggie Duce got the Knights going with the first goal of the game.

“I checked back to the half and the defense was tracking on me so I spun around, and Marcus (Anderson) played me a good through ball,” Duce said.

Duce took a couple touches and chipped it over Bruins goalkeeper Henry Laurerman.

Becket Arthur made it 2-0 Knights a few minutes later.

After dribbling down the middle of the field past a pair of Capital defenders, he took a touch to the right and hit the ball into the bottom corner from outside the 18.

Arthur extended to lead to 3-0 before the half.

“I was pressing the defense really hard,” Arthur said. “And I followed up and blocked (the defender’s) clearance. The goalie got hands on it but kind of pushed it out, so I cut it back.”

During the second half, Duce added another goal to make it 4-0. Jonah Teasdale’s penalty-kick made it 5-0 and Marcus Anderson added the sixth goal for the Knights.

“Where Hellgate’s really good is capitalizing on turnovers in the midfield,” said Bruins coach Stefan Wall. “We knew that before the game. We just need to do a better job of not turning the ball over in those spaces and allowing them to go at it. They play faster than we do, so we need to see that and figure out how to play a little bit faster. And we have to see little things that we aren’t quite seeing yet.”

The Bruins will host Big Sky on Tuesday at Northwest Park. Hellgate’s next game is Tuesday at Butte.

Check out the Saturday football, volleyball, soccer and cross country action from around the state.