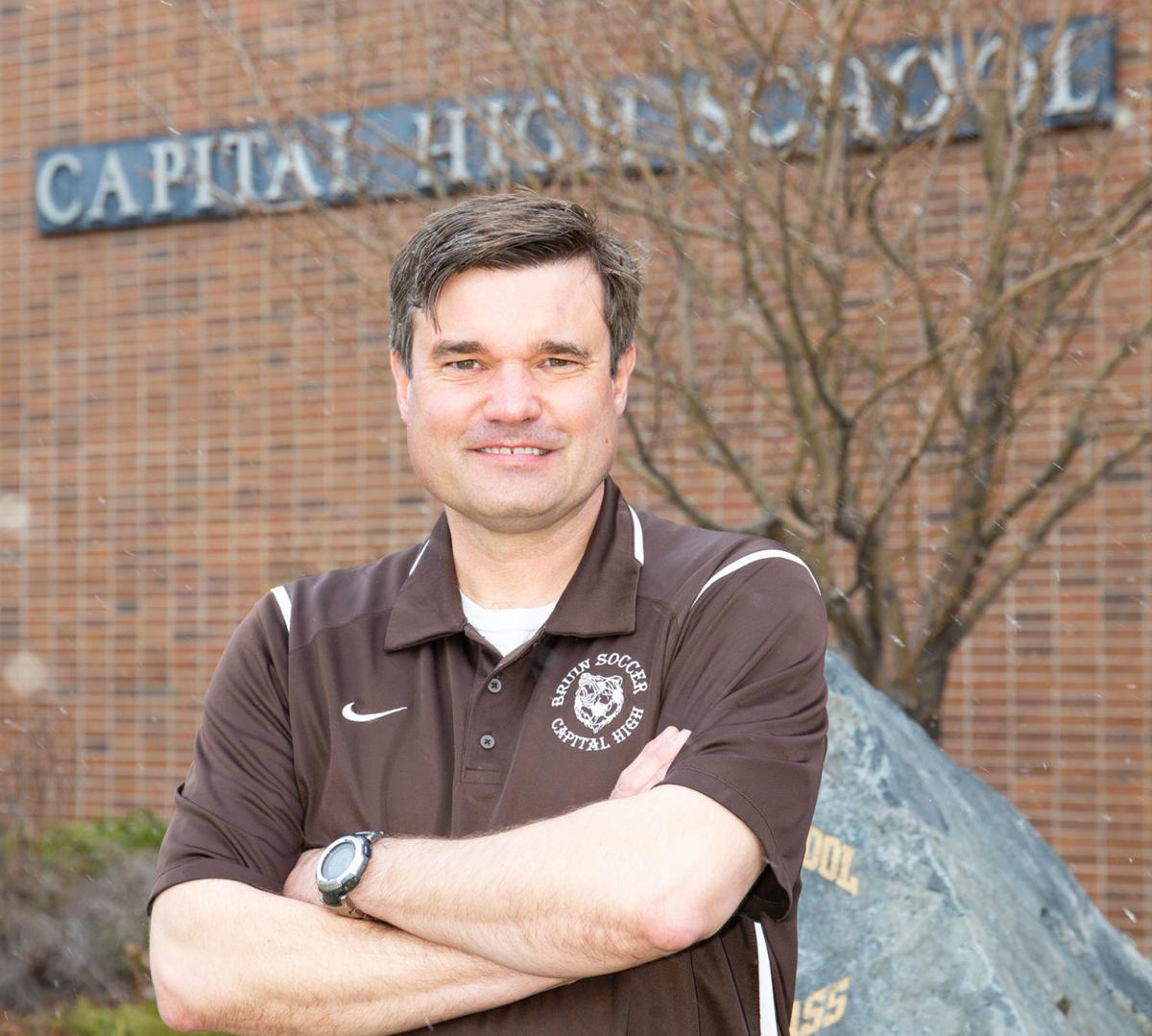 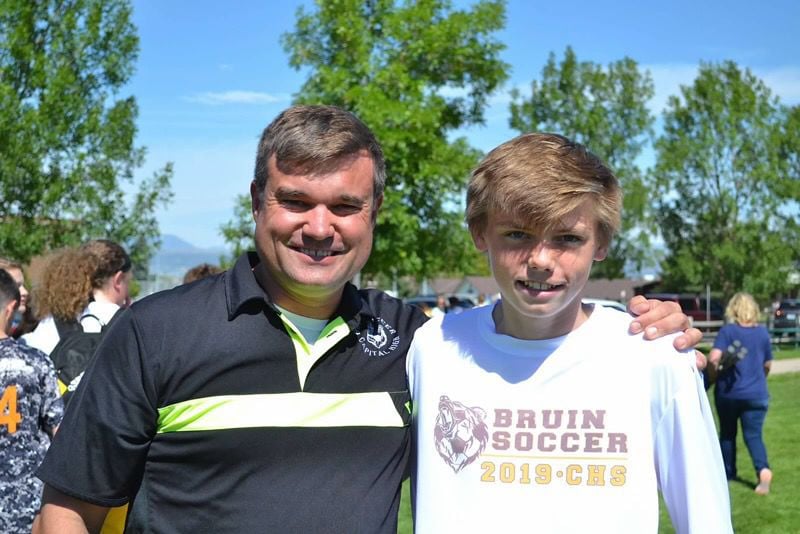 Stefan and Addison Wall pose for a photo last year in Helena.

Stefan and Addison Wall pose for a photo last year in Helena.

HELENA – It was Stefan Wall’s drive and passion for soccer that led him to Helena Capital, where he is now the head coach of the Bruins boys. He will be taking over for Paul Patterson, whose five-year tenure as Capital coach was capped by a deep tournament run into the Class AA state semifinals.

During the backend of his playing career, Wall played intramurals at the University of Nebraska College of Law and then played in an adult league in Chadron, Nebraska, where he lived after he finished his degree before moving to Montana in 2001.

“I got the chance to relocate to Helena and played one year in the adult league, which was frustrating for me,” remembers Wall. “I was more competitive, athletically, than I am now. When a player once told me to stop telling him what to do, I thought, ‘What do you mean? That’s the way you play the game.’”

Wall’s competitive edge did not sit well with that particular person, but it did catch the eye of longtime Helena referee Hugh Zackheim.

“He asked me if I would be interested in coaching in the Helena Youth Soccer Association,” Wall says. “I told him I would, but I didn’t have the time to be a full-time head coach because I was trying to get my law practice off the ground here in Helena.”

Zackheim assured Wall, who is now a private practice attorney at Wall, McLean & Gallagher, PLLC, that the situation would work just fine. The league’s executive director was going to be the coach and he needed an assistant. That man turned out to be Patterson.

“Based on what I’ve seen, he understands that success in soccer depends on team unity and character, in addition to skills and strategy,” Zackheim explains.

And put simply, Wall’s ability to understand how to succeed has paved the way for massive success where ever he has been.

A native of Lincoln, Nebraska, Wall grew up in a part of the country where football was and is king. Soccer was not a varsity high school sport until he was a junior in 1987.

“So, I was part of the inaugural high school season in Nebraska,” Wall says. “I played club ball and was part of the Olympic development program in Nebraska in 1986 and ’87. I got the chance to play on the football team, which was fun.

“I was a two-sport athlete and the first dedicated kicking specialist at Lincoln High School. I handled kickoffs, field goals and PATs. I was all-city, all-state soccer player in high school. I was a goalkeeper. By the time I got to high school I played on the field quite a bit and I actually prefer that to playing in goal. But, we needed a goalkeeper and I happened to be good at it. That was fortuitous for me because that got me into college soccer. I probably wouldn’t have made it as a field player, but I did as a goalkeeper.”

Wall understood from a young age playing soccer at a high level wasn’t something people can do forever. He was sure to always get his money’s worth, and then some.

“I had a core group of friends that I played with coming up,” Wall says. “We were juniors when Nebraska got varsity soccer in place, and I felt like we were foundational in that program in terms of getting it established.

“There were some seniors but they hadn’t played the game as long as we had. We knew all the churches in town that had gyms – in the wintertime – and we would go without asking permission. We figured since it’s a church we could ask for forgiveness. We would go and play indoors during the winter. No coaches or anything, we would do it selectively. We would call people who we thought were the best players and excluded some guys we didn’t think were good enough to play. We wanted to play at a higher level.”

In addition to polishing the skills of his athletes, Wall’s goal as a coach is to instill that drive and self-motivation. He wants players to want to improve even when their coaches aren’t watching.

“When you get older you understand that this comes to an end,” Wall says. “You can keep playing but it’s not the same. That competitive side of the game where you have a chance to get to your peak form, it’s just not the same. So that’s what we’re trying to tell our guys.”

After high school, Wall was an NCAA Division II standout at Truman State in Missouri.

“My big claim to fame is that I was an NCAA All-American and an Academic All-American,” he says. “So, I had a pretty good college career. We didn’t win as many games as I would have liked. We only made the tournament once. That was my junior year – my All-American year. I had a great, great experience playing soccer.”

Wall had a chance to play professionally after college in “what was sort of a pre-MLS league.” It would have required him to opt out of college before obtaining a degree.

“I didn’t think that was a good financial decision,” Wall says with a chuckle. “And so my career ended after (college) and I graduated in ’92.”

Now, in the midst of his second stint of coaching in Helena, Wall is assisted by men he coached when he first met Patterson.

After the birth of his third child, Wall took a break from coaching. Once he had more free time, he rejoined Patterson in 2015.

“I just didn’t have the time to do it,” he says. “When Paul got the gig – six years ago now, I guess it was – I thought it would be a good idea if I helped him. And that’s how I got to Capital High School.”

Wall anticipates a smooth transition into the head coaching role. Patterson set up his coaching infrastructure as less of a hierarchy and more of a collaborative effort.

No one wants extra administrative work and the headaches that come as a result. But Wall embraces it as something he should do to give back to a sport that has been generous to him.

“I’ve gotten a lot from the game and I owe it a lot,” he says. “I’m anxious to continue to give back to it.”

“In the five years he coached with me in high school, he’s got a rapport with the boys that’s really good and really well received,” Patterson says. “And I can’t say enough about him.”

“I have a senior this year – my oldest daughter. I coached her as a little girl,” Stefan says. “She’s taken after her mother who was a state-champion runner in high school. So, she’s a runner but I have a sophomore (son) Addison, who was the only sophomore starter on the varsity last year. That’s a decision I left up to the other coaches entirely. And then, as I’ve mentioned, Zephyr, a sixth-grader is my youngest. He'll be a freshman at Capital after Addison graduates.

Both Capital soccer teams are keeping a positive mindset as the 2020 season is scheduled to start Saturday against Helena High at Nelson Stadium.