Stevensville's Anikah Thorsell races to beat Polson's Chloe Matt to the ball Saturday. Thorsell won the race and finished with the go-ahead goal in the Yellowjackets 4-2 win against the Pirates. 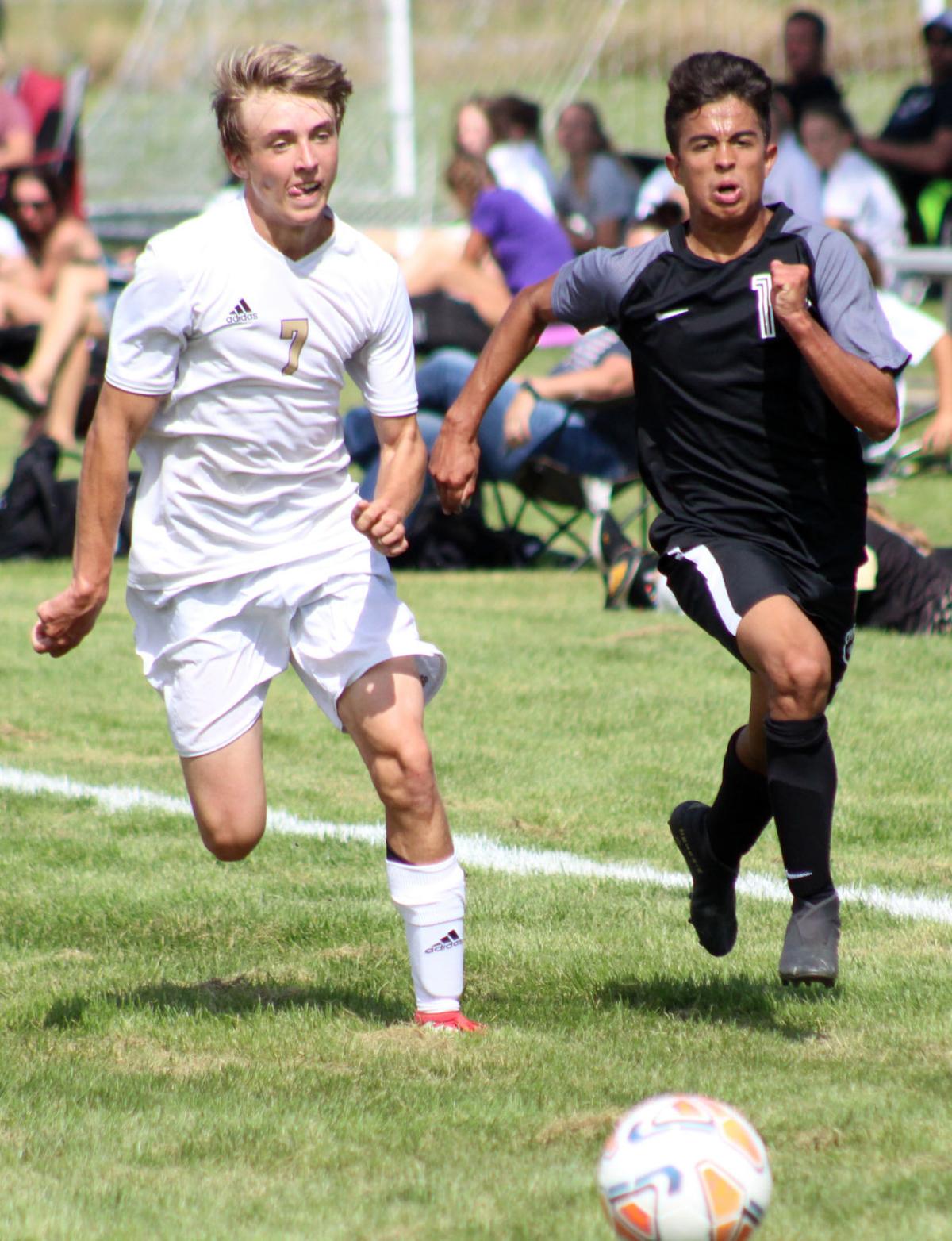 Polson defender Zevan Walker (7) and Stevensville's Carlos Morales race to the ball down the sidelines Saturday in Stevensville. The Pirates held off the Yellowjackets, 2-1. 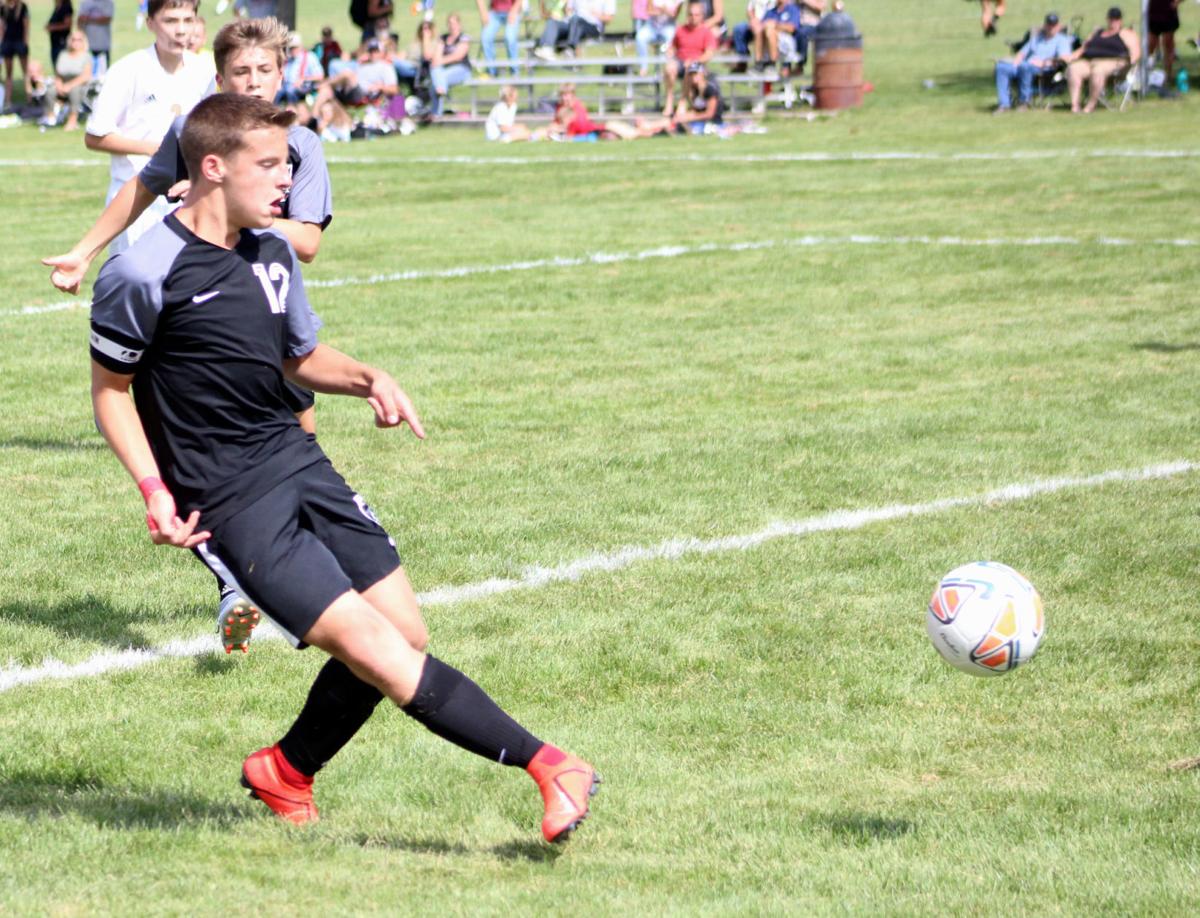 Stevensville's Garrett Schreiber shoots for a goal in stoppage time of Saturday's game against Polson. Schreiber's score came on a rebound off the shot of Mathew Radford, but the Yellowjackets were unable to find the equalizer and they fell, 2-1.

Stevensville's Anikah Thorsell races to beat Polson's Chloe Matt to the ball Saturday. Thorsell won the race and finished with the go-ahead goal in the Yellowjackets 4-2 win against the Pirates.

Polson defender Zevan Walker (7) and Stevensville's Carlos Morales race to the ball down the sidelines Saturday in Stevensville. The Pirates held off the Yellowjackets, 2-1.

Stevensville's Garrett Schreiber shoots for a goal in stoppage time of Saturday's game against Polson. Schreiber's score came on a rebound off the shot of Mathew Radford, but the Yellowjackets were unable to find the equalizer and they fell, 2-1.

STEVENSVILLE — In the Stevensville girls' postgame talk, head coach Nick Giese explained how his squad controlled the middle of the field for 80% of the game in its 4-2 win.

Polson made its 20% count, though, scoring two second-half goals in two minutes to tie the game at 2-2 with 8 minutes remaining. From there, though, it was Stevensville's 100% effort push to the finish that gave the Yellowjackets the nonconference win.

"(Polson) got like four yellow cards in a row, and I just kept telling (my team) we have to play our game. We can't do that. We have to keep pushing," Stevensville goalie Addy Rodolph said.

Rodolph also helped spark her squad with a huge one-on-one save late in the game.

After Stevi freshman Anikah Thorsell broke through for a go-head one-on-one goal of her own to give the Yellowjackets a 3-2 lead, Polson countered with a try. Sophia Moderie got a step on the Yellowjacket defense, leaving only Rodolph between Moderie and the equalizer.

Moderie, who scored Polson's first two goals, fired on net, but Rodolph got a touch on the ball, which then bounced off the crossbar and rebounded back in the goalie box. Stevi defender Ashton Lewis was able to kick the ball out of bounds for a Polson corner, but the main threat had been stymied.

"It literally saved us. It kept us from deflating," coach Giese said of Rodolph's save. "Had that gone in there, the wind likely would have been in their sail and it's a different ball game."

Instead Polson pressed on the ensuing set play and drew two yellow cards in one instance. One yellow card was a Pirate player's second of the game, forcing Polson to play a position short.

The Yellowjackets capitalized with an insurance goal — a rebound put-back off the foot of Olivia Peretto. Claire Hutchison earned the assist after her initial shot-on-goal was saved but then skipped to the awaiting Peretto.

With Peretto's goal coming in stoppage time, Stevensville, which got first-half scores from Mckenzie Brownlee and Hutchison, simply had to run out the clock.

The Stevensville boys were racing to beat the clock in second-half stoppage time when they finally broke through for their first goal.

The problem was the Yellowjackets needed another.

The Pirates, who got a second half goal from Kaden Nelson that proved to be the difference, built a 1-0 lead in the first half on a direct kick from Tray Lichtenberg. Lichtenberg's kick squirted through the Stevi's goalie's hands and found Davis Smith's forehead for a simple tap-in to the empty net.

The score frustrated the Yellowjackets, who had dominated possession in the first half, particularly because senior keeper and captain Ben Schreiber had initially made the save on the set play. Polson seemed to have already used its direct kick, one that Schreiber saved, but the entire play was whistled dead and reset.

Lichtenberg's next kick connected with Davis and found the back of the net.

"That was running through my mind for the next couple minutes, but it's not the first time it's happened and it probably won't be the last, so you gotta throw it out of your mind and use it as motivation to do better," Schreiber said.

And Schreiber was solid throughout. He made 10 saves, including an impressive charging stop that setup a Stevensville counter attack in stoppage time.

That's when the Yellowjackets broke through. It came as senior captain and striker Chance Lester centered a pass to Mathew Radford. Radford shot on net and was initially stopped by Polson netminder, Gabe Mergenthaler. But the ball bounced out to Garrett Schreiber, who buried the shot.

"We worked hard in the first half and energy dropped for the next 30 minutes, but we picked it up in the last fifteen," Ben Schreiber said. "Unfortunately it was just too late."

Lester again had a late run in the waning moments of stoppage time, but the Polson defense kicked the ball out of bounds behind the net and the game was whistled over before Stevensville could try a final set play.