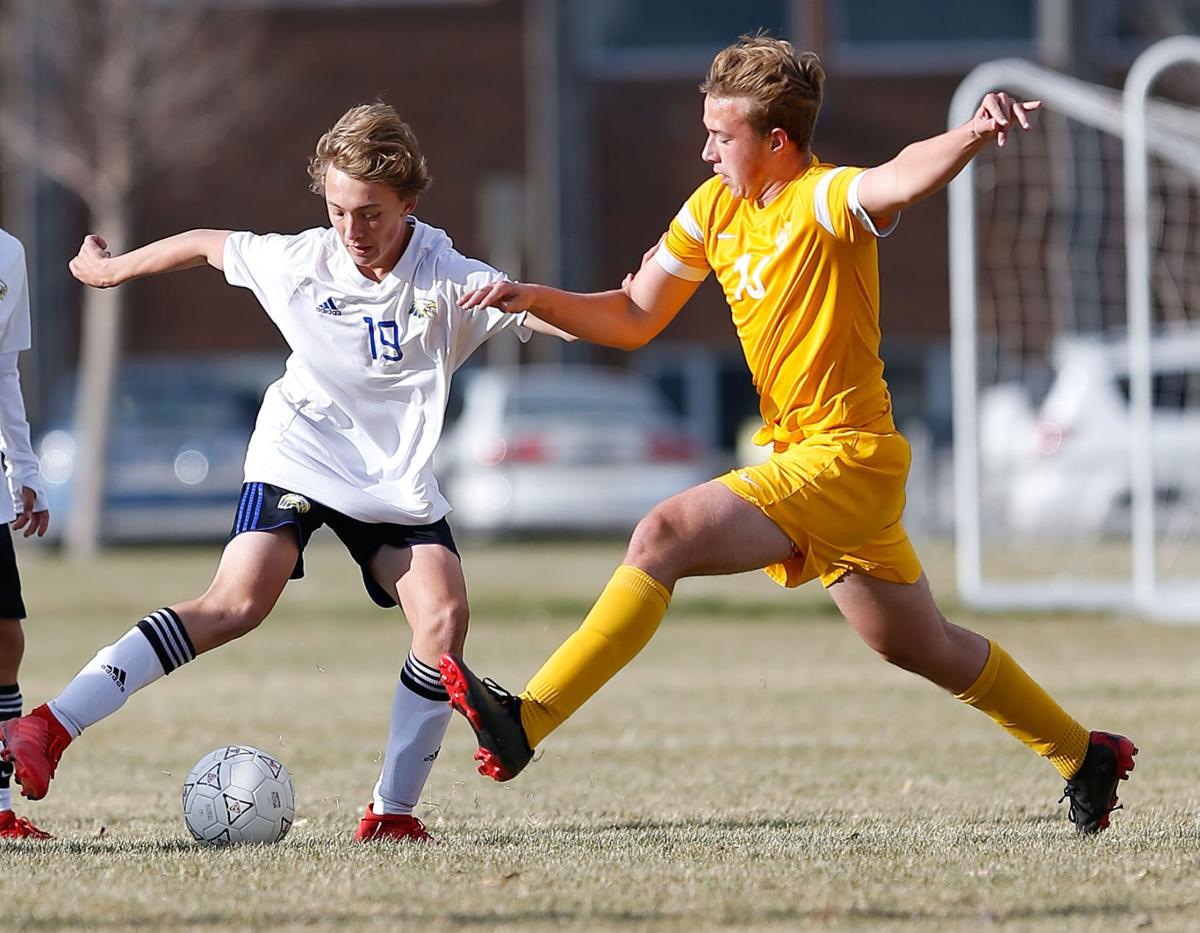 Helena Capital’s Eli Voss, right, is one of six seniors leading the way for the Bruins in the 2020 season. 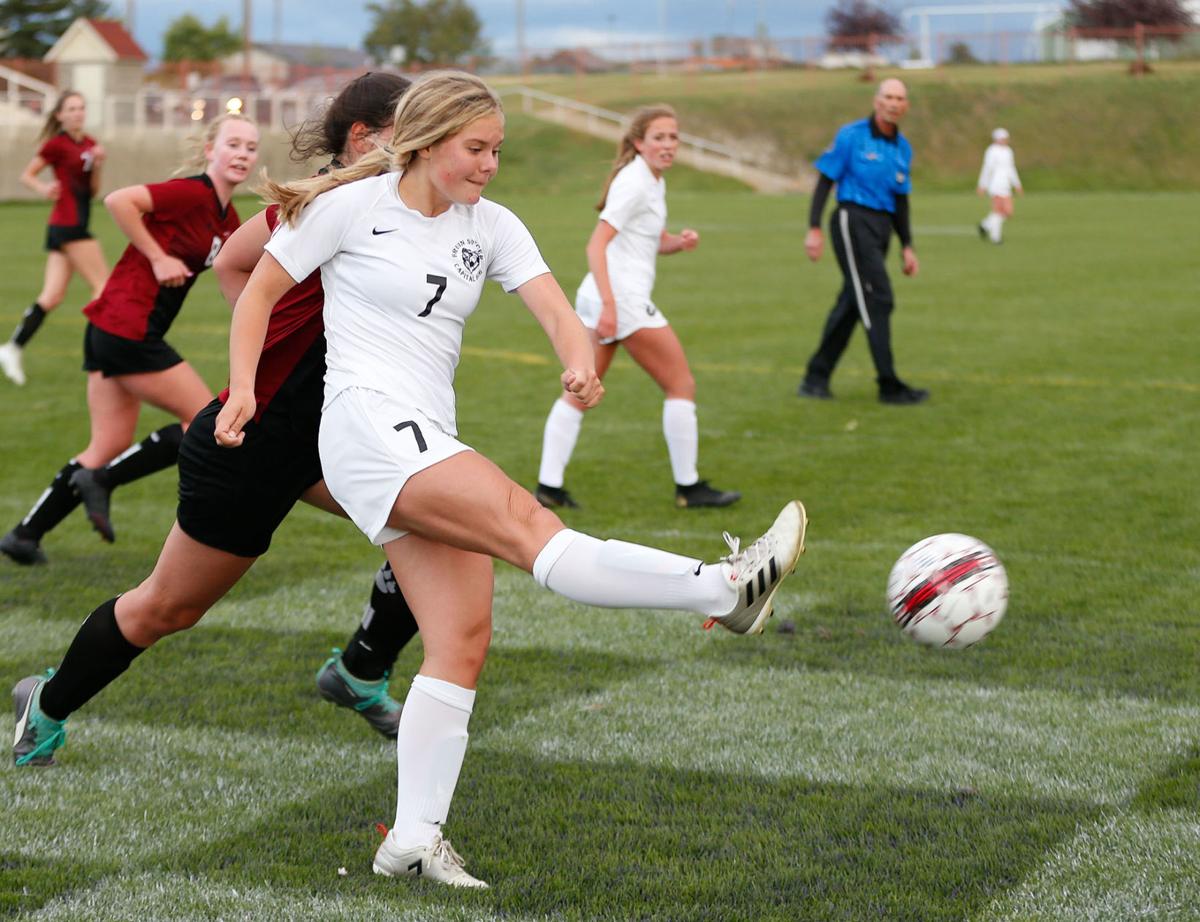 Helena Capital’s Jaymee Sheridan clears the ball away from the Bruins net during last season's crosstown game against Helena High at Nelson Stadium.

Helena Capital’s Eli Voss, right, is one of six seniors leading the way for the Bruins in the 2020 season.

Helena Capital’s Jaymee Sheridan clears the ball away from the Bruins net during last season's crosstown game against Helena High at Nelson Stadium.

HELENA — Change is a constant in sports, especially at the high school level and with a new head coach, as well as some new faces on the pitch, change is sort of a theme for the Helena Capital boys soccer team this season.

While former head coach Paul Patterson is gone, a familiar face will be running the show for Capital in Stefan Wall, a long-time assistant with the program.

"Notwithstanding the fact that we are in the middle of global pandemic, it's really business as usual for us," Wall said. "We had a great turnout all summer and we've had a really strong fall camp. We are ready to get going."

The Bruins and crosstown rival Helena High will each get their season going Saturday against each other at Nelson stadium on the campus of Carroll College.

"It's going to be a good matchup," Capital senior Eli Voss said. "It will be one of our last matches against each other, so that will be fun."

Despite a fairly smooth transition at head coach, the Bruins will be a different team this year, simply out of necessity. Gone are all-state goal scorers Ryan Quinn and Caleb Hoxie. In all, Capital graduated six players who are now playing collegiate soccer.

"We had eight seniors and six of them signed to play in college," Wall said. "You don't replace that."

But that doesn't mean the cupboard is bare.

Capital returns one of the better defenders in the Western AA in senior Auggie Tupper, who earned all-conference honors in 2019. Goalie Henry Lauerman, another senior, was also honorable mention all-conference.

"I am just so excited that we are going to have a season," Tupper said. "I know all the boys out here are looking forward to playing and we are all willing to do whatever it takes to have a season."

Eli Voss is another experienced midfielder for the Bruins. He scored two goals and notched two assists a season ago. He also echoed the sentiment of Tupper.

"I'm super excited for this season," He said. "We are just trying to keep the positive mindset that we are going to be able to play."

Ethan Peterson, Nathan Adamek and Jared Nelson are other seniors that will contribute this season.

"We've got a really strong core of seniors that will be our backbone in the middle of the field," Wall said. "I feel like that's something that we can really build on. We have a lot of young talent, which is not typical. We have freshman that are going to play and play a lot. That's going to be the big question for us, can we infuse new talent in a way that proves to be successful?"

At the very least, the style of play might be different, as the Bruins plan to play more conservatively.

"We will play a little bit differently," Wall said. "We are going to have to find a way to score some goals and we are working on that. But it's not going to be a track meet. If it is, we are probably in trouble.

"But I would put Henry (Lauerman) up against any goaltender in the state," he added. "And our back five should be better and that's what we are going to rely on."

The Bruins were state semifinalists in 2019 and lost out to Bozeman following a 9-4-1 regular season.

Glacier and Missoula Hellgate are among the top contenders in the Western AA. Capital and Helena High should be in the mix along with Missoula Sentinel, Missoula Big Sky, Kalispell Flathead and Butte High.

Led by head coach Brandon Price, the Capital girls come into the 2020 season also needing to replace their leading scorer from a year ago, Ellie Stifler.

The Bruins were 2-8-4 last season and were knocked out in the first round of the Class AA playoffs. Helping to lead the charge for Capital will be Jaymee Sheridan, who scored four goals last season for the Bruins and is one of 10 seniors on the team this year.

"I think for a lot of them, getting back this summer was a huge mental boost," Capital girls head coach Brandon Price said. "Even with all the distancing and the masks, just to see kids run and play, it was really good and still is, as long as they let us go, it's good."

While the Bruins will have a slew of returning players from a year ago, they will have a fresh face in net as freshman Brooklyn Brisco will be the goaltender.

As with the boys team, the girls can't wait to hit the pitch Saturday against Helena High.

"They are just jonesing to be on the field," Price said. "They have worked hard all summer long and I think everyone is anxious to put it to the test."

He knows how to build a winning culture.

The West is full of championship experience, but will there be a surprise challenger?