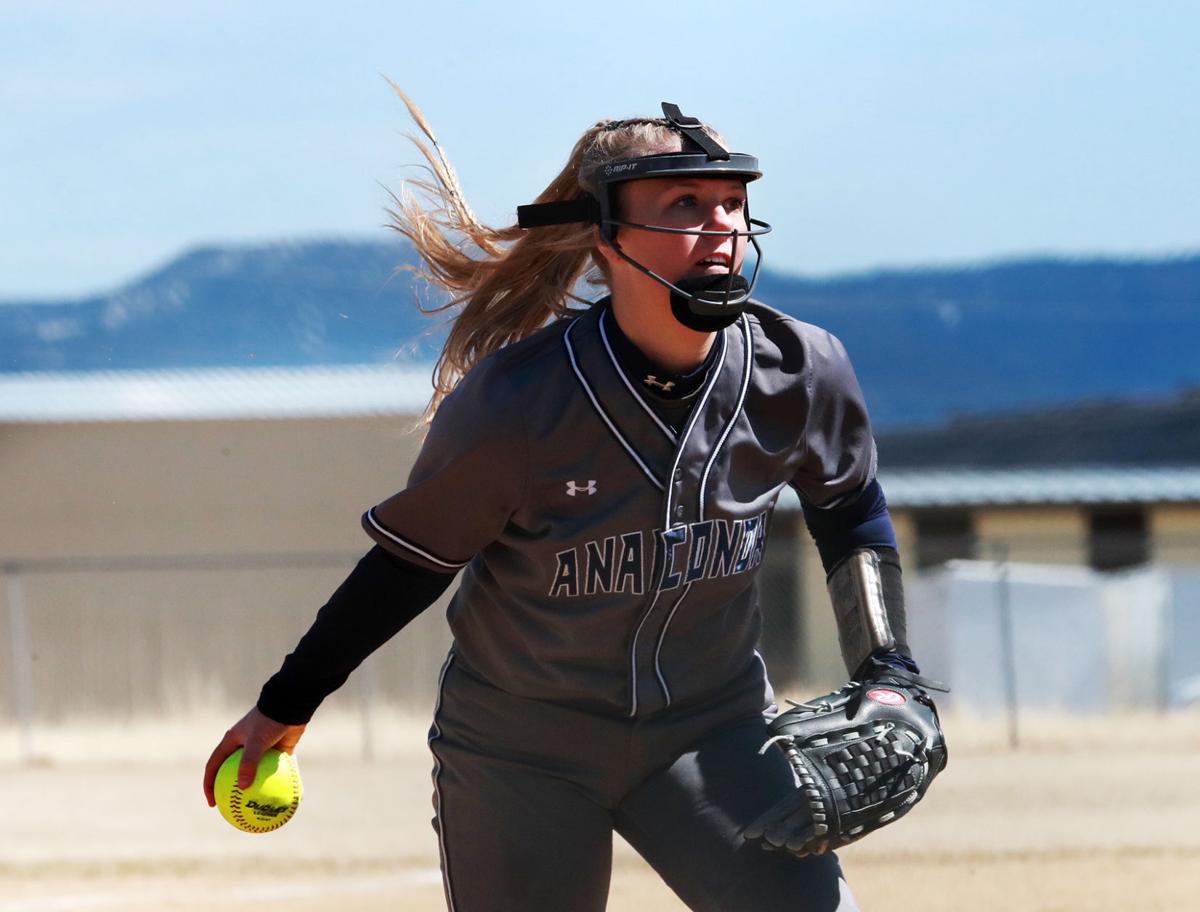 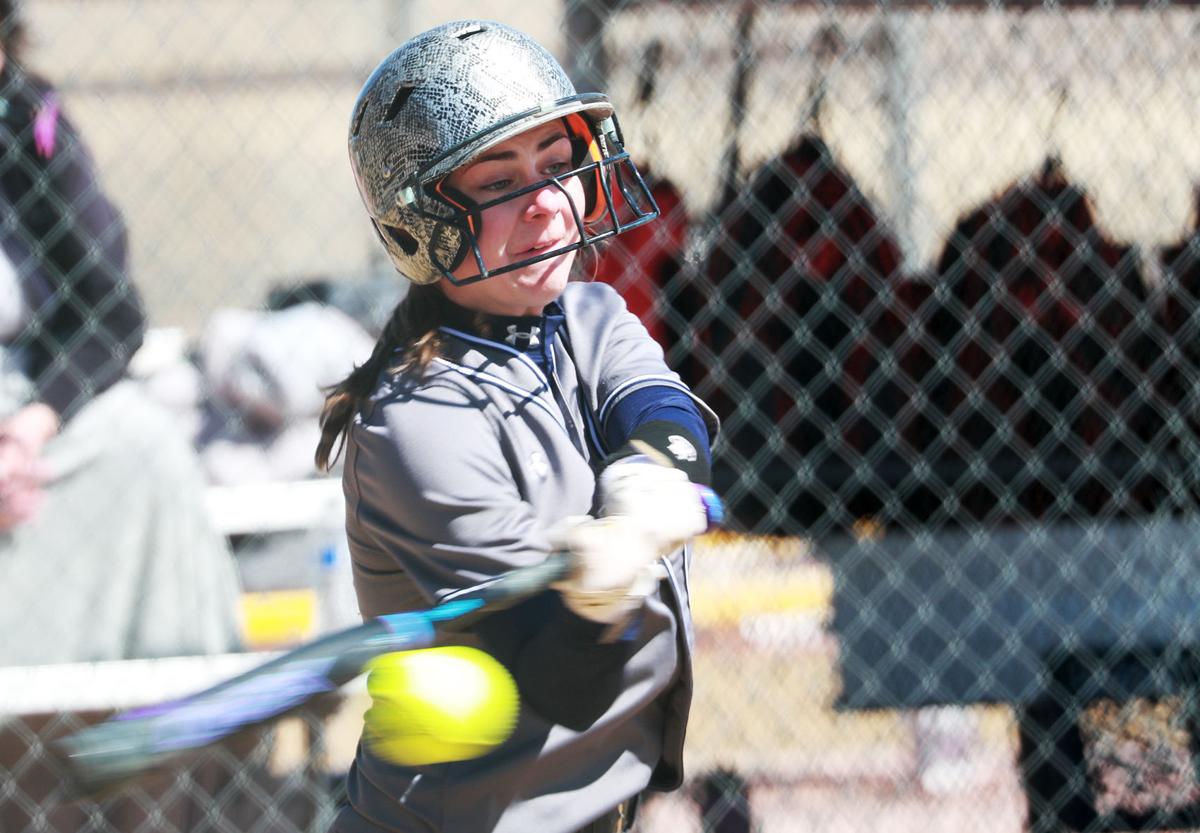 Anaconda's Alyssa Peterson connects with the ball during the Copperheads' home game against Manhattan on Friday afternoon in Anaconda.

Anaconda's Alyssa Peterson connects with the ball during the Copperheads' home game against Manhattan on Friday afternoon in Anaconda.

Down 4-0 in the bottom of the sixth, the Copperheads scoreless drought had reached 12 innings to open the season.

Thanks to a few timely hits and a gutsy bunt, Anaconda came roaring back to defeat Manhattan 7-6 in eight innings Friday in Anaconda for the Copperheads' first win of the season.

The Tigers run-ruled Anaconda 13-3 in the second game, a non-conference tilt.

Manhattan's first hit came in the top of the fourth when Claire Nolan smacked a line drive into left field. After taking second base on a wild pitch, she came around to score the game's first run on a ground-rule double by Adele Didriksen. Mitchell sat down the final two hitters to end the frame.

Nolan would continue to be a thorn in the side of Anaconda. In the top of the fifth she broke the game open with a three-run triple, extending the Tigers' lead to 4-0.

The Copperheads showed signs of life in the bottom half of the fifth, though. Pinch hitter Taryn Coughlin drove a one-out double to the center-field fence. Elgas wiggled her way out of trouble, but a switch had flipped in the Anaconda dugout.

"I think when we put Taryn in, she started that rally, at least seeing that they could hit the ball," Monaco said. "And then after that, they got a taste of hitting the ball and they could see where they needed to go. Once that happened, they started playing better."

Mitchell made quick work of the next three hitters, enabling the Copperheads' bats to get right back to work. In the bottom of the sixth Kadence Lunceford led off with a walk. Alyssa Peterson scorched a liner to left and Cara Fortner reached on a two-hopper up the middle to load the bases. After back-to-back strikeouts, it looked like Elgas might wiggle out of another jam. Coughlin, who in her last at-bat had the longest hit of the afternoon, kept the inning alive with one of the shorter hits of the afternoon; a jam-shot up the third baseline that just stayed fair brought Lunceford home. Peterson scampered home shortly after thanks to an air-mailed pickoff throw to third base. Elgas got Cara Demarios to ground into a force out to end the threat.

Now trailing just 4-2 in the top of the seventh, Mitchell once again sat down the Tigers in order and it was time for the red-hot Anaconda hitters to get back to it.

"They know they can hit, it was just a matter of seeing it," Monaco said.

Johnson reached thanks to a booted ground ball and Mitchell legged out an infield single to start the bottom of the seventh. Both runners advanced on a Lunceford groundout, and Johnson scored on the next play when Peterson grounded out to second. Cara Fortner kept the inning alive with a walk.

With runners on first and third, and two outs, Monaco decided to pull a rabbit out of her hat. With McKayala McKelvy at the dish, the 16-year Copperheads coach put on the bunt sign.

McKelvy executed to perfection, as she deadened a fastball down the third baseline. Everyone was safe and Mitchell scored the tying run.

"I figured we had to do something," Monaco said. "I don't think they were ready for it. You're not thinking, with two outs, that they're going to bunt. And we had to try something."

Into extras they went. The Tigers offense didn't flinch, as they came right back with two runs. Natalie Scott laced a double to left-center and Didriksen brought her home with a ground-rule double. Emma Kabalin brought Didriksen around with a single and Manhattan had control once again, 6-4.

In the bottom of the eighth, Demarios got things started with a one-out walk and immediately stole second. Johnson promptly brought Demarios home with a sharp ground ball to left and it was 6-5. After Johnson took second on a wild pitch and Mitchell walked, Manhattan coach Randy Cygan went to his bullpen and called on Kabalin.

After the pitching change, Lunceford walked and Peterson wore one to load the bases. Fortner worked the count full before watching ball four, giving Anaconda the 7-6 victory.

Mitchell picked up the win for the Copperheads. She pitched all eight innings and struck out 10.

The second game was all Tigers. Manhattan raced out to a 7-0 lead in the first inning, during which Kabalin roped a two-run single.

Kabalin also pitched the final three frames for the Tigers. Cygan was pleased with how she bounced back after the first game.

"We have to get confidence in our pitchers," he said. "They're young. We got Kabalin some game experience in that first game. Once we get our pitchers in better shape we're going to be looking a lot better."

Anaconda heads to Belgrade on Saturday for a doubleheader starting at 10 a.m.