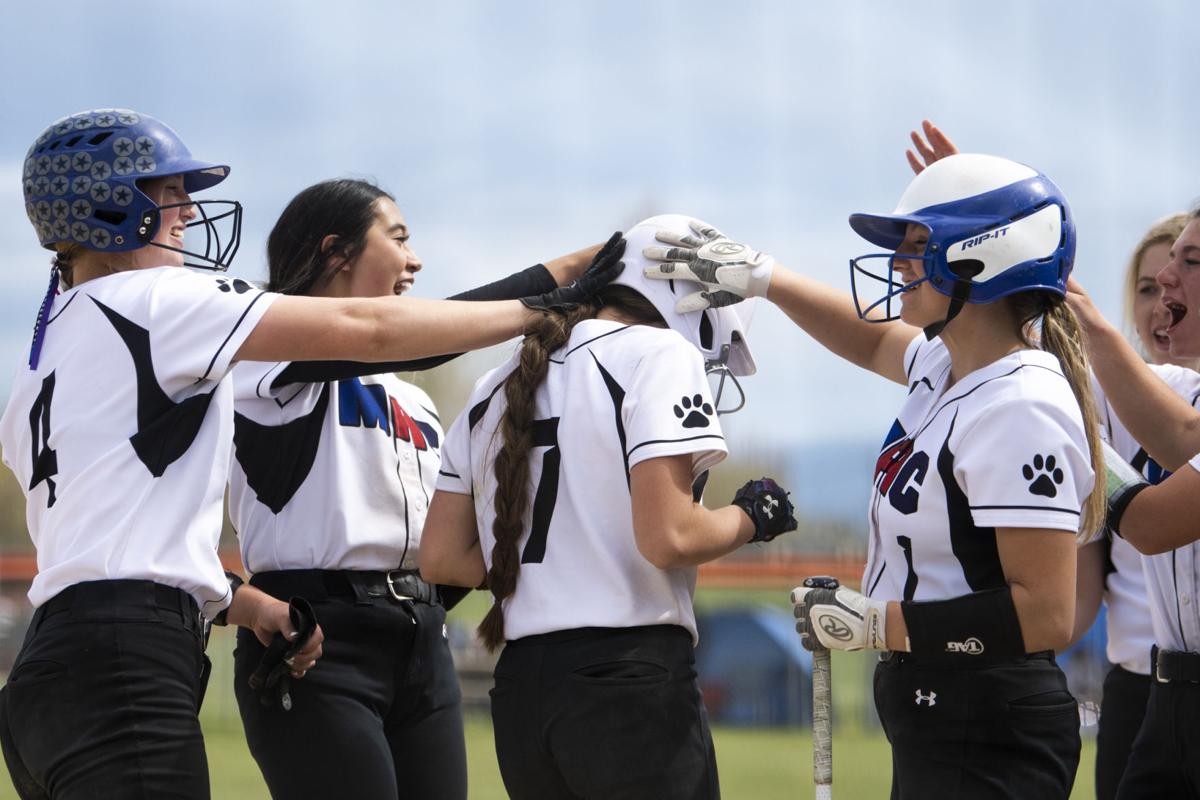 Mission-Arlee-Charlo players celebrate with Hayleigh Smith (7) after her home run during their softball game at Frenchtown Saturday. MAC lost to Columbia Falls, 9-4, but tied Class A powerhouse Polson earlier in the day. 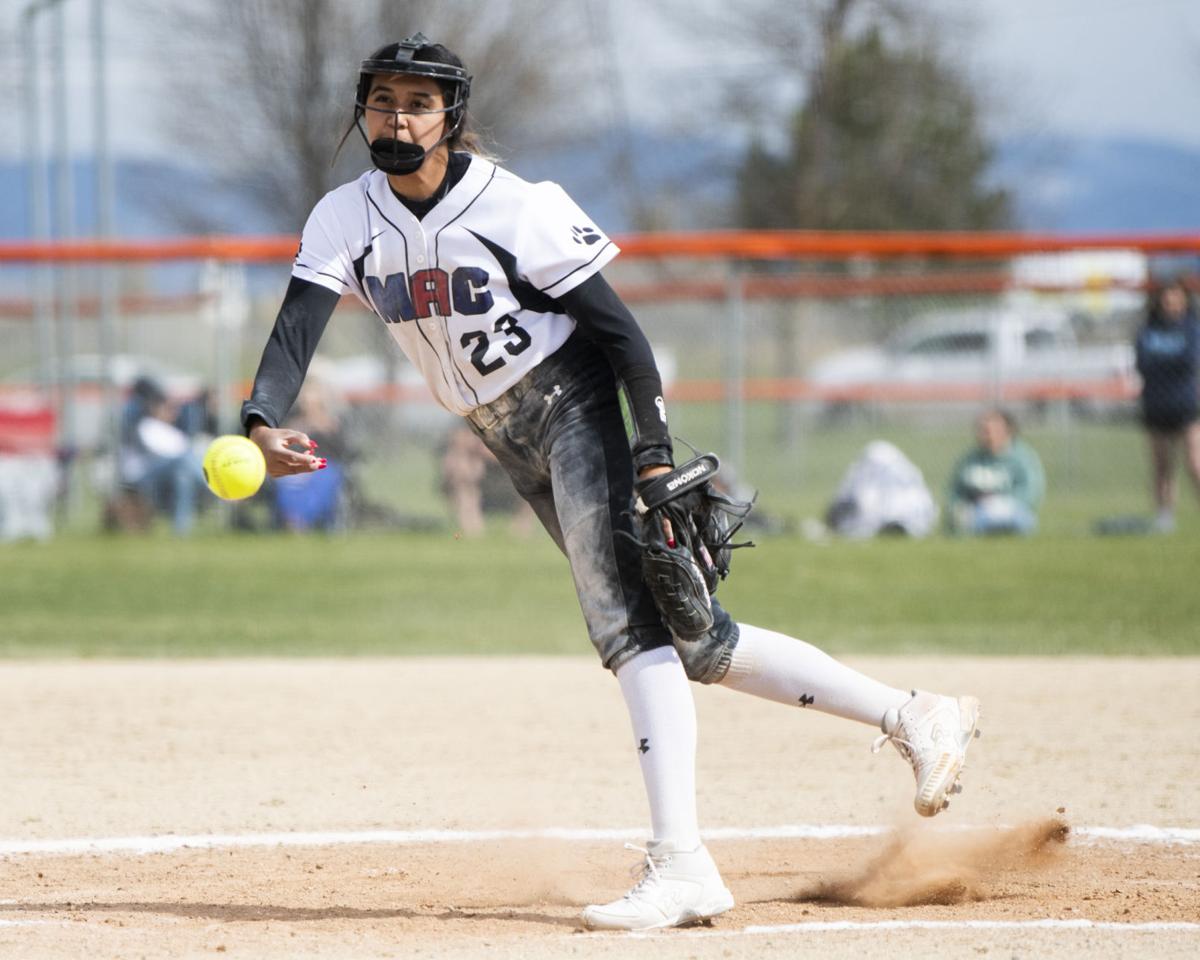 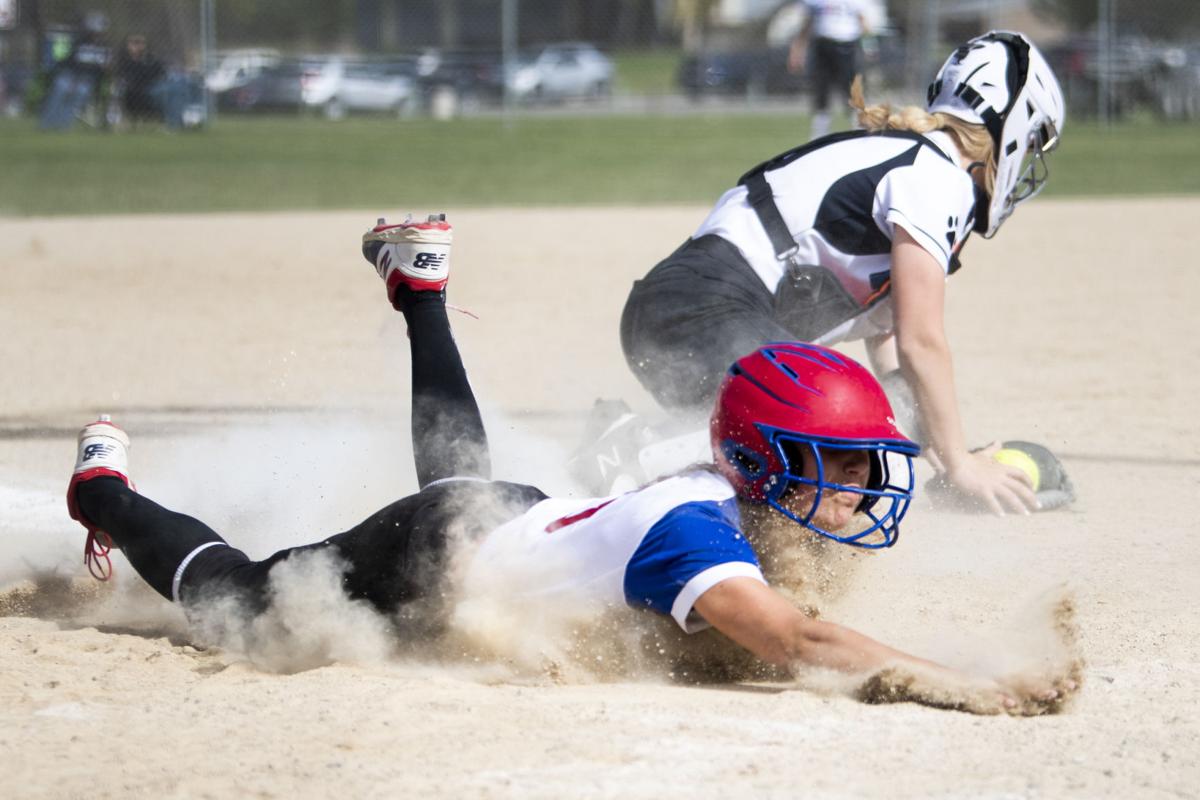 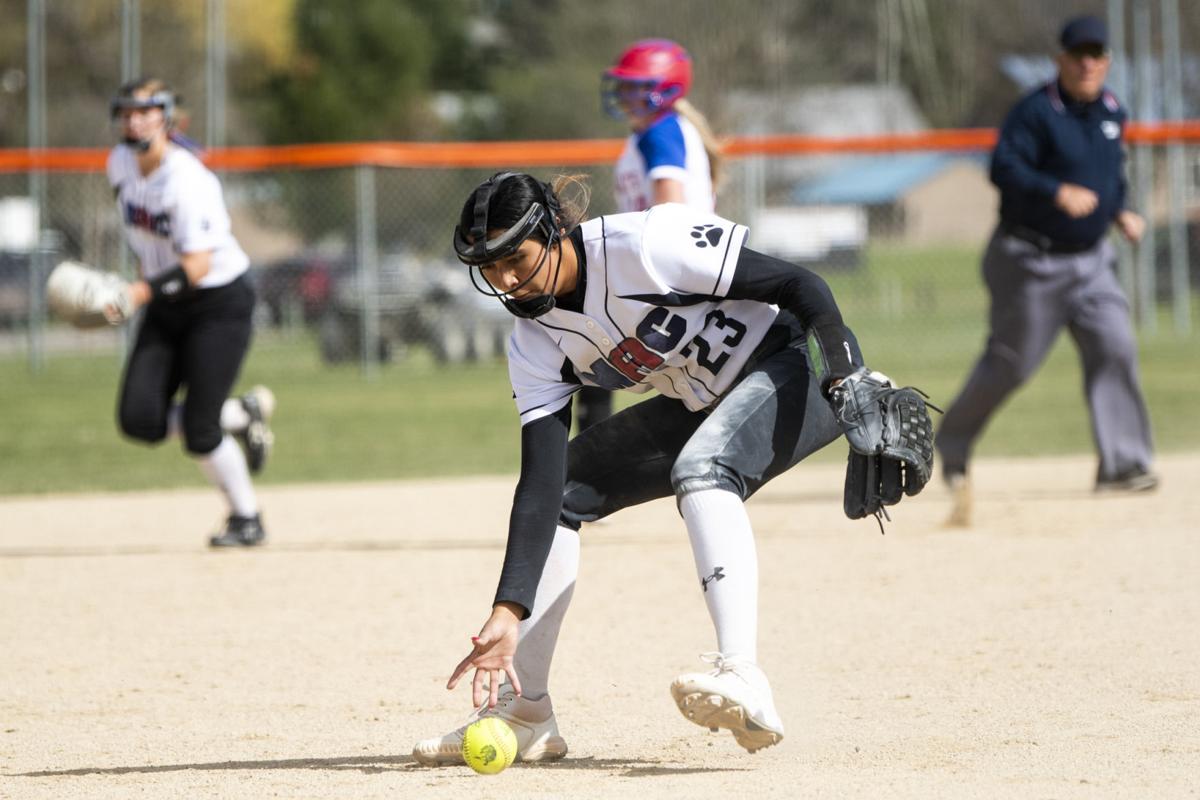 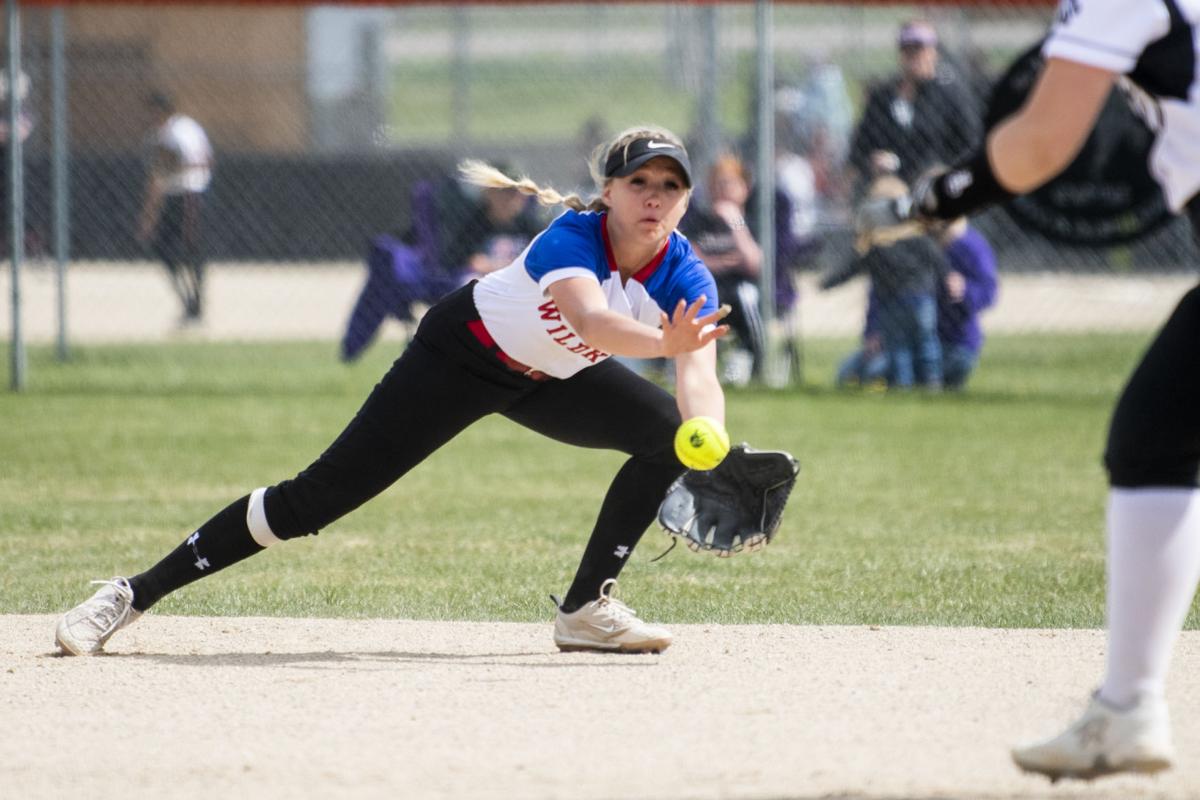 Columbia Falls’ Haylee Lawrence dives for a line drive during their softball game at Frenchtown High School, Saturday, May 1, 2021. 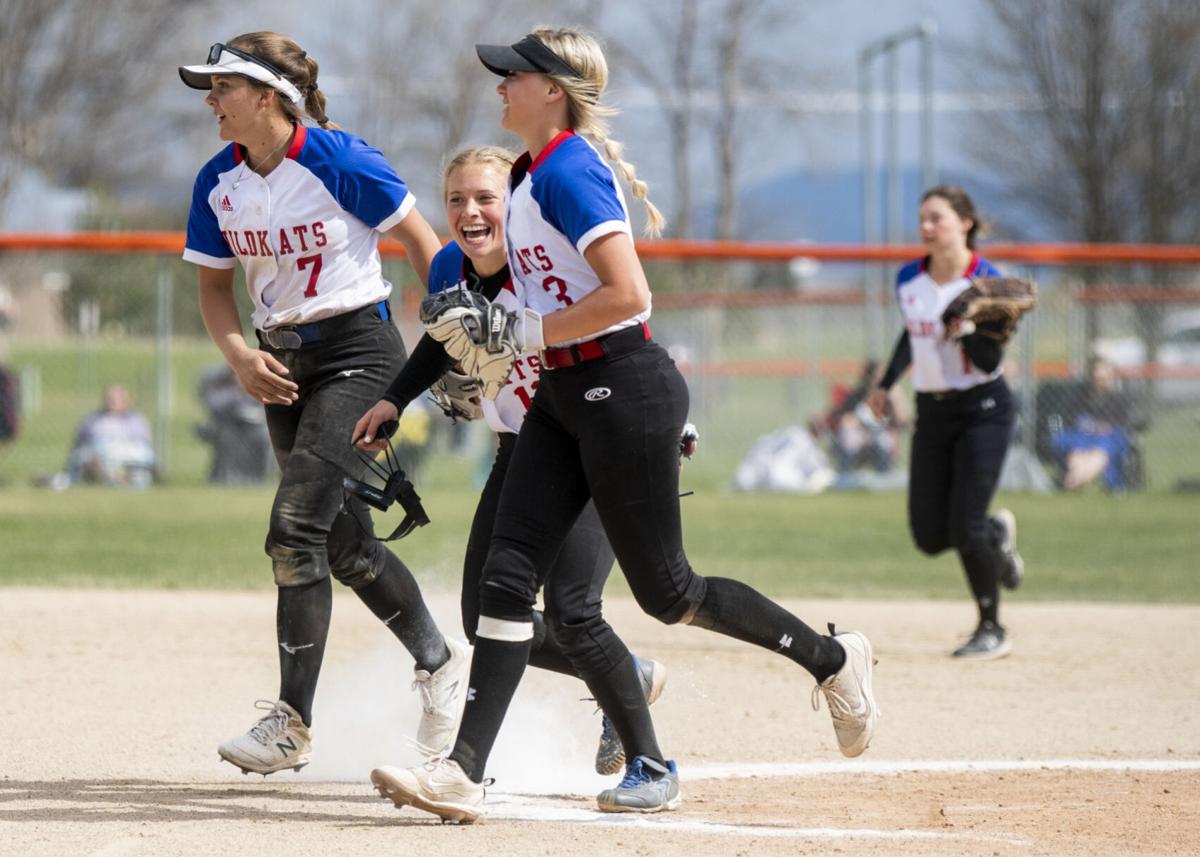 The Wildkats celebrate after three outs during their softball game at Frenchtown High School, Saturday, May 1, 2021. 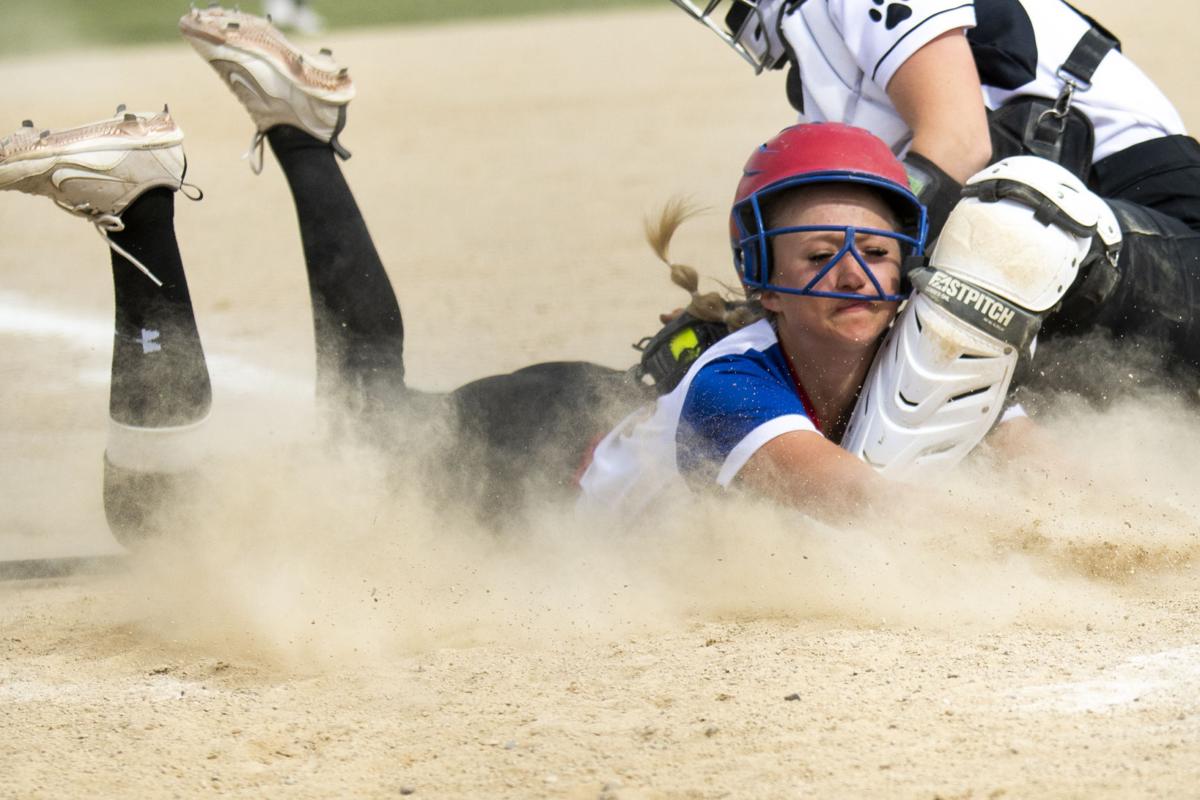 Columbia Falls runner gets tagged out at home during their softball game at Frenchtown High School, Saturday, May 1, 2021. 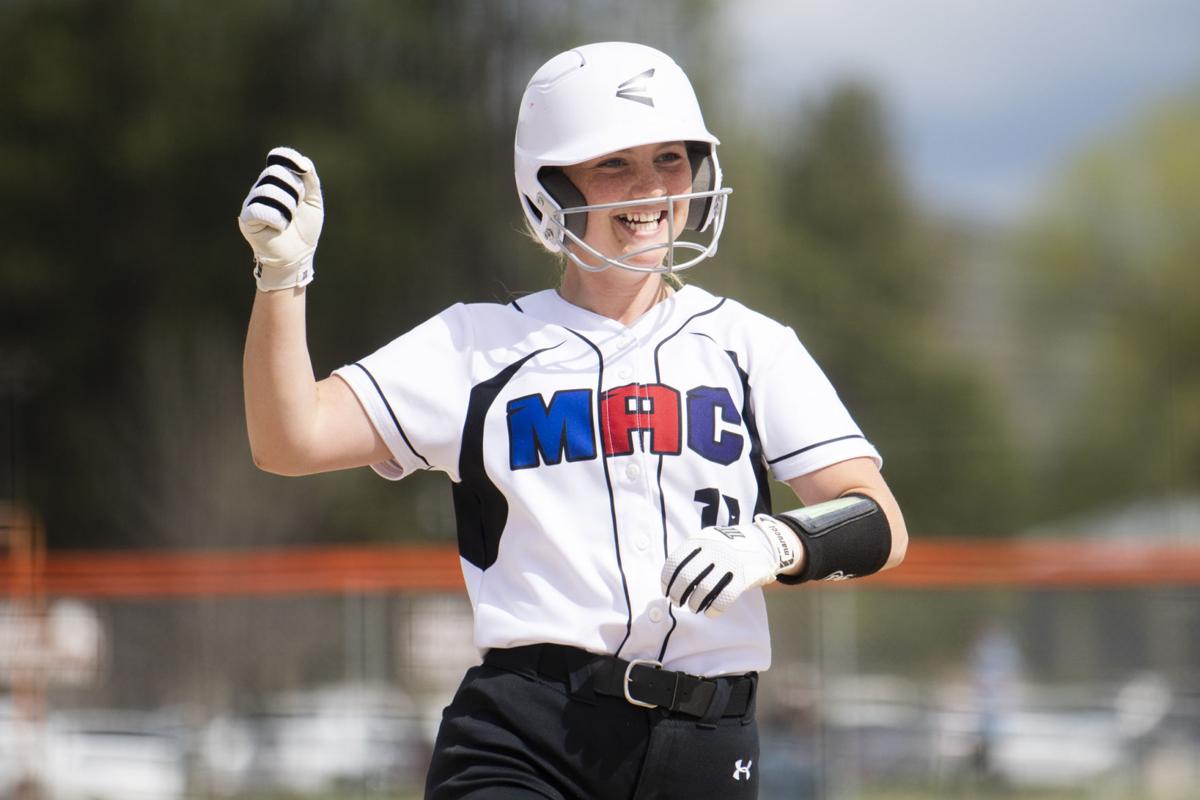 MAC’s Kate Young cheers as she crosses home plate after hitting a home run during their softball game at Frenchtown High School, Saturday, May 1, 2021.

Mission-Arlee-Charlo players celebrate with Hayleigh Smith (7) after her home run during their softball game at Frenchtown Saturday. MAC lost to Columbia Falls, 9-4, but tied Class A powerhouse Polson earlier in the day.

Columbia Falls’ Haylee Lawrence dives for a line drive during their softball game at Frenchtown High School, Saturday, May 1, 2021.

The Wildkats celebrate after three outs during their softball game at Frenchtown High School, Saturday, May 1, 2021.

Columbia Falls runner gets tagged out at home during their softball game at Frenchtown High School, Saturday, May 1, 2021.

MAC’s Kate Young cheers as she crosses home plate after hitting a home run during their softball game at Frenchtown High School, Saturday, May 1, 2021.

MISSOULA — Kooper Page did what no other pitcher has been able to do this season: She contained a potent Polson offense on Saturday afternoon at the Frenchtown Invitational.

The Mission-Arlee-Charlo sophomore gave up just two runs in a complete-game performance as the Class B/C Bulldogs played to a 2-2 tie against the Class A Pirates, a veteran team that had entered the game with an 11-0 record and is expected to be competing for a state title. It was another example of the youthful MAC squad playing above its age and increasing expectations.

The upstart Bulldogs are 13-2-1 but aren’t experiencing the success by playing just poor competition either, although their conference isn’t chock full of heavyweights. They’ve gone out of the league and taken on bigger foes, going 5-1-1 against Class A teams so far.

“It was a pretty intense game,” MAC coach Shane Reum said. “I’m happy that our girls rose to the occasion. I’m happy with where we’re at as a team.”

MAC is a rather young squad with one senior, one junior, six sophomores and one freshman in its normal starting lineup. Add in the fact that last season was canceled by the pandemic, and that means only one player on the team had played in a high school game before this year. And they have a coach in his second year but first season leading the team.

Yet, the team is made up of a large contingent of girls who grew up playing travel softball with the Montana Avalanche over the years. They even got to play last summer with the Avalanche and/or with the travel team Reum ran that summer, Mission Valley Velocity, so they didn’t miss out on an entire year of their development and came into the spring feeling they were more ready to go than some other teams they’ve faced because they saw quality pitching.

“We haven’t even peaked yet, but it’s coming,” said Liev Smith, the lone senior on the team. “We’re really young, and we lack experience, but we work hard. We know we can do it because a lot of them have played club, played over the summer, so they have that experience.”

Page has been the ace of a staff that’s given up only 40 runs through 16 games, 25% of which came in MAC’s lone Class B/C loss, 10-5 to perennial powerhouse Florence. She’s backed up by Smith and some younger players who are still looking for more varsity experience as the Bulldogs have routinely won by the run-rule and haven’t had to play many seven-inning games.

Against Polson, Page locked up an offense that’s averaging over 10 runs per game as she struck out 12 batters in eight innings by painting the corners and mixing in a nasty changeup. Her defense behind her was highlighted by Smith turning an unassisted double play at shortstop with runners on second and third with no outs. The lone runs she gave up came on a two-run home run by Lexy Orien in the sixth inning.

“Kooper Page is a very good pitcher. We haven’t seen that yet,” Polson coach Jami Hanson said. “She’s a good pitcher. She throws well. She spins the ball well. That’s what it’s about. I thought she threw a gem. She threw very well, kept our hitters off balance.”

MAC’s offense came into the day having outscored teams 235-29 in 14 games behind the young core of athletic, speedy players. Seven starters are hitting .415 or better as they're not afraid to swing the bats and be aggressive on the base paths.

Freshman Izzy Evans leads with four home runs and 23 RBIs. Sophomores Jerny Crawford and Rheid Crawford are close behind with three homers each and 15 and 20 RBIs, respectively. Sophomore Hayleigh Smith leads the team with 48 runs scored, while Liev Smith is second with 35.

The Bulldogs were challenged by veteran pitcher Katelyne Druyvestein, who was pitching her fourth game in two days. They collected seven hits and scored two unearned runs on back-to-back doubles after a two-out error. For Liev Smith, who had one of the two RBI doubles, the tie against an A team of Polson’s caliber was almost like a win.

“It was really exciting,” she said. “Being a B/C school, we felt we had nothing to lose, so we went out there being super aggressive.”

MAC turned around about 20 minutes later for a game against Class A Columbia Falls. The Bulldogs lost 9-4 but were missing one starter who left with an injury and two starters who left for Arlee’s prom.

Reum also felt they were on too much of a high from the Polson game and lost their energy level in the second game. That’s something they can learn from going forward because they’ll have to make those quick turnarounds at the divisional and state tournaments.

“We had already set our expectations high,” Reum said. “We also know we have a lot of stuff to work on, so now we’ve got to go back to the drawing board and adjust some things.”

After seeing MAC, Hanson anticipates the Bulldogs being there competing for a state title later this month, just like he does with his team.

“I expect both of us to come out on top at the end of this season,” he said. “I think that’ll say something about what we have in the Mission Valley.”

The Polson Pirates are cruising along this season as they're unbeaten midway through the softball season while chasing a state championship.