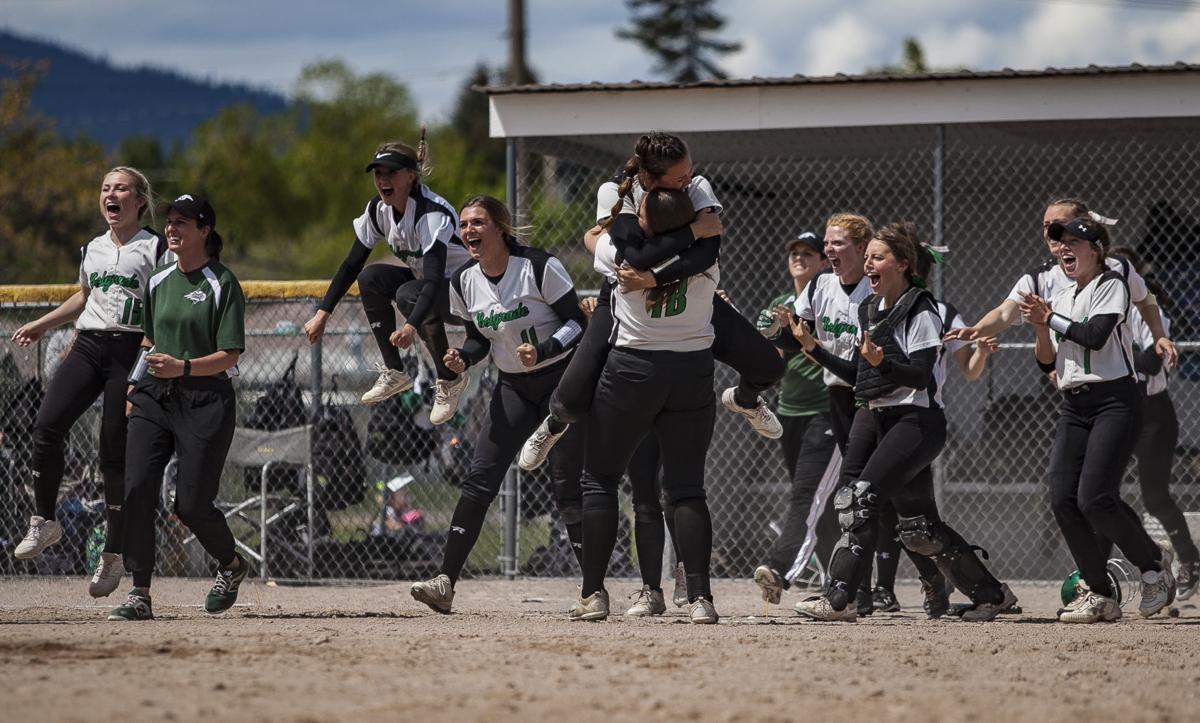 Belgrade's softball team runs out of the dugout to celebrate their win over Polson in the State A championship game on Saturday afternoon in Polson. 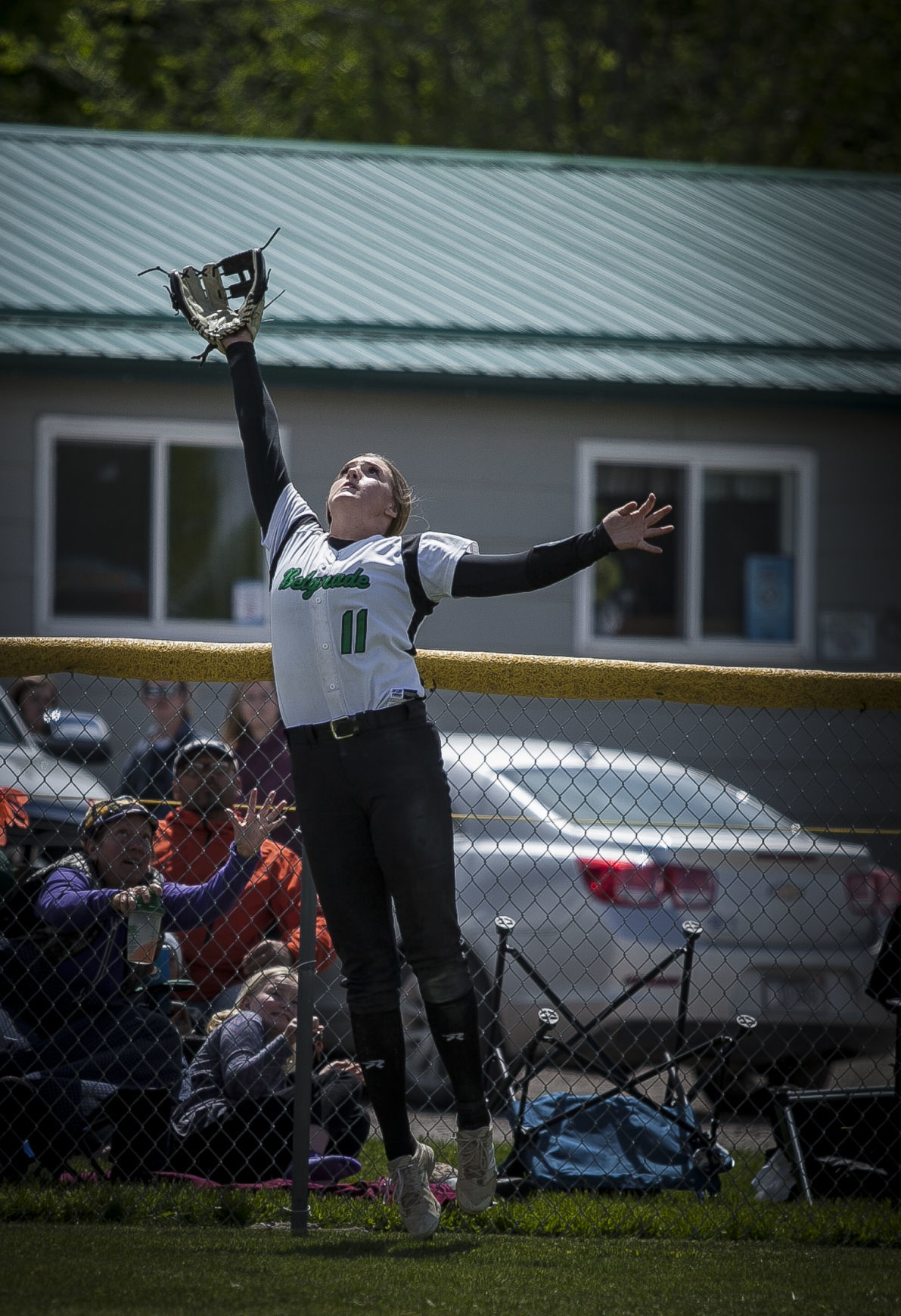 Belgrade's Madi Krieger leaps, watching the ball fall into her glove. Krieger caught the ball over the fence, preventing Polson from hitting what would have been a home run during the final inning of the game.

Belgrade's softball team runs out of the dugout to celebrate their win over Polson in the State A championship game on Saturday afternoon in Polson.

Belgrade's Madi Krieger leaps, watching the ball fall into her glove. Krieger caught the ball over the fence, preventing Polson from hitting what would have been a home run during the final inning of the game.

POLSON — Belgrade went out with a bang.

The Panthers capped their final softball season in Class A with a third consecutive state championship and a 23-0 record, beating Polson 11-1 in five innings in the title game on Saturday.

“It’s definitely the best day of the year,” Belgrade senior pitcher Erin Elgas said while fighting back tears. “The seniors, we’ve all been playing with each other since we were 8 years old. To finish Class A, to finish undefeated and to finish on top, it’s just incredible how we went out this season.”

Belgrade’s offense provided the pop while Elgas, the state tournament MVP, kept the Pirates’ offense at bay. The Panthers collected 13 hits in 25 at-bats and busted open the game with a seven-run second inning, highlighted by Olivia Cook’s two-run home run that cleared the street behind the left-field fence. They added four consecutive RBI base hits in the fifth inning to win in walk-off fashion via the run rule.

It was the third time in four tournament games Belgrade scored in double figures. The Panthers beat Hamilton 10-3 in the undefeated final earlier in the day to reach the championship game.

“We talked beforehand about having opportunities to make a statement, opportunities to change the game,” Belgrade coach Andrea Folkman said. “We had everybody contribute, which just speaks to the team effort. It’s huge for the program. It really solidifies that we have people who can step up, any age.”

Elgas, a Brown University softball signee, allowed just five baserunners in five innings. She struck out six to finish the tournament with 42 in four games, which Folkman said tied the record for strikeouts in the tournament.

“She was outstanding,” Folkman said. “Complete domination. She left a legacy. She was fearless.”

Elgas got help from her defense behind her, like second baseman Lanie Morgan, who finished the season without committing an error, according to Folkman. Left fielder Madi Krieger had arguably the top defensive highlight of the tournament. The 6-foot-1 Krieger robbed Kallie Finkbeiner of a home run in the top of the fifth inning to preserve Belgrade’s 7-1 lead.

“She’s always told me, ‘I’m going to get those home runs for you. I’m going to save you,’” Elgas said of her teammate of 10 years. “She finally did. The last time we’ll ever play together, she did it for me. That was just the best feeling. I jumped so high.”

Krieger, Cook and Morgan were named to the all-tournament team for Belgrade, which loses seven seniors as it transitions to Class AA next season. Kamie Gorrell and Ellie Milesnick made the honorable mention list.

While Belgrade celebrated, some Polson players shed tears, but there was also a sense of accomplishment about what the Pirates did.

Polson, under the direction of a new head coach and with just four seniors, navigated its way past a day-two loss to finish in second place. It marked the Pirates’ best showing at state since 2013, when they also were the runner-up.

“They’ve never stopped all year,” Polson coach Jamie Hanson said of his team, which also won the Northwest A regular-season title and finished the season 21-6. “Every day, it doesn’t matter who they were playing, they came to compete. That’s what I’m going to remember about this team and what they were capable of.”

Polson had to win three games in 18 hours across Friday night and Saturday morning just to make the championship game. They run-ruled Columbia Falls, topped Frenchtown in extra innings after blowing the lead in the seventh and advanced to the finals by avenging their first tournament loss with a 6-2 win over Hamilton.

It was a different story against Belgrade, which limited Polson to three hits and one run.

“Their pitcher, she can pump up and blow it by anybody,” Hanson said. “The thing is, though, I thought we swung well. We gave ourselves some opportunities. We just didn’t capitalize. Tip my hat to Belgrade.”

Polson freshman Katelyne Druyvestein collected the lone RBI by legging out an infield single that scored Lexy Orien with two outs in the fourth inning and cut Belgrade’s lead to 7-1. When Finkbeiner was robbed of a home run in the fifth inning, it stalled any chance of a comeback.

Polson senior Lauren Vergeront, who returned to softball this season after two years away, already had thrown 10 innings on Saturday before Belgrade struck for seven runs off of her in the second inning. The Panthers sent 11 batters to the plate and took advantage of an error to score five unearned runs.

“Every year, you have to say goodbye to some girls, and this group of seniors is outstanding,” Hanson said of Vergeront, DesJarlais, first baseman Paige Noyes and right fielder Lisa Costilla. “All great leaders. They gave it everything they had both on and off the field. They definitely left their mark on this team and this program. I’m very proud of them.”

Polson’s final task in trying to qualify for the title game was avenging Friday’s 2-1 loss to Hamilton. The Pirates did that in the loser-takes-third game, posting a 6-2 win that required a pressure-packed relief appearance by Vergeront.

With Polson clinging to a 3-2 in the fifth inning, Vergeront was called in with one out, the bases loaded and Hamilton’s No. 3 and 4 batters due up. She proceeded to get Mikayln Brickley to pop out and Jorden Taggart to ground out as the Pirates escaped the frame.

“Mainly, I was thinking, ‘I’ve been through worse, I’ve been under more pressure, so I can do this,’ Vergeront said. “That’s mainly what got me through, and having faith in my defense to back me up.”

Vergeront didn’t allow a run in 2 2/3 innings, and Polson scored once in the fifth and twice in the sixth to extend its lead. It was the Pirates’ third consecutive win after a Friday loss, a run that required all phases coming together to reach the title game.

“Just confidence with our bats, with our defense, everything,” Caye said. “Knowing we can come back to the championship and compete.”

Hamilton took third place and finished the season 19-5-2 after graduating eight seniors from last year’s second-place team. Taggart and Sophia Doyle were named to the all-tournament team, while Brickley was an honorable mention.

“It was just willpower,” Hamilton coach Dave Kearns said. “There's a lot of teams that didn't think we'd be back in this situation. We started rough, but we played day by day. Shoot, 19 wins in a season is not too bad.”

Polson’s Kobbey Smith played the hero in the loser-takes-fourth game against Frenchtown. The sophomore hit a walk-off home run in the bottom of the eighth inning to lift the Pirates to a 7-6 win in their first game on Saturday.

"I was looking straight down the middle and a little low — that’s my pitch," Smith said. "Yep, I was definitely swinging for it."

Smith’s heroics were needed after Polson blew the lead in the top of the seventh inning. The Broncs rallied for four runs to take a 6-5 lead. All three of their run-scoring hits came with two outs as Layne Bauer had an RBI double, Taylor Garren tagged an RBI single and Hailey Arthur collected a two-run single.

Caye tied the game, 6-6, in the bottom of the seventh with an RBI double that scored Finkbeiner. The Pirates loaded the bases, but Frenchtown pitcher Claire Bagnell got back-to-back pop outs to send the game to extras.

"It was tough when they came back, but we gave ourselves a head check and came back ourselves to rally," Smith said.

Frenchtown finished the season 17-8, and its streak of 15 consecutive top-3 finishes at state, including 14 straight under head coach Eli Field, was snapped. Bagnell made the all-tournament team's honorable mention list.

"Claire was awesome all weekend, and she’s a hell of a player and a hell of a competitor," Field said. "She (came up to me and said) sorry about the streak. I said, 'It’s not about me.' Any streak weighs on your mind, and it’s OK. We’ve been lucky; we’ve been deserving. But that’s who they are.

"These things matter, and we have such a mutual, I think, love for each other that these things matter. They got to understand that it’s not about that. It’s about who you are when it’s all said and done."

Belgrade scored in five of six innings on its way to a 10-3 win over Hamilton in the undefeated final to earn a spot in the title game. Olivia Cook and Ellie Milesnick each hit a home run and had two RBIs.

Hamilton managed five hits off of Elgas. Phoebe Howard had two hits and one RBI.

Kyle Houghtaling contributed to this article.