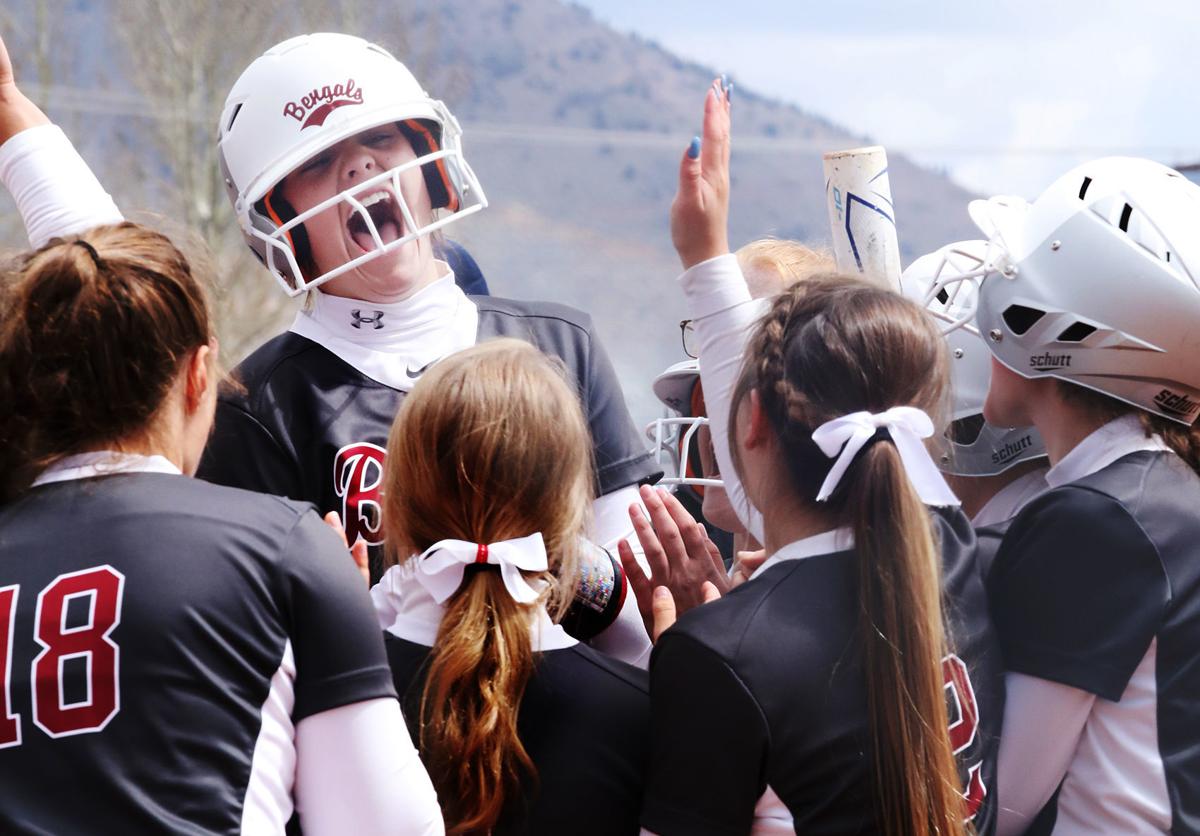 Helena High's Riley Thennis celebrates with her team after hitting a home run on Friday morning during the 2019 State Class AA Softball Tournament in Butte. 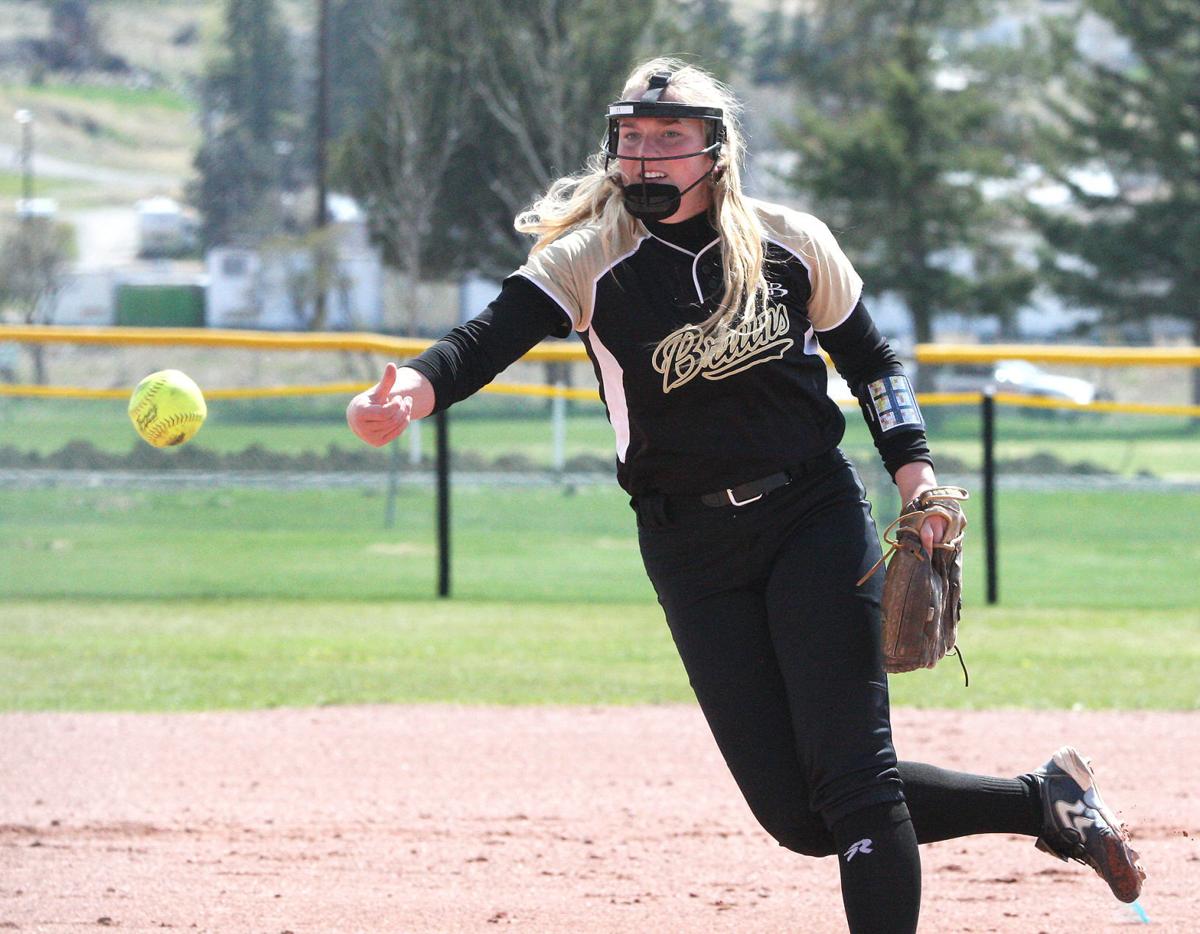 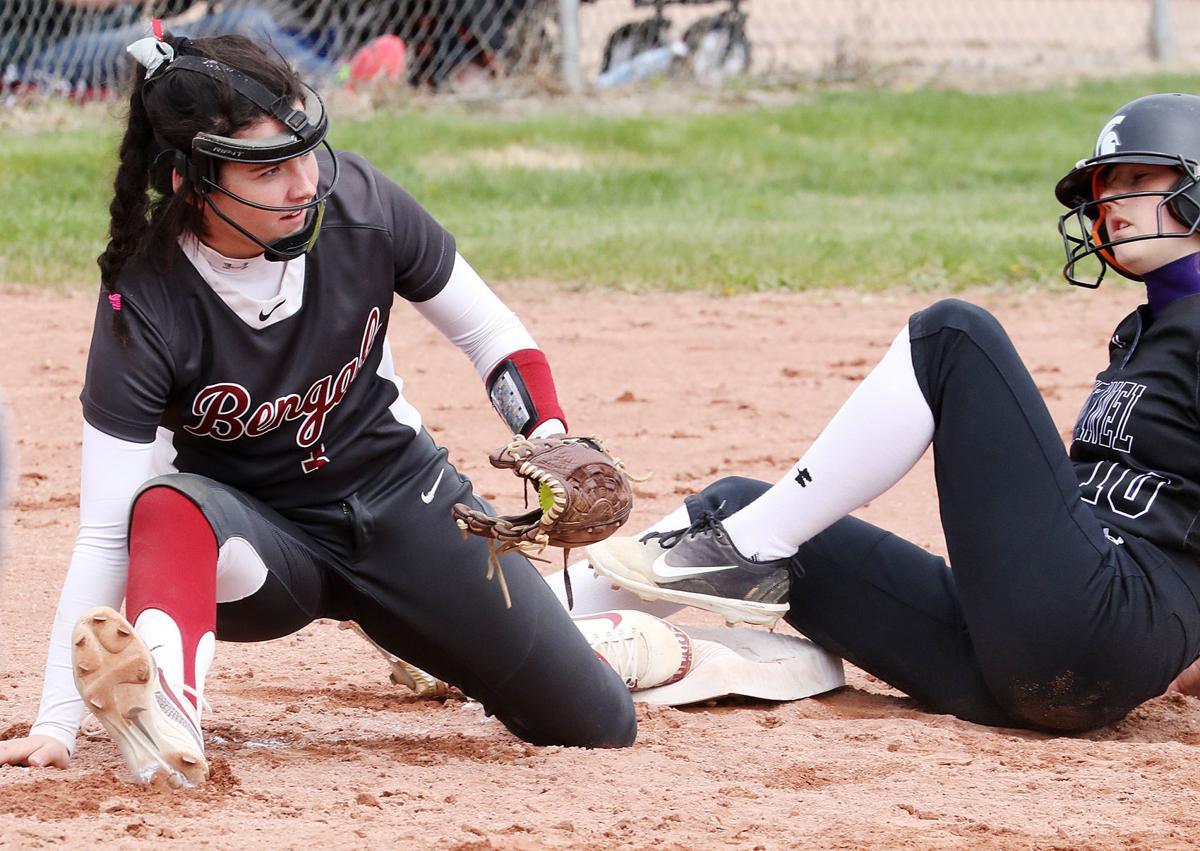 Helena's Vanessa Walsh makes an out at third base on Friday morning during the 2019 State Class AA Softball Tournament in Butte. 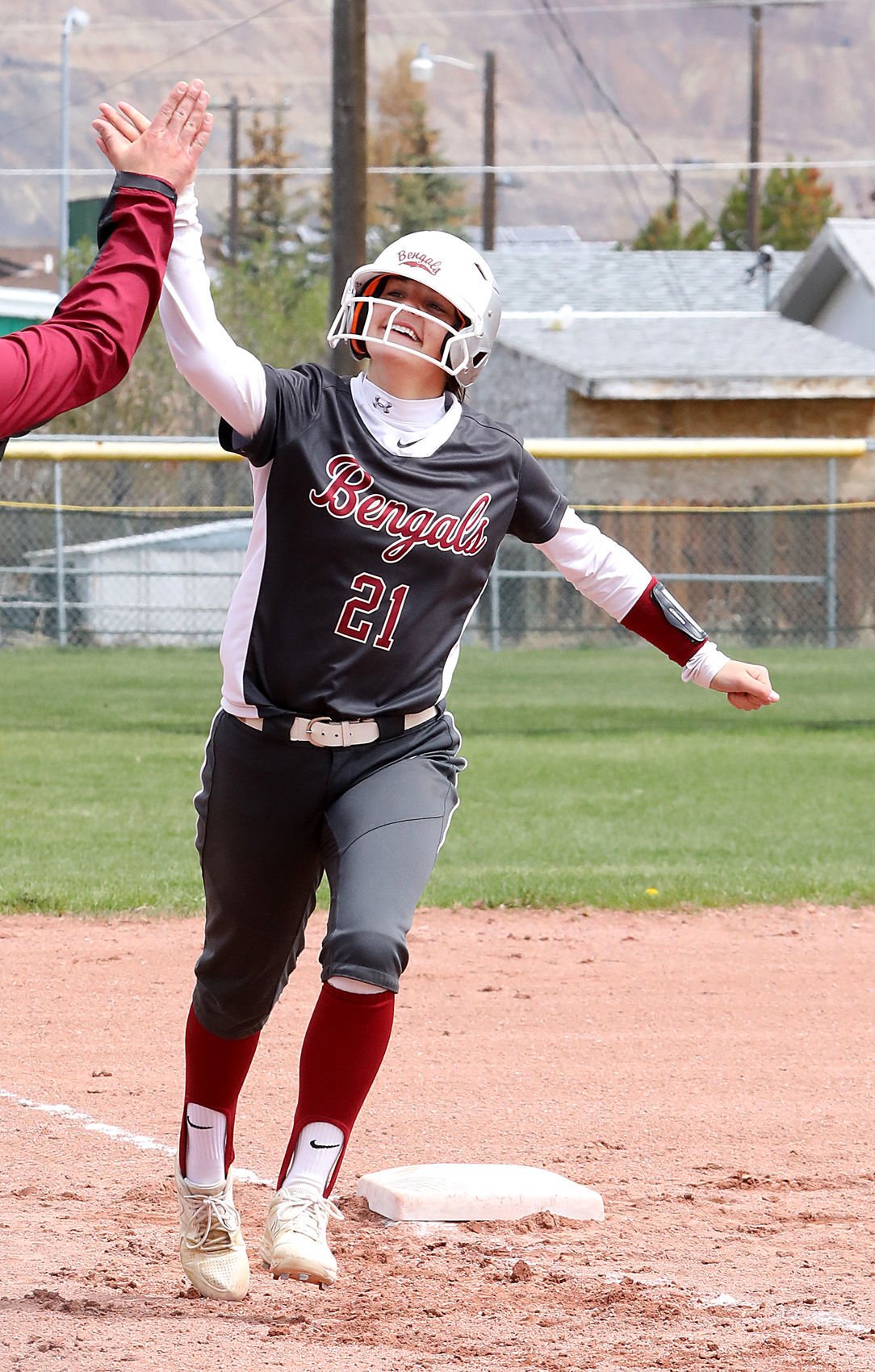 Helena High's Riley Thennis gets a high-five from her coach as she rounds third base after hitting a home run on Friday morning during the 2019 State Class AA Softball Tournament in Butte.

Helena High's Riley Thennis celebrates with her team after hitting a home run on Friday morning during the 2019 State Class AA Softball Tournament in Butte.

Helena's Vanessa Walsh makes an out at third base on Friday morning during the 2019 State Class AA Softball Tournament in Butte.

Helena High's Riley Thennis gets a high-five from her coach as she rounds third base after hitting a home run on Friday morning during the 2019 State Class AA Softball Tournament in Butte.

BUTTE — If you ask Billings Senior High softball coach Lisa Shulund to describe her third baseman, sophomore Kara Conway, she will give you a straight answer.

But nothing was timid about Conway's final plate appearance against Great Falls in the undefeated semifinal game during the Class AA State Softball Tournament at Stodden Park on Friday afternoon.

On a 3-2 pitch, Conway belted a three-run home run to defeat the Bison 8-5. It was only the second loss Great Falls has suffered this season.

Senior came in as the West Division’s No. 4 seed, but its offense has not been playing like it.

Fresh off of a 10-2 romping of Helena Capital this morning, the Broncs’ bats stayed hot during the first two innings against Great Falls.

Great Falls quickly made a pitching change that cooled off the offense.

Junior Anna Toon pitched the next four innings giving up no runs. The only problem was the Bison offense could not wake up.

After Rachel Porter hit a solo shot to cut into the five-run deficit, the bats were quiet as Senior pitcher Kennedy Venner gave up just one hit over the next three frames.

Things changed for Great Falls in the top of the seventh inning as the Bison plated four runs, highlighted by a three-run home run by Sarah Conway.

“We competed and I’m proud of my team for that,” Toon said.

Finally, Senior’s Kara Conway stepped up to the plate.

“I was actually nervous stepping in there,” she said. “After I hit it, I was really excited.”

The win sends Senior to the title game and Shulund feels pretty confident for tomorrow, especially since they have to lose two games in a row to get knocked off.

“It’s nice, but it can also be a downfall if your opponent is coming in with momentum,” Shulund said. “We just need to put together one solid game."

Senior plays for the title at 11 a.m. Saturday. The opponent will be the winner of the Billings West and Great Falls game at 9 a.m.

The Broncs hit a solo home run in the first inning by Lauren Gordon, followed by right fielder Allison Nyquist lacing a two-run double to make the score 3-0.

Capital scored two runs in the third inning, highlighted with an RBI-single by Mashaysla O’Malley, but that was all it could get.

The Broncs scored in the fourth, fifth and sixth innings to come away with the win.

Jensen Keller finished 2-for-4 with a double and two RBIs, while Nyquist was 2-for-2 with three RBIs.

“Capital is notorious for being a good program, but my girls went in with confidence,” Shulund said. “I feel like this team is just going to go out, put everything behind them and just play softball.”

Great Falls continued its offense onslaught in a 10-0 win over Billings West in five innings. The Bison scored two in the first inning, followed by four more runs in the second inning.

Great Falls finally put the game away in the top of the fifth inning when it scored three more runs. Toon was also nearly untouchable in the circle as she gave up just one hit and struck out five in the win.

“It’s totally awesome, these girls back me up when I’m in the circle,” Toon said. “Our offense is great.”

Helena rebounded from yesterday’s loss to Great Falls with a much-needed 12-7 win over Missoula Sentinel.

The Spartans’ pitching struggled as the Bengals flexed their home run power right from the start.

Later in the inning, the Bengals added four more runs on a grand slam by Reilly Thennis.

“Beating (Sentinel) was one of our goals, since they swept us in the regular season,” Helena coach Ryan Schulte said. “It was really important that these seniors got that win.”

Despite digging itself a giant hole, Sentinel didn’t give up trying to claw back.

The Spartans answered with four runs in the third inning when Addy Gaub hit an RBI single that was followed by a two-run single by Jalen Cooper.

Sentinel added two more runs in the sixth inning, but their rally came up short and their season ended.

Helena Capital and Helena renewed the crosstown rivalry when they met up for the third time this season, but the Bruins had their way after winning 11-0 in five innings.

Helena gave its ace pitcher Mariah English two innings off because of how much she has pitched, and Capital took advantage of the opportunity.

The Bruins scored five runs in the first inning that included a two-run single by Maddie Davis, and then added four more runs in second inning with RBIs by Sara Bury, Kendall Isaacson and Jenna Priddy.

Helena had a chance to dig into its deficit with runners in scoring position in the fourth and fifth innings, but they couldn’t muster any runs across.

Kalispell Glacier got some redemption from yesterday’s loss to Billings Senior after it defeated Billings Skyview 10-5.

The Wolfpack started the game scoring two runs in the first inning that included a home run by Sammie Labaum followed by one more run in the second inning.

Skyview answered by scoring all of five of its runs in the fourth inning, but that wasn’t enough to keep Kalispell at bay.

The Wolfpack scored five runs of its own in the fifth inning, which would ultimately give them the win.

Labaum finished with a pair of doubles and a single, while Megan Eckart was 3-for-4 with three singles. For Skyview, Jessie Ellis was also 3-for-4 with a home run.

Billings West gained some momentum when it advanced to the next round with a 5-2 win over Kalispell Glacier.

The Bears took a 5-0 lead when they scored two runs in the second inning followed by a run in the third inning, and then two more in the fourth inning on Lauren Blaschak and Chloe Nelson doubles.

Glacier tried to attempt a comeback with two runs in the fifth inning, but that fell short and its season ended.

Billings moved on to face Helena Capital with a spot in the third place game on the line.

Billings West advanced to the third place game and a rematch with Great Falls at 9 a.m. on Saturday with a little help from a big hit by Deven Creech. Creech belted a three-run home run that proved to be the difference in a 4-2 win over Helena Capital.

The Bruins tried to mount a comeback when they scored single runs in the second and fourth innings, but they came up short to finish fourth.

“Our girls hung in there,” Capital coach Mike Miller said. “I couldn’t be any prouder of them.”

And, of course, Ames left them with some parting words.

“You have to play every second like it’s your last, because it comes pretty quickly,” she said.

Photos from the second day of the State AA state softball tournament at Stodden Park in Butte.