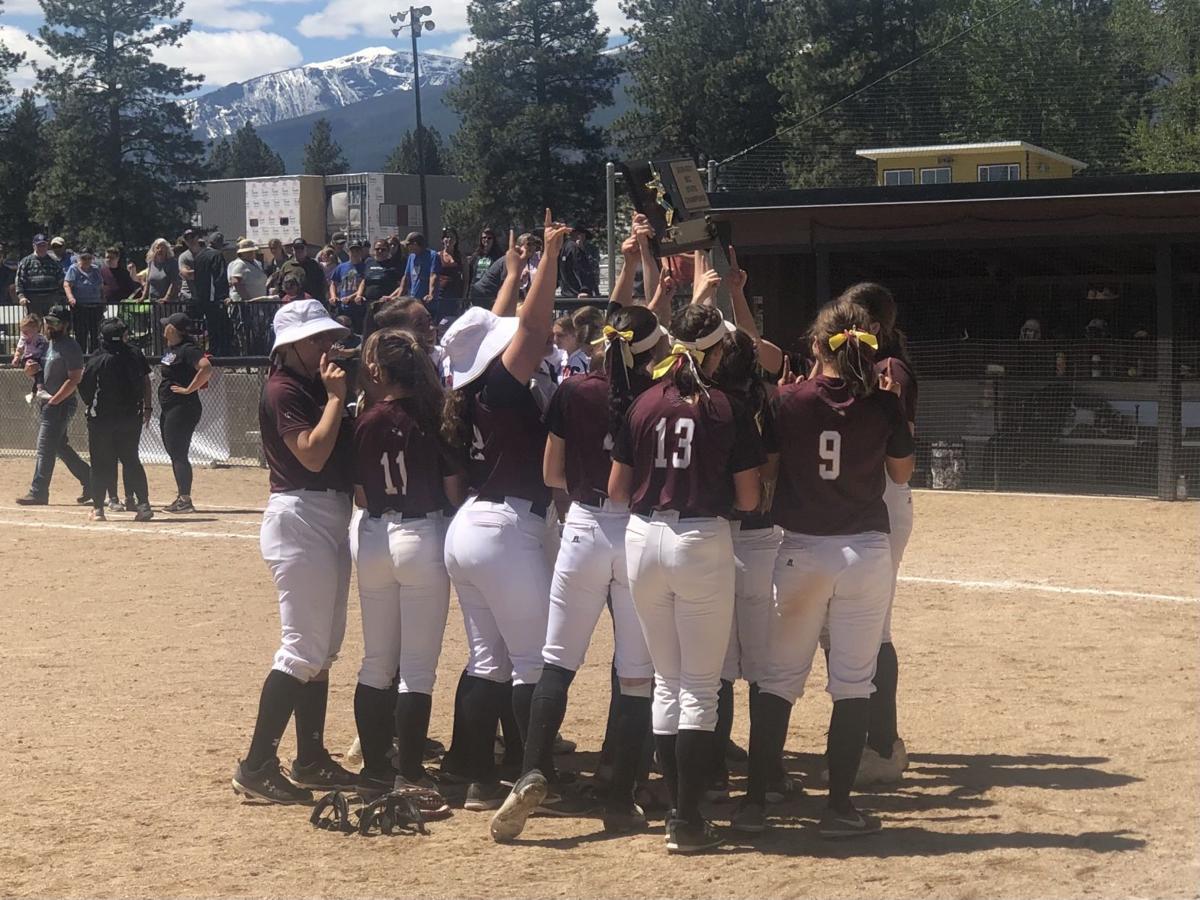 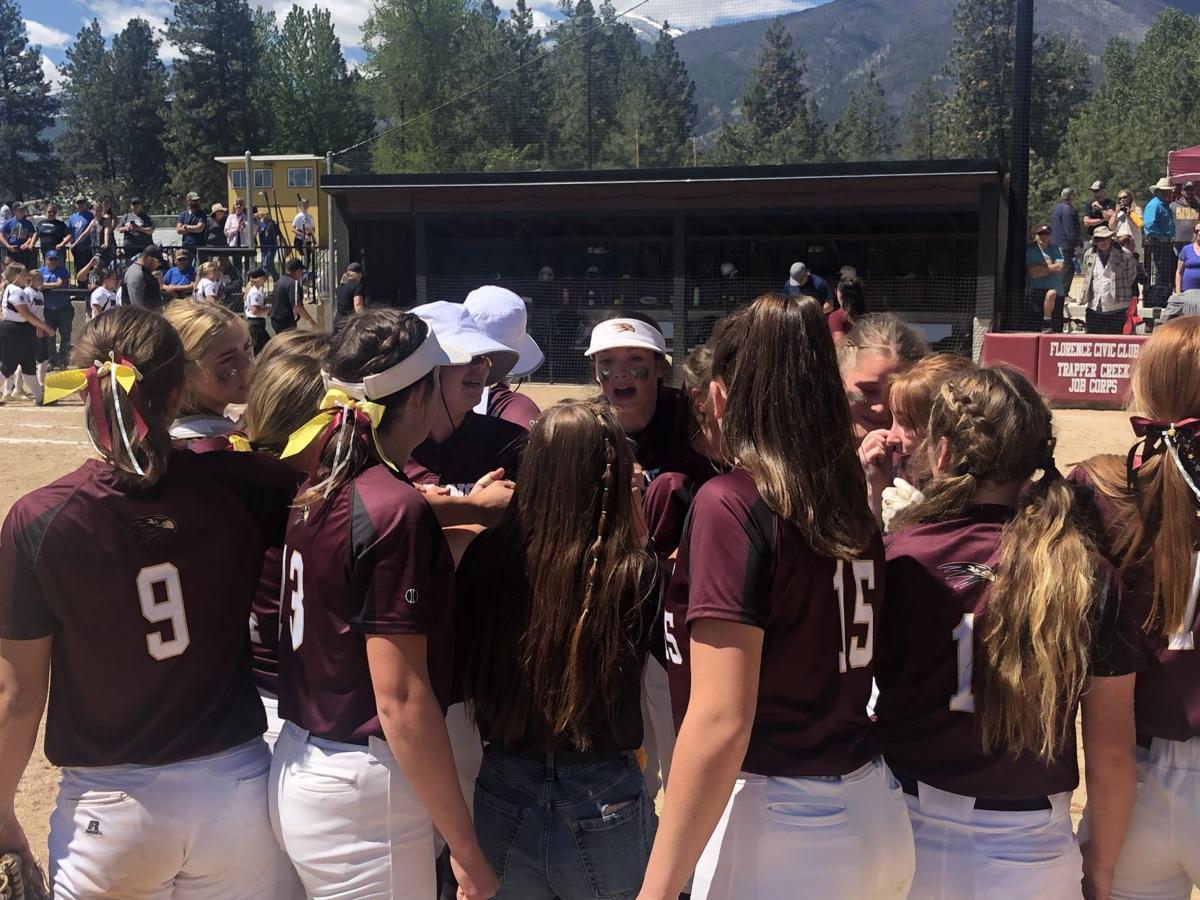 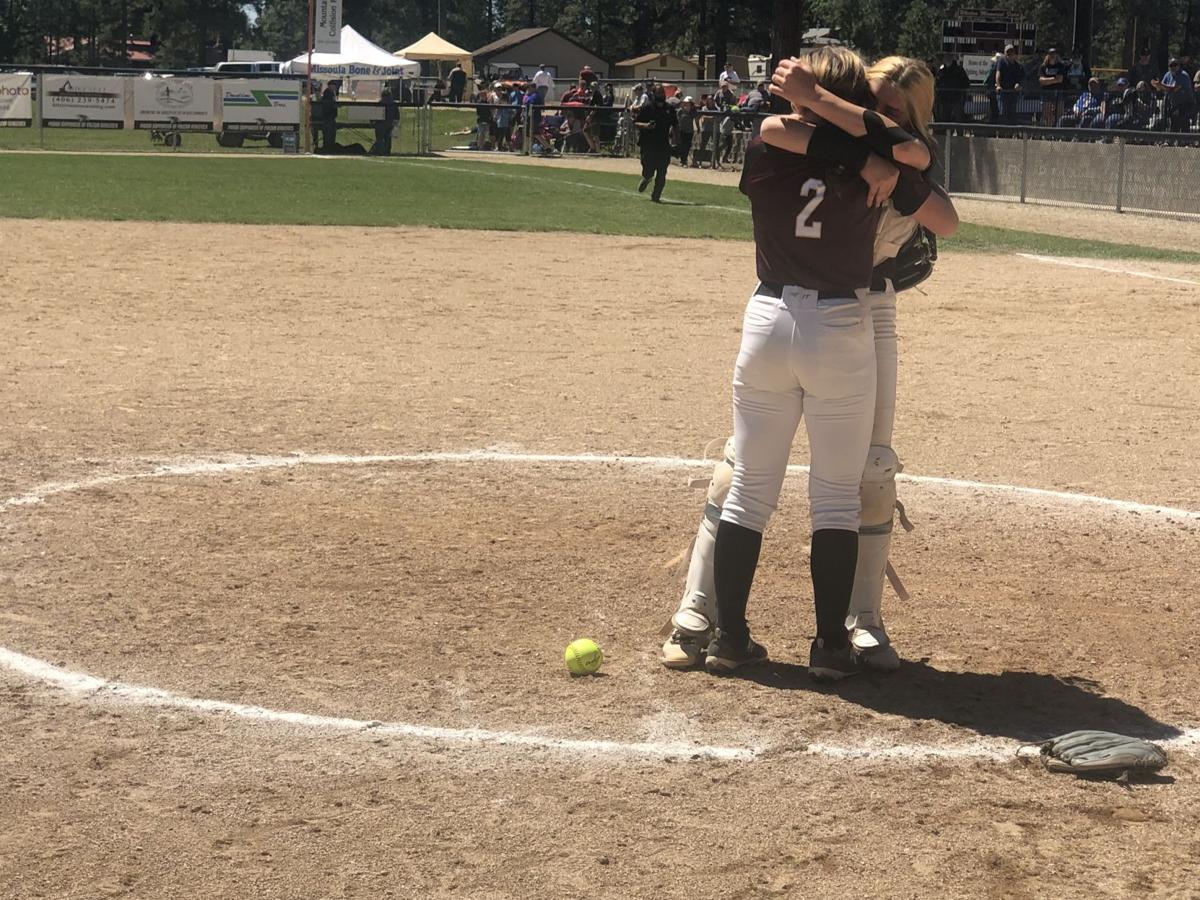 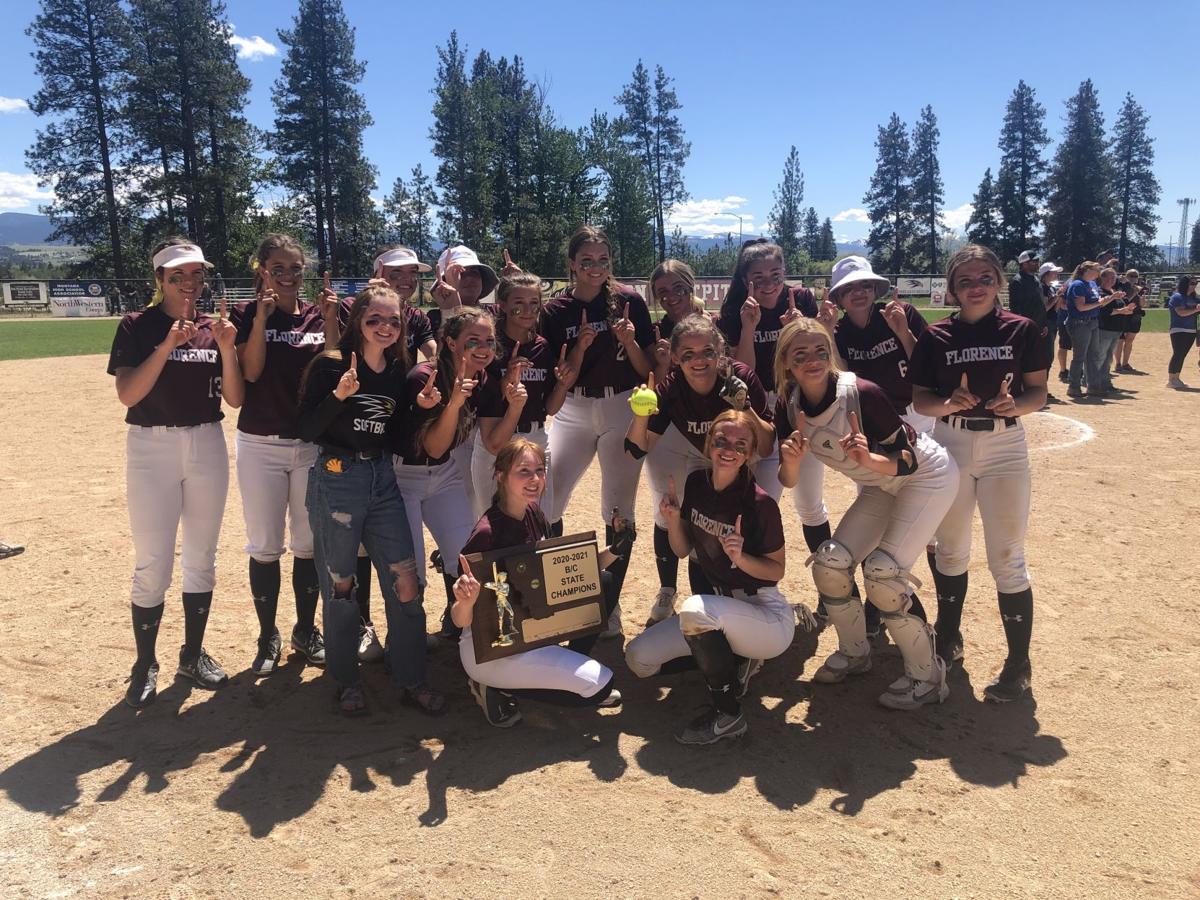 Florence poses with its State B-C softball championship trophy on Saturday at Florence High School. The Falcons beat rival Mission-Arlee-Charlo, 10-4, to win their 11th state title since 2000 and their first since 2018. 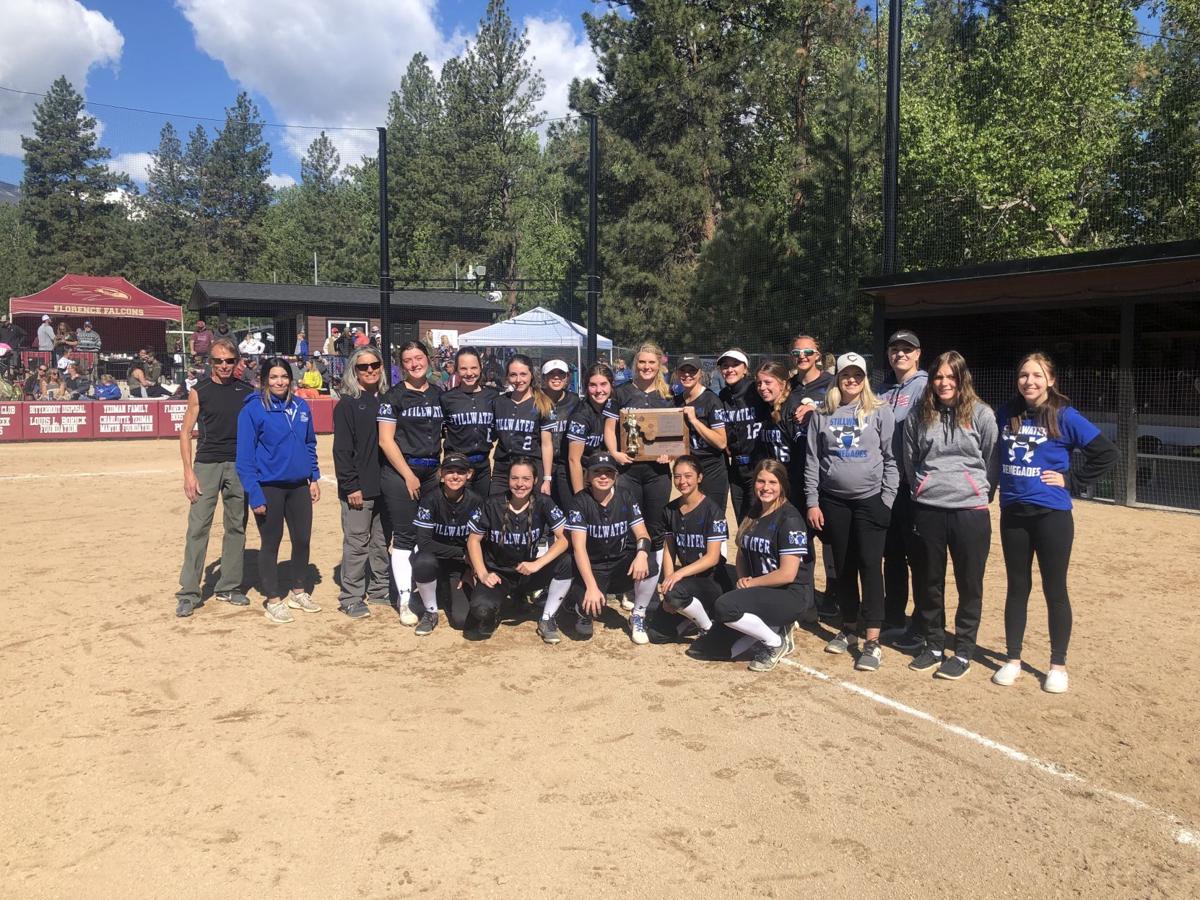 Columbus-Absarokee-Park City poses with its third-place trophy at the State B-C softball tournament Saturday in Florence. It's the Renegades' first state trophy since 2013.

Florence poses with its State B-C softball championship trophy on Saturday at Florence High School. The Falcons beat rival Mission-Arlee-Charlo, 10-4, to win their 11th state title since 2000 and their first since 2018.

Columbus-Absarokee-Park City poses with its third-place trophy at the State B-C softball tournament Saturday in Florence. It's the Renegades' first state trophy since 2013.

FLORENCE — Before Florence pitcher Kylie Kovatch threw her glove to the ground and her mask up in the air to start the celebration, second baseman Rylee Yeoman had to make an acrobatic play under the sweltering sun Saturday afternoon.

Yeoman ranged far to her left to chase down a ball and made a diving stop on her stomach near the outfield grass at Florence High School. She rolled over onto her back and lobbed the ball to first baseman Jayden Hendricksen for the final out of the game.

The collective breath that was held throughout the stadium was turned into mostly loud cheers. The Falcons had just won their record-extending 11th state title with a 10-4 victory over their rival from the north, Mission-Arlee-Charlo, as they appear poised to enter the next phase of winning in the program's dynasty.

“That play defines the kind of effort we got from our team this whole season,” Florence coach Maurice Craun said. “These girls have put in a lot of time and effort to make sure they were ready for this, and actually coming through and winning is extremely exciting.”

Kovatch and junior catcher Kasidy Yeoman started the celebration with an embrace between the dynamic duo serving as the team’s pitching battery. They were among the plethora of primariyl underclassmen players who stepped up to reel off four straight wins at state.

Junior Kolbi Wood tallied the go-ahead RBI in the final inning of the second game to keep Florence out of the loser-out bracket. Freshman Autumn Sutton collected a key two-out hit to drive in the first of six runs while facing a deficit in the fourth inning of the title game.

Kasidy Yeoman and Kovatch put so much fear into opposing teams that they combined to draw four intentional walks in the tournament. Kovatch threw four complete games as she was fueled by the memory of being the pitcher on the losing end of the state title game in 2019 when she was a freshman.

“I just thought, ‘Wow, we did it,’ and I just bawled my eyes out,” she said. “All the pressure came off my shoulders, and I knew all this work paid off. I’m beyond words proud of these girls.”

Junior Jaidyn Larson, who clubbed four doubles in the title game, envisioned getting to hold the state trophy as she ran in from center field to join the celebration. She soon after got her hands on the sweet prize she had been seeking after finishing as the runner-up in volleyball, basketball and softball as a freshman.

The next time Larson takes center field in a game, the fence behind her will have an 11th state title banner hanging up. It’ll be the first new banner at the ballpark since parents and volunteers rebuilt the field ahead of the 2019 season. This one is their first title won on their home turf as they got to host state for the first time.

“This feels awesome,” she said. “It’s nice to know there’s a banner up there with our names on it next year. I think our team has a lot of confidence and desire to carry on that history for the Florence program.”

Things didn’t always come easy for the Falcons this season. They had to knock off some rust after not playing high school softball since 2019 before the pandemic canceled the 2020 season. They also had to learn how to form a cohesive unit with this particular group of players.

An early loss to Frenchtown taught the Falcons that their best is needed every game. An extra innings loss to MAC reinforced the desire to not lose again. They went undefeated from that point on and finished the season 5-1 against MAC.

“It made us have a stronger mindset,” Kovatch said.

Florence also had a new coach in Craun, who took over last year before the season was canceled. As he and the players got on the same page, they set a preseason goal of winning a state title, and the team turned that into a reality.

As the celebration started to wind down, the players snuck up on Craun and dosed him with cold water. It elicited another round of smiles from the players after the jubilation of victory.

“To see these smiles on their faces is tremendous,” he said. “It’s probably the most gratifying thing you could have as a coach.”

The title was Craun’s first as a head coach after he was an assistant at Florence during previous championship runs. The Falcons’ 11 titles have all come since they won their first in 2000, are the most in the combined history of Class B and Class B-C, and have come in back-to-back seasons twice and three-peat fashion twice.

Florence hopes it’ll be back at state next year competing for another title. The team loses only three seniors, two who were starters, and should have a continued rivalry with MAC, which graduates only one senior.

“It’s going to be a fun battle for the next couple of years,” MAC coach Shane Reum said.

Reum is hoping that its his pitcher tossing their glove and facemask in celebration next year. That's the next step after MAC posted its best finish in program history by taking second place. The Bulldogs got to the title game after beating Columbus-Absarokee-Park City, which placed third to earn its first state trophy since 2013.

Florence blew open the title tilt with a six-run fourth inning, scoring all six runs on five consecutive hits with two outs to turn a 3-2 deficit into an 8-3 lead.

Sutton came up clutch as the only freshman in the starting lineup. She started the scoring in the fourth with an RBI single to keep alive the inning for the top of the order to come up. Leadoff hitter Kasidy Yeoman followed with a two-run triple, Larson collected an RBI double, Wood added another RBI double and Kylie tacked on an RBI single.

That flurry led to MAC replacing starting pitcher Liev Smith with Kooper Page, who has been the team's ace all season but was dealing with a shoulder strain this week, per Reum. Page pitched one relief outing Friday and started the loser-takes-third game Saturday to help MAC make it to the title game.

Florence pushed its lead to 10-3 in the sixth when Larson and Wood scored on an error. That made it 10 straight runs for the Falcons after they fell into a 3-0 hole when MAC freshman Izzy Evans collected an RBI double in the first inning and an error in the third led to Jerny Crawford and Hayleigh Smith scoring. Kovatch didn't allow a run after that until a sacrifice fly in the seventh inning.

MAC’s second-place finish was the best in school history. It was the Bulldogs’ first-ever trip to the championship game, and it came in Reum’s first full year coaching the team after the 2020 season was canceled.

“We’re excited about bringing home second,” he said. “First would’ve been nice, but super proud of these girls because they never quit, had a lot of heart, kept fighting.”

The expectations are already there for the Bulldogs to be back at state competing for a title next year. They lose only one player to graduation, shortstop and pitcher Liev Smith, who took on a huge pitching load at state with Page limited in the circle.

Mission-Arlee-Charlo exploded for eight runs in the third inning on its way to a 13-2 win in five innings against Columbus-Absarokee-Park City in the loser-takes-third game.

Freshman Izzy Evans clubbed a two-run shot in the first inning as the Bulldogs took a 2-0 lead they never relinquished. She added an RBI sacrifice fly in the fifth, scored on a throw trying to catch another runner off base and Bennan Anderson tacked on an RBI single as MAC put up three runs to end the game by the 10-run rule.

Page made her starting debut in the circle at the state tournament. The ace pitcher made only other previous appearance at state, a relief outing Friday, because of a shoulder strain. She allowed five hits, two runs and struck out three in five innings.

Mikayla Harper and Rhanda Vindiola had RBI singles for Columbus-Absarokee-Park City, which earned its first state trophy since 2013, when it also finished third. The Renegades had to win two loser-out games Friday to make the final day after they lost to MAC, 6-5, in an undefeated semifinal.

“That’s a hard battle to overcome, so to even get to the last day of the tournament, that’s something to be really proud about,” Renegades coach Justine Pearsall said. “I know the girls are especially happy to have their names on a trophy. They haven’t had that in a really long time, so it’s good to have that kind of recognition that’ll be a lasting recognition for years to come.”

The Renegades will lose five seniors to graduation but hope this is the start of more state trophies to come.

“I think it’s huge to get our young players some good quality innings on varsity,” Pearsall said. “That’s going to help prepare us for the future. I feel like we built a strong foundation for the program with our success this year.”

Florence comes up clutch in the final inning to beat Cut Bank and advance to the undefeated final at the State B-C softball tournament.