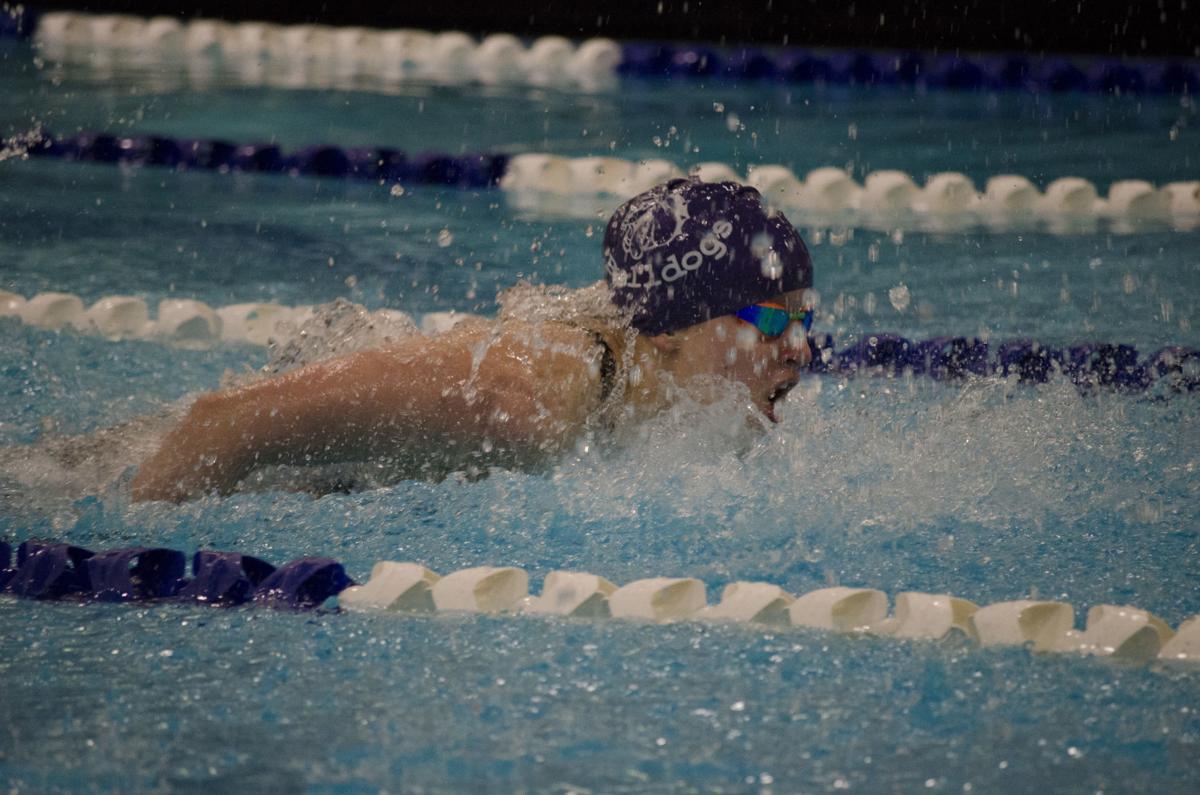 Butte's Catherine Russo swam the top qualifying time in the 100 butterfly in 55.47 seconds at the State Swim Meet in Great Falls. She went on to win both the 100 fly and 50 free. 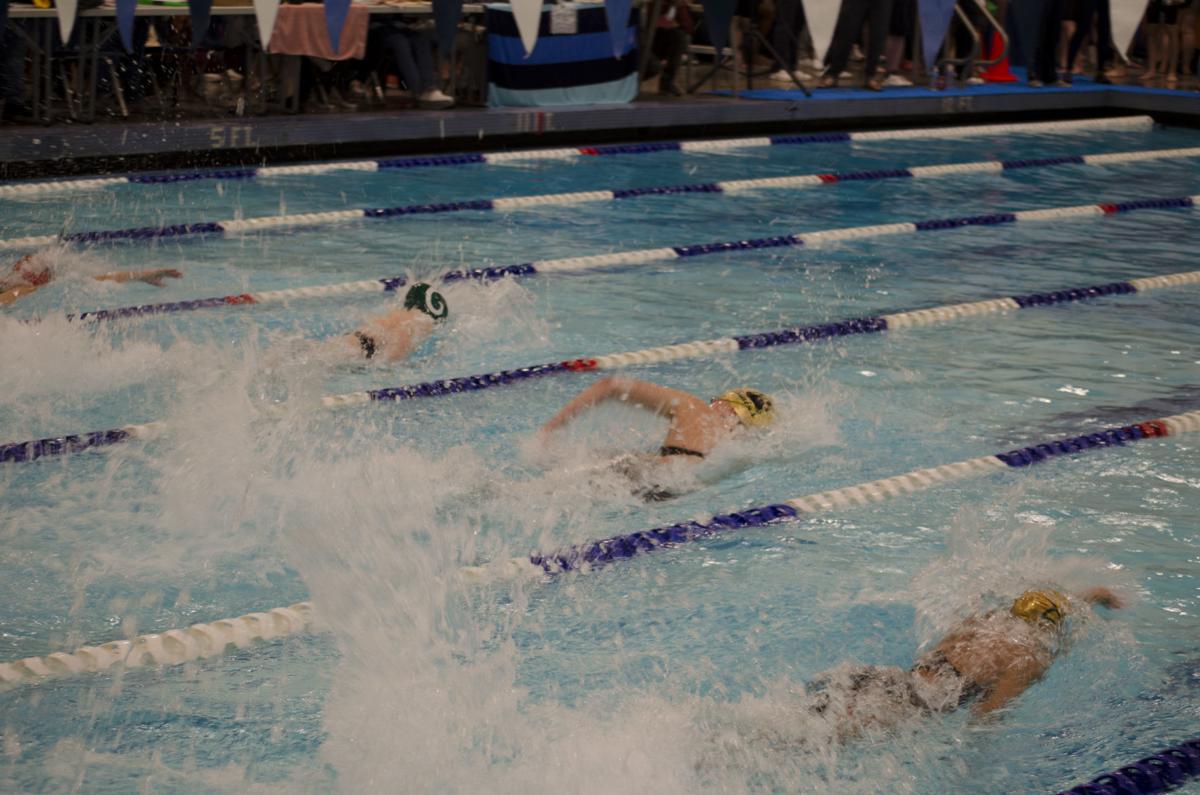 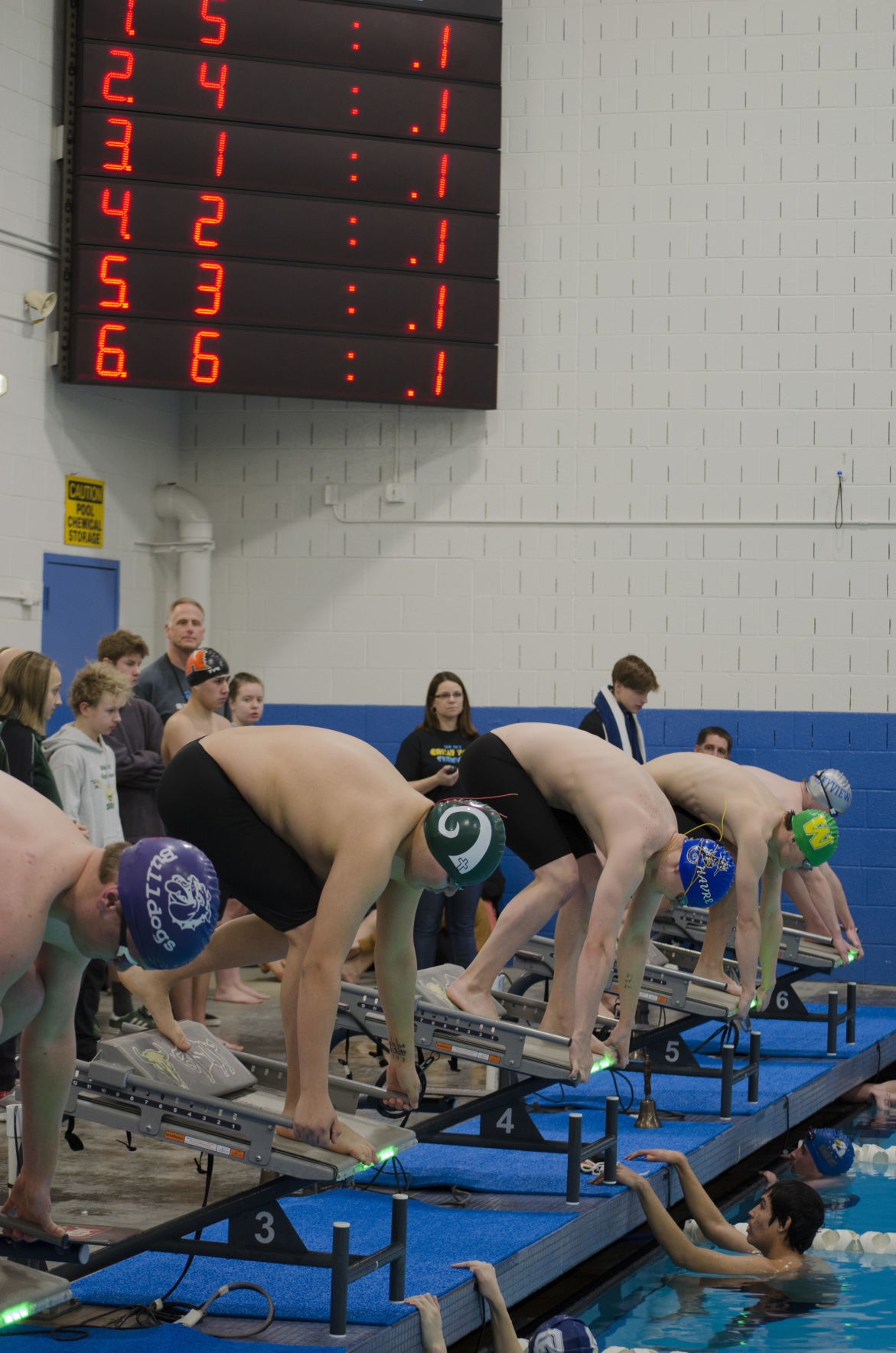 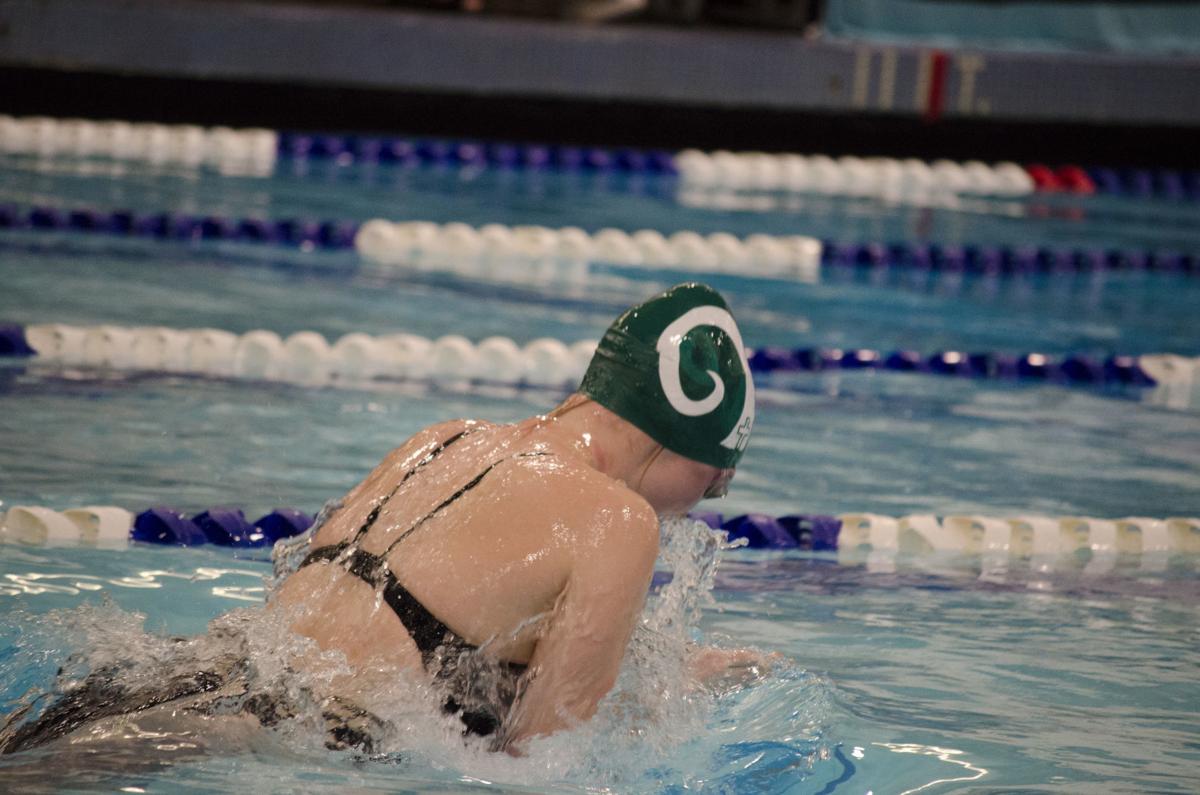 Billings Central's Julia Peterson was the top qualifier in the AB division in the 100 breaststroke after swimming 1:11.21 at the State Swim Meet in Great Falls. 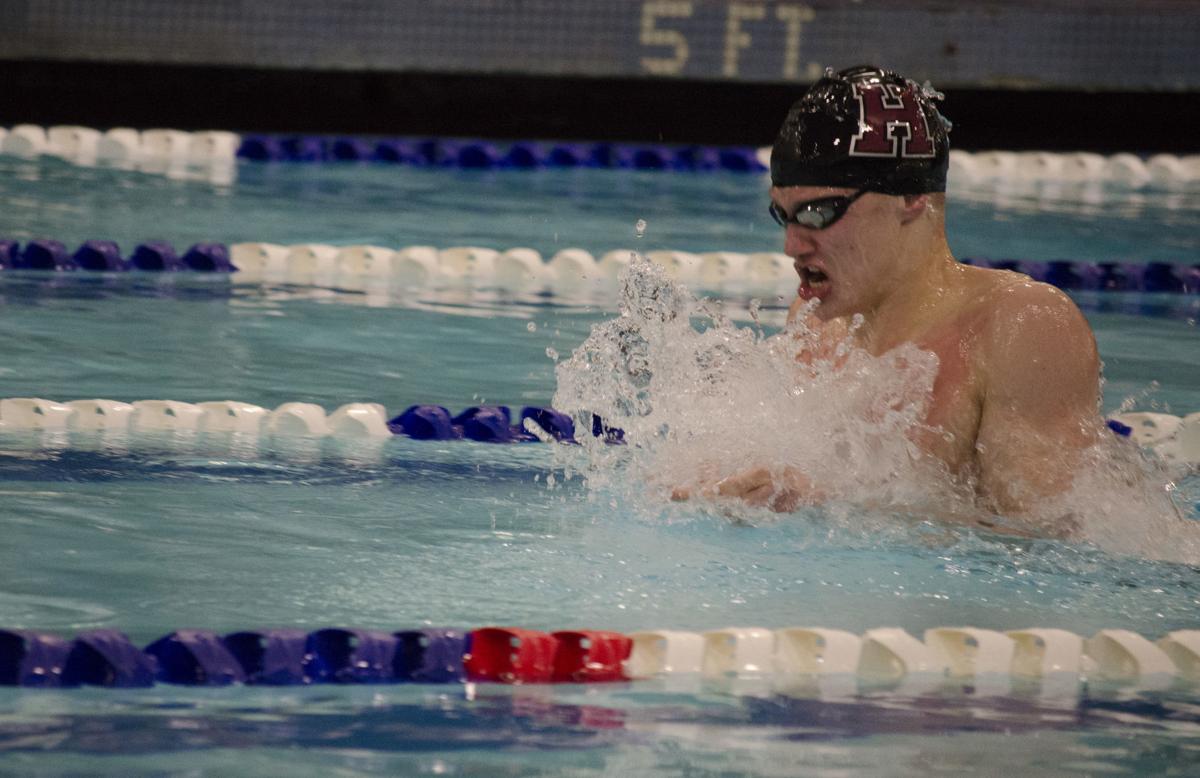 Helena High's Parker Keller completes the 100 breaststroke duringh the preliminary round of the state swim meet Feb. 14 in Great Falls.

Butte's Catherine Russo swam the top qualifying time in the 100 butterfly in 55.47 seconds at the State Swim Meet in Great Falls. She went on to win both the 100 fly and 50 free.

Billings Central's Julia Peterson was the top qualifier in the AB division in the 100 breaststroke after swimming 1:11.21 at the State Swim Meet in Great Falls.

Helena High's Parker Keller completes the 100 breaststroke duringh the preliminary round of the state swim meet Feb. 14 in Great Falls.

GREAT FALLS – For eight hours Friday, the Great Falls High pool was filled with a cacophony of sights and sounds as swimmers raced for places in Saturday’s finals.

20 teams took part with a new addition to this year’s field – East Helena’s five swimmers became the first in school history to make the meet.

The Hellgate Knights came in riding a six-year win streak atop the podium, but after graduating many state contributors from last year's squad other teams would like to catch up, including their crosstown counterparts from Missoula Sentinel. The Knights qualified six swimmers into Saturday’s A individual finals and will need strong performances if they are to continue the streak. They were led by junior Bella Seagrave (200 free, 100 breaststroke), sophomores Anya Craig (50 free, 100 free) and Avery Maxwell (100 butterfly, 100 backstroke).

Consistent challenger Bozeman stepped up their performances with their eye on the state titles and some extra motivation. The Hawks are competing in their final year as a single high school before Gallatin High opens next year. Siobhan Gilmartin will coach both teams next season even after moving over to teach at the new high school, but admitted there was some additional emotion knowing that this was the final year under one banner.

“I’m very much proud to be a Hawk right now and I just want to live that out while I can,” Gilmartin said.

Their strong performances resulted in four school-record breaking swims for the girls and boys who continued to drop time.

“Some of those are decades old and now those girls that broke our 400 relay have their sights set on the state record so we’ll see,” Gilmartin said.

No state records fell Friday, but a duo of swimmers who swum 2020 Olympic Trials qualifying times already have their eye on the state records as they prepare to swim in their final Montana high school races Saturday.

Helena’s Parker Keller led with top times in the qualifying heats in both the 200 IM (1:57.54) and 100 breast (57.32). He’s the defending champion in the 100 breaststroke, but wants to add to that legacy before he finishes his high school career.

“Tomorrow I’m going to come back and I’m really going for that state record in the 100 breast and I’d really like to go a little bit faster in the 200 IM as well,” Keller said.

“Going in as a top seed in both of my individual events is nice, but in swimming there’s no guarantees ever.”

Catherine Russo knows that as well. As a freshman, the Butte Bulldog won both the 50 free and 100 butterfly at the state meet in Great Falls. Then as a sophomore, she defended them and broke the records for both in the same pool. Now, as a three-time defending champion in both, she wants to go out on top along with making her mark.

“My biggest thing is I want to get it pretty low so that nobody touches it for awhile,” Russo said Friday. “I want them to stand for awhile so that people in like 30 years are like, ‘That record is still standing from like 2020.’”

But Friday afternoon, she was most excited for the team performance in the 200 free relay which included her sister, Isabel Russo.

“I wanted to make top 6 so she and I can make an A final before I graduate,” Russo said.

The Bulldogs qualified fifth so they will race Saturday together in the finals.

Russo said, “I think our 200 free relay is going to be one to watch”

The relays provided drama from start to finish Friday. There were disqualifications, record-breaking performances and it all concluded with the Great Falls and CMR boys going stroke-for-stroke through most of the 400 free relay in the final event of the day.

“We preach and we work on that brothers can compete. That you can pull for each other, but you can also go out there and compete hard and try to beat each other and that’s what they do every day,” Great Falls coach Ed McNamee.

“It’s going to be a unique situation tomorrow having two teams right there.”

The Helena boys trophy hopes took a hit when they were disqualified in the 200 free relay for a false start, but Keller said it was something they intended to bounce back from.

The AB classification didn’t race any relays at all in the preliminary rounds in a new format.

“When they passed the new rule so that we could have our own relays, they put in that we would only have final relays because we didn’t have enough teams at the time,” Billings Central coach explained Robyn O’Nan.

“It was weird sitting there watching relays and not being a part of them for the first time ever.”

The Whitefish girls came in as the defending AB champions and kept up the momentum on Friday. The boys team also joined them as they qualified seven swimmers into the finals.

Their AA counterparts from Kalispell Flathead and Glacier, although young by first-year coach Karen Bouda's description, is growing. Between the two programs, they had 75 swimmers come out for the team initially and brought 33 to the state meet in Great Falls.

Behind strong performances by Flathead's Lily Milner and Glacier's Caroline Dye, Bouda is looking for them to move up by the end of the meet.

Swimmers from Columbia Falls and Bigfork also represented the strength of swimming from the northwest corner of the state.

Photos from the first day of the 2020 State Swim Meet in Great Falls.

Butte High swimmer and Ohio State commit Catherine Russo's shot at qualifying for the Olympics will be on hold for another year.