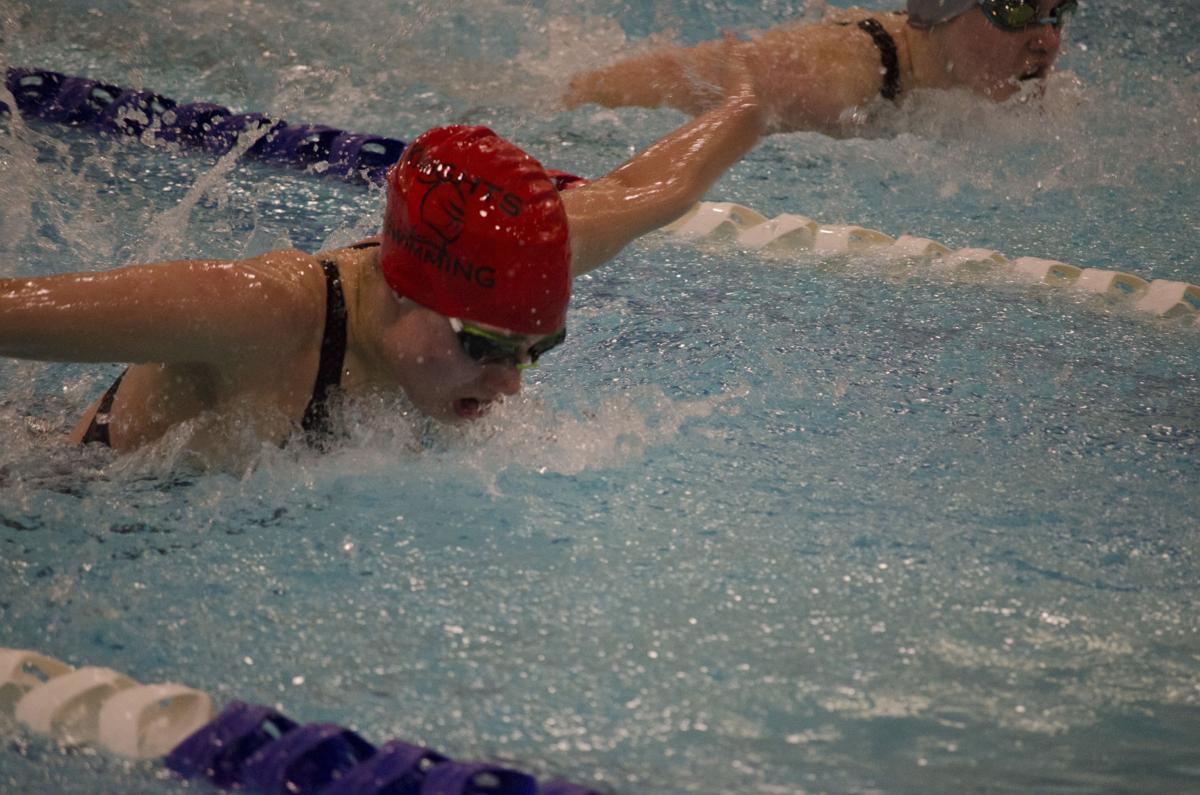 Missoula Hellgate's Avery Maxwell swims the 100 fly on Feb. 14 at the State Swim Meet in Great Falls. All three Missoula swim teams will dive into regular-season competition this weekend in a shortened season ahead of the state meet this March. 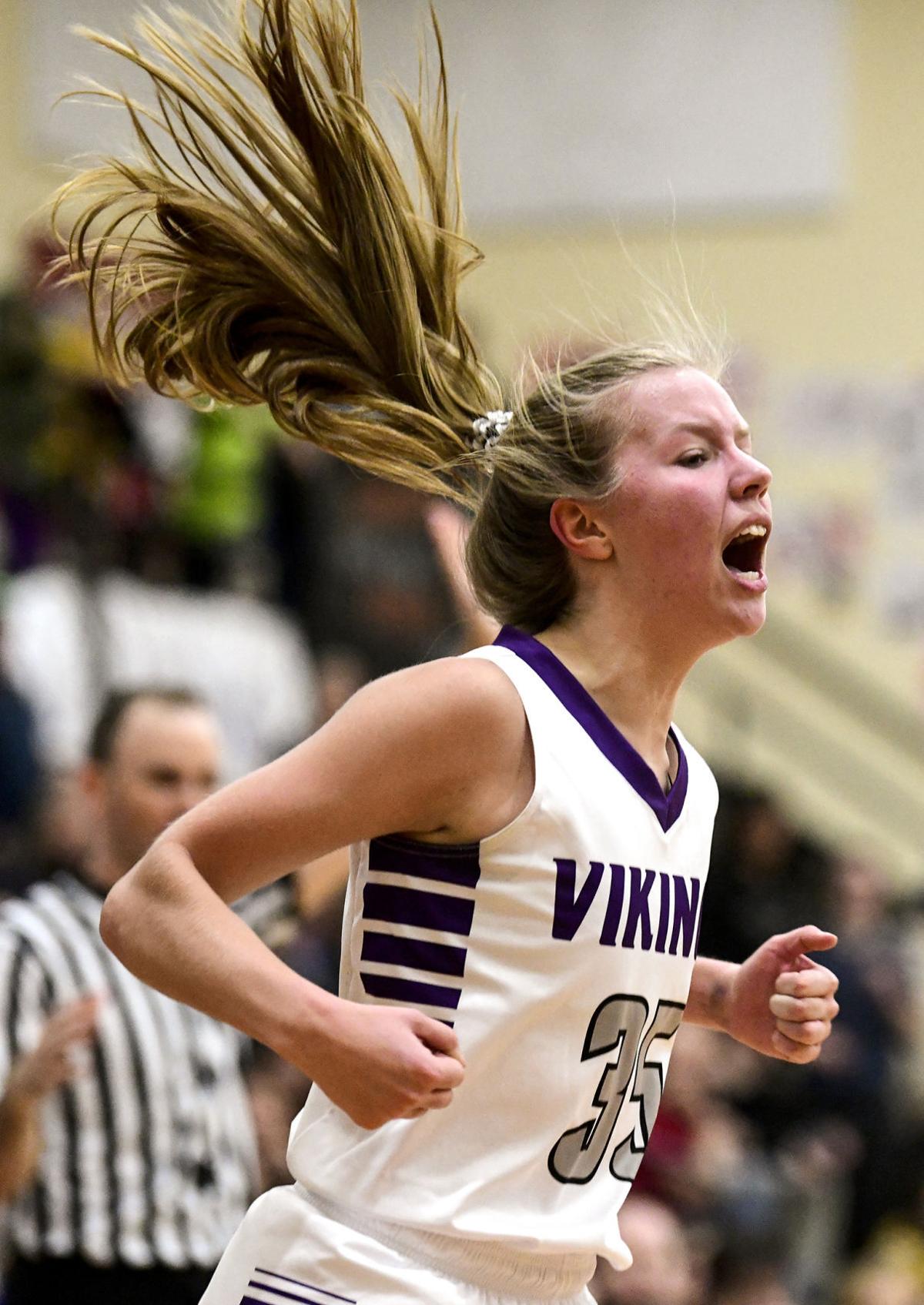 Charlo's Carlee Fryberger celebrates after her teammate makes a shot in the Western C Divisional semifinal against Seeley-Swan last season in Frenchtown. Now a senior, Fryberger and the Vikings are off to a 5-0 start this year. 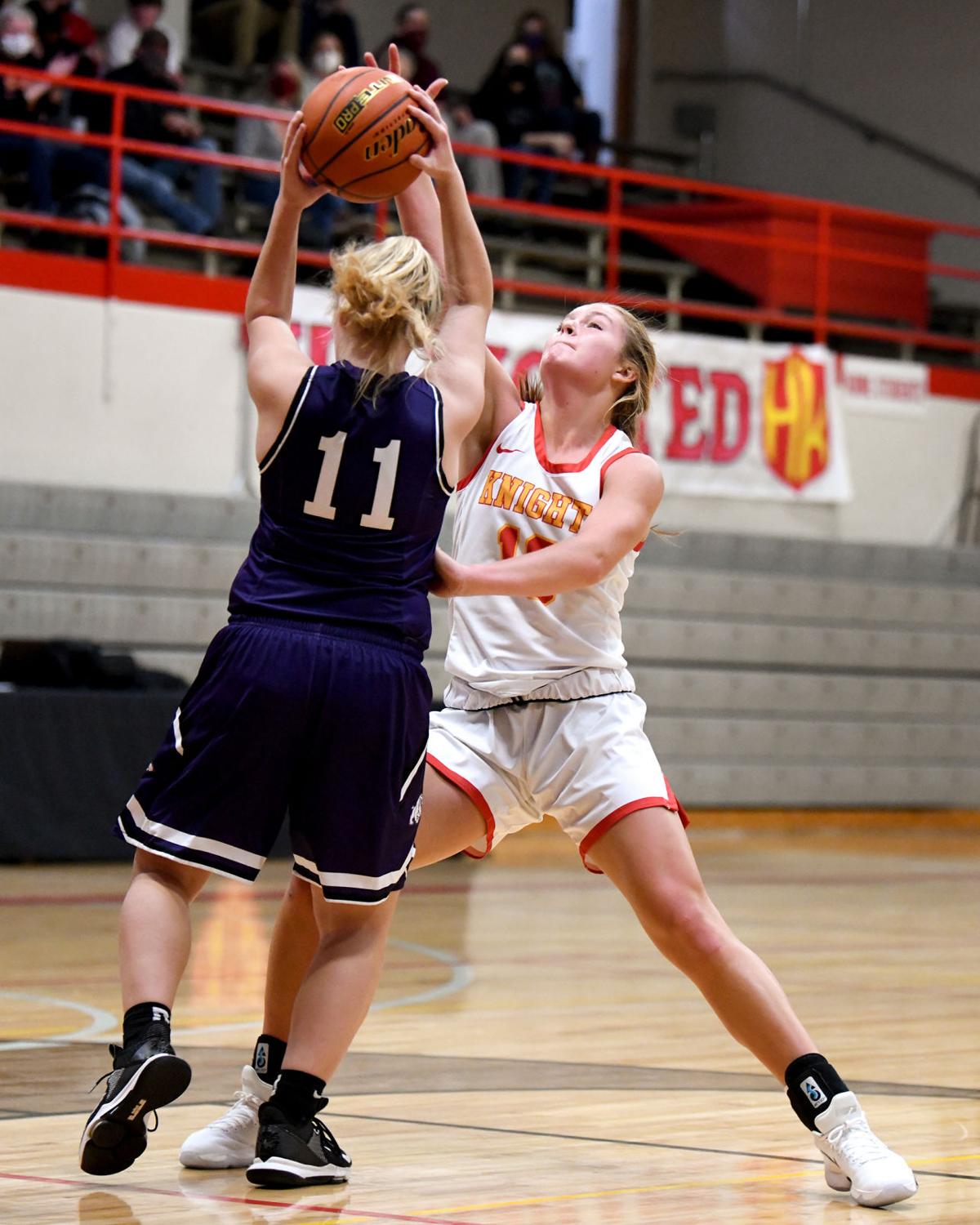 Missoula Hellgate’s Lauren Dick guards Butte’s Madalynn Rhodes during their basketball game on Friday at Hellgate. The Knights' 'U-Knighted' sign is partly visible in the background.

Missoula Hellgate's Avery Maxwell swims the 100 fly on Feb. 14 at the State Swim Meet in Great Falls. All three Missoula swim teams will dive into regular-season competition this weekend in a shortened season ahead of the state meet this March.

Charlo's Carlee Fryberger celebrates after her teammate makes a shot in the Western C Divisional semifinal against Seeley-Swan last season in Frenchtown. Now a senior, Fryberger and the Vikings are off to a 5-0 start this year.

Missoula Hellgate’s Lauren Dick guards Butte’s Madalynn Rhodes during their basketball game on Friday at Hellgate. The Knights' 'U-Knighted' sign is partly visible in the background.

Hellgate, Sentinel and Big Sky/Loyola/Frenchtown will hold their first meet of the season on Friday and Saturday against schools from Kalispell. The meet will be virtual and without fans because of restrictions on the number of people at Grizzly Pool on UM’s campus.

“It’s been a weird season so far just because we started so late, but I’m excited to be in the water,” said first-year Missoula head coach Brady Baughman, a Frenchtown native who spent the past three years as an assistant coach under Helen Houlihan and Morgan Zimmer.

“I’m really looking forward to the meet this weekend and excited to see some kids back in the pool. It’ll be interesting to see how it goes.”

Missoula will compete in three meets over the next three weekends as they prepare for the state meet which is currently slated for March 5-6. The Hellgate boys and girls won six consecutive team state titles prior to last year when Bozeman took the team titles.

In a normal year, the Missoula teams would’ve started practicing around Thanksgiving and had 10 weeks of competition before state. They didn’t start practicing until Jan. 13 because there was a lifeguard shortage, which Baughman said has been a trend at pools around the city.

Swimmers have to complete 10 practices before they’re allowed to compete in a meet, per MHSA rules. One team does an hour-long dryland practice, and the other two schools have separate one-hour swim practices. Each team is rotated in those three blocks every day.

“I think that all the kids we’ve had in the water are excited that we were able to get back in the pool,” Baughman said. “The culture for every team has been so fun to watch develop in the last two weeks. Because they’re smaller numbers with practice times split for each school, they get to meet and know their teammates rather than having 40 other kids there and there’s too many people. It’s been cool to see the kids really enjoying the sport a little bit more.”

Baughman attributed the drop partly to fewer kids joining because of the pandemic but also because of a large senior class that graduated last year. The smaller numbers are better in one aspect this year because only 25 people are allowed on the pool deck at one time. That number has to include swimmers, coaches, lifeguards and officials.

“The last three years, the kids have had fun, but early in the season, they were shy and timid, but off the bat this year, they were laughing and having a good time,” Baughman said. “I think they’re excited to be back in the water. Even though we don’t get to go to full meets, they still get to compete. A lot of the goals they wrote are get better at this event or try to swim this stroke this year. I think it’s also one of those places they get to be social.”

Baughman said MHSA guidelines encourage virtual meets but allow dual meets. He noted that Missoula won’t compete in a dual because each of the three Missoula teams counts as one team and it wouldn’t be fair to pick just one to go to a dual meet.

This weekend, one Missoula team will swim at 7 p.m. Friday, one at noon Saturday and one at 2 p.m. Saturday. Times will be submitted to be compared with other teams, and results will be released within a day or two.

“We’ve talked about having to change your expectations and your view and reality about how meets are going to go because they’re not going to be the same, especially when you’re racing only one or two other people in that event and they’re not in the same speed group,” Baughman said.

Charlo couldn’t buy a basket at the Western C Divisional last year, and the young team was frustrated.

The Vikings are now a year older and a year wiser after getting bounced out of the divisional tournament and missing state despite starting that season 21-0. This year’s group is off to another undefeated start at 5-0 and is beginning to find the missing ingredient.

“Scoring has definitely been better than in the past. We’re getting it from lots of girls,” said Charlo coach Bret Thompson, whose fifth-ranked Class C team played Noxon on Tuesday as it wrapped up its first cycle through conference play in the Western 14-C.

“Most of our scoring is being set up with good defense and doing a better job on the other end finishing. Last year, we struggled and got into a couple games where we needed those baskets and didn’t get them. I’m hoping we’ll keep moving forward and see an improvement.”

Thompson didn’t feel the need to overhaul his offense after the Vikings had their first loss of the year in the divisional semifinals and were eliminated in a challenge game with a state berth on the line. The players hit the court and the weight room over the summer, Thompson noted.

“We’re running the same offense; they’re just doing a better job running it, a better job than their coach does coaching it,” the 35th-year head coach deadpanned. He eclipsed 600 career wins last season and led Charlo to its lone state title, in 2003.

The Vikings’ continuity has been key in their growth as they return four starters and graduated just one senior. They have six players averaging at least 7.2 points, highlighted by seniors Connor Fryberger and Carlee Fryberger, who are averaging 11.6 and 10.2 points, respectively.

Junior Kassidi Cox and senior Liev Smith are also returning starters, although the latter has been dealing with a sprained ankle, Thompson said. Sophomores Mila Hawk and Hayleigh Smith are both bringing abilities as scorers and defenders to the guard spots for a team that doesn’t have a player taller than 5-foot-10.

“We’ve had a variety of girls score in the past, but it seems we’re a little more consistent with our scoring” Thompson said. “The one thing we don’t have that all those other teams we were playing against is size. We’re a small team, so we’ve got to make it up in other ways. When the ball goes in the basket, the game is easier. So, we’re still working on that and need to be more consistent with our perimeter shooting.”

Missoula Hellgate is working to be “U-Knighted” this season as it chases its first State AA championship game appearance since the spring of 2003 and its first title since the fall of 1994. The top-ranked Knights had warmup shirts and a sign taped up in the gym sporting “U-Knighted” during their most recent home game against Butte on Friday.

“That’s our slogan this year,” Hellgate coach Rob Henthorn said. “We’re trying to use that on the floor as well as outside of school and be together and enjoy each other because you don’t know what’s going to happen this year. When we break the huddle at the end of the day, it’s all about family.”

Henthorn credited the Hellgate community with coming up with the slogan and noted his wife was the driving force behind it. Henthorn’s son Brady and daughter Darby are assistant coaches.

Recap all our high school sports coverage from the fourth week of the winter sports seasons.

The MHSA decided to maintain its guidelines in large part because of Montana's relatively low COVID-19 numbers.