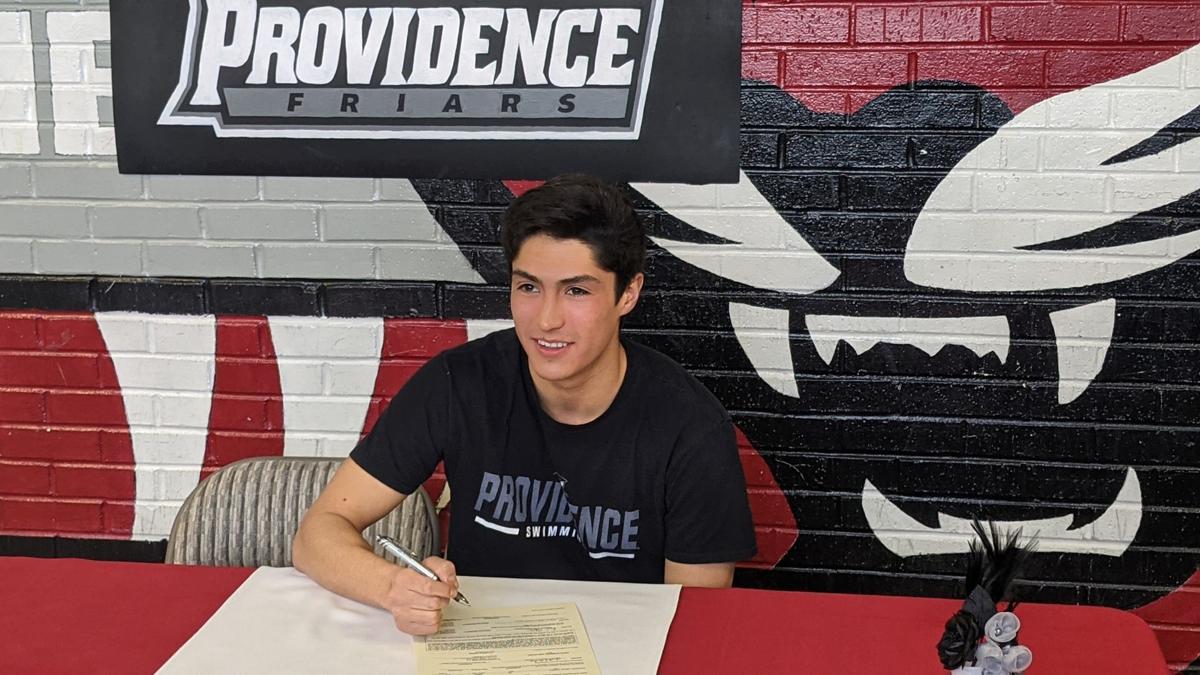 HELENA — Helena High isn't exactly the school you would think of as a swimming factory. But after the Bengals had a third swimmer sign to be a Division-I athlete in the last year, it's hard to argue otherwise.

Quade Oser became the latest Bengal to become a D-I swimmer as he signed with the Providence College in Rhode Island on Tuesday and actually, he's the second Helena High swimmer to join the Friars as Parker Keller, the 2020 IR All-Area Swimmer is a freshman swimmer at the school currently.

"It feels good," Oser said. "It's exciting. When I was little, I thought about being a D-I athlete a lot and it's pretty exciting to be one now."

Picking up the sport in the fifth grade, it was a natural fit for Oser, who as a junior in 2019-20, finished second at the Class AA state meet in the 100-meter breaststroke thanks to a time of 1:01.56. He was also part of a team that took third-place in the 200 medley relay.

That led to multiple schools expressing interest in him, but he said Providence was the right fit and having Keller there already certainly didn't hurt the Friars chances.

"I was talking to a couple other schools," Oser said. "But Providence offered me a spot and D-I sounded pretty good. Parker is also one of my best friends and he introduced me to the coaches and stuff like that. It also makes the idea of moving across country a lot easier."

In a normal year, the state swim meet wouldn't be far off for Oser and his teammates. However, due to the COVID-19 pandemic, winter sports were delayed, at least in terms of competitions, until last week.

This week, the Bengals and crosstown counterpart Helena Capital will be in Butte and come March 5-6, Oser will be looking to cap his high school career with a state championship, which was just out his reach a year ago when he finished top three in two events.

"I am definitely going to try and win the 100 breast and hopefully the 200 IM," he said. "And hopefully, our team can have a shot at the team title. We have been close the past three years so hopefully, it happens."

Oser is a senior and embarking on his final season swimming in Helena for the Bengals, but he's not the only current HHS swimmer going D-I as Robert Wagner signed with St. Francis, a Division-I one program in Brooklyn, New York just last week.

Wagner's high school resume speaks for itself as he comes into his senior season with five state titles — four individual titles and one as part of a relay team.

That's why it's no surprise schools were after him, but he actually made contact with St. Francis and in the end, it all worked out.

"It's been a lot of work but it's been totally worth it," Wagner said. "For what I'm getting out of it, it was worth everything I have put into it. It's going to be a culture shock (New York) but it will be fun."

As far as the Bengals churning out three D-I athletes in the pool over the last two years, Wagner said it's been a long time in the making.

"It's crazy to think about," Wagner said. "But it's something we have been working hard for and I'm glad we achieved it."

Now, Wagner has one goal left: "Set records at state," he said, as well as hopefully helping Helena win a team championship this March.

The Bengals star will be competing in the open water 5K