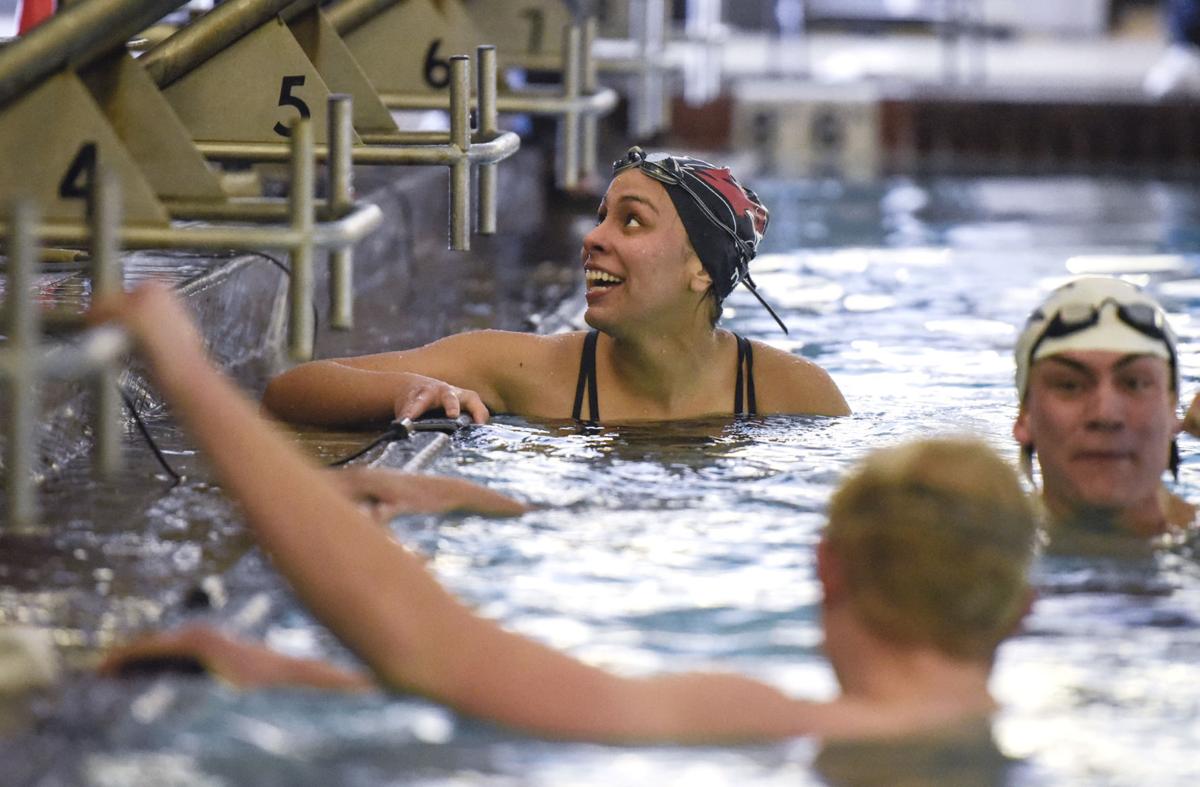 BOZEMAN — Sara Guillen had somewhere to call home. But when she walked in, without her mother, father and brother there, she knew her life would be different.

Guillen’s family had moved from Bozeman to Texas when her father took a job as a plant scientist at Texas A&M. But Guillen wanted to finish her last year of high school and last season of swimming at Bozeman High. So she moved in with Hawks head coach Siobhan Gilmartin’s family this past summer.

“It feels like a home, even if it’s not my parents,” Guillen said. “Obviously they could never replace them, but I’ve been so grateful.”

Through changes at school because of COVID-19 and with her family moving, Gilmartin said Guillen has become more mature. During the past year, Guillen has found stability in the sport she’s been drawn to since she was 4 years old.

Guillen, a team captain and senior at Bozeman, will lead the Hawks going into the Class AA meet Friday in Great Falls. The Hawks boys and girls teams are hoping to defend their state team titles they won a year ago.

But Gilmartin, who is also Gallatin’s head coach, noted Guillen has lately turned her focus from school to state records.

“This is newfound confidence she has in her abilities,” Gilmartin said. “I think she’s going to be successful beyond her wildest dreams.”

Guillen’s mom, Paola Guillen, said Sara wanted to swim since she watched her older sister at practices as a young child.

Once on a lake trip, Paola said 2-year-old Sara didn’t want to leave the water. Growing up, she hardly ever would.

Paola recalled Sara, then still younger than 5 years old, once marching up to a Bozeman Barracudas coach and asking what she needed to do to join the team. She was told she could once she swam the length of the pool facing forward and another time while doing the backstroke.

Sara did so the next day. But her parents kept her from competing until she was just a little bit older.

This fits how Paola described her daughter now. Paola called Sara organized and determined. She sets her own goals, and Paola made sure to support her, whatever her chosen endeavors were.

“From Day 1, she loved the team,” Paola said of her daughter. “She never took a season off.”

Sara never wanted to stop. She swam nearly year round, including for the club program nine months out of the year. The high school season, which is more condensed, required more weight and conditioning training.

“There’s definitely a different energy that it brings,” Sara said of swimming. “Even when it’s super hard and you feel like you can’t do it, you’re still there with your best friends and you get it done and you do your best every day, and that’s something that’s felt really rewarding.”

When Sara was a freshman, Gilmartin needed a few weeks to realize just how fast she was. She hardly ever spoke up and talked about her own performance. All she did was work to become better.

After Sara won the 500 freestyle title at state as a freshman, Gilmartin used that as proof to her that she could compete among the best swimmers in the state.

“That was a really powerful moment for her,” Gilmartin said. “That was validating and even surprising to her that she was that good.”

Halfway through Sara’s junior season, her family began to consider moving to Texas. Gilmartin said she “can’t imagine how difficult that situation must have been.”

Sara didn’t want to move somewhere unfamiliar and where she didn’t know anyone for just a year before she moved again for college. Making friends would’ve been even more difficult during the coronavirus pandemic.

She loved Bozeman, and she was hoping she could find a way to live here for one more year.

This summer, while eating breakfast together, Gilmartin told Sara — half-jokingly, she says now — that her family had an extra room for her to live in.

Sara — not wanting to take it seriously — didn’t want to burden the family of her coach, who is also married to her government teacher. But a few weeks later, Sara and Gilmartin’s families began to talk about it more.

When the Guillens moved away in June, Sara stayed with Gilmartin. As emotionally painstaking as this was, Sara’s mom maintained the same priority she had since her daughter was a toddler wanting to swim.

Supporting her in every way she knew how was of the utmost importance.

“We are happy, but we obviously miss her every single minute.”

Gilmartin said Sara fit right in at home, adding that her 4-year-old and 7-year-old children are “obsessed” with the new addition to the house. She’s not sure how they’ll handle her moving to college.

“And I love them too,” she replied.

“Sara’s been the greatest blessing,” Gilmartin said. “We’re definitely not raising her. Her parents are very involved with her life and are definitely raising her, but she’s a part of our family.”

Sara said she calls her mom about five times a day and added she can ask Gilmartin about anything. Still, Sara has had to become used to living more independently.

Sara said school is more difficult as a result of COVID-19 protocols. But Paola boasted that her daughter has mental discipline.

The Guillens emphasize education, and that didn’t change for Sara now that her parents were the length of the country away. Gilmartin proudly noted Sara scored a 34 out of 36 on her ACT.

Sara believes swimming has been one of the few things she can depend on. She still has her teammates here, and they are all still striving to achieve a common goal.

“As long as I’m being myself and giving everything I have, that’s all I can do and that’s the most I can ask for,” Sara said. “I think that’s helped me so much.”

Gilmartin noticed Sara has carried herself more like an adult than before. She knows how to better deal with challenges she faces.

“You have a different perspective. You have a bad race? That’s OK. You’ll have another race,” Gilmartin said. “I still think she has a really high expectation for her performance, and I think she has nerves, but I think she’s able to blend that well with what really matters.

And since Sara’s freshman year, Gilmartin said she also has displayed more confidence.

“She just seems so much more calm and self-assured, and I could not be more proud of that,” Gilmartin said. “That’s more important than swimming. That’s how you’re going to be for the rest of your life is having that self-confidence.”

Sara plans to swim for Division III Puget Sound, though she isn’t sure what her academic path will be yet.

Until then, Sara is focusing on the last state meet of her career. She admitted she’s still nervous and doesn’t know what the final result will be for her individual performances.

But she’s not focused on herself that much anyway. When asked about state, she talked more about how well her teammates could perform. She expressed confidence in her peers, including the freshmen.

Because of that, Gilmartin and Paola believe Sara will thrive with whatever path she decides to take. They’re eager to see what can happen for her at Puget Sound, located in Tacoma, Washington.

“That’s even farther away,” Paola said with a laugh. “But you know, we’re just supporting her with whatever she wants to do.”

Guide to the 2021 state swimming meets

Rather than a single meet, there are separate meets for Class AA and A-B in 2021 to be held in Great Falls and Polson.