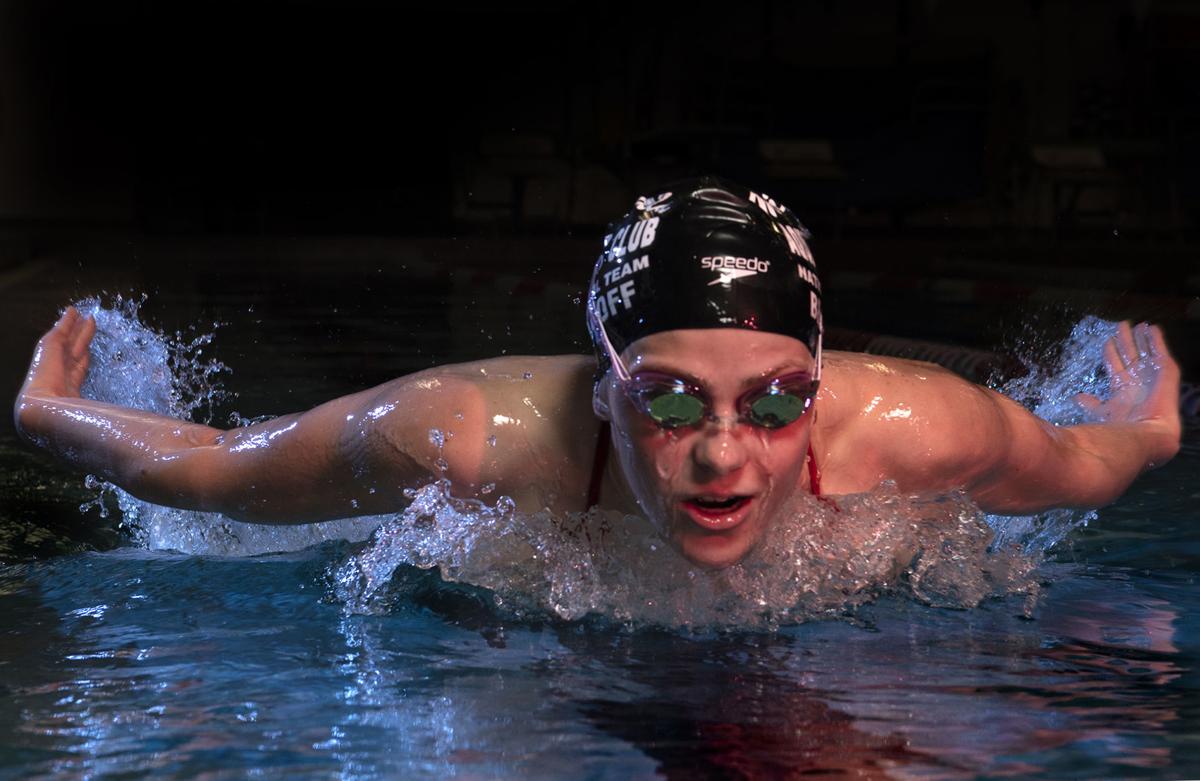 Missoula Hellgate's Katharine Berkoff swims in the Grizzly Pool on the University of Montana Campus Wednesday. Berkoff just completed her final season of high school swimming where she capped a career with 16 individual state titles and helped extend the Knights' team title streak to six. 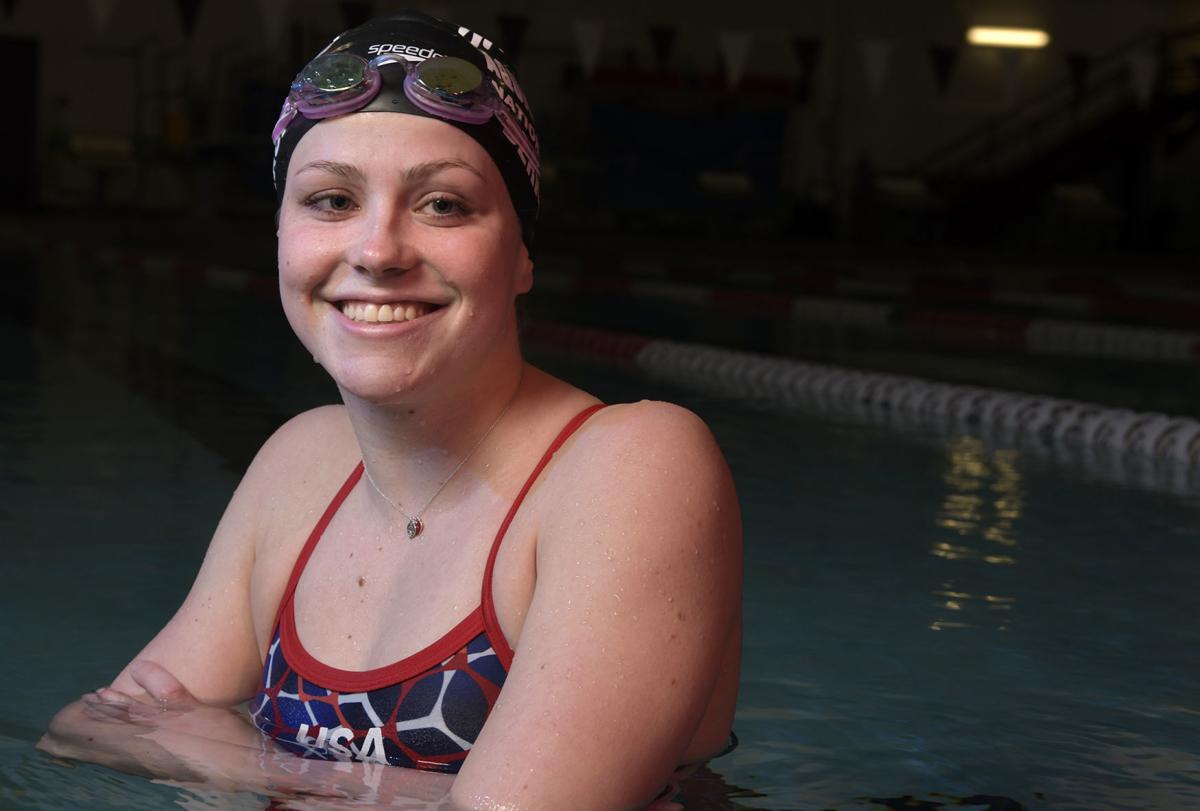 Katharine Berkoff's dream and goal is to make it to the 2020 Summer Olympics in Tokyo. “It’s coming closer to the time when it’s going to happen so it’s a little freaky I guess but it’s becoming more serious and definitely it’s always on my mind. It’s always been a dream for me but I’ve been taking it very seriously especially the past four years.” 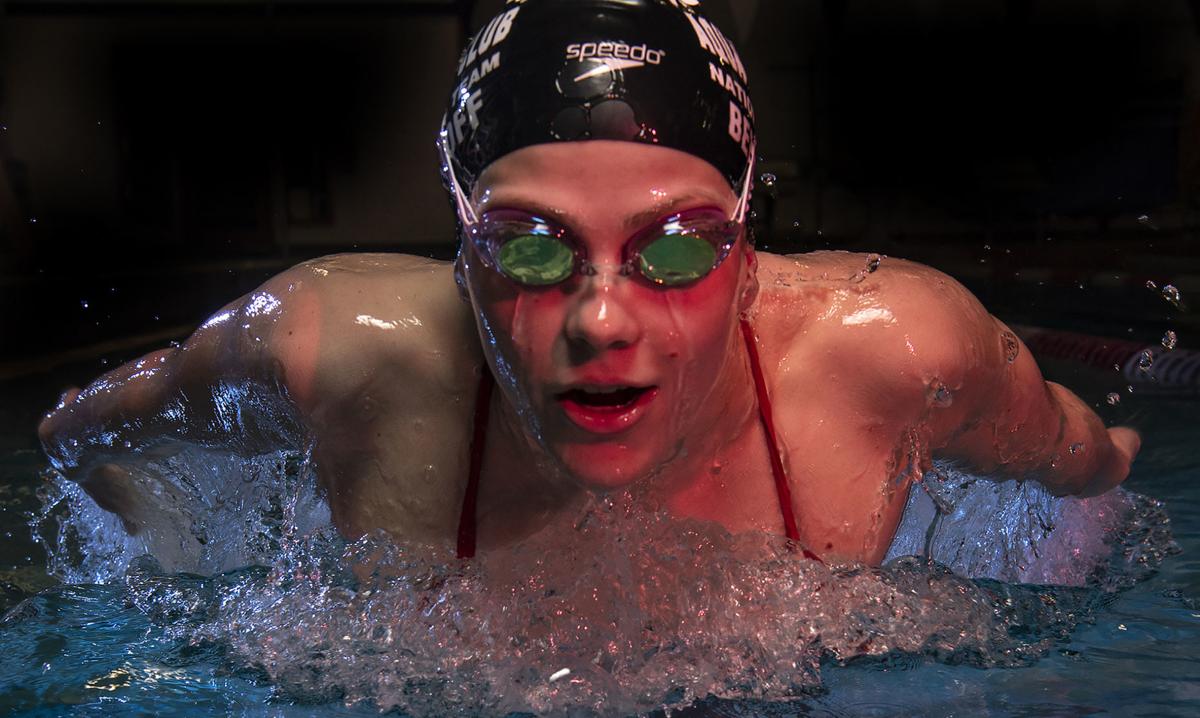 Now that her high school swimming career is over, Katharine Berkoff will compete in college at North Carolina State as she aims to make the Olympic dream a reality.

Missoula Hellgate's Katharine Berkoff swims in the Grizzly Pool on the University of Montana Campus Wednesday. Berkoff just completed her final season of high school swimming where she capped a career with 16 individual state titles and helped extend the Knights' team title streak to six.

Katharine Berkoff's dream and goal is to make it to the 2020 Summer Olympics in Tokyo. “It’s coming closer to the time when it’s going to happen so it’s a little freaky I guess but it’s becoming more serious and definitely it’s always on my mind. It’s always been a dream for me but I’ve been taking it very seriously especially the past four years.”

Now that her high school swimming career is over, Katharine Berkoff will compete in college at North Carolina State as she aims to make the Olympic dream a reality.

MISSOULA – Katharine Berkoff has a simple goal in life.

Qualify for the 2020 Olympics in Tokyo.

“The dream just started out young but I think it turned into more of a goal when I started getting into swimming in like fourth grade,” Berkoff said. “That’s when I started taking swimming really seriously.

“It’s coming closer to the time when it’s going to happen, so it’s a little freaky I guess. But it’s becoming more serious and definitely it’s always on my mind. It’s always been a dream for me but I’ve been taking it very seriously, especially the past four years.”

“It was a lot of fun. The memories are mostly the ones I have with my friends and that’s why everyone does high school swimming, because it’s really fun and social,” Berkoff said. “It’s always fun to be around everyone and it’s very team oriented and it’s a very good experience all around.”

It’s remarkable that Berkoff continued with high school swimming considering the load that comes with it. Some swimmers as talented as her opt to just do club, but Berkoff does both. In season, she’d swim with the high school team twice a week and her club, the Missoula Aquatic Club, the rest of the time. So she could practice 10 to 11 times per week.

Her specialty is the backstroke.

“I think her mental toughness (stands out),” Missoula high school swimming coach Helen Houlihan said. “Regardless of how she feels, she’s still able to go out and swim really well. She can mentally prepare herself and put aside some of those things that are challenging.

“She leads by example. There’s nobody as tough or successful. She wants to win and that’s a skill that not everybody is blessed with.”

Berkoff can be soft-spoken, but Houlihan said her standout shows a fun, social side at practice. She cracks jokes and enjoys being around her friends.

“She just has a great heart,” Houlihan said.

For her father, David Berkoff, who is a four-time Olympic medalist including two golds, it was bittersweet to see her finish this portion of her swimming career.

“It was sad in the sense that my youngest child is growing up,” David said. “As a parent, you miss all of those times that your child was a child and now they’re becoming an adult and going off to college.

“It means a ton just watching her success and really get to a level that I never got to at this age is amazing. I don’t see it slowing down.”

Her training schedule is a rigorous one now. Four times a week she practices from 5:30-7 a.m. Then five times a week she’d go from 3:30-5 p.m with Tuesdays and Thursdays extending to 6 p.m. Then she’ll swim from 7-9 a.m. on Saturday.

She’ll do three weight lifting sessions per week as well.

A heavy workload to be sure, but Berkoff has handled it in stride. She always knew she wanted to do high school swimming even with some added practices. She saw how much her older brother, Cale Berkoff, enjoyed it, so she followed suit.

She changed the landscape in Montana high school swimming. So now that her career for Hellgate is finished, what’s next for Berkoff?

She’s going to swim in college at North Carolina State beginning in the fall. Berkoff said she enjoyed the coaches and the team and the men’s and women’s squads combined for practices which she liked. At NC State, she said she wants to study something in the science field but isn’t sure what yet, though chemistry is her favorite subject.

But Berkoff knows where her true goals are at. She wants to go to the Summer Olympics in Tokyo in 2020 and in Paris in 2024. She said she thinks about those goals all day, every day.

So how does she keep herself driven to achieve all of this?

“Just in practice everyday and reminding myself why I’m there and the bigger goals and figuring things out,” Berkoff said. “I need to do it for myself too. I’m just super competitive too so I guess that helps.”

It’s funny because Berkoff admits she wasn’t crazy about swimming at first. She said in kindergarten through third grade she didn’t find swimming fun. Her parents told her she could quit, but she opted to stick with it because deep down she knew she wanted to go somewhere with it.

“It’s been kind of wild. Over the last four years, watching her grow and really sit down and say, ‘I have some big goals,’ and then not just say that but actually follow through on all of that stuff is really incredible,” Berkoff’s club coach, Jay Friend, said. “That’s what it is about her. She does those little things right every single day.”

Those little things include everyday life outside of the pool like eating right, getting enough sleep and taking care of homework. Friend, who swam in college at Fresno Pacific University, said he met people who qualified for the Olympic Trials, but Berkoff is on another level.

“I’m surprised by her two, three, or four times a week,” Friend said. “She’s a tremendous talent. She’s far exceeded what I thought that she was capable of and it’s her willingness to work hard no matter what.

But even as a kid her coaches saw the potential she flashed. High expectations have been put on her shoulders as she’s increasingly become faster and won more. Now at age 18, she ranks at No. 14 in the world – yes, you read that right – in the 100 backstroke. She accomplished that in Suva, Fiji on Aug. 23.

“She’s one of those rare, rare swimmers that come along,” Houlihan said.

And she’s handled those expectations well.

“I think being young makes it easier kind of because it kind of takes some of the pressure off because I feel like I have some time,” Berkoff said. “But at the same time, a lot of the top backstrokers are American so making the Olympics for the U.S. is very difficult.

“A lot of them are my age which is kind of crazy. So I guess it kind of puts the pressure on because I feel like if they’re doing it, I should be too.”

But with that pressure comes a learning lesson that Berkoff embraces as an athlete beyond her years.

“The most important part is to remember that the only person I can control is myself,” Berkoff said. “So if I always keep focused on my goals and what I know I can do then it’ll all come.”

David said he’s veered from being her swim coach to more of a swim dad. But watching her make the sport her own thing and find her own success has made him the most proud.

“I don’t think there was any one time where she thought she’d be something special. I think it was always an evolution,” David added. “I think it’s been a gradual process where she’s started to understand that she has that talent and drive and will to put in the hard work.”

“She’s a contender. She’s got a chance.”

Berkoff went to the Olympic Trials back in 2016. Getting back is her goal as she attempts to find success at each meet along the way.

But in her eyes, it’s clear what will be different between then and 2020.

“I knew I had so much room for improvement to get to that level that I want to be at,” Berkoff said. “There’s a big difference between Olympic trials and what it takes to make the Olympics. But I definitely think I can get there.”