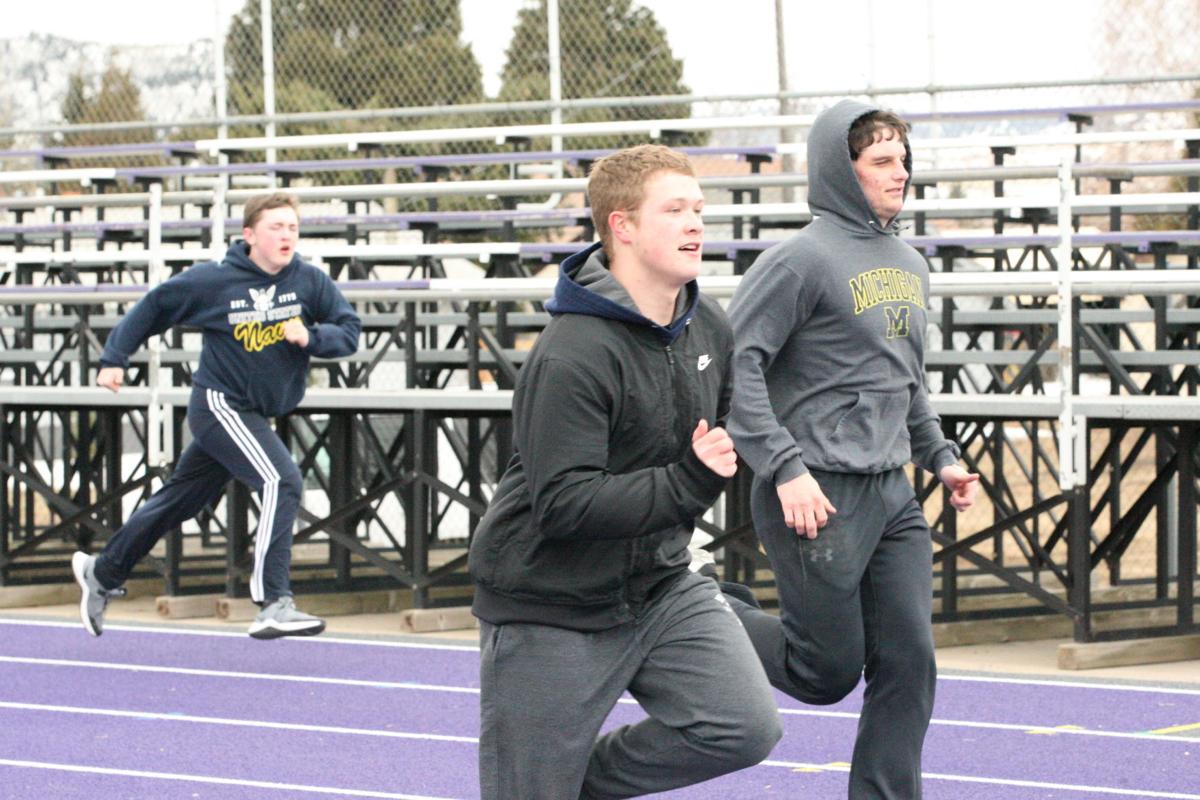 Members of the Butte Central track team run on the track in Butte on Thursday afternoon. 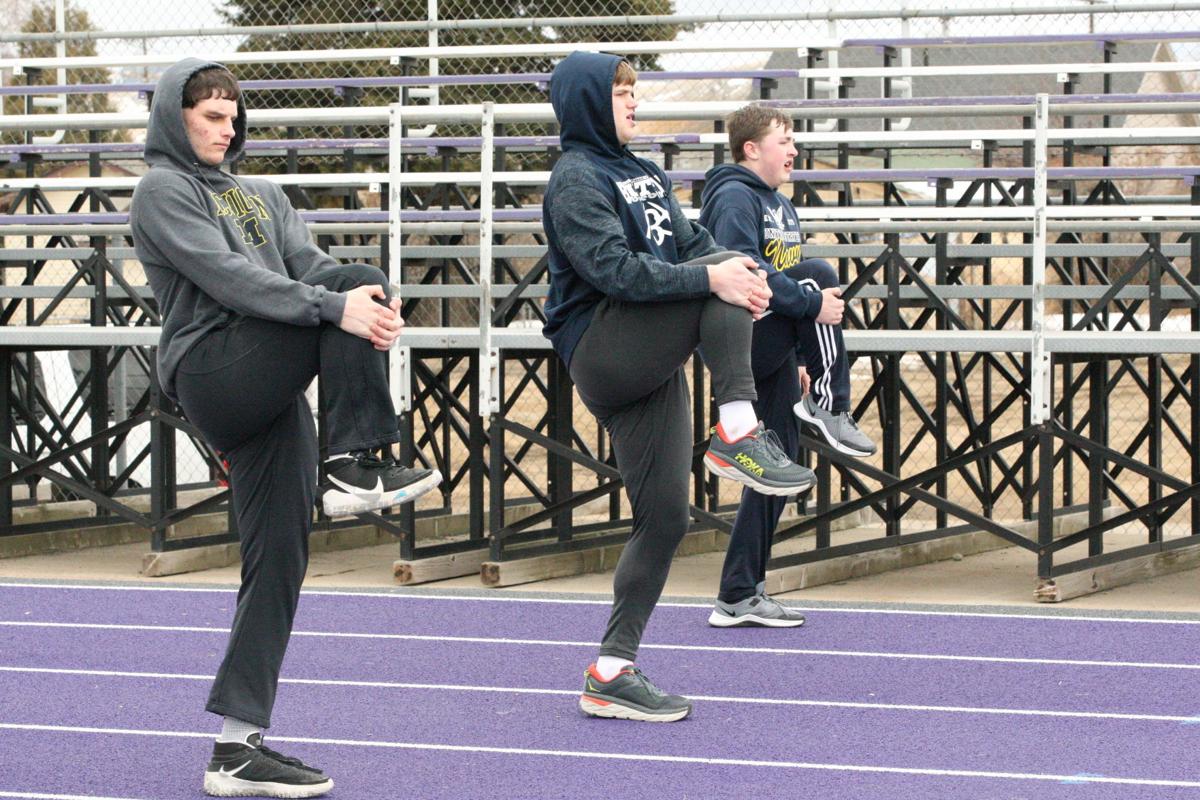 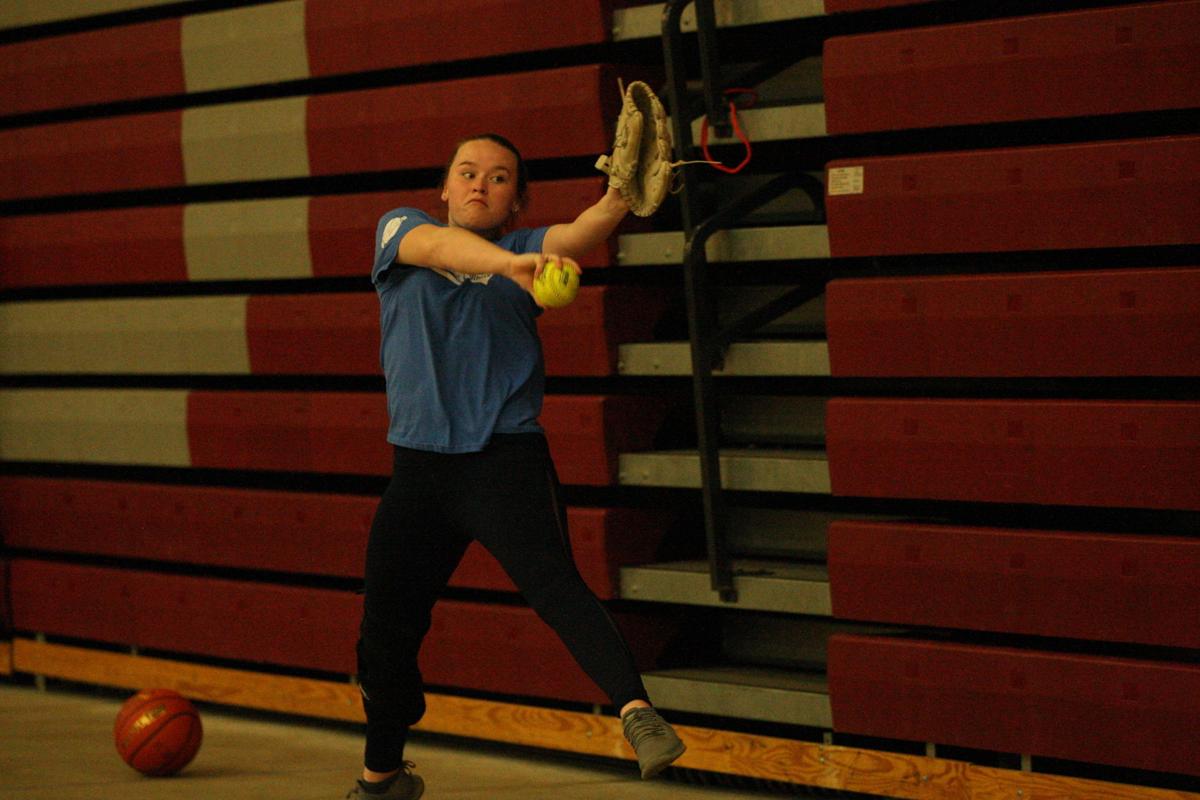 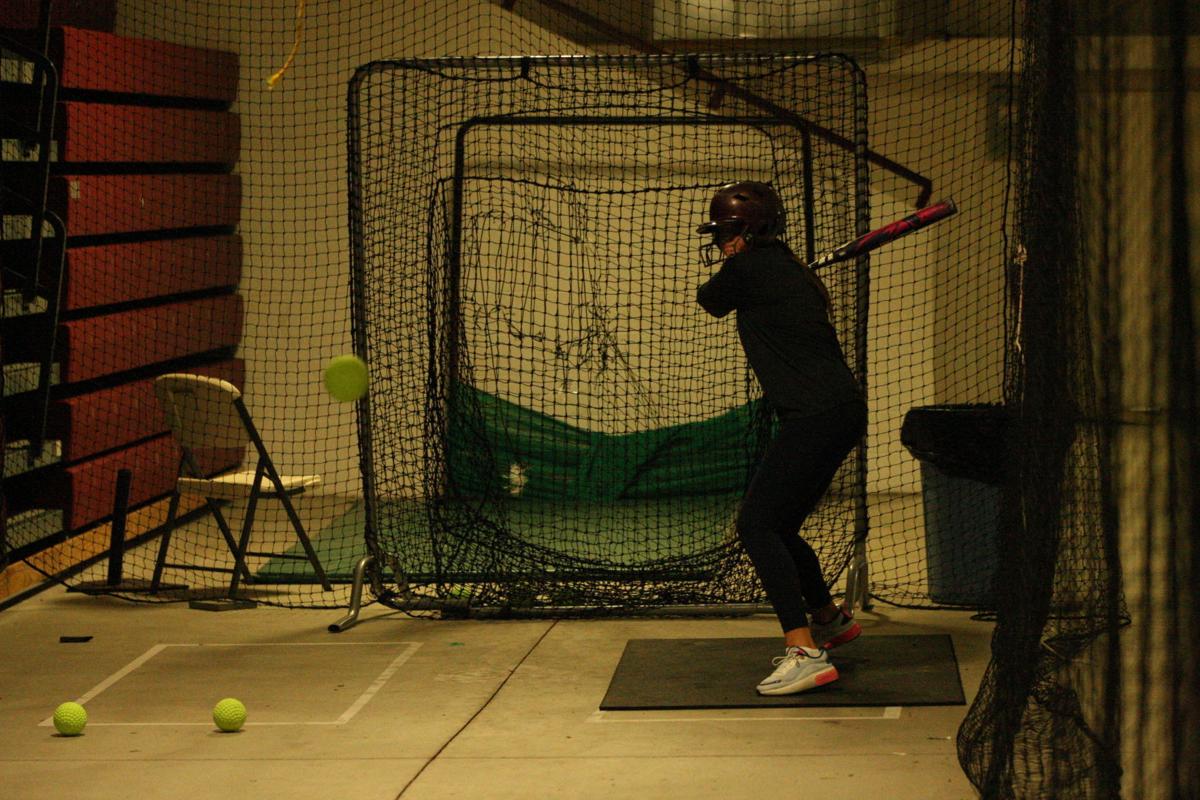 Members of the Butte Central track team run on the track in Butte on Thursday afternoon.

BUTTE — After the pandemic canceled springs sports last year, Butte Central athletes and coaches are prepared for competition in 2021, starting as early as this weekend for some teams.

Butte Central will dress track and field, tennis and softball teams this year. Coaches in all three sports have shown an optimistic uncertainty going into this year, as many of their athletes have not participated in competition in over 12 months.

The Maroons are scheduled to travel to Corvallis on Saturday for their first track meet since 2019, and coach Dan McGree said he was proud of the preparation his team took for the season.

This year's roster consists of 21 athletes, with 16 boys and five girls. After a year away from the sport, many of the athletes worked hard during the off-season to be ready for competition.

"The kids are working hard," McGree said. "We lost a lot of seniors last year but we've got some nice athletes back. The weather can make it hard, but that's how it is up here."

Senior Amira Bolton is an athlete to keep an eye on according to McGree. Bolton is a high-jumper and participates in the javelin event. She has already reached top-15 status in school history for the high jump.

On the boys' side, senior and Montana Tech football commit Egan Lester has shown promise in the long jump, 400 and 100 meter events.

"They're both great leaders, both great kids," McGree said. "I'm sure they're going to have a great year."

Bryan Holland and John Fisher are the only other seniors on the roster, giving younger athletes plenty of opportunities to compete and strengthen their skills.

Since last year's season was cancelled, McGree said it has been hard to tell where an athlete stands, since their most recent scores and times reflect that of their freshmen and sophomore year.

"I think it's hard with the weather, I've always thought that if it was warmer you have an advantage," said McGree. "But it might even snow in May so you have to be prepared."

"We have a nice number of kids, especially for having tennis and softball both going on in the spring," McGree continued. "It's really fun just having the chance to teach them, because they've made it clear they really want to try."

While some of the team will hit the track for the first time, McGree has been a part of the Butte Central track team for 30 years. McGree's daughter, Riley, is a junior on the team who placed sixth in the state in hurdles as a freshman.

Riley McGree had knee surgery recently but has fully recovered in time for the 2021 season. She was the only athlete at Butte Central to place in the state meet in 2019.

"At first we had 20 teams competing on Saturday but I believe it is down to 10 now," McGree said. "We'll be going out to Corvallis, Dillon will be there and I believe some of the Bitteroot schools will be there too."

The first meet has been scheduled to begin Saturday at 9 a.m. in Corvallis. After their first meet, the Maroons will not travel again until late April, thanks to a good relationship with the Butte High School track program, according to McGree.

The Maroons will compete in two track events in Butte with Butte High School on April 10 and April 15.

After more than 20 years of coaching summer youth baseball in Butte, Chunky Thatcher has taken the reigns as the Maroons' head softball coach this season, after last year's season was canceled due to COVID-19.

Thatcher said he has gotten to know most of his team in the past despite this being his first year as the high school coach. As his team builds chemistry, having fun has been an early emphasis.

There are two seniors, two juniors, five sophomores and four freshmen on this year's team. Practices have been underway, but have often taken place in a gym instead of a field due to weather conditions.

The team's goal is to be competitive according to Thatcher, but the goal for the first game will be about understanding the team's strengths and where they will need improvement.

"All I know is that we'll start this week and go from there," Thatcher said. "We've got a little bit more work to do. My infield is solid, got a couple young kids in the outfield."

The Maroons will play their first game on the road against Polson on Saturday at 1 p.m. Their second game will be at 4 p.m. the same day against Columbia Falls.

"You can't really gauge them until they're outside, they need to watch the ball come off a bat and just kind of feel it," Thatcher said.

The Maroons will play their first home game on April 6 at Stodden Park in Butte. Stodden Park will also be this year's venue for the state softball tournament.

The Maroons had three practices before COVID canceled their tennis season last year, but coach Becky Hancock and her team are excited to hit the court in 2021 with a shorter-than-usual roster.

15 girls and two boys will play for Butte Central this season. Participation on the boys' side has declined and multiple seniors have graduated, but that will not hinder the competitive spirit of the team, according to Hancock.

"Not having a season last year, a lot of these kids have not competitively played tennis," Hancock said. "We're young and inexperienced, but competitive. Looking at what we have to work with this year, there's a lot of players coming in who play other sports."

Juniors on the team have not played in competition since their freshman year. Marissa Anderson, Avery Kelly and Mati McGree are the three seniors on the roster.

Drew Badovinac and Nick Lester are the only boys on the team and have shown interest in playing doubles this season. Badovinac, a key player on this year's basketball team, will look to lead the boys' tennis team as a junior.

"I've got three seniors, they're pretty good players but they've had a year off and it's not their main sport," Hancock said. "I think it will start a little slow, but once we kind of get back into it, we'll see some of these players rise and peak towards the end."

Practices began at the Maroons' home courts at Father Sheehan last week. Hancock said most of the matches will take place at Father Sheehan, but the team will also practice at Stodden Park when the courts are available.

The Maroons' first match day will be in Dillon on Thursday April 8 at 2 p.m.. The team will return home on April 10 to play Park and will not have another roadtrip until April 20 against Bozeman's JV team.

"The boys are going to play together in doubles, and with girls we're young," Hancock said. "It's nice to see the competitiveness that these players bring to the court from other sports."

This is the second of 12 articles previewing the spring sports season for schools in The Montana Standard's coverage area.

Bill Thatcher has over 20 years of coaching experience within AAU baseball and softball circuits. He also coached basketball at Butte Central from 1995 to 1998