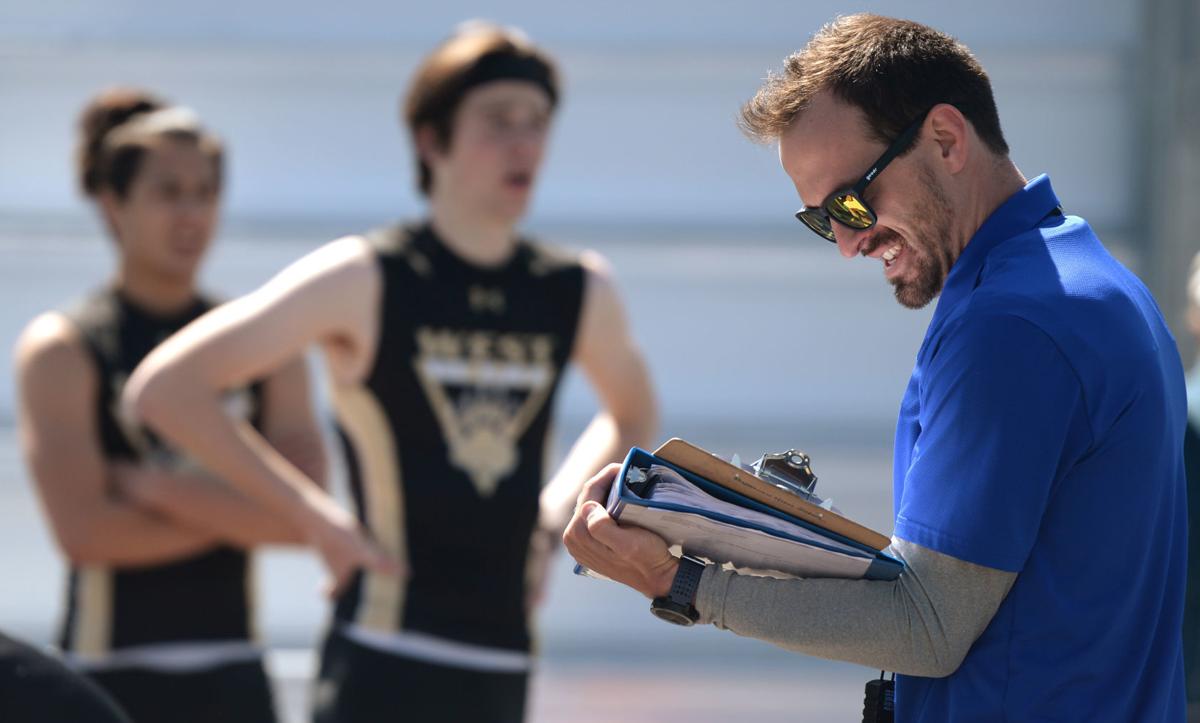 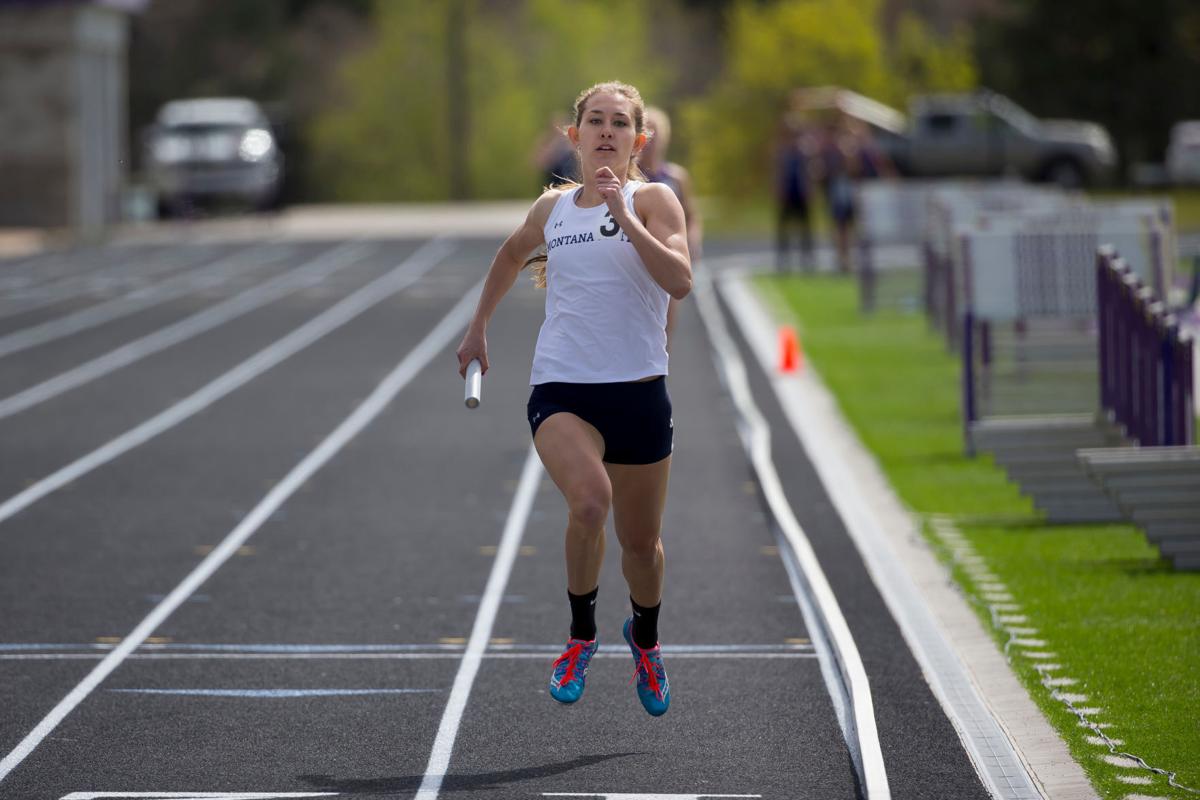 Chantel Jaeger competes in a relay for Montana State during the 2015 season. Jaeger is now the head coach of Gallatin’s track and field team. 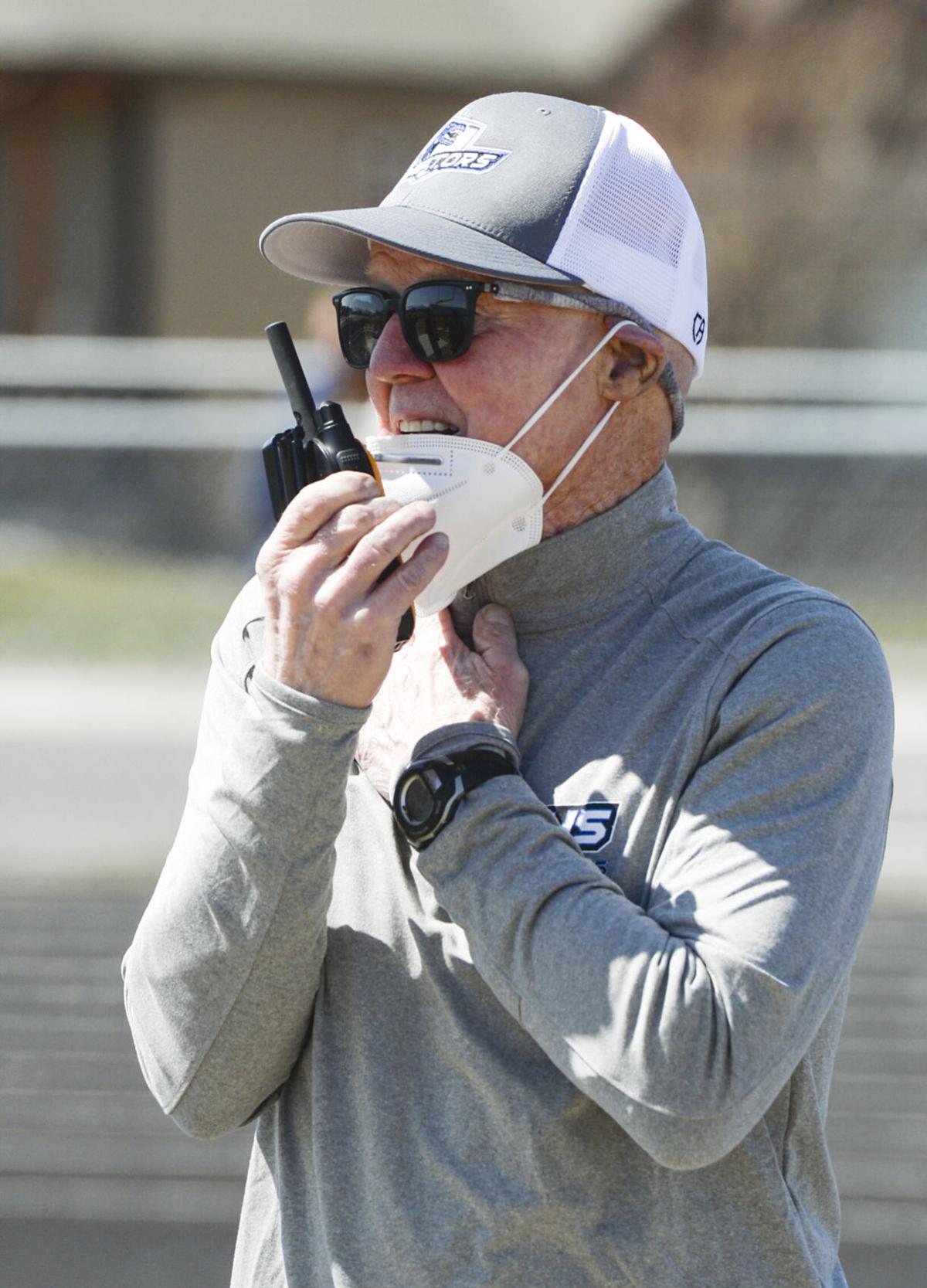 Dale Kennedy, a Gallatin high jump coach and the former longtime coach of Montana State's track and field and cross-country programs, speaks into a walkie-talkie during a dual meet against Billings West on April 17. 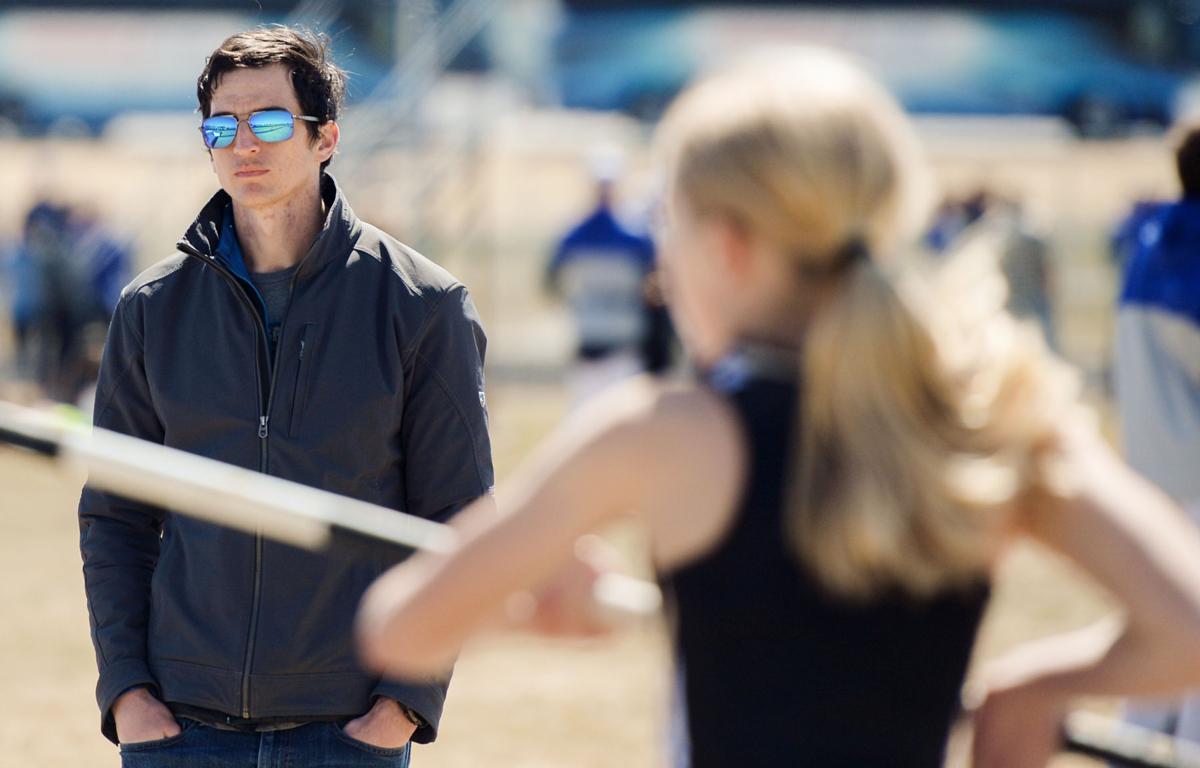 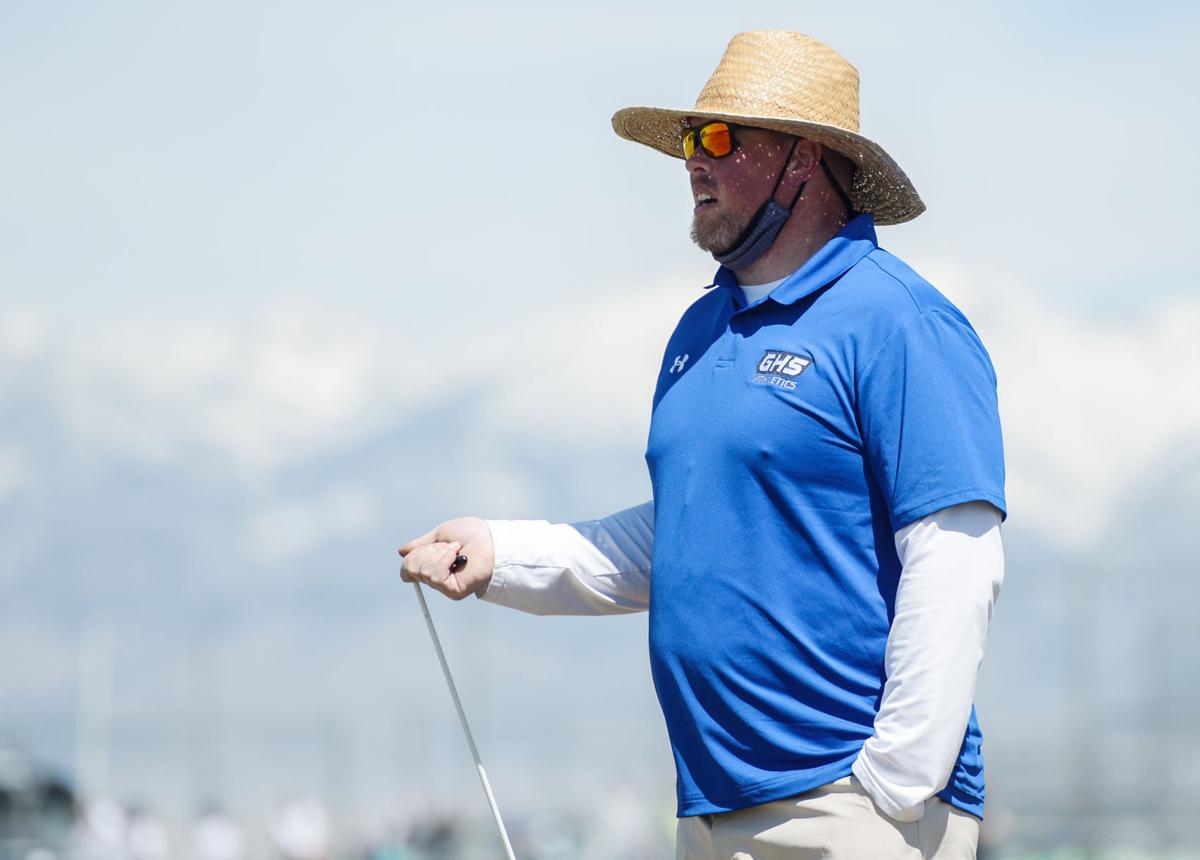 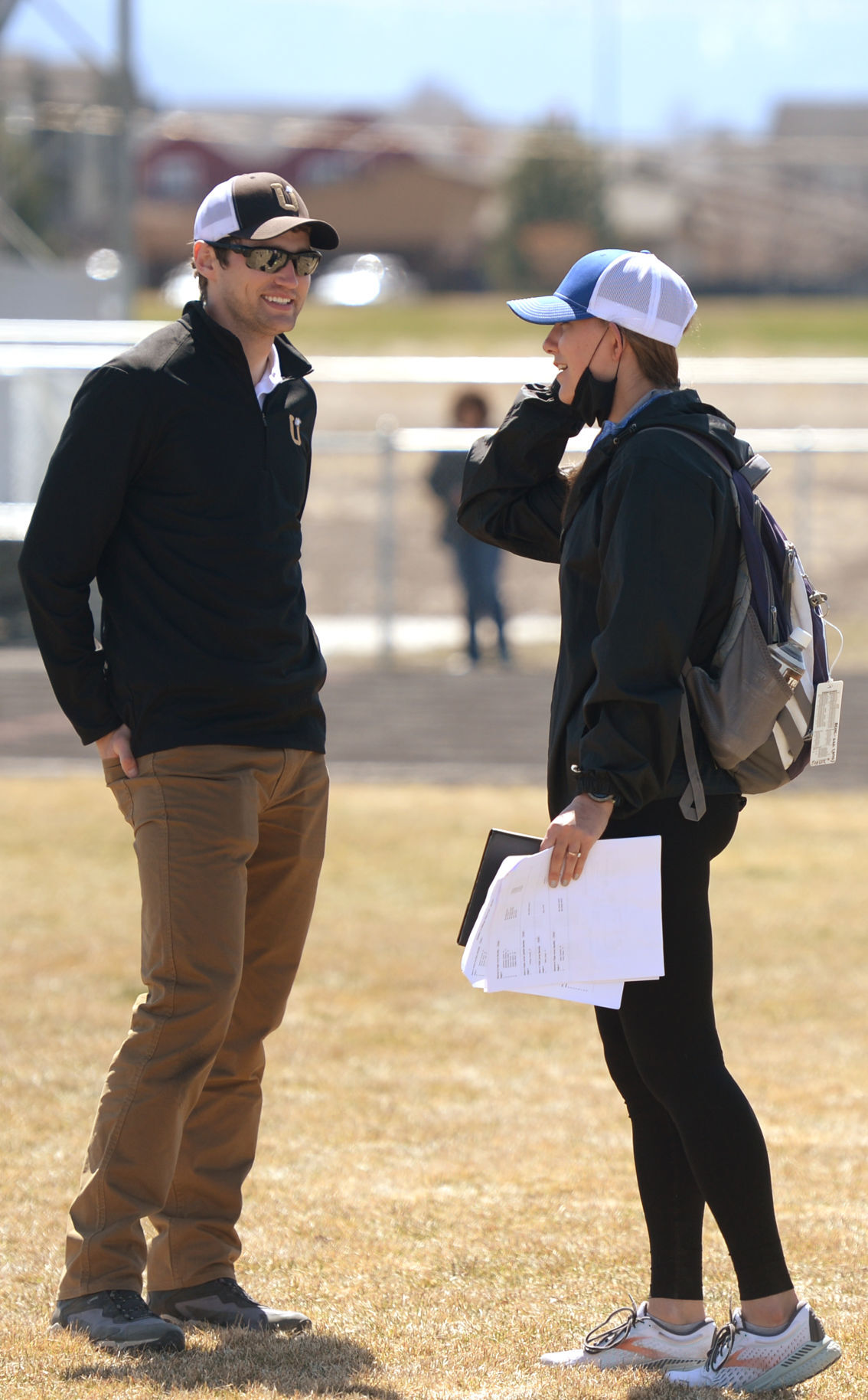 Chantel Jaeger competes in a relay for Montana State during the 2015 season. Jaeger is now the head coach of Gallatin’s track and field team.

Dale Kennedy, a Gallatin high jump coach and the former longtime coach of Montana State's track and field and cross-country programs, speaks into a walkie-talkie during a dual meet against Billings West on April 17.

BOZEMAN — Gallatin Raptors practices this year could reasonably be mistaken for a college reunion.

When head coach Chantel Jaeger was tasked with building a staff of assistants, she reached out to find references or learn who was in the area and looking to coach. What she assembled was a group largely made up of former Montana State athletes, much like herself.

Jaeger, who attended MSU from 2012-15, has the certification to coach any event. But sprinting was her specialty — she owns the women’s indoor and outdoor 200-meter records for the program — so she needed experts in other events.

“In order to have a successful high school track program in all event areas, you need that specialist in each event group in a perfect scenario,” she said. “Sometimes building a track coaching staff can be very difficult, especially when you’re trying to hire them all at once. That’s why these guys have been so reliable because I definitely can’t do it myself.”

Joining her on the Raptors staff are throwing coach Justin Jessop, who competed for MSU from 2002-04; distance running coach Dan Jackson, who ran cross-country and track from 2007-12 and holds the school record in the men’s indoor 5,000 meters; volunteer distance coach Graydon Curry, who ran at MSU from 2005-10; and volunteer pole vault coach Jeff Mohl, whose skill in various events helped him become a two-time all-American — for the heptathlon in 2013 and the decathlon in 2014.

“I wouldn’t be able to do it without them,” Jaeger said. “We take all of their experience and combine it for a good coaching staff.”

It also helps to have Dale Kennedy on hand as a high jump coach. Kennedy, the longtime cross-country and track and field coach for MSU, coached all of the aforementioned former Bobcats.

He is delighted to be sharing a new kind of experience with them. He is no longer their coach. Rather, he is a peer.

“Having so many former athletes out there coaching at any level, it’s really pretty special for me and my former coaching staff at MSU,” Kennedy said. “It’s rewarding for us.”

But to a certain extent, he is also still their coach.

“Now instead of coaching me on running, he’s coaching me on coaching,” Jackson said. “It’s so valuable for me as a new coach to have somebody with so much experience and somebody I’m so comfortable going to for advice.”

Jaeger was previously the sprinting coach at Bozeman High before Gallatin opened. She worked with Kennedy there also. Kennedy followed her to Gallatin because he was excited by the notion of building a new program from the ground up.

Jaeger modeled her coaching philosophy after what she gleaned from Kennedy, which she described as “athlete first, winning second.”

“We of course want the kids to succeed on the track,” she said, “but we’re looking for well-rounded young adults and giving them an experience in track and field that prepares them for their life in adulthood.”

Curry, who is Gallatin’s cross-country coach in the fall, said he also looks to Kennedy for advice on training and connecting with younger athletes. Further, he tries to carry himself in a similar fashion.

“The biggest thing I’m noticing is the consistency and the enthusiasm he shows up with every single day,” Curry said. “I think that’s a great tone to set for any young coach.”

The list of past MSU athletes coaching around the state extends far beyond Gallatin. It includes Casey Jermyn at Bozeman High, Chris Blomquist, Kevin Close and Zach Sharp at Billings West, Paige (Squire) Gilreath at Billings Skyview and many others.

The former Bobcats on the Gallatin staff did not all overlap in their time together in college, but they have the common thread of being coached by Kennedy. That in itself led to strikingly similar recollections of their MSU experiences and, in turn, desires to get into coaching.

“It was fun to be fast, it was fun to run well, it was fun to do so with our friends,” Jackson said. “And passing along that special opportunity, such a unique gift, is really important. It’s really special to be able to do that.”

Jaeger added: “I think it’s a wonderful sign that so many former athletes not only had a successful experience while at MSU, but also want to share that experience with the future of track and field.”

Kennedy, now 75, is unsure how many more years he’ll be able to volunteer. He jokingly said he could “die on the track or the cross-country trail somewhere, and I’ll be totally happy with that.”

For now at least, he’s happy to see some of his methods and lessons live on through the coaching of his former pupils.

“It means quite a bit to me to see them out there working in the sport that they love, that I love, that we’re so connected to,” Kennedy said.

He expressed confidence in Jaeger’s ability to take a program currently in its first year and turn it into one other Class AA schools will have to reckon with.

“I can sense we’re getting better every week,” Kennedy said of Gallatin’s athletes. “Within two or three years, this could really be something special.”

A week after qualifying for state, Gallatin's Olivia Collins hopes for more progress

Olivia Collins hasn’t reached 5 feet, 3 inches in the high jump yet. But she’s getting closer.