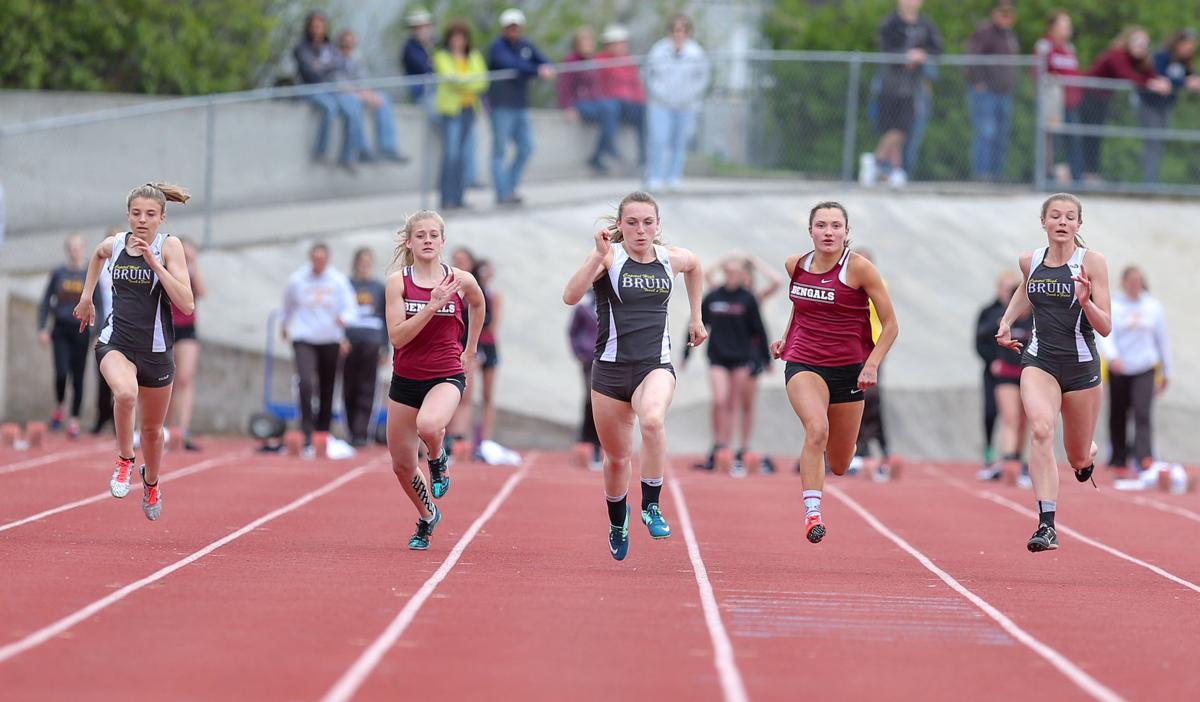 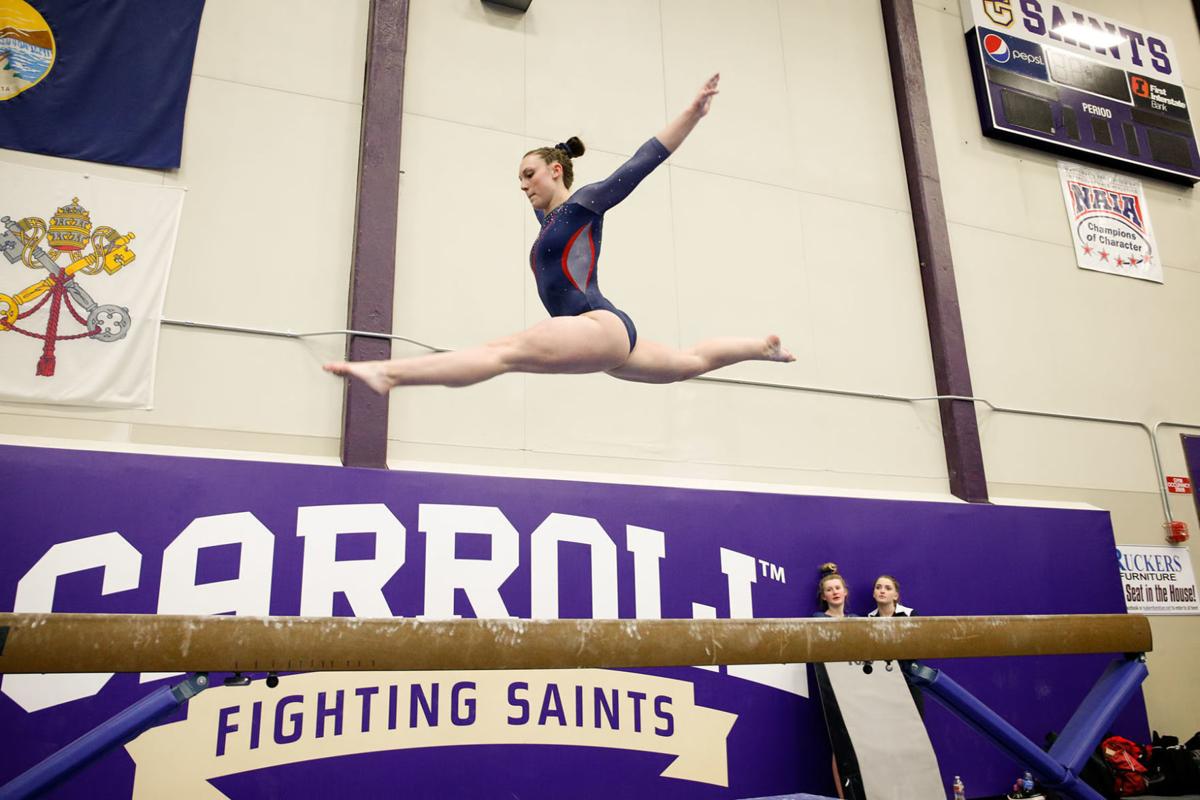 Helena Athletics Club’s Audrey Bloomquist performs her beam routine during the Montana State Gymnastics Championship March 15 at Carroll College. Bloomquist, who began competing in gymnastics at 18 months old and practices gymnastics 16 hours per week, said she is extremely proud of her gymnastics career.

Helena Athletics Club’s Audrey Bloomquist performs her beam routine during the Montana State Gymnastics Championship March 15 at Carroll College. Bloomquist, who began competing in gymnastics at 18 months old and practices gymnastics 16 hours per week, said she is extremely proud of her gymnastics career.

When Goody first had Bloomquist in her class, she was instantly reminded of another star from Capital, former Bruins basketball standout and current University of Montana player McKenzie Johnston, who anchored the Bruins to a 2015 Class AA state championship.

"I'll never forget meeting her when I heard about her," Goody said. "I knew she was an accomplished gymnast, and when she walked into the first day in practice, she just reminded me of McKenzie. I introduced myself, and from there on, I knew she was going to be a special kid."

With Bloomquist's accolades, the senior might be one of the most decorated athletes to compete at Capital since Johnston.

In the 4X100 relay with Leigha Carter, Elena Carter and Melissa Moreni, she recorded a time of 48.46 seconds in the Class AA state meet.

"I compare Audrey to Kenzie because in the classroom, they are the same person and they genuinely want to learn," Goody said. "Audrey is good at what she does. She knows statistics inside and out, just as well as she knows jumping or gymnastics."

Goody, a teacher at Capital for nine years and before that a teacher at Fort Benton for 10 years, summed up Bloomquist as a performer and person.

"You know Audrey is never going to give up, and she'll run through a brick wall for her team, for me, and head coach Dick McMahon," Goody said. "Sometimes, as a coach, I have to tell her 'no.' She is beyond one of the strongest kids I've known, and for me, I have to coach her in that sense because she doesn't want anyone to beat her. I have to remind her it's all about May at the state track meet. Sometimes you have to coach her differently than most athletes, and sometimes I have to look at the bigger picture. That is what ties her to Kenzie Johnston is (that) they are such competitors, which I love."

Goody isn't the only coach to rave about Bloomquist's athletic attributes. As a multisport athlete performing high-level gymnastics and participating in track and field events, her ability has impressed McMahon.

She's been the captain of her team going on her fourth straight year, qualified for the state meet and is a Level 9 regional qualifying gymnast.

"She was in the top 15 in about six different events," McMahon said. "She is not just good on the track, but she is a great ambassador for Capital High and has done a lot to represent Capital. It shows in her endeavors."

Bloomquist, who will head to the University of Colorado in Colorado Springs to continue her athletic career, continues to impress the Capital faculty with her outstanding achievements.

"She isn't just a great athlete, but she is a quality person, and I've never heard a bad thing said about her from competition or other, other competitors she has competed against," McMahon said. "She competes in everything. Sometimes, (as a competitor) I have to rein her back a little bit. She does everything so well, and you have to be smart with her on what we have to do. Every coach on our staff would love her to do every event, but we have to share I guess, and that is what will make her a fantastic athlete at the college level."

Bloomquist, who began competing in gymnastics at 18 months old and practices gymnastics 16 hours per week, said she is extremely proud of her gymnastics career that is close to winding down.

Bloomquist started competing in track in sixth grade — later than some competitors — running in the 100, 200, and 4X100 relay. Once she went to high school, she added long jumping, triple jumping and throwing events to prepare for when she arrives in college.

As a gymnast, Bloomquist competes in all-around but downgraded from Level 10 to Level 9 to put more of an emphasis on her track career.

"The biggest part of managing sports is that you are using different muscle groups in each sport," Bloomquist said. "You are doing strength, conditioning and endurance. When I am doing my track training this week, it is difficult to balance, but the strength I've developed in gymnastics makes it a little easier."

Bloomquist has balanced both since her freshman year.

"Managing (both sports) for four years, sometimes there is an overlap between my track and gymnastics and this season gymnastics has continued into the track," Bloomquist said. "That is the pretty strenuous part of being a multisport athlete."

Back to the future

After this season, Bloomquist's career in gymnastics will begin to wind down.

"Gymnastics will end after this season, and I'll be focusing on track as far as the season goes," Bloomquist said.

Bloomquist, who choose to attend the University of Colorado in Colorado Springs, had figurative mailbags of prospective collegiate athletic programs wanting her to join them but she chose the NCAA Division II school for more than the athletic program they offered.

"They have an excellent sports management and marketing program at UCCS," Bloomquist said. "That is a degree-specific qualified program. I have family members in the Colorado Springs area, and it just felt like a second home. I am ready for that new adventure, and Colorado is similar enough to Montana. It just all came together because it was the school and program that I wanted."

Bloomquist's primary goals are to capture the relay title at state after placing second at the event and be in the top three at triple jump.

"I think my whole team is a special group of girls," Bloomquist said. "We can achieve that goal. It will be a great event because it offers a team mentality. It would be great to win and succeed for all of my teammates."

That is what the coaches say makes Bloomquist special, her unselfish nature as a teammate. This year she hopes her relay team will be hoisting up a state championship trophy.

Outlook: The team is young this year, but as usual, according to Bruins coach Lon Carter, they should have plenty of younger talent that by the end of the season will emerge, and showcase the team's athleticism. "We have a bunch of new kids (out for track) this year," Carter said. "I think we will be pretty competitive, and you never know about the Class AA level, there is always some young man somewhere that has the potential of doing some pretty unbelievable things ... We will have to see where it all plays out." Carter is high on distance runner McMurtrey, who showcased a lot of potential during last year's track season. McMurtrey finished seventh in divisionals with a time of 10 minutes, 5.31 seconds, a personal record. This year, Carter expects more from McMurtrey, who runs the 800 meters, 1,600 and 3,200 relay.

Outlook: The team has a talented roster all across the board, and despite being young, the Bengals will field a highly competitive team. The roster boasts three returning participants who qualified for the state meet last year. Of the three returning state placers, the Bengals have one of the top high jumpers in the country in Tintinger. During the BTC all-comers showcase, Tintinger cleared an impressive distance of 6 feet, 10 inches, a personal record, which should allow him to be one of the early favorites to capture the high jump state title. Last year, Tintinger captured the state high jump title, clearing a distance of 6-9, enough to achieve the state title by an impressive two inches. The other state returners for the Bengals include Spiroff, Schmitz and Murgel, all relay runners who competed at state. Spiroff, was a member of the Helena High team that finished eighth, recording a time of 43.84 seconds. Murgel and Schmitz were members of a 4X400 relay team that finished seventh, recording a time of 3:29.60.

Outlook: Bloomquist is a threat to win any event she attempts. She will anchor the 4X100 relay team that set a school record and finished second at the Class AA state meet last year. Their big hurdle will be Billings West, which boasts another strong returning lineup. Behind the efforts of Bloomquist, and others, Capital should be in contention to not only have a strong track season but also compete for state hardware moving forward.

Outlook: The team may be young, but their lineup boasts plenty of returners headed into the season. The team has a couple of athletes who are signed with the Carroll College track program, including sprinter Maes and distance runner McKay. They also boast of several Class AA state senior returners including Plumber, at the shot put.

HELENA — Audrey Bloomquist signed her letter of intent on Wednesday to compete in track and field at the University of Colorado Colorado Springs.