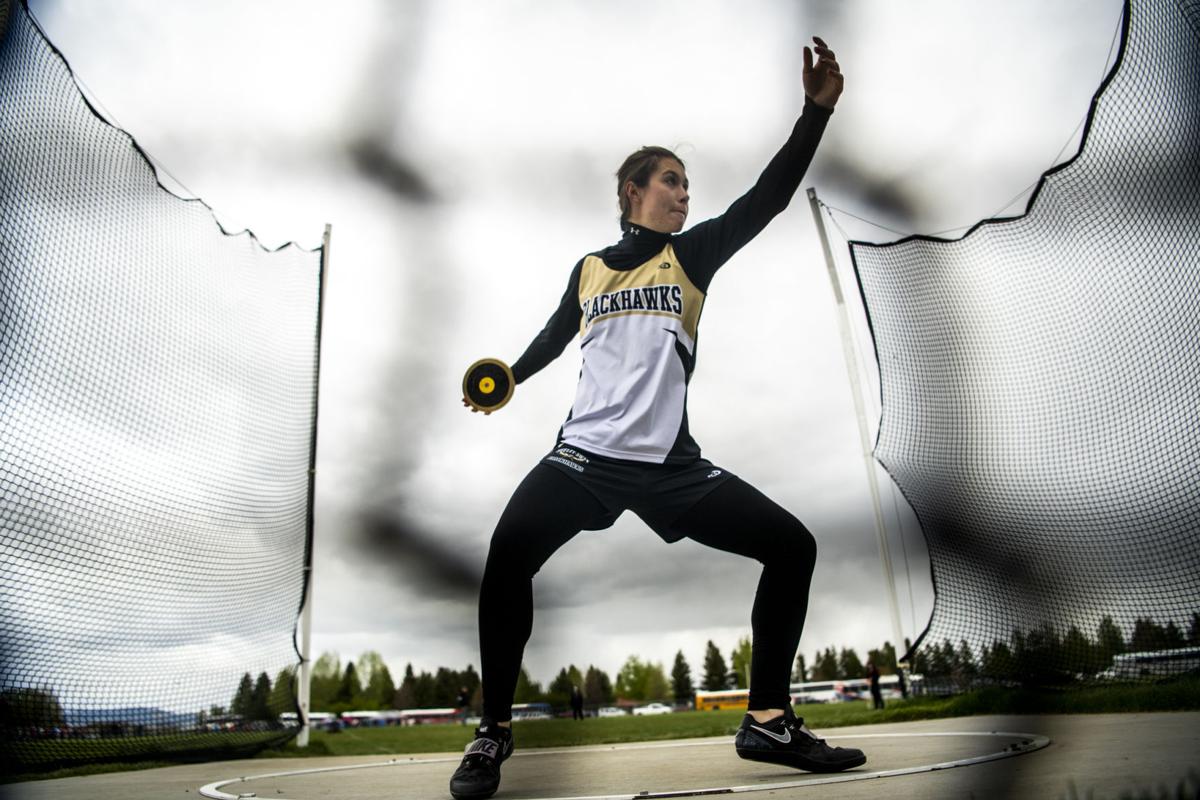 Seeley-Swan senior Klaire Kovatch competes in the discus during the Kim Haines Memorial track meet Saturday at Missoula County Stadium. Kovatch is a Colorado State track signee and has the 11th-best discus throw in the United States this season. 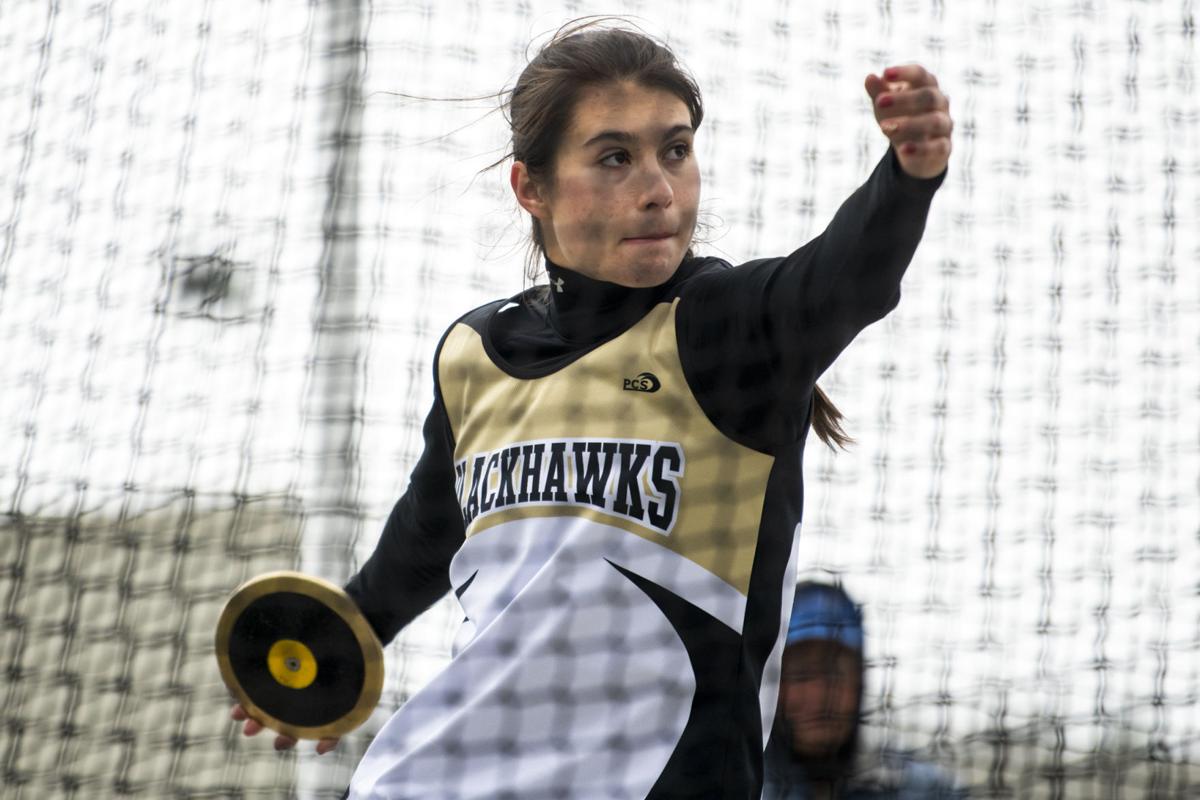 Seeley-Swan senior Klaire Kovatch competes in the discus during the Kim Haines Memorial track meet Saturday at Missoula County Stadium. Kovatch is a Colorado State track signee and has the 11th-best discus throw in the United States this season.

MISSOULA — Klaire Kovatch has committed to Colorado State for track and field. She is a two-time Class C state champ in the discus. She is the best discus thrower in Montana and entered Saturday 11th in the United States, but the Seeley-Swan senior isn't done adding to her athletic accomplishments and writing her story.

She likes to win, simple as that.

The three-sport star threw a Montana-best 159 feet, 3 inches at the Bigfork Invitational on April 3, shattering her previous best of 150 feet, 2 inches. Her personal record is good for 11th in the nation, trailing the top 10 by 5 inches. The nearly 160-foot toss came in the second meet of the season and stands as the best throw in the state by a wide margin.

The next-closest toss by any athlete in Montana belongs to who else but Kovatch. She threw 158 feet and 10 inches at the Sapphire Twilight Meet on April 22, nearly getting back to her best mark. The next-closest by an athlete not named Kovatch is by Lewistown senior Kylie Zimmer at 145 feet, 6 inches.

There is a new challenge on deck for an already decorated athlete who has excelled at every sport she touches. Kovatch, and her father/throwing coach Kalvin Kovatch, said during Saturday's KLH Memorial Meet at Missoula County Public Stadium that the next step is to get into the 160s and, like all track and field athletes, make sure she is peaking in time for the Western C divisional May 21-22 and the state meet May 27-29.

"I've kinda been struggling lately as far as being consistent," she said. "But that comes at the end of the season. You don't want to peak until you get to state. I think I'm right there. These meets are important for competition throws, but other than that, practice is where you learn that consistency."

If Klaire can get her throws into the low 160-foot range and up her best by about four feet or so, she could propel herself up to sixth in the nation.

Klaire didn't have her best day Saturday with four faults. Her only recorded toss didn't come anywhere close to her expectations despite her toss, 133 feet, and 1 inch, was good enough for the best mark of the day.

But the abnormal outing didn't seem to faze her during a chilly and windy morning at MCPS. Klaire understands she needs to be at her best when the divisional and state meets roll around, and while these meets are good for a chance at competing, she and her dad will figure out the adjustments come practice.

She is as detailed and task oriented as any athlete. Klaire and her dad inspect film at home whenever one of them notices the slightest of ticks or adjustments that can be made. From there, they get to work.

"If he sees some film or something, we can go over it at home, and all that homework he does at home, I can be right there listening in if we think it is really important," Klaire said. "That's nice, plus the fact that we don't get to hang out much in the other seasons, which is a bummer, but for track, it's like 'He's my coach, he gets to come out to all the meets and he is here all time,' and it is great because we get to spend all the time together."

Kovatch, just like all spring sport athletes, felt the sting of the COVID-19-canceled 2020 season. She was primed to repeat as Class C state champ in discus for her third title in as many seasons, and she could have potentially been a four-time winner if things went her way this year, but she seems pretty excited for a chance at three.

"It would be super cool to be a four-time state champion, but it's just not going to happen," she said. "But, yeah, three time? Yeah, that's good."

It also seems that missing an entire season gave Klaire an extra jolt heading into that Bigfork meet.

When she let the nearly 160-foot throw go, she knew it was good, like any thrower would when they let a strong throw loose.

Her dad knew it too.

Plus, Kalvin said, getting a meet with nice weather was good.

She ultimately chose track, where she isn't just a discus thrower.

Klaire took first in the shot put Saturday with a throw of 33 feet, 4.5 inches.

She has thrown the shot put only twice this season but qualified for state after her first time throwing it in a meet, and it wasn't always planned that she would do it. She and her father figured "why not," and she competed at the Fairfield Belt Invite and the Western A-B-C Top Ten Meet with noted precautions to not get hurt doing an unfamiliar event.

"It mostly was 'let's experiment with it,' and she looked good in practice and was hitting some positions," Kalvin said. "She was looking good, so we thought to try it, and it worked out great."

Seeley-Swan's Klaire Kovatch is heading to the Mountain West Conference to compete in track and field, and she'll make it official on Wednesday during National Signing Day.