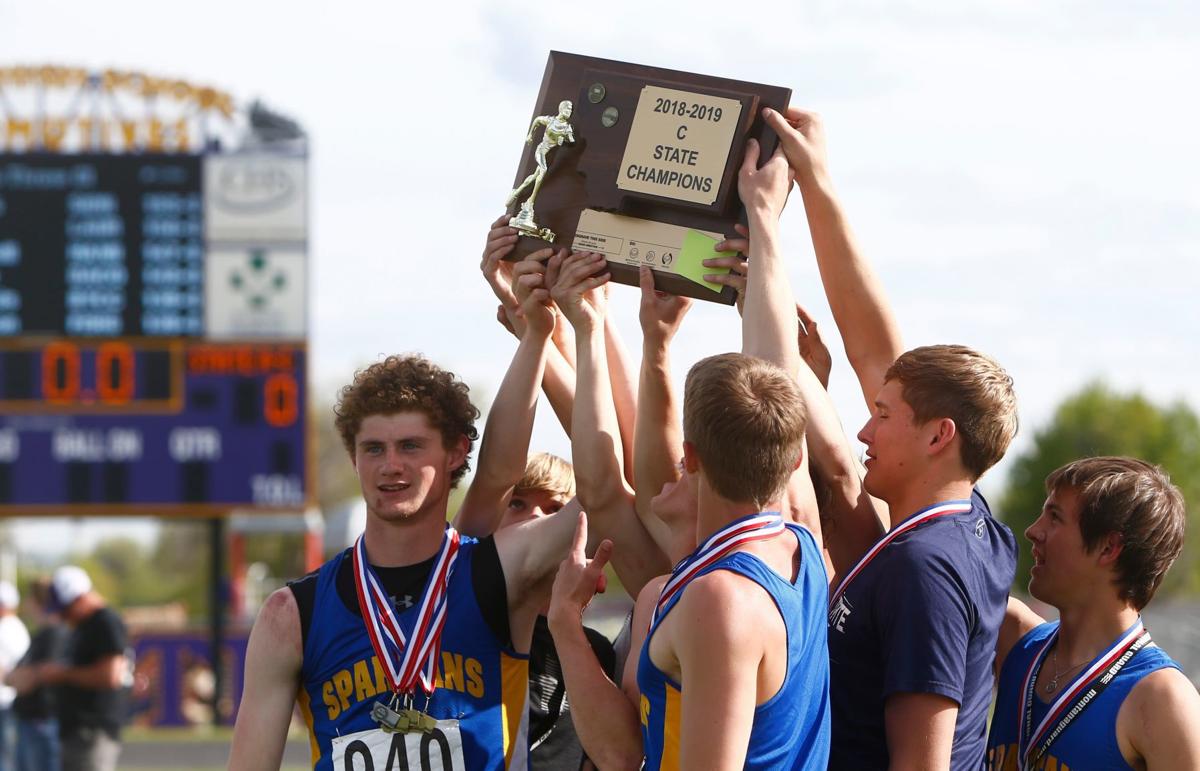 The Scobey boys track and field team reacts after receiving the first-place trophy at the State C track meet at the Laurel Sports Complex in Laurel on Saturday. 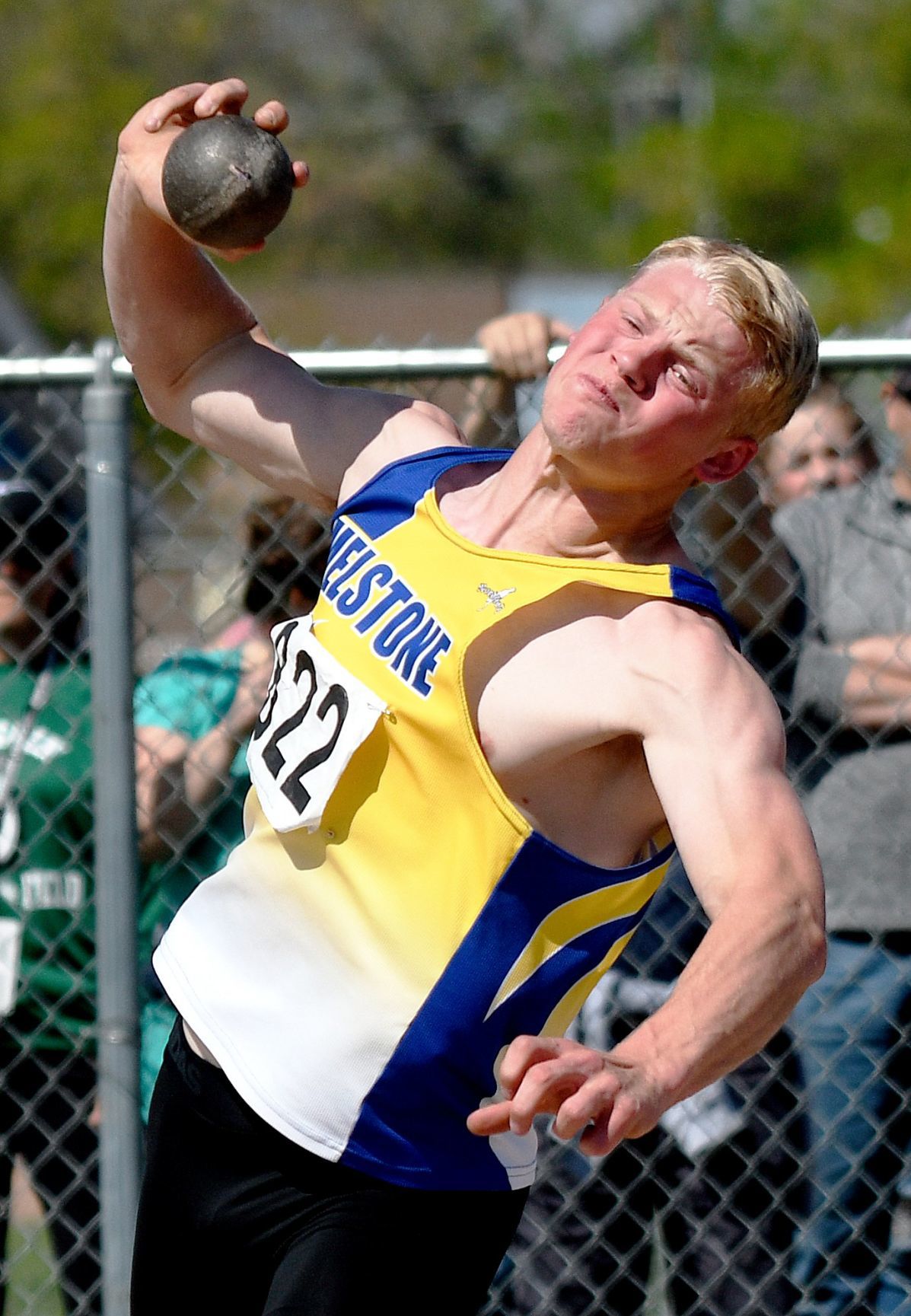 Melstone's Brody Grebe competes in the finals of the boys shot put at the State C track and field meet in Laurel on Saturday.

The Scobey boys track and field team reacts after receiving the first-place trophy at the State C track meet at the Laurel Sports Complex in Laurel on Saturday.

Melstone's Brody Grebe competes in the finals of the boys shot put at the State C track and field meet in Laurel on Saturday.

LAUREL — Among all of the gold medals and top marks achieved by the Scobey boys track team this weekend, an individual second-place finish was one of the most impressive performances of the State C meet.

Spartans senior Brandon Machart came in with a personal record of 23.39 seconds in the 200-meter dash — seventh in the boys field. Merely reaching the podium would have been progress.

He not only broke his PR, he ran the 200 in 22.83 seconds on Saturday at the Laurel Sports Complex. Machart’s time was second only to his teammate, fellow senior Martin Farver, and it proved to be important on a larger scale: Scobey earned its first State C boys championship since 1996.

“I knew it was possible,” Machart said. “(A high finish) is what I prepared my body for, and it paid off.”

Scobey senior Martin Farver wins his third gold medal of the State C boys meet and sets a PR in the 100-meter dash with a time of 11.00 seconds, 0.04 seconds short of the C boys state record. @Melstone_Broncs’ Brody Grebe was second at 11.15. #MTscores pic.twitter.com/y5mbqRkuDh

Going into the weekend, Farver hadn’t earned a state gold medal in his career. The senior fell as he crossed the finish line in Friday’s 400 win, causing scratches and scrapes that drew blood and limited him to about four hours of sleep Friday night.

“I’ve been kind of tired all day,” Farver said after his 200 win. “(But) a good day. Some added adrenaline and some really good competition.”

Larry Henderson was Scobey’s coach when the boys won their first team title in 1996. Now he's in the same position 23 years later. The 2019 title packed extra weight for the Spartans considering last year’s result — Ennis edged Scobey by two points for the championship.

“That’s only the second title in our school’s history, so it’s kind of awesome to be a part of both of those,” Henderson said.

Henderson highlighted senior Jeremy Handy as another key contributor to the team title — Handy placed third in the boys shot put with a personal-best throw of 48 feet, 10¼ inches. But the 200 stole the show, for the Spartans and the spectators.

Farver and Machart benefited from the absence of Seeley-Swan senior Logan Robinson, who entered the weekend with the second-best State C boys 200 time (22.73) but didn’t compete Saturday because of an injury, per Blackhawks coach Michael Haines.

The third-best 200 runner, Melstone’s Brody Grebe, saw his gold medal hopes dashed when he was disqualified for a false start. At first, Grebe didn’t think he was the runner in violation. Then an official called out Grebe’s lane number, and the senior burst into tears.

“I wanted to get a good start,” he said. “When they said it was lane five, I just broke down. It was tough.”

The false start will stick with Grebe, who plans to play football and basketball at a Connecticut prep school next year and possibly run track. But overall, Grebe is pleased with his weekend. He placed first in the long jump on Friday and celebrated his 19th birthday on Saturday with two more gold medals.

First, Grebe set a personal and school record in the shot put. His first throw was downgraded from 51 feet, 7 inches to 51-05 ¾ after meet officials re-measured the mark with a steel tape. They took the extra measure because they thought Grebe had broken the Class C boys record, based on the meet handbook. But the record was mistyped as 50-07 ½ instead of the actual mark: 56-07 ½.

Grebe’s 51-05¾ throw was not topped by any of his opponents, so he went into his final throw with nothing to lose. He decided to “huck it out there as far as I could,” he said, and he didn’t scratch. The shot put traveled 51-7.

On his final throw of the State C meet, @BrodyGrebe breaks his previous best shot put mark and the @Melstone_Broncs record with a 51-7. He had already sealed the gold medal, so this throw was purely a bonus. #MTscores pic.twitter.com/dw9zHUSVmX

“Gonna go out of here happy with my career,” he said.

The Blackhawks earned many medals in between those two events, en route to a dominant result in the girls team standings. They finished with 90 1/3 points, followed by Charlo (48), Fort Benton (43) and Winnett-Grass Range (36).

It was Seeley-Swan’s first state girls title since 2014 and eighth overall.

The Blackhawks nabbed most of their gold medals before Saturday. First there was Bertsch, then freshman Sariah Maughan won the 1,600 and sophomore Klaire Kovatch rolled in the discus.

The 1,600 victory was one of two from Seeley-Swan on Saturday. Senior Autumn Morse earned the other in an emotional javelin competition.

Morse picked up javelin last year and set her PR last week at the Western C divisional meet. That personal-best mark, 125-03, was topped by Hot Springs freshman Katelyn Christensen during the finals Saturday. Morse had two throws to out-throw Christensen and best her own PR by more than two feet.

Before Morse’s second-to-last throw, her coach told her to “throw like it’s gonna hurt,” Morse said. She threw as hard as she could and her javelin landed 130 feet, 11 inches away.

Morse cried tears of joy as she attempted her final throw with her first and only gold medal guaranteed.

“I usually say thank you to the people who give my javelin back, but I was just speechless. I couldn’t even talk,” she said.

Seeley-Swan is more than 300 miles west of Laurel, a drive of at least five hours. The Blackhawk track team took the bus home on Saturday night.

Other highlights on Saturday included:

• Winnett-Grass Range junior Zoe Delaney earned her second and third gold medals of the meet with PRs in the girls 200 (25.92) and the 800 (2:21.15). She felt especially motivated for the 200. About an hour earlier, Delaney finished third in the 100 after winning last year and finishing second in 2017. She won the 200 as a freshman and lost to Manhattan Christian’s Alex Veltkamp last year in a photo finish (both ran in 26.00).

• Averi Parker of West Yellowstone set a PR in the girls 3,200 with a time of 11:51.19, more than 23 seconds faster than second-place finisher Gracee Lekvold of Scobey. It was her second straight 3,200 state title, which she earned less than two hours after failing to go back-to-back in the 1,600. She placed fourth in the one-miler with a PR 5:26.69.

• Valley Christian senior Ben Tuinstra did a somersault over the finish line of the boys 110-meter hurdles, ending up with a gold medal and PR 14.89 (0.02 seconds faster than Scobey’s Martin Farver).

• Denton-Geyser-Stanford senior Cassidy Randel won the girls shot put with a throw of 38-1½.

CORRECTION: A previous version of this story misstated the number of girls team titles for Seeley-Swan. That error has been fixed.

Photos from the MHSA Class A and Class C state track meet in Laurel.