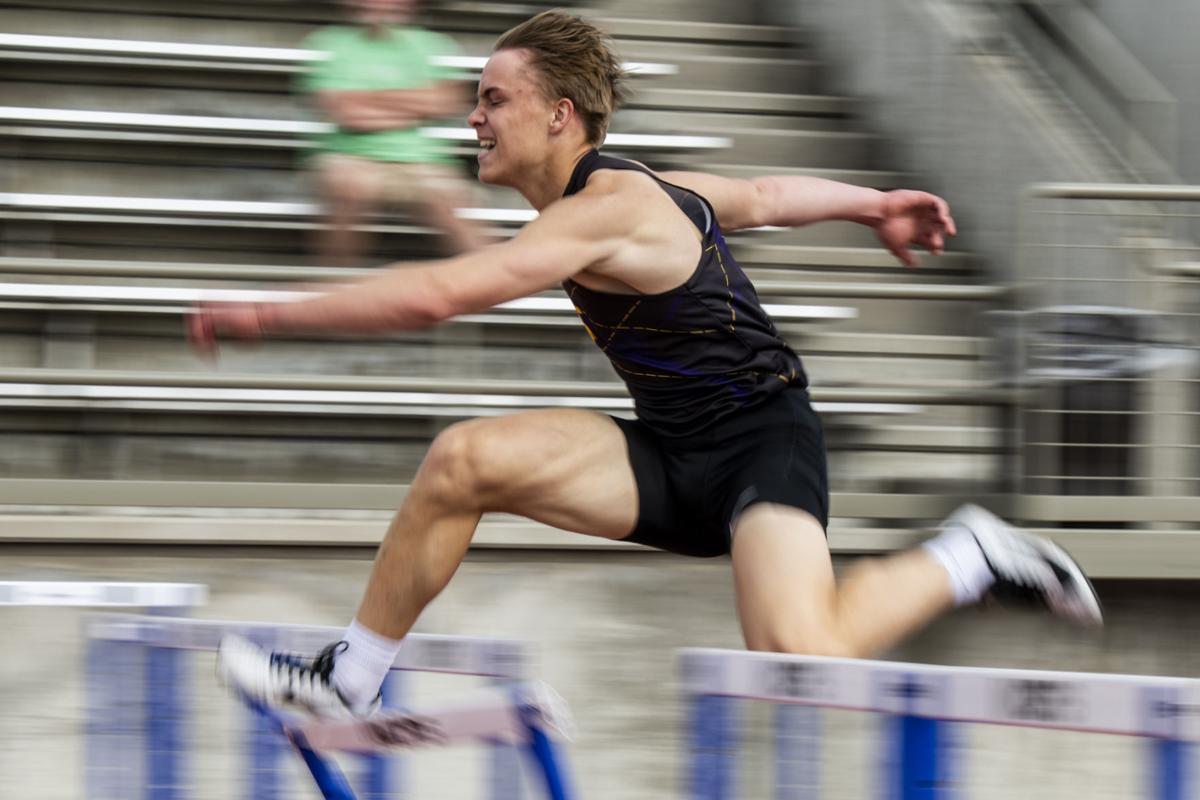 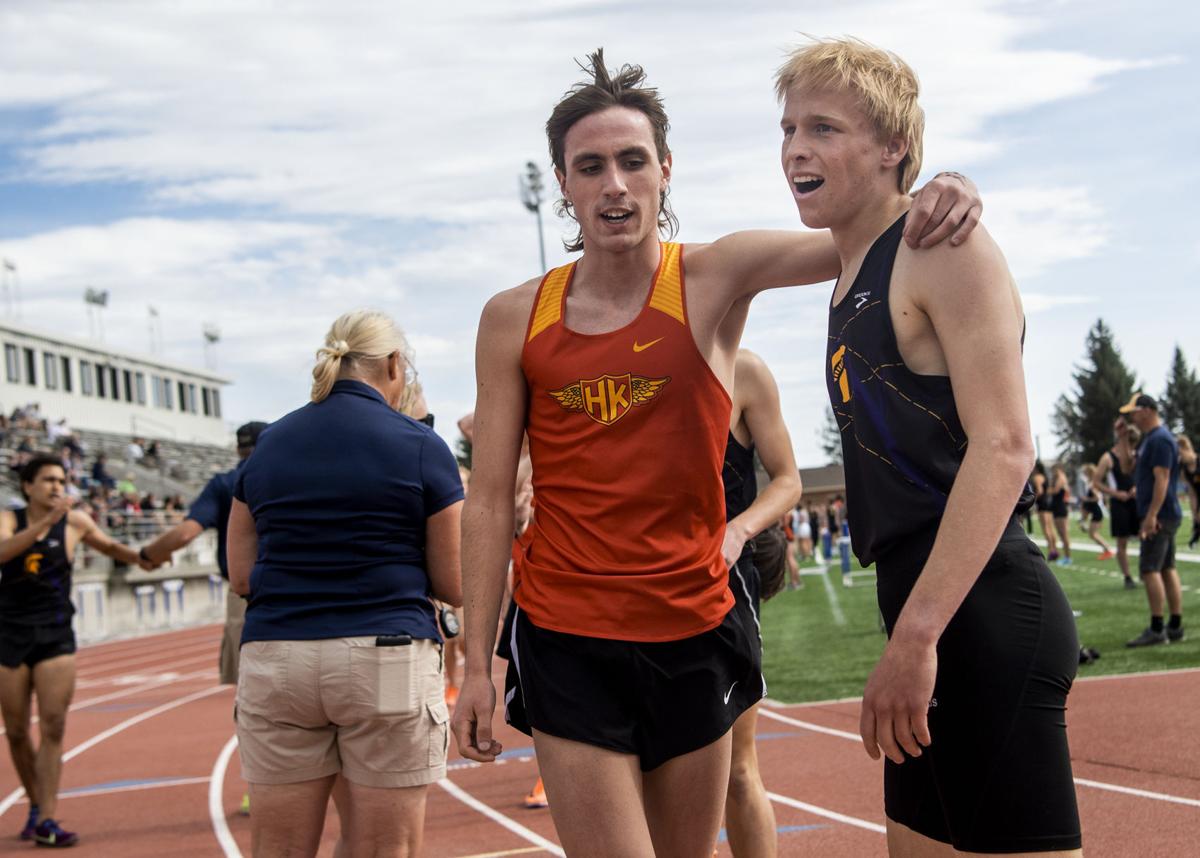 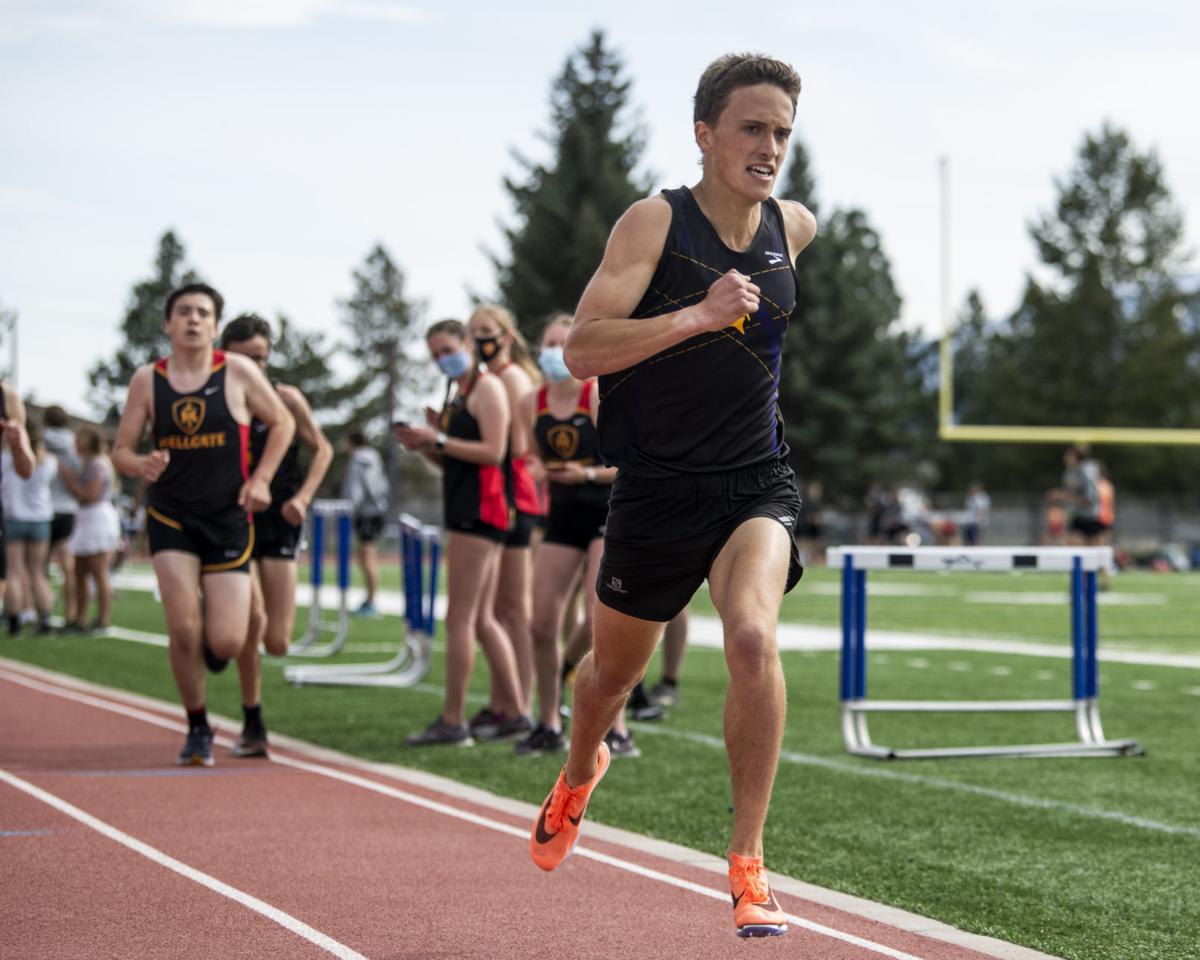 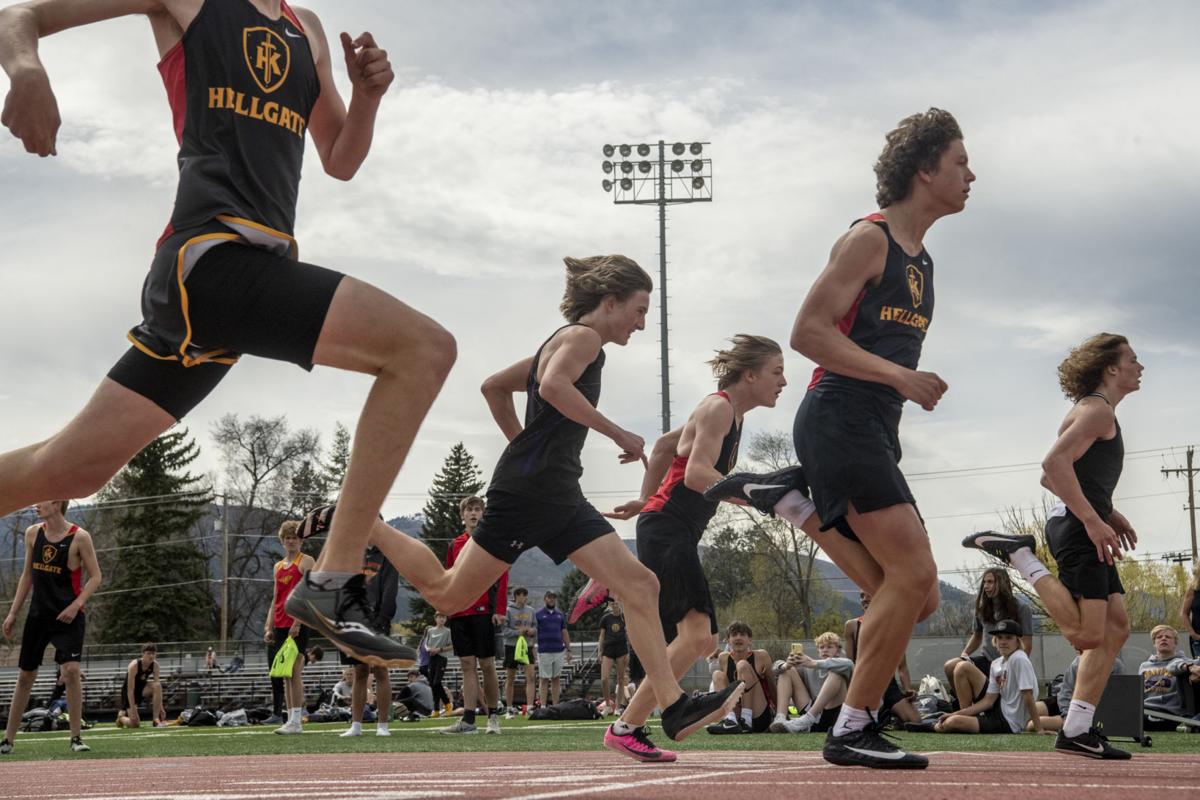 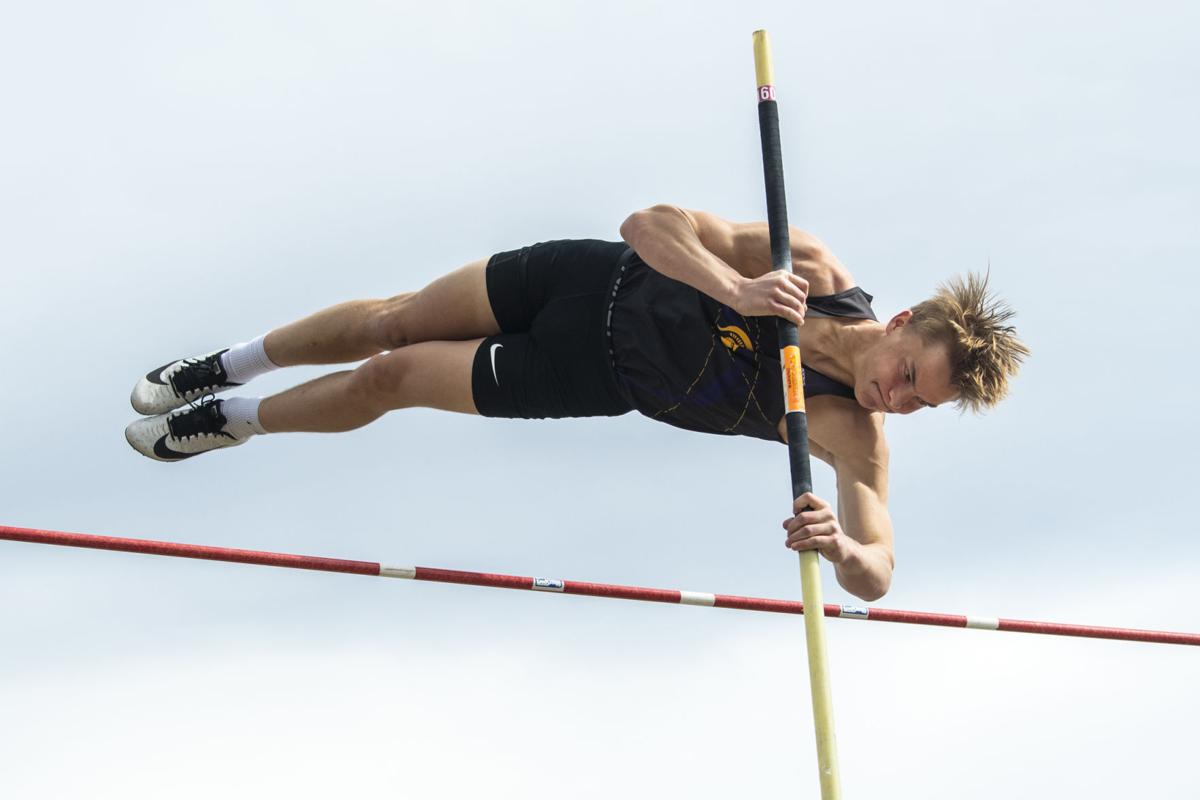 MISSOULA — Drew Klumph and Zac Crews have quite the fun competition going on in the 110-meter hurdles this spring.

Both juniors at Missoula Sentinel, Klumph took a 3-2 season lead on Crews as he edged him out for a victory on Friday afternoon at Missoula County Stadium. They’ve both finished first or second in their five head-to-head competitions in the event this spring, but this was the second time in four days that Klumph beat out Crews after they both posted personal-record times at the Western AA Top 10 meet on Tuesday.

The success for Klumph is kind of surprising even for himself given that he’s new to the 110 hurdles this season after having focused on the 300 hurdles in the past. Yet, he’s put together better and better outings and is ranked in the top five in the state regardless of classification in both events.

“I’m just a competitive person,” Klumph said during the crosstown meet against Missoula Hellgate on Friday. “I just like winning and competing with my friends. Going up against Zach, that competition just drives me to be better. I think that’s how our team is based and why we’re doing so well this year.”

The big change that’s helped Klumph is he’s grown about five inches since his freshman year and added size to his now-6-foot frame after having last year washed out by the pandemic. That growth has helped him knock 5.58 seconds off his best time in the 300 hurdles from his freshman year and helped him become even able to compete in the 110 hurdles after he couldn’t clear the 39-inch hurdles, which are 3 inches taller than the 36-inch ones used in the 300s, as a freshman.

“It was kind of a mental thing for me, more of a psychological thing,” Klumph said. “I was so small I couldn’t get over the big ones. So, yeah, I’m surprised how much better I’m doing this year compared to my freshman year. There’s a lot of adversity there, but I’m getting the hang of it.”

Klumph, like others on his team and around the state, had to get back to learning their events in a sense after not having competed in them since May 2019. He wasn't even sure how to lead practice drills at the start of the year for a hurdles group without a senior. At first, he was just focusing on finishing a race as he got back in track shape after playing cornerback on Sentinel’s football team that won state in the fall and playing junior varsity basketball in the winter.

Currently, Klumph is working with assistant coaches Dylan Reynolds and Kristy McElmurry to become more consistent with his time in between hurdles. That change helped him shave nearly two seconds off his personal-best time earlier this week.

As he continues to progress, he’ll focus more on the number of steps in between hurdles and being able to successfully lead over the hurdle with either leg in case a situation calls for it. He currently leads with his left leg because he’s more comfortable jumping off his right.

“He’s a really good runner, very strong, very competitive and very aggressive,” Reynolds said. “The biggest thing with the hurdles is being aggressive because you’re carrying a lot of speed. He can run through the hurdle in a straight line instead of being afraid and slowing down and going over. He carries his speed really well over the hurdle because he’s not afraid. He’s aggressive, there’s no fear.”

The top three 1600-meter runners in the state regardless of classification put on a show in what could be a preview of the State AA title race on the same course in four weeks.

Sentinel senior Wyatt Mortenson broke away on the final lap to claim a victory over teammate Tanner Klumph and Hellgate senior Ignatius Fitzgerald as they finished in that order, the same way they were in the state rankings coming into the race. Mortenson, a Utah Valley commit, finished in 4:27.54. Klumph, who took second at the 2020 state cross country meet, was second in 4:29.59. Fitzgerald, an Oregon commit, had a time of 4:34.33.

“That’s how the mile will be at that state course: You just got to be smart, you got to be patient, run it very similar to how we ran it today,” Mortenson said, noting that it wasn’t an ideal PR day because of the wind. “We all ran smart, it just kind of came down to who had a better last lap.”

The three of them were in second, third and fourth place through most of the first two laps as they shielded themselves from the wind behind a lead runner who decided to sprint out to an early lead. The three of them moved into first, second and third down the homestretch of the second lap and were tightly bunched before Mortenson made his move in the opening 25 meters of the final lap, taking a multiple-stride lead with 300 meters to go of the race.

“I knew when I got the lead that I had to really break them, and that’s what I did,” Mortenson said. “I put everything down that I had.”

All seven of Missoula Sentinel's runners from the fall 2020 state championship cross country team have come out for track and field this spring, giving the Spartans a boost they haven't had in recent years in the distance races.